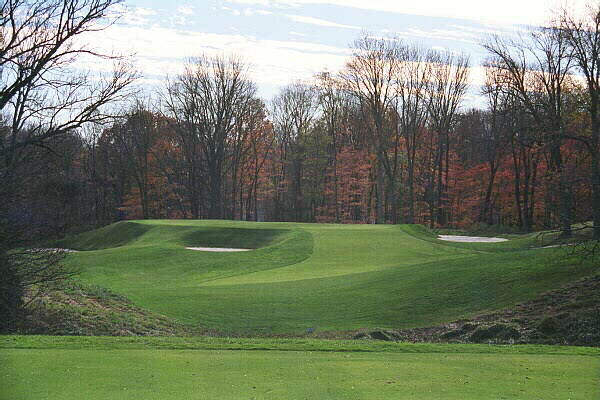 The excellence of Camargo’s one shot holes help separate the course in quality from most othersas evidenced here by the Eden 5th.

What golf course has the best collection of one shot holes?

Harbour Town is often bated around for such distinction but it lacks the key element of variety. For holes of various lengths that ask for a full range of shots, Cypress Point, Royal Melbourne (West), Shinnecock Hills, Merion and Pine Valley are the more obvious candidates. Obviously, these courses are among the greats and yet there is a lesser known gem that deserves to be included as well: Camargo Club located in the rolling countryside outside of Cincinnati, Ohio.

Sterling examples of each of Seth Raynor’s four favorite one shotters are found here. That Camargo possesses the finest Eden and Short hole in this country is a defensible argument. The Redan version as well is of alarming excellence with its perfectly canted green. Finally, to the authors at least, perhaps the finest of the bunch is its impressive Biarritz hole. The golfer will be asked to hit (roughly) a five iron, a three wood, an eight iron and a three iron into these four holes, so the balance is exemplary.

Given the advantage of four superlative short holes, Camargo was always destined to be a course apart. Supporting this cast is an admirable group of two shot holes. Four pars like the 3rd, 9th, 12th, 13th and 14th attack the valleys that run through the property in different manners. Some like the 3rd and 14th play across the valleys, others like the 9th are at an angle, and still others like the 12th and 13th fairways skirt around the top of the valley. Given this land movement, a lesser architect could have well botched the opportunity. Instead, Raynor’s inspired routing created holes of immense variety.

And speaking of property, there is a lot to talk about. The course today still occupies 260 acres. The worn out and often inaccurate statement of being oblivious to other games does indeed hold true at Camargo. Of course, with an average of 13,000 rounds a year, the course is not exactly overrun.

The course’s only weakness is one often found in Raynor’s work: par fives that are not bad but still somehow seem indifferent compared to the other holes.

4th hole, 455 yards; Perhaps the least offensive von Hagge bunkers dot the inside of this dogleg to the left. They serve as a general indication as to the flow of the hole. The prize of the hole goes to the absolutely enormous square green that measures over 12,000 sq. feet. It is bunkered either side but is completely open in front. One of the authors had overdone his tee shot and was behind a tree on the inside of the dogleg. Nonetheless, given what must be a 40 yard wide entrance to the green, he hit a massive hook that took the fairway perfectly and scampered well back into the green (the ensuing sad three putt doesn’t warrant narrative). This type of recovery shot is generally only associated with links holes but it serves as a stirring example of the kind of golf on offer at Camargo.

5th hole, 180 yards; This hole rivals the 11th at Fishers Island as the finest Eden Hole in the United States. The Club appreciates that the left bunker needs to be restored to a flat bottom, as opposed to its present slight upslope.

6th hole, 365 yards; In the 1959 qualifying rounds for the US Amateur, the 5th and 6th holes played the hardest on the course. The reason? Both greens were brick hard and the contestants were mule-headed enough to continue to throw the ball at the flag. The green here plays much like a Redan and the golfer needs to use the slope from the right to feed the ball down to the lower left hole locations. The other neat trick to this hole is that the flagstick, which is visible from the tee, actually represents the far left edge of the fairway. Contestants who unwittingly continued to adjust their stance to the flag often found themselves trying to hold the green from the rough – and that doesn’t work.

7th hole, 415 yards; A classic Alps/Punchbowl of the type rarely found on an inland course in the United States. Interestingly enough, in this version, the top half of the flag can be seen, and at Camargo that means something because a black and yellow checkered flag denotes back hole locations. Given the size of this 11,000 sq. ft. green, seeing the flag makes the shot a pleasing balance between skill and chance. 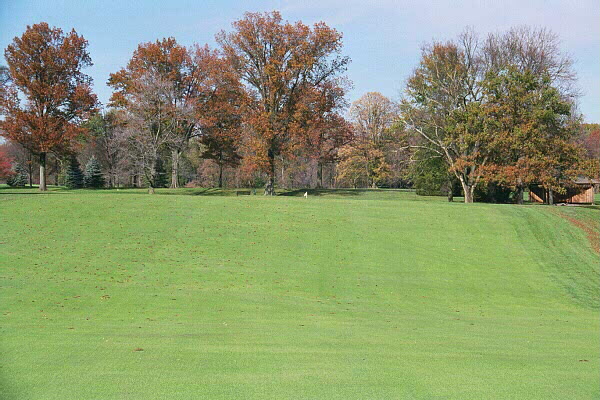 The tip of the white flag is barely visible on the approach to the 7th. 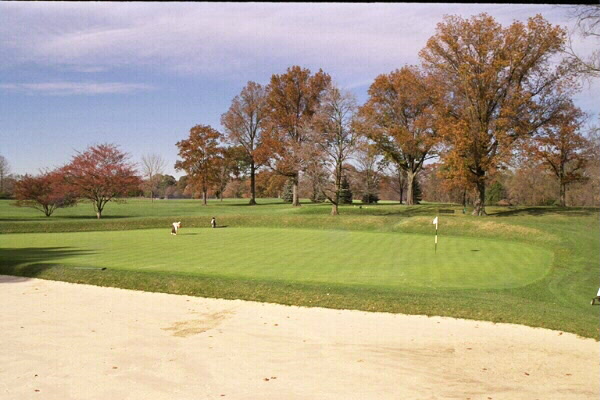 Hidden from view, the Sahara bunker fronts the 7th green.

8th hole, 225 yards; This superb Biarritz is over level land and plays the full measure of its yardage. The construction of it is amazing; where did Raynor get the fill to create the long green complex? Any recovery shot is guaranteed to excite and the sensation of hitting the green from the tee is perhaps the single shot on the course that would linger the longest. Of course, to find out, you first have to hit the green ¦.

11th hole,140 yards; A wonderful Short hole, in the same class with the 6th at National Golf Links of America and the 12th at Shoreacres. Though the property at Camargo has excellent movement throughout, there is no sense of great drama. And yet when the golfer steps to the tee on this hole, there is just such a moment. Though Raynor can be accused of having an ‘engineered’ style, this is another example where the authors have trouble picturing a style more suited to the terrain. The back right hole location in particular is a killer with death over and a tricky step in the green to contend with for any tee ball played safely into the middle of the green.

15th hole, 190 yards; The last of the excellent one shotters, this Redan features a neat twist in that the green has a spine that runs through it. 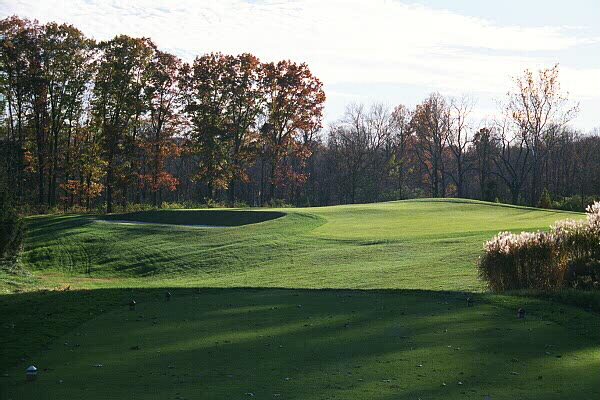 The right to left cant of the green is evident in this view from the 15th tee.

In judging Camargo, many people seem willing to overlook the von Hagge bunkers that are completely out of character on (in particular) a Seth Raynor course. If Doak and his Renaissance Design Firm were allowed to complete their restoration, then Camargo would indeed be worthy of the lofty praise associated with a course considered one of the fifty best in the world. However, until the restoration is complete, the authors feel a tinge of regret as to the slow progress.

Still, this old fashioned Club is on the right track and the Renaissance Design Firm’s success in restoring the greens to their original grandeur served as the model that Yeaman’s Hall pursued with such vigor and success in 1998. Camargo now has the obligation to pursue such a full scale, professional restoration. The result might rival The Golf Club as the finest course in the rich golf state of Ohio.