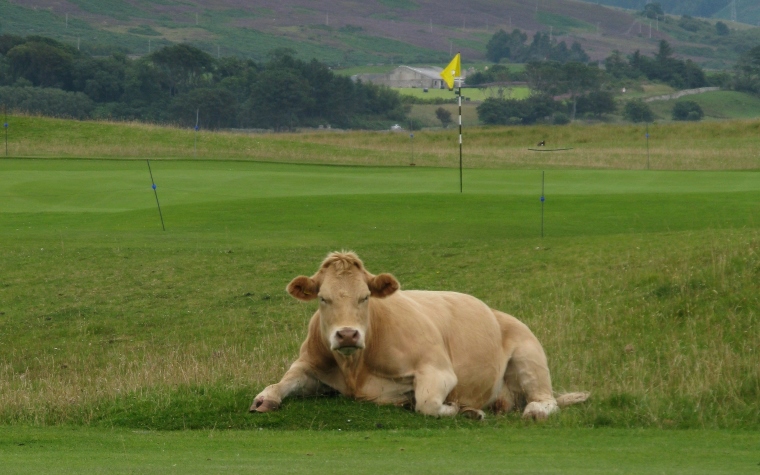 Though Brora is located on common ground, this links is anything but ordinary.

These days golf has become such a production — from building the course and clubhouse to the inane ceremony of having someone take your clubs from the car, arrange a cart and point you in the direction of the practice tee. Golf need not be so complicated and done properly is a simple, elegant affair. Brora is such a place and epitomizes how the magnificence of golf can endure. For well over a century golfing pilgrims have enjoyed the appeal of flighting a ball through the wind from uneven lies in a glorious, natural seaside setting.

Hard against the North Sea, Brora occupies some of the best humpy-bumpy linksland in all of golf. The property isn’t as dramatic as Royal County Down and its steep elevation changes or on the scale of Royal St. George’s. No, here the golfer is greeted by landforms that are human in scale and ideal for golf. The lack of hilliness makes Brora an easy 36 hole day. Sheep roam the course, necessitating electrical wire fencing around each green, but thanks to their efforts there isn’t an overabundance of rough  – and poking about for your lost ball is a rare occurrence. Overall,  Brora has a splendid unfinished primal look to it, and is all the better for it. Along with Macrihanish, Brancaster, Askernish and Westward Ho! it is among the author’s favorite course presentations. Golf and its holes should be part of the environment, not distinct from it.

For dullards who still insist on judging a course by its scorecard, Brora at first glance seems to lack sufficient challenge to lure a golfer back regularly. It is barely 6,200 yards from the back markers and as one of the staff of the nearby Carnegie Club at Skibo Castle sniffed, “It’s hardly real golf  if you can’t even lose a ball.” Upon closer inspection, par is a tight 70. There is only one five par on each side for the tiger to beat up and five two-shotters in excess of 425 yards. Throw in a couple of stout three pars and the wind (known to blow from time to time in northern Scotland!) and the good club golfer will have his hands full.

Still, statistics are the last thing Brora is about. The course has one attractive hole after another. The muscle is spread evenly (the 3rd, 5th, 10th, 11th, 15th and 17th) and while the 4th, 7th and 14th holes won’t win any prizes, the rest of the course is most appealing. In keeping with the course’s natural appearance, the bunkering is sparse but effective – there are no superfluous ones. Its architect James Braid made the first of his two visits to Brora in 1924. As was often the case, a short pre-1900 course tailored to the gutta-percha ball already existed. 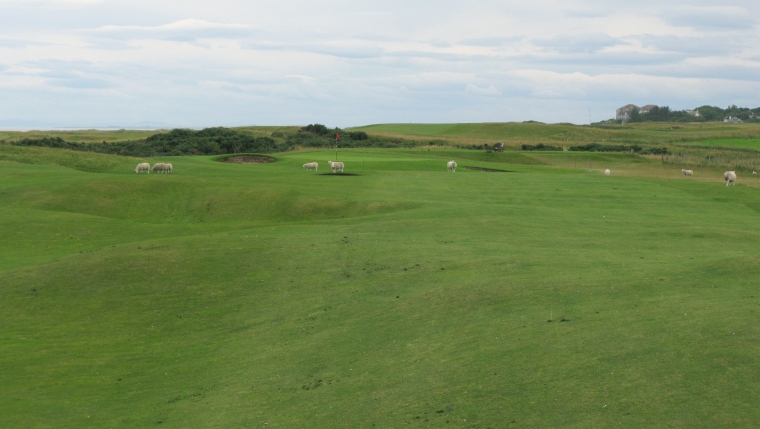 A crowded day at Brora: sheep grazing along the crumpled twelfth fairway.

To Braid’s credit he accomplished what most architects fail to: he made the holes away from the sea as interesting (probably more so) than the holes along the shoreline. How much better would Turnberry and Royal Aberdeen be if the same could be said?! Braid combined the rippling fairways with the out of bounds along the right side to create strategy that makes the golfer think. To learn more about James Braid the architect, please peruse Braid expert John Moreton’s August 2014 Feature Interview on GolfClubAtlas.com.

First hole, 295 yards, Ardassie; As is true for all courses (links or not), the quality of targets (i.e. the greens) goes a long way to determine the course’s enduring appeal. The diversity of green locations, from this one benched into the base of a dune to the exposed sixteenth perched high on a dune, is first rate. 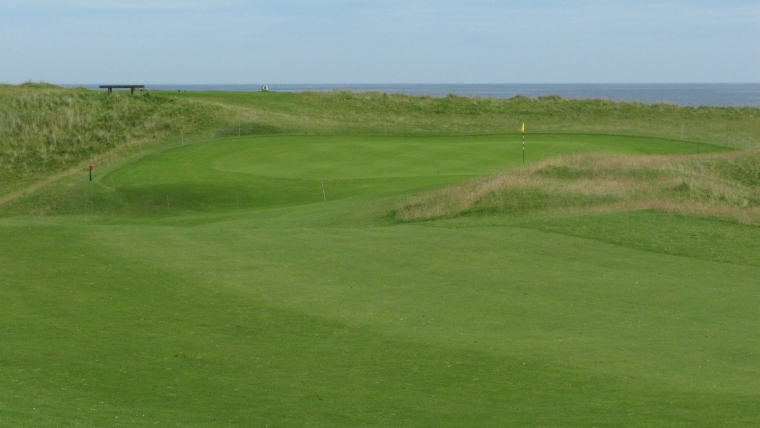 The attractive pitch to the sloping first green.

Fifth hole, 428 yards, Burn; The Clynelish burn that crosses the fairway 170 yards from the green ensures that even the longer hitter still requires a mid-iron approach to the wonderfully natural green tucked into the right-to-left slope of the hill. 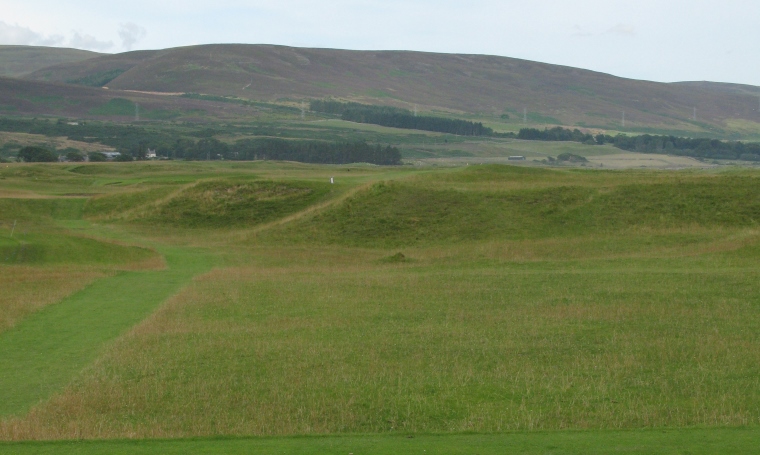 As seen from the tee, the fifth falls over some of the more rambunctious land forms. 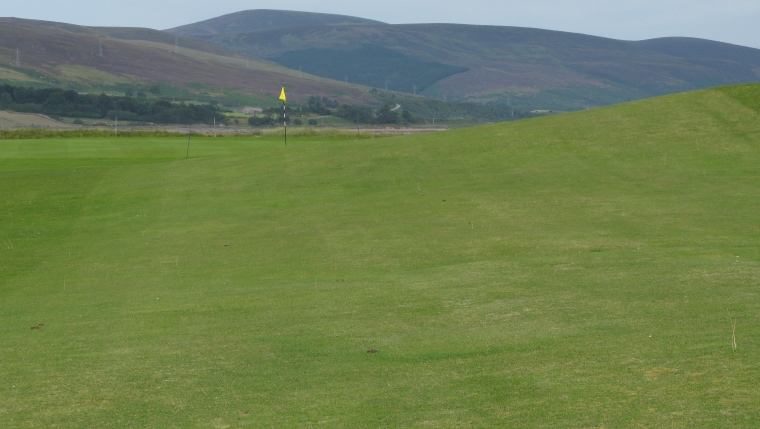 Judging how best to utilize the land around the fifth green is integral toward success.

Sixth hole, 175 yards, Witch; James Braid was a prolific architect yet, his body of work never obtained the reverence  that titan Golden Age architects Harry Colt and Alister MacKenzie received. Still, he always observed sound design principles, for instance, he laid all the one shotters here in different directions. One  thing is for sure: many people venture to the United Kingdom on golf trips that feature courses that are far less appealing than Braid’s best. Indeed, a journey to play his five finest (St. Enodoc, Pennaporth, The Kings Course at Gleneagles, his extensive remodel of Fraserborough and Brora) would be a very worthwhile effort to ensure enormous pleasure. The first one shotter turns inland and places in a westerly direction toward one of the more convoluted greens.

Eighth hole, 500 yards, Long;  The key to this outstanding strategic, gambling par five is the small cliff to the right of the hole over its last 150 yards and the bunker that eats into the left side of the green. A go for the green in two requires a bold shot over a sunken area (which, truth be told, is as horrible as it appears). The solitary bunker, left and short of the green does not allow the player to “sort of” go for the green. Braid must share the credit for this hole with the present golf committee who added the bunker around the turn of the 21st century. 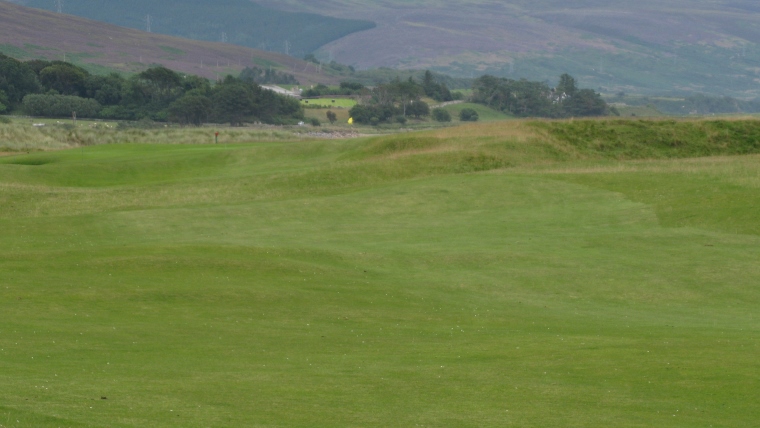 A beautifully routed hole, the reachable eighth requires the golfer to flight his second shot over an intimidating ridge line. Once the ball reaches the same upper level as the green, care needs to be taken that the land’s right to left tilt doesn’t whisk one’s ball into the front left bunker. which leaves the golfer the dreaded long explosion shot.

Ninth hole, 160 yards, Sea Hole; A good example of routing a hole toward the sea rather than along it. Indeed, the ninth is a rare example in links golf where the beach actually comes into play, especially for back hole locations. Kilspindie’s wonderful 8th is another  but few such carries exist in Scotland as tall dunes often separate the golf from the shoreline. Not here and Braid made the most of the opportunity. The ninth green, complete with sheep fence, lies hard by the shore.

Eleventh hole, 495 yards, Achrimsdale Burn;   Wild and rugged, save for the flagstick you would never know you were on a golf course. As such, it serves as a stark reminder how artificial 99.99% of the golf courses in the world are. Originally a long par 4, this hole was extended by 60 yards in 2013 to give the course its second par 5 – and raise Brora’s par to 70 (which the club felt would help attract additional outside play). Getting past the burn that is 100 yards shy of the green is a wind dependent event. Indeed, the varied ways in which Braid incorporated the burn throughout the layout is exemplary. Sometimes like here, its presence is amplified because the golfer doesn’t necessarily enjoy good optics on it and is forced to give it a wide berth. Twelfth hole, 360 yards, Dalchalm; A most thoughtful hole, a bunker left and out of bounds right pinch play into a crumpled area where level stances are anything but guaranteed. Add the green, one of the smallest targets on the course, and it is easy to see why the good local players treat this hole with great respect – and care. The twelfth is a highly admired sub 400 yard hole and highlights how deceiving it can be to judge a hole (or a course for that matter) by its length.

Thirteenth hole, 125 yards, Snake; Short iron one shotters in windy environments are always intriguing. They can even be quite fun depending on the state of one’s game! Named for the winding burn that cuts in front of the green, the thirteenth features a tiny green ringed by trouble. It is the only hole that plays in the easterly direction, so judging the wind and controlling one’s trajectory becomes paramount.

Suitable for a hole of such modest length, the green is ringed by peril.

Seventeenth hole, 430 yards, Tarbatness; Braid’s favorite is one of Scotland’s finest holes. The elevated tee on this big hole offers the best views of the course but the player still needs to concentrate because it’s the most difficult par at Brora. Into the wind, the fairway is uncharacteristically narrow and the drive must be fit between a hill on the right and bunkers left. The long approach is to a tightly protected, sloping green. It represents a very good hole for this stage of the match as it requires positive swings and does not allow the player to merely steer his way home. 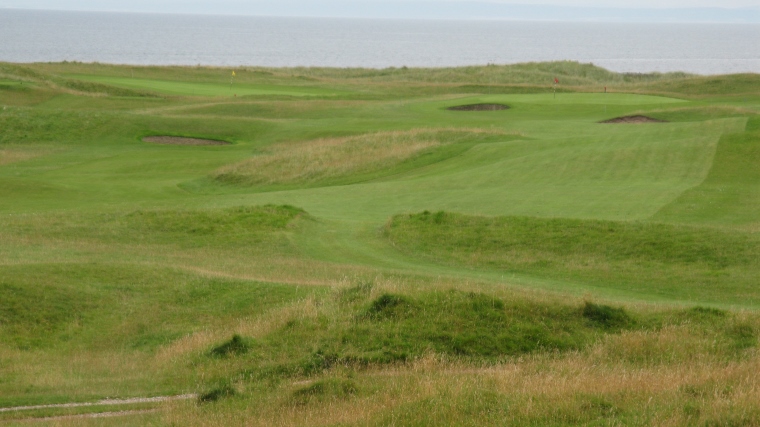 A fescue covered central hazard makes the magnificent seventeenth fairway a difficult target to find on a regular basis.

Eighteenth hole, 200 yards, Home Hole; The severe upslope at the front of the green fends off any half-hearted shots — only a full-blooded one will find the heart of the green. One of the charms of Brora is that the visitor usually does not realize until the drive home that he finished his round on a par three. The false front and steep slope have sent many a tee ball rolling back some thirty yards. Recovery from a tight lie at the base of the green is no bargain either.

Ronan Rafferty, the European tour player and lover of links golf and recent member at Brora, first played here in the early 1990s and found the course a sheer delight. He made suggestions for several new championship tee positions and it’s exciting that Brora does in fact have the land to add a couple hundred yards to the course should they ever so choose. Even as it stands today, the author must echo James Finnegan’s sentiments: it is one of our favorite dozen links in Scotland.

Unlike some of the more well-known courses, Brora is the real thing. You pull into the parking lot, pay your green fee, head to the first tee and off you go. Three hours after having navigated the sheep dung and electric fencing, you will be re-living your round with friends while enjoying a beer in the upstairs bar. Appreciating the tremendous views down the first and last few holes only reinforces that this is golf in its most enjoyable form.

The author thanks Andrew Simpson for the use of his photographs.