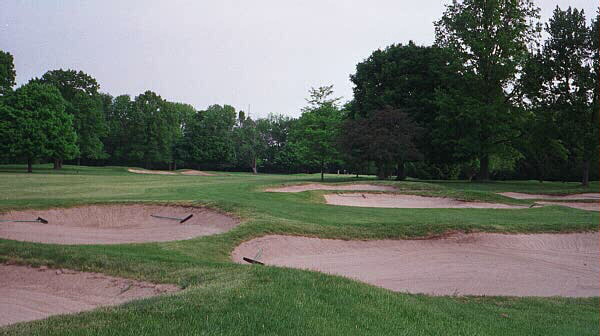 With 135 bunkers, Broadmoor is Ross’s most heavily bunkered inland course with which the authors are familiar.

Donald Ross has been called the first superstar of American golf. In fact, his work is so popluar that his courses often times play host toimportant golfevents in the middle and eastern portions of the United States. An unfortunateadjunct is that some of his finest designs including Oakland Hills, Scioto, Oak Hill, and Inverness have been tinkered withby lesser architects in an effort topresent a tougher, more modernchallenge in major events.

Other Ross courses like Hope Valley in North Carolina have lost some of their flair because the green pads have been allowed to shrink by as much as 6-8 feet around the edges and thusmany of the most vexing hole locations have been lost.

Broadmoor Country Club is in a different position from either scenario. Since its founding in 1922, the club has done an excellent job of retainingthe vast majority of the features with which Ross imbued the course. 135 of Ross’s 138 bunkers are still in play and are well preserved and though some of the corners of the green pads have been lost, the greens are still full of interest and challenge. An opportunity to play at Broadmoor equates to an opportunity to appreciatemany of Ross’s design strengths: his ability to produce a superior routing,his ability to build a course that isenjoyable for membership play one day and yet could host the U.S. Women’s Open the next, his ability to make bunkers so that they don’t appear as man-made contrivances,and his knack for producing fresh and imaginative green complexes.

However,what has been lost with time at Broadmoor are Ross’s corridors of play, which have been severely compromised underneath hundreds upon hundreds of hardwood trees. The player on numerous occasions can be in a bunker off the tee and have no shot but to chip out as directly between him and the flagare one or more trees. 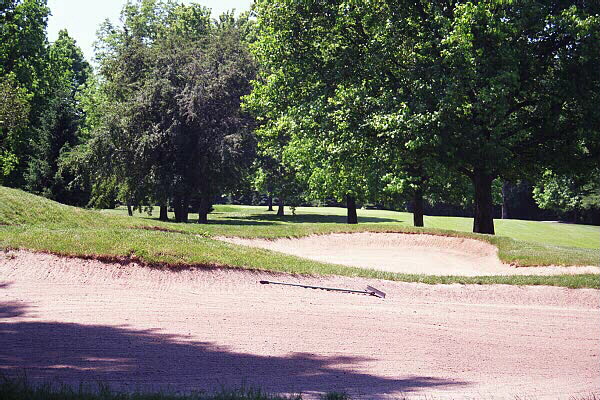 Ross did not believe in double penalizing the golfer and would be disappointed to see these trees blocking access to the 10th green from his fairway bunkers. 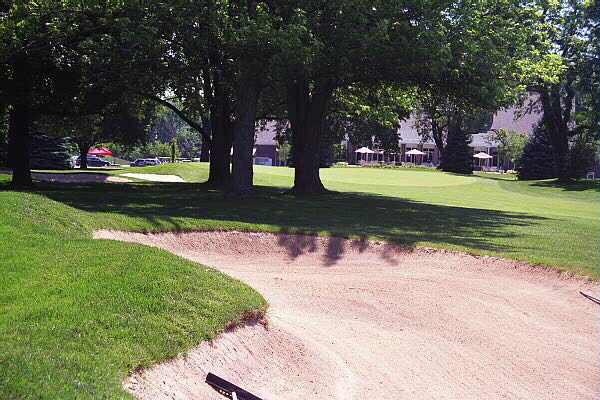 Same applies with this bunker which is found sixty yards shy of the 9th green. 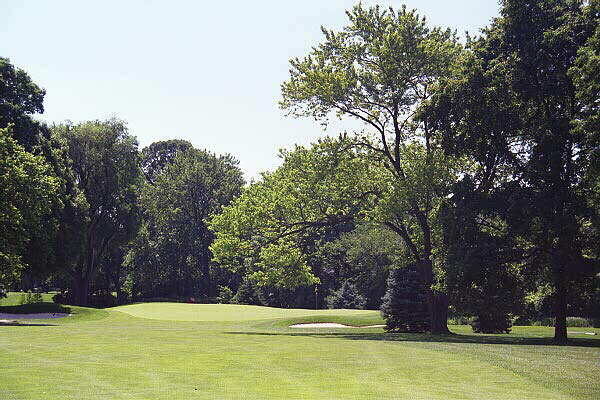 The bold contours of the 6th green are evident from here. Unfortunately, so are the trees that smother the approach.

This is a great shame. The design itself is inspired and makes the most of the gentle rolls found on this relatively flat 200 acre block of property on the outskirts of Indianapolis. Save for a few green pads and tees, the high to low point on the front nine is only six feet and yet, the golfer is never aware of that fact. Whether it is by a topped shot bunker as at the2nd hole or a nest of bunkers off the 3rd tee, Ross continually blocks the golfer from having a sustained view ofa flat fairway.

Just as important, the bunkers never look artificial, which is no mean feat when working on level property. Any architect can cut a bunker into a hillside and have it appear natural but to create bunkers from nothing is an underappreciated art form. 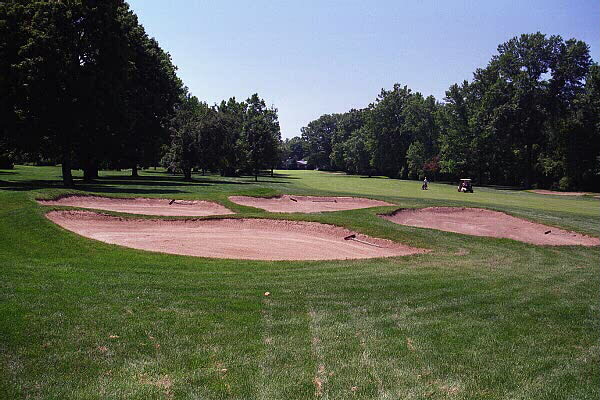 The bunkers catch the golfer’s eye more so than the flat fairway.

Ross always let the topography dictate the placement of his green sites. Sometimes, like at Charles River Country Club outside of Boston where he routed the course over and around rock ledges, the land forced Ross into accepting an unconventional string of ‘pars.’ For instance, from the 9th through the 17thholes at Charles River, par is 3-5-3-short 4-short 4-3-5-5-3. The holes work beautifully together nonetheless as they are natural in appearance and highly diverse.

However, here ina stateknown for its flat cornfields, Ross had far fewerrestrictions placed on him. And with the land yielding only minimal interest, Ross created a number of very fine holes, thanks to some excellent bunkering schemes and imaginative greens, as seen below.

First hole and 2nd hole, 435 and 410 yards, respectively; Not exactly the quintessential Ross ‘handshake’ start, the golfer is reminded of the expression at Wannamoisett of not getting discouraged during the first couple of holes but to hang in there. The tough start coupled with the profusion of bunkers around the course are clear indications that the founders of Broadmoorwere intent on Ross building them a first rate course. 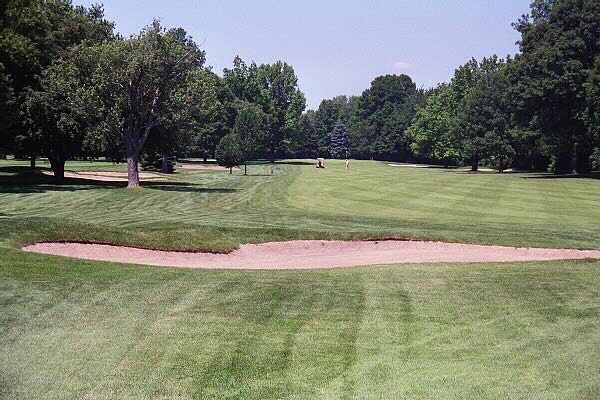 This picture captures the srengths and weaknesses of Broadmoor. Its strength is that it has retained all but three of Ross’s original bunkers including this ‘topped shot’ bunker 100 yards off the 2nd tee. Its weakness is how the trees have encroached into Ross’s intended corridor of play as seen by the bunkers buried underneath the trees on the left and the right.

Forth hole, 145 yards; Afine use of one of the property’s few natural features as a diagonal hazard. A ball that hits on the right edge of the green is likely to be shunted into the stream. Though Pinehurst No.2 will always be recognized as Ross’s finest course onpredominantly flat property, Broadmoorshould also be recognizedas a superior designas it createsloads of interest on propertywhere there waslittle prior to the architect’s talented work. 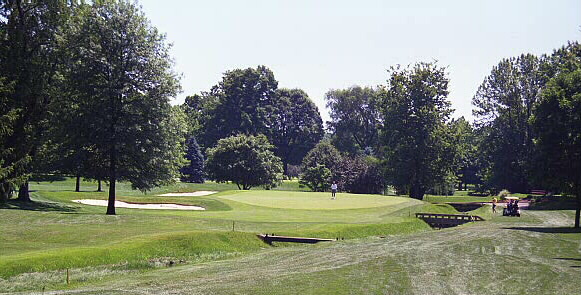 The 4th calls for an exact shot, which is not unreasonable for a hole of modest length.

Fifth hole, 435 yards; Rossplaced an attractivebunker complexon the the inside of this dogleg to the right, and each player has a choice to make as to his correct line of play vs. his ability. Also, just like with the other longest two shotter on the course (the 1st hole), the weaker golfer is never made to feel inadequate as the green is open in front and can accomodate a running approach from well back in the fairway. 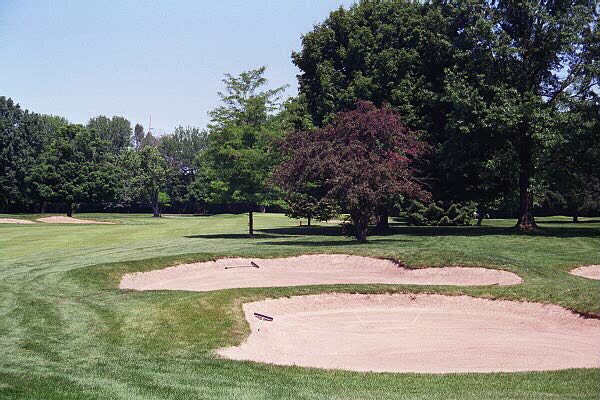 The angles of play on the dogleg 5th have been severely compromised because of tree growth on the inside of the dogleg.

Twelfth hole, 480 yards; To view this as a weak par five is to miss the point. In fact, it is the start of the best four hole stretch on the course with Ross perfectly draping the hole across the most rolling terrain of the property. First, there is a seven foot dip in the fairway at the 240 yard mark and the better player is keen to hit it and see his tee ball propelled another 15 yards closer to the green. The built-up, sloping greenreadily turns two shots into three.

Thirteenth hole, 370 yards; With few natural obstacles to work around, Ross was free to create interesting angles of play where he saw fit. In this case, the hole plays like an ‘X’ thanks to the green which is much wider than it is deep with each side higher than the middle.When the hole is located on the right of the gull wing green, the golfer wants to position his tee ball near the inside of the bunkers on the dogleg left. However, when the hole is located on the left , the golferis better to position his tee ball to the outside of the dogleg, and thus avoid flirting with the left hand greenside bunker. 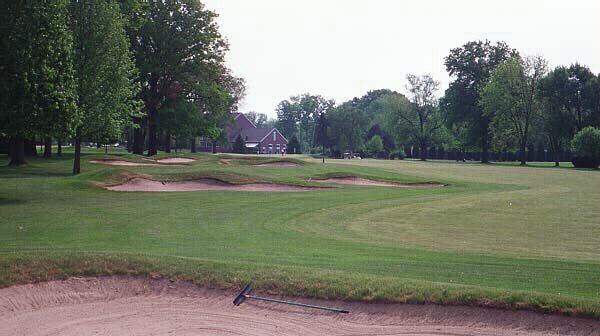 The 13th swings left around this cluster of bunkers to a gull wing shaped green.

Fourteenth hole, 400 yards; The same stream that Ross utilized at the one shot 4th bisects this fairway 100 yards short of the green. The real issue is the green which almost seems to cascade down a hillside. With a dramatic back to front drop, the golfer almost thinks that he is at the famous 8th green at French Lick! 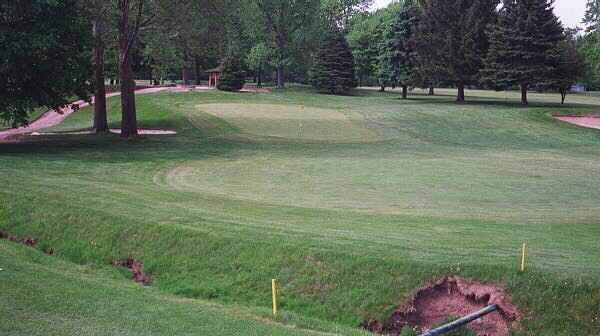 The unique 14th green features a six foot back to front drop and is a narrow 25 feet across in the front. Unfortunately, two massive sycamores are at the left front of the green, one of whose canopy overhangs the green.

Fifteenth hole, 155 yards; Given that it is much easier to capture bunkers than interesting green contours in photographs, this site canbe guiltyofdrawing too much attention to bunkers as opposed to the more engaging aspect of green contours. Such is the case with Broadmoor, where greens like the 3rd, the two tiered 15th and the 17th greenare highly unique greens among the 900 some greens that bear Ross’s name as architect – however, you try capturingsuch greenson film! 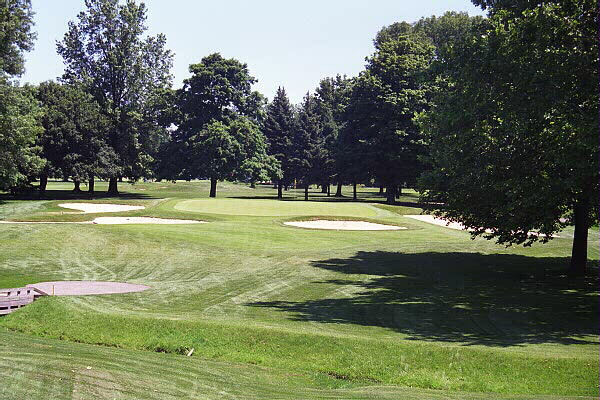 The one shot 15th plays parallels the 14th and Ross located a wild two tiered green on the far side of a valley.

As good as Broadmoor is, it is not without a design flaw. As found on many Ross courses designed in the 1920s, the two finishing holes on each ninereturn to the clubhouse. However, unlike another Ross course in the Hoosier State (French Lick), these holes are not among the best on the course. Still, as reachable par fives, they generate their ownsort of excitement.

The current board at Broadmoor has recognized that the corridors of play have shrunk well beyond Ross’s intentand has hired Tom Doak’s Renaissance Firm to remedy the situation. Hopefully, the board will fully back Doak’s Master Plan, which will undoubtedly call for the return to wide playing corridors. Also, in Sam MacKenzie, Broadmoor is fortunate to have a Green Keeper who is alongadmirer of Ross’s workandhewill further help toensure that the course is presentedfor play as Ross intended.When complete, this restoration project willturn Broadmoor into a true delight to play while setting a powerful lead for other Ross clubs and their boards to follow.