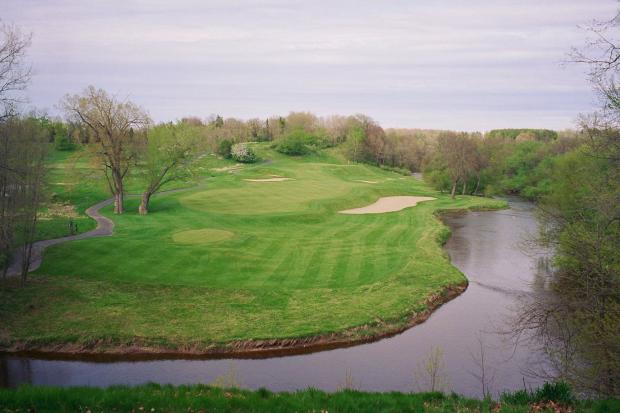 Pete Dye had a thrilling landscape blessed with natural hazards with which to work at Blackwolf Run.

Resort course were once looked upon with indifference by the student of course design – they were average courses with one or two postcard holes with the others sandwiched between condominiums. Around 1982 with the creation of the TPC Course at Sawgrass, a number of world class courses (the words are chosen carefully) have opened that are available to the public. The two courses at Blackwolf Run in Kohler, Wisconsin are examples of this phenomenon.

To play golf at The American Club’s Blackwolf Run is to enjoy golf of the highest order, resort or otherwise. A player may walk and carry his bag; there are NO houses or condominiums; the courses are kept in immaculate condition; there are no indifferent holes as the best land was used for the courses; there are four sets of tees, ensuring that everyone can play the course at an accommodating length; and the coursesare thoroughly challenging (to say the least!).

The River course (which will be discussed here, although Meadow Valleys is quite good and will beprofiled later) features a characteristic from the Golden Years of course design: the holes becoming progressively more difficult as the player gets closer to the hole. The player has plenty of room off the tee; he should bring his ‘big’ game to Blackwolf Run, as the driver is a fundamental club. Playing courses that don’t keep the driver out of the player’s hands is always very refreshing.

Once the player arrives at the greens, the real fun begins. Many who only play the course once or twice and don’t take time to get to know the course, claim the greens are too severe. Upon closer examination, there are only a few (less than five) possible hole locations (e.g., front-left on the 5th) on the entire course where three-putting from less than fifteen feet is a realistic fear. The actual difficulty with the greens comes into play where the approach shot is well wide of the hole. Pete Dye correctly thinks a player should have to do something special to get down in two from 40 feet. Dye has simply re-introduced what strangely seems to be a novel concept – that two-putting from afar can be a real achievement, similar to getting down in two from a bunker. 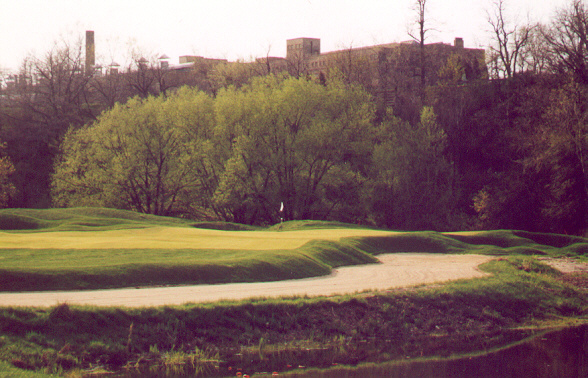 Kohler is a company town, with the Kohler factory visible above and far beyond the green of the long one-shot 10th.

An interesting requirement of the River course is that a player needs to visualize the flight of his shots. Solitary trees (e.g., 11, 16) or groups of trees (e.g., 9, 13) demand that the player know how high he can hit his irons (or woods) at a certain distance. With the 11th hole, for example, the player faces a tree on the edge of the river at exactly the line he would like for his second shot. Should he now play a longer club to the right of the tree (and toward the water more), play a shorter club to the left (and have a longer third shot) or play the ball over the tree? How many players are used to estimating the height of a 4-wood when it is 180 yards away? Again, Dye is making the player do something for which he is not in the habit.

Dye himself was mightily impressed by the drivable 9th because of all the options it afford you off the tee; however, such is thestrength of the course that the authors more prefer half a dozen holes, as we see below:

First hole, 550 yards; The River course deserves credit in particular for one feature:one of the two or threefinest collection of four par five holes in the country. Think about it: the 1st along the bluffs of the Sheboygan River , the high alpine adventure of the 8th, the 11th with the river on the right, and 16th with the river on the left this time. Each shot is of great distinction and merit on all four holes – the player feels he is in a chess game as he tacts down the fairways, re-evaluating his options with each shot. This course confirms Pete Dye as the master of designingthree shot holes, a trait he shares with few architects. 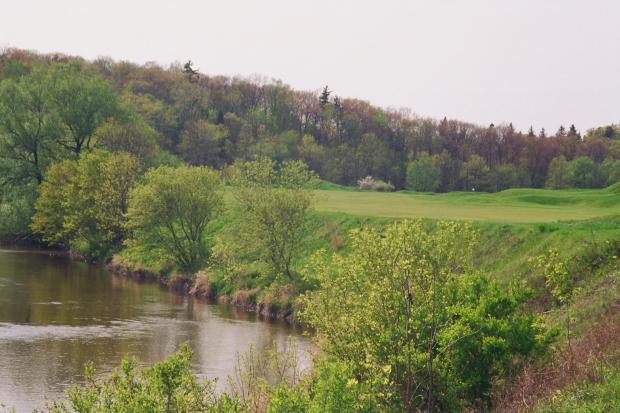 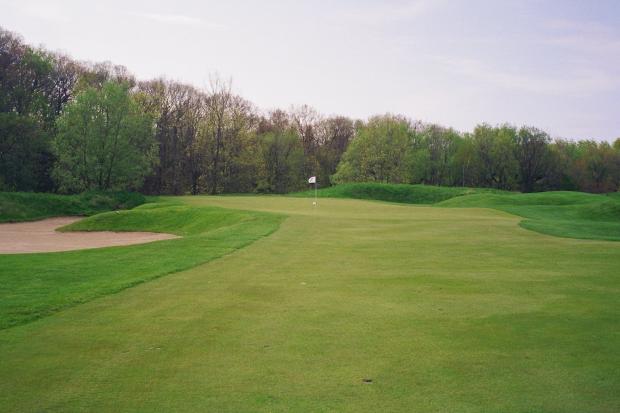 Like many green complexes here, the 1st is angled in relation to the fairway and is open in front.

Forth hole, 185 yards; At first glance, this hole appears to be just another variation of the standard water par three, but there is much more to the hole. The ridge that obscures the left side of the green from the tee and the green contouring makes the hole. Afine example of a bail-out area – a player who plays to the left, away from the water, takes 5 out of the equation as well as, more times than not, 3 because of the green’s clever contours. 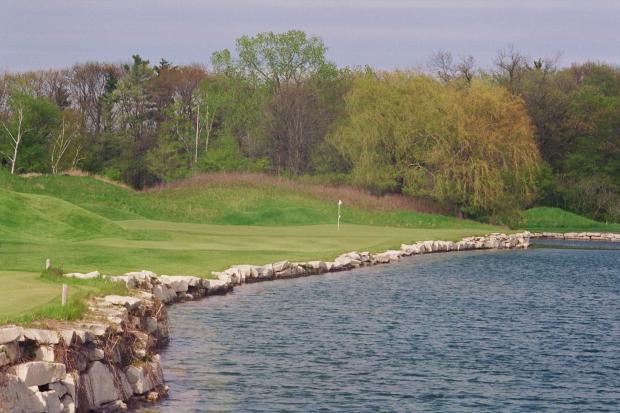 The difficulties on and around the 4th green are not readily apparent from the tee.

Fifth hole, 405 yards; From the elevated tee, the golfer’s eye is naturally drawn down the river which parallels the right side of the 5th fairway. However, in this case, the river really shouldn’t be in play as the best line off the tee isalways down theleft of the fairway. Only from such a spot can the golfer best access the green which is angled from left to right. 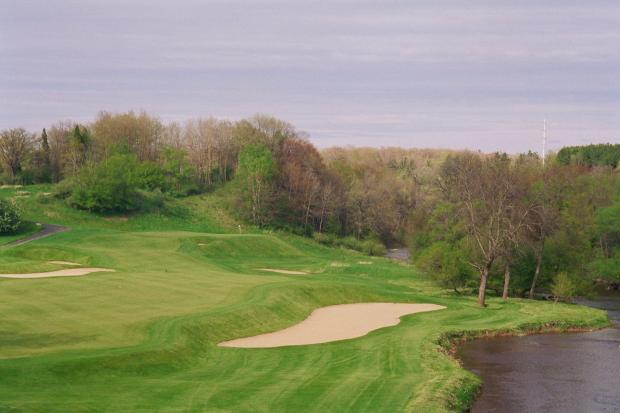 Pete Dye benched the 5th green against the far hillside. The ideal line off the tee is toward the left bunker, well away from the river. 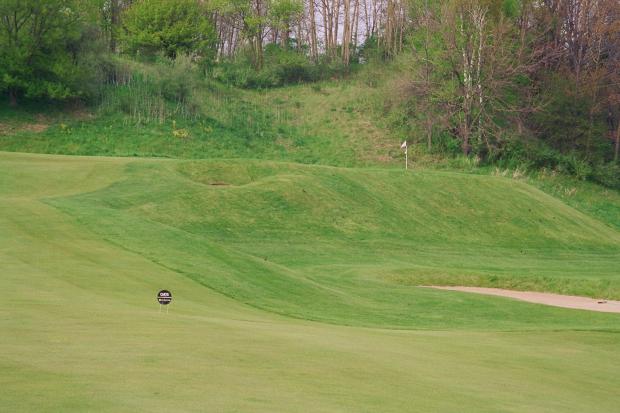 Judging the approach shot is difficult as the green is some 25 feet above the fairway. To chase after this back right hole location is foolhardy.

8th hole, 510 yards; An exhilarating tee shot, with plenty of strategic merit as well. From a tee perchedwell above the fairway, the player has plenty of room to let out the shaft as the fairway (which seems miles away) is ample, but to reach the green in two (a realistic proposition) he must go over the corner of this dogleg right. The approach is to a nicely rolling green, with a drop-off on the lower left side. The one quibble the authors have is that the right fairway near the green levels off and does not encourage a nice, sweeping hook to bounce into the green. With a bit more right-to-left slope, the shot would be most enjoyable as it ‘fits’ the eye so well. 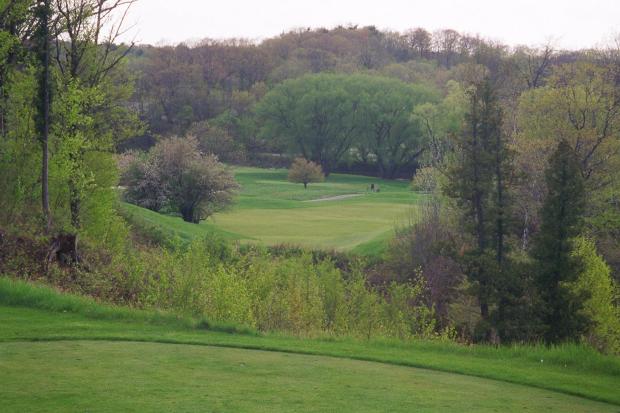 What a wonderful time to get a good drive away! 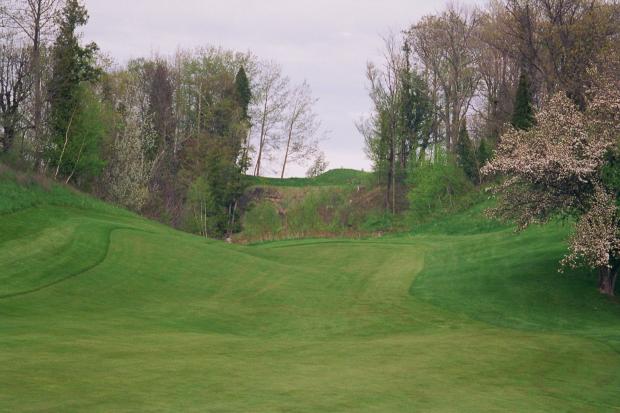 The view from the 8th fairway back up to the tee indicates just how far downhill the tee ball is. 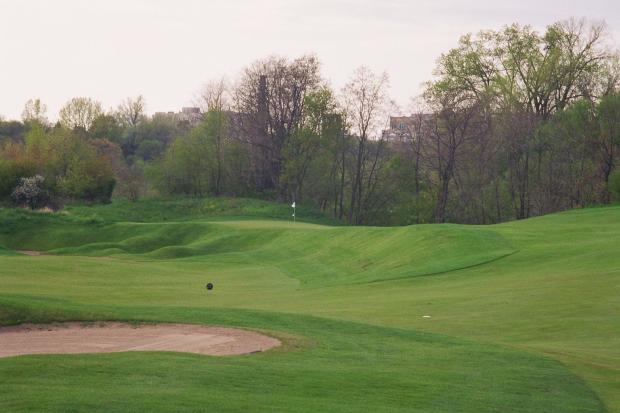 Taking the route of the upper fairway is the best way to reach the 8th in two.

Ninth hole, 330 yards; The short two-shot 9th, which can be played several ways, is one of the architect’s all-time favorites. 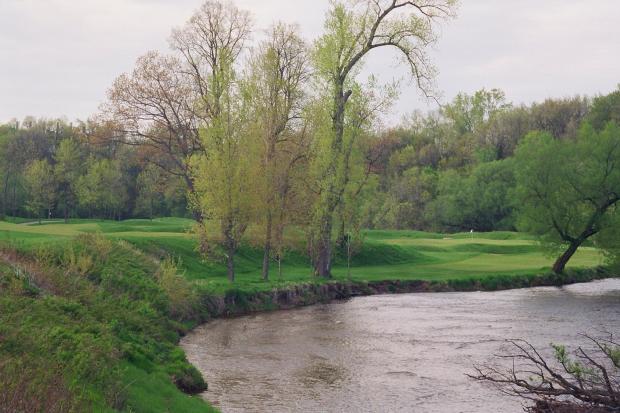 Should the golfer go left of the trees or straight at the 9th green? 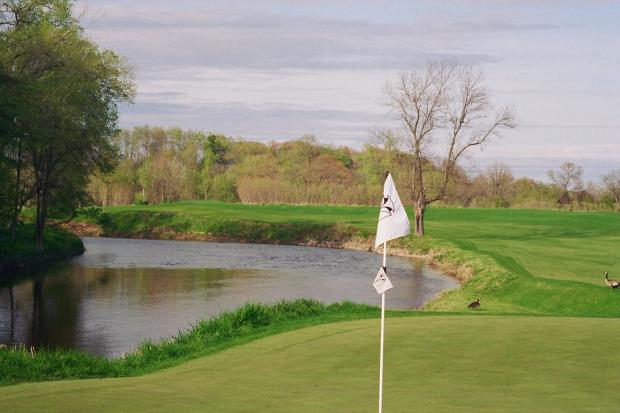 From behind the 11th with the key tree for the second in the background.

Twelfth hole, 435 yards; The author’s favorite hole on the course, this bigtwo shotter offers two distinct routes off the tee — a safe shot down the right (which would leave almost no chance to reach the green in two) or an attacking drive over the water on the left (about a 220 yard carry). Sharp fairway bunkers beyond the water force the player to make a choice between left and right – he cannot ‘sort of’ go left, or he will be pitching the ball out of the bunker with his sand iron. The approach from the left side opens the green that is set flush against the Sheboygan River. 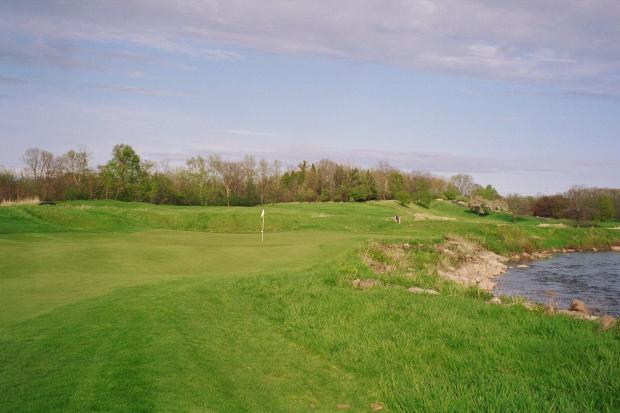 Thirteenth hole, 195 yards; The first time golfer stands on the tee and may think this hole is a hoax: a long one shotter over the river (which continues to wrap around the right side of the green) with trees encroaching from the left. Is the only play to throw a long-iron or fairway wood out to the right, over the river, and hope that it will hook back onto the green? In practice, though, this hole is more straightforward – again, the player must take the time to get to know the course. Intimidating as those trees on the left are, a player can comfortably clear them with a 3-iron. The other interesting part of the hole is that the player is so preoccupied with the water short and to the right and the trees on the left that he forgets about the two greenside bunkers to the left that see more than their share of action. 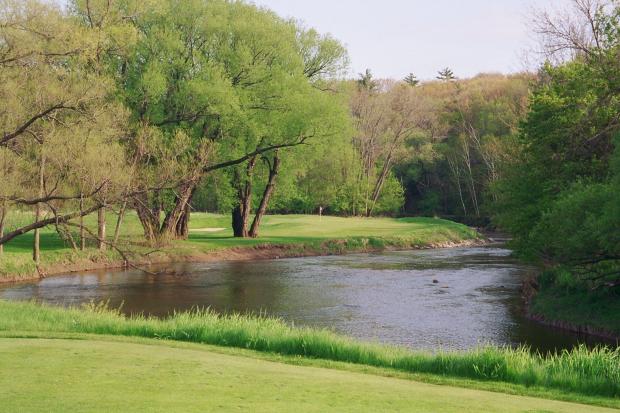 The intimidating tee shot at the one shot 13th.

14th hole, 310 yards; A strategic, if manufactured, hole. The tee shot is a version of the Cape, only with probably a long-iron or fairway wood (or you could be like Steve Elkington and Ernie Els and just go after the green with a driver!). The closer one plays to the water, the more one can see of the green and the more straightforward approach he will have, for there is a large berm that juts in from the left at the 70 yard mark that hides the view of the green from the left side of the fairway. What, then, is so bad with having a blind approach for a pitch shot? Why risk the water just to see the green? The main reason is not the visibility but the front-left bunker that comes very much in play for an approach from the left and the player is pitching more toward the water with his second. 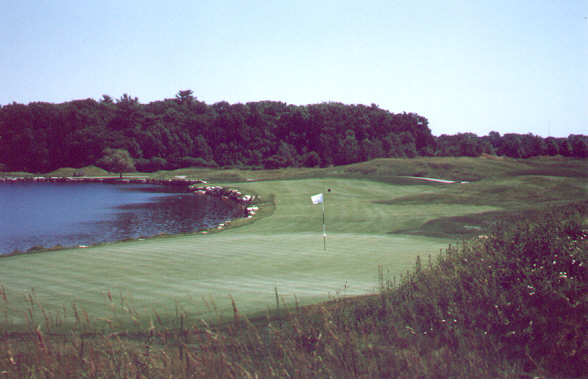 The mound some 80 yards shy of the 14th green is visible away from the water. 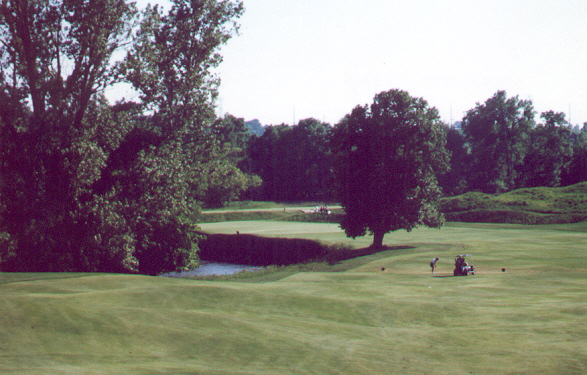 The view of the 16th after a good tee shot and the tree and Sheboygan River that dominate the second and third shots.

Seventeenth, 170 yards; A terrific example of the merits of an angled green. Again, plenty of room to the right to play away from the water, but with little chance of making a three. When the hole is all the way in the back of the long green and the player takes enough club to reach the hole but, just before impact, has second thoughts and decides to bail slightly to the right, he is in real trouble. With an angled green such as this one, there is a correct line for a certain club, and that line varies with each club. With a short club the line is to the right, but with a long club the line is left. The player must make up his mind and play decisively.

This is the kind of golf that the authors find mesmerizing because the course makesone think. The more decisiveone is, the betterone’s chances. As you play it more, you begin to appreciate the numerous risk reward options. You place yourself less and less in those dreaded three putt zones, you appreciate when to attack and when to be conservative. A typical round will include a couple of birdies but just as many double bogeys or worse. As a match play course, without card and pencil in hand, the player is at liberty to enjoy the temptations of this excellent design. Just make sure you take the time to get to know it. 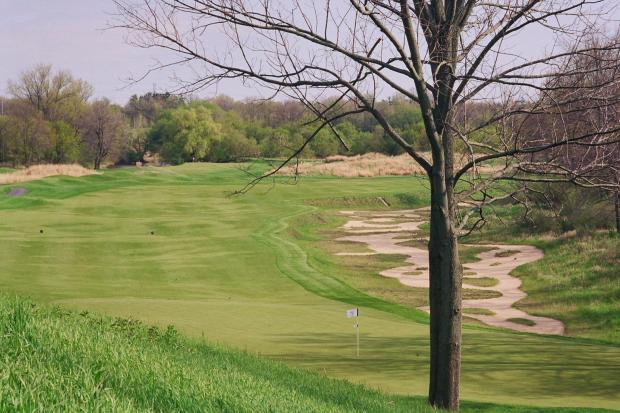 Flooded to form a lateral water hazard for the 1998 U.S. Women’s Open, the area left of the 18th has now been formalized into a bunker.