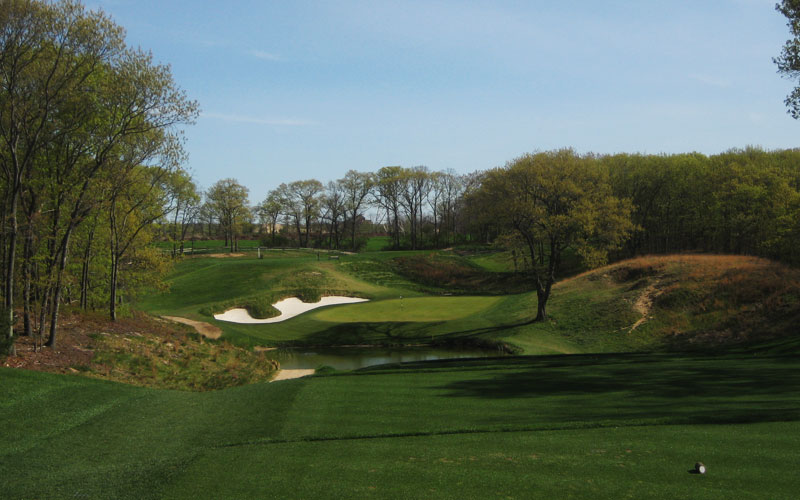 A.W. Tillinghast brilliantly routed The Black Course over a rugged piece of rolling property on Long Island. Only walking is permitted.

If the owners told Tillinghast to give them a man sized course at Winged Foot, what must have been his marching orders when he was commissioned to build the Black Course at Bethpage State Park?!

The answer is the Long Island Park Commission wanted A. W. Tillinghast to build something that “might compare with Pine Valley as a great test.” That request is not as silly as it sounds, because at Bethpage, Tillinghast was given dramatic sandy property with which to work.

Set on an immense sprawling acreage, this course has retained an expansiveness to it that would no doubt please the architect more than the fate of some of his other courses. Tillinghast would be mortified by the overgrowth of Winged Footprior to its successful 2000-2002tree removal programand the effect a highway had on his back nine at San Francisco (just look at an old picture of the superb 14th green to appreciate how much). Yet today, the Black Course is as Tillinghast intended: a course to challenge the finest, as was evidencedthroughoutthe 2002 U.S. Open.

Some modern courses, like Oak Tree, lose a sense of continuity in their quest for difficulty.Such modern courses feel fragmented, as you go from one impossible hole to the next. One of the lasting appeals of Bethpage is that the holes seem to be effortlessly cut from the same fabric, with one sound hole following another. Though the green contouring isbland relativeto his work at Somerset Hills, Fenway, andWinged Foot, the quality of each hole remains amazingly high. Still, it’s a pity that Joe Burbeck finished the Black Course as opposed to Tillinghast and his own men. With more around the green interest and better finishing touches, Bethpage would likely be Tillinghast’s finest course.

Even with greens that lack Tillinghast’s usual character, what are the indifferent holes at Bethpage? Relatively speaking, some people might point to the second holeand of course the newly modified 18th but other than that, is there a hole that onewould even consider mentioning? Not to the author. Even the hardest two holes (the 12th and 15th) don’t readily appeal as much as a host of other holes. The fundamental challenge of these broad shouldered holes coupled with the undiluted walk through nature on Long Island makes Bethpage worthy of many repeat visits.

As an examination in driving, this courseis Tillinghast’s masterpiece. The corridor of fairways is wide, even for Tillinghast- there is plenty of space to play golf. The fairway bunkering, with all respect to San Francisco, is his finest, both for variety and scale. The monstrous Glacier bunker cutting across the fourth fairway, the diagonal bunkers on the fifth and seventh holes, the gigantic bunker on the 12th, the cross bunker 40 yards short of the 13th green that creates an optical illusion, all these bunkers are of a heroic scale befitting the property. 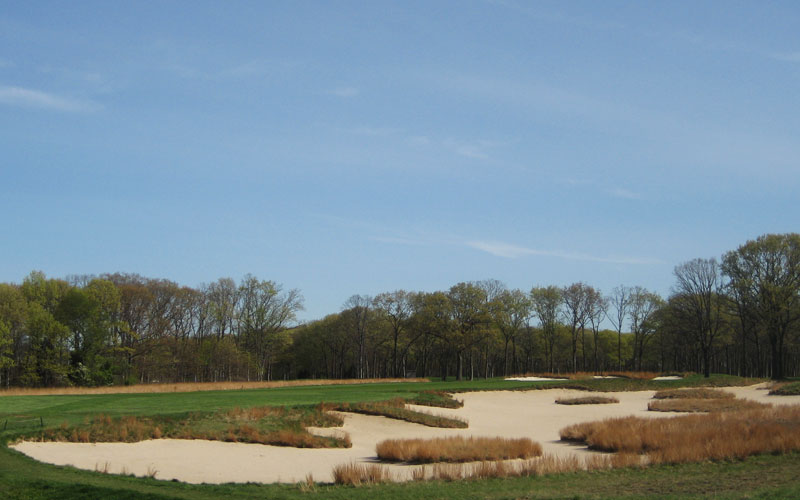 The seventh hole highlights Tillinghast’s well conceived use of bunkering. If the golfer hopes to reach the par five green in two, he must attempt the longest carry, which is over the bunker’s right side.

Tillinghast’s work at Bethpage serves as a thesis on how-to bunker a course.The bunkers also bring back the notion that a player will be penalized for finding the sand.Many of the greenside bunkers are big, with slopes down to their bottom.A player who just misses the green will often find his ball in the middle of a large bunker, some ten yards from the edge of the green and something like twenty yards from the hole – far from a straightforward up-and-down.

The most striking feature of the Black Course is its grand scale. Everything, from the distance to the bunkering to the fairway widths, is huge. One accomplished female player, who is six feet in height, remarked while walking down thetwelfth fairway how tiny she felt. While standing in the middle of a huge bunker armed with only a sand wedge, the player can feel small indeed. 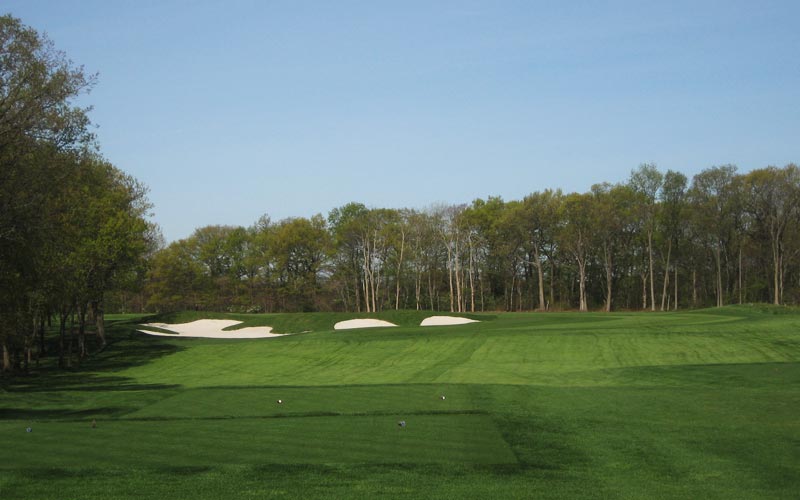 The bunkers, like this massive 40 yard long one off the twelfth tee, can dwarf the player.

Tillinghast in particular would like the sign near the first tee: “The Black Course is an extremely difficult course which we recommend only for highly skilled golfers” – golf’s equivalent of a triple black diamond course.

Fourthhole, 530 yards; The author’s favourite Tillinghast par five, a shade better than Fenway’s third hole, and perhaps the finestthree shotter in the north east of the United States. Tillinghast was mightily impressed by this hole: “It should prove one of the most exacting three-shotters I know of anywhere. In locating and designing the green, which can only be gained by a most precise approach from the right, I must confess that I was a trifle scared myself, when I looked back and regarded the hazardous route that must be taken by a stinging second shot to get into position to attack the green.”At the2002 U.S. Open,Phil Mickelson’s potential fourth round chargestalledwhen he missed thegreen in two in the wrong spot as opposed to relying on a straightforward up and down from the open right side of the green. 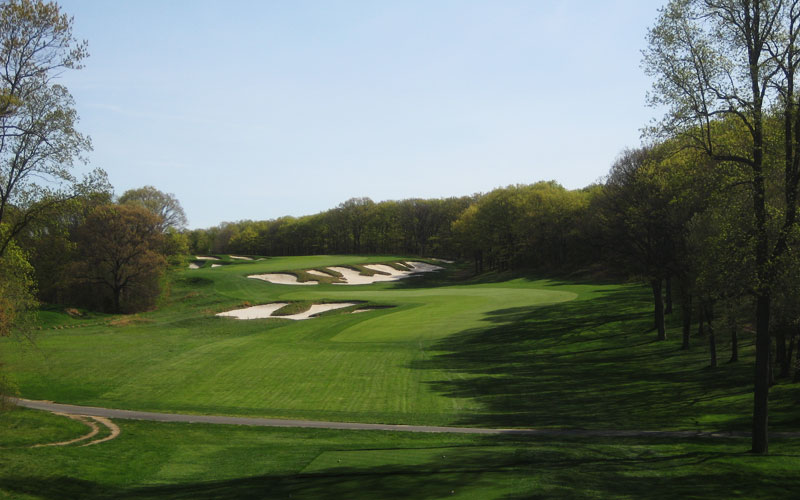 The strategic qualities of the fourth make it a great favorite. If the golfer can place his tee ball near the first bunker as seen above, he has a chance to go for the green in two.

Fifthhole, 445 yards; The classic use of a diagonal hazard. The fairway is off set to both the tee and green. The ideal tee shot is a power fade across the waste bunker on the right. From there, a draw will best find the elevated target but the shallow green is adept at allowing only the well hit ball to hold. Pete Dye especially appreciated the merit of asking the golfer to shape his shots both way on the same hole and he would later build numerous such holes. 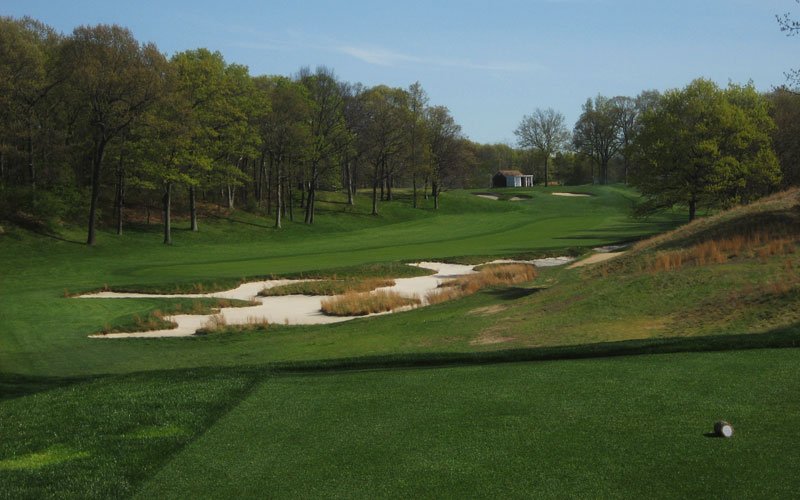 The bunker off the fifth tee is one of the game’s great diagonal hazards.

Tenthhole, 470 yards; The Black Course was built at the end of Tillinghast’s career and as such, he had seenhow the game was evolving fromchanges in technology. Perhaps for this reason, Tillinghastplaced an unusual emphasison aerial approach shots, with thetenth green complex being but one of a number of examples.In this case, the fairway actually stops some fifty yards shy of the green and Tillinghast/Burbeck pulled some of the dirt shy of the green complex forward to build up the green pad. One result of such a design is that the player must find the fairway; otherwise, he is likely to have to lay well back from the green on his second shot.

The view from the 10th and 12th tees, a gathering spot in the round.

Eleventhhole, 430 yards; A deceiving hole. From the tee, the golfer has a clear view of the flag straight-ahead. However, from behind the green, the player notices that just about the entire fairway is actually to the left of the direct line from flagstick back to tee. Thus, the true line off the tee is well right of the flagstick. However, aiming away from a flagstick is difficult for any golfer.The false front on the leftof the green is onethe most distinguishing features of theeighteen greens.

The flag is visible in the distance.

This picture was taken ten months prior to the 2002 U.S. Open. The U.S.G.A’s tightening of the fairways led to a total disconnect between the fairway and its bunkers. The only way to get in these bunkers is if the ball flies into them. Otherwise, the tall grass will gobble up the ball. Hopefully, the Green Keeper will restore the fairways to Tillinghast’s desired width, which is out to the bunkers.

Fourteenthhole, 160 yards; Played across a valley, the first view of the hole makes the golfer want to hit it long, especially as the green is protected by a deep front right bunker. However,the green is pitched from back to front and there is a steep fall off at the back that makes an up and down unlikely. 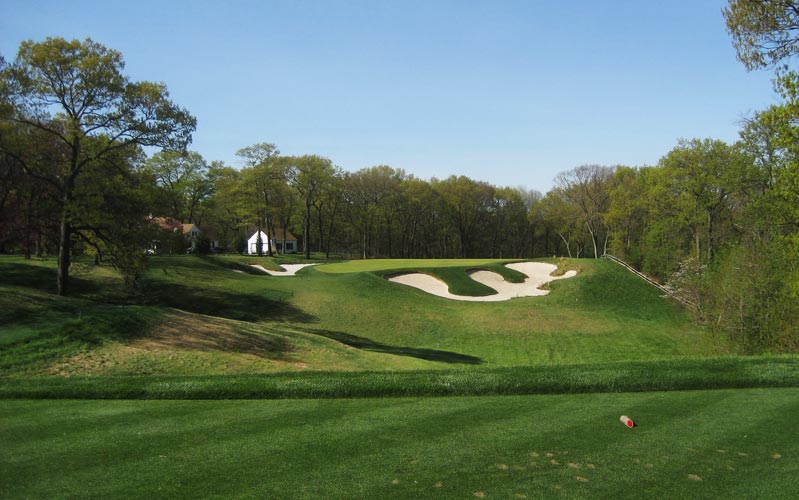 Fifteenthhole, 470 yards; When a golfer encounters a green that was designed by a Golden Age architect atop a hillock, he should be concerned as the green will invariably follow the flowof the land and likely besteeply pitched from back to front. When such a hole also has massive length, the golfer is in real trouble and such is the case with the fifteenth, the hardest hole on the course and one of the hardest two shotters anywhere, though not unnaturally so. 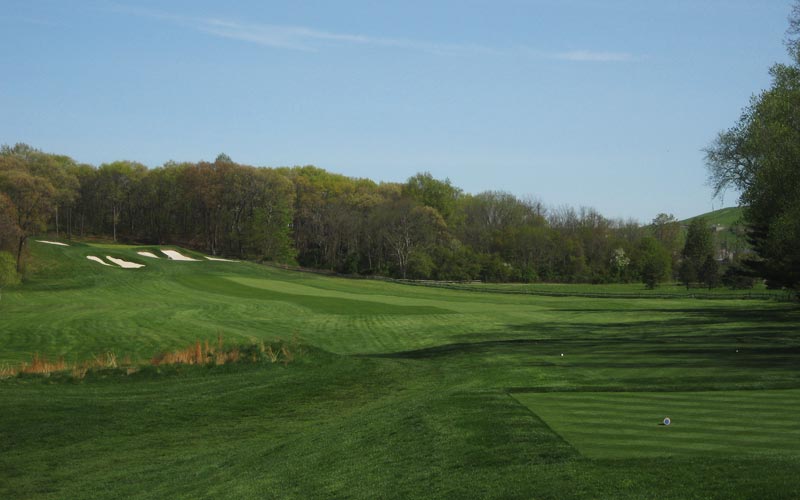 The daunting uphill fifteenth, which has the most pitch of any green on the course.

Seventeenthhole, 200 yards; Jack Nicklaus must regret that the U.S. Open was never played here during his prime as The Black relentlessly asks the golfer to hit highlong irons. The option of a run-up shot is regrettably absent for a course that is both long and exposed to the wind. In this case, the green site was benched into the side ofa hill and a monstrous frontal bunker obscures the front of the shallow, hourglassgreen. Long and left is the best place to try and manage an up and down. 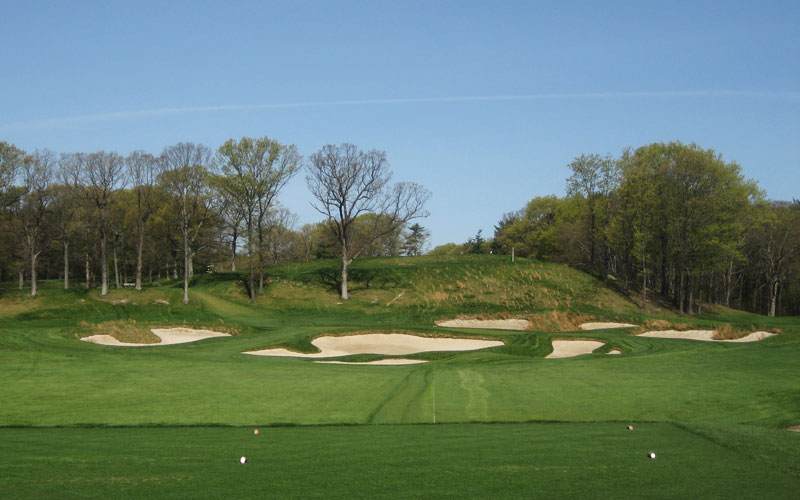 Only a well struck aerial shot will suffice. 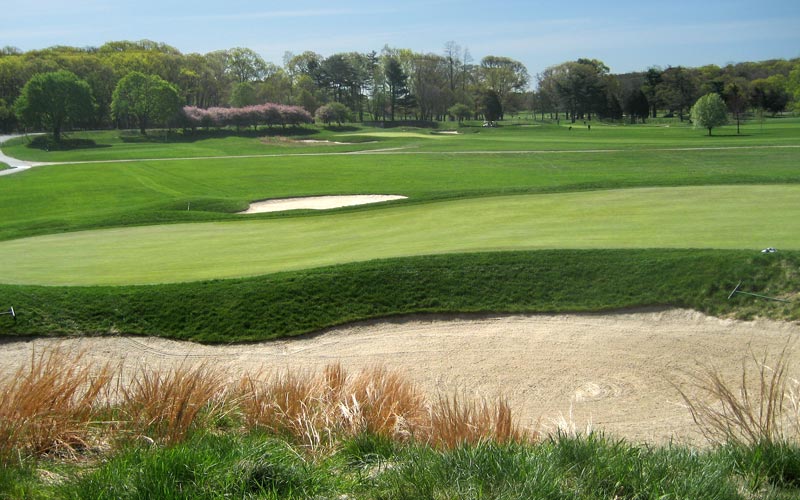 As seen from behind, the seventeenth green is an hourglass shape with the shallower right side providing the most exacting (i.e. sucker) hole locations to get near.

Rees Jones was given the responsibility of restoring the course to its former glory prior to the 2002 U.S. Open. Work commenced in July 1997 and the course re-opened in June 1998. Most people who accept a restoration job of such a classic have little to gain but Rees is to be credited for reviving the size and scale of Tillinghast’s original bunkers. These are the finest shaped bunkers of any of Rees Jones’ efforts with which the authoris familiar. Nonetheless, to say that they closely resemble the old black and white photographs that hang in the clubhouse would be an overstatement.

Tillinghast fell in love with this property from the moment when he first saw it as there are some similarities between Bethpage and his beloved Pine Valley. For example, some compare the eighth on the Black to thefourteenth at PVGC. However, overtime, much of the sandy nature of the terrain at Bethpage has been lost. The chief attribute the two courses share today is the player’s feeling of helplessness when off his game at either course.

And plenty of the U.S. Open contestants can now relate to that sensation. The course certainly identified the world’s finest player and if theset-up had been more imaginative with greateroptions and short game interest (like the tightly mown area behind the fourth green), Tiger Woods would have only won by more shots.

Of course, for oversix decades, public golfers have long appreciated the unique qualities of this course.Some even go so far as to say that it favorably compares with any course on golf rich Long Island but with its absence of several (or at least one) genuine short two shotters and also a general lack of finesse play, the author wouldn’t go that far. Still, this is indeed one of the few designs in the worldthat inspires golfers tocamp outovernight to secure a tee time andtoendure six hour rounds. And, perhaps most impressively,its alluremakes golfers do it time and time again. Is there any greater compliment? 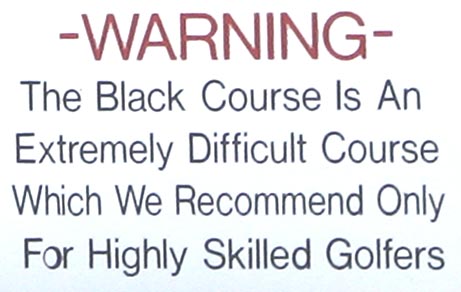 The warning on the first tee says it all.