R.I.P. – The course was closed on November 7th, 2008 and the property was sold and converted into a housing development.

Beechtree’s minimal design becomes extraordinarily attractive and fun to play thanks to the efforts of its Green Keeper.

Firm playing conditions have long played a major role in making golf in the United Kingdomsuch a joy. Watching a white golf ball bumble along the ground for 20 or 30 or even 70 yards is a sight to behold. In addition, such firm conditions also mean that a slight knob or a few degree slope in the land can play amajor role in determining where a golf ball ends up.

This message of simplicity and of using the nuances in the topography was snuffed out in American architecture from WWII until the late 1980s because of the rush to use heavy earth moving equipment. Man-made hazards in the form of rows of mounds and water hazards became the norm but ultimately such hazards became repetitive and coursestook on a certain sameness, both visually and how they played. Courses tried to distinguish themselves by becoming harder and harder, to the pointof ridiculousnessby the mid to late 1980s.

Tom Doak attempted to help lead the charge back to the ground game and firm playing conditions when he designed the highly original High Pointe in 1988. However, its design never had the intended effect on architecture nor did it bring Doak the credit that it should have. The reason? There was a complete disconnect between how the architect intended the course to play and how the course was presented for play. Firm playing conditions were a must the holes to play properly and yet, within ten years of its opening, on the front side alone, holes 3, 4, 6, 7, and 8 had become shadows of how good they could have been because of soft playing conditions. The bunker behind the 7th greenbecame a wasted feature and gone was the joy of trying to chase an approach up the ridge in the 8th green.

The common – but unfortunate – desire to see green has also led to the overwatering at Lost Dunes, Doak’sothernoted design in Michigan. To see so many potentially arresting shots be lost to soft playing conditions is a shame but fortunately, events tooka change for the better when Doak and Renaissance Golf Design were commissionedto design both Quail Crossing in Evansville, Indiana and Beechtree Golf Club north of Baltimore in Aberdeen, Maryland.

In the ownerJames Knott and Green Keeper Russ Davis at Beechtree,Renaissance Golf Design finally foundpeople who understood their design philosophy and howeach hole was meant to play. Doak’s long held beliefs in minimal architecture and getting the most from the subtle nuances of the land would be allowed to shine through finally.

Take the 3rd hole as an example. Modest in length at 345 yards, the hole fits the ground perfectly. Unlike Tom Fazio and Jack Nicklaus are prone to do, the tee area itself is raised only a few feet with the result being that the golfer will not see his ball land. He may well see it bounce but he won’t see it land. The fairway slopes from left to right and in the right rough there is a drop that encourages the ball to findtwo fairway bunkers that are perfectly melded into their surrounds. 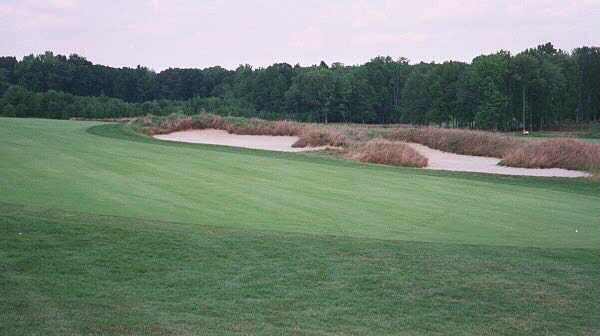 The bunkers along the right of the 3rd fairway seem part of the landscape. The same cannot be said for the oval bunkers with their glaring white sand found on many American inland courses.

At first glance, the approach to the 3rd greenseems easy. The golfershould have a short iron in his hand and the large green is ‘only’ defended on one side. 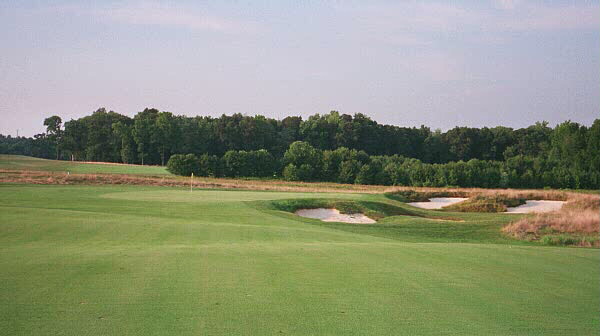 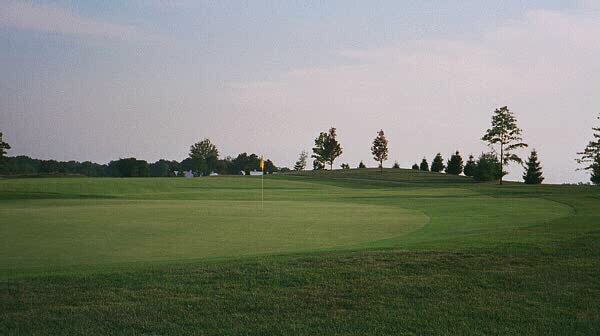 Just as the low profile 3rd hole goes, so do many of the other holes. The golferis never bombarded or overwhelmed with flashy, artificial features but rather gains a broad sense of how the holes should be played by studying the immediate surrounding land and its natural features.

For instance, just as the left to right slope of the land dictates the play of the 3rd hole, this same slope was used equally well on the the 5th hole (which runs in the opposite direction to the 3rd and thus the slope ofits fairway is from right to left) and the nearby 10thhole (which plays downhill/sidehill off this slope).The team at Renaissance Golf Design deserves fullmarks forfindingthe ideal routing that uses the same slope insuch different manners.

Fifth hole, 425 yards; A perfect dogleg in that it can accomodate the full range of players that a public course attracts. Themore modest golfer can play straight ahead and turn the hole into a three shotter, though with the green open in front, he never feels out of it. The further left the tiger golfer seeks to go, the more challenging the tee ball becomes. A bunker on the inside of the dogleg requires a 250 yard carry from the back markers and it receives plenty of play. The approach shot typifies the fun of golf at Beechtreeas the golfer may well elect toinvent a low running approach from 150 yards, let it take the right to left fairway slope, and chase onto the green, which is angled to receive a shot from its high side. Such an approach is what makes Huntingdon Valley in nearby Philadelphia such a remarkable course to play. 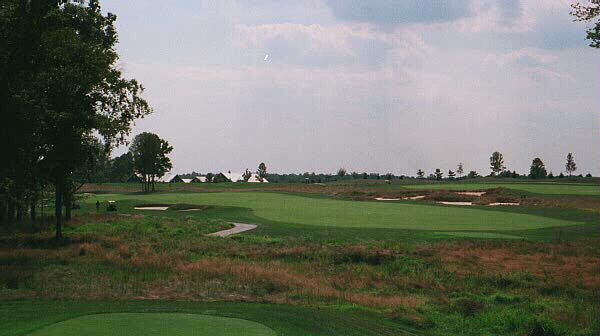 The graceful dogleg 5th is a favorite of many… 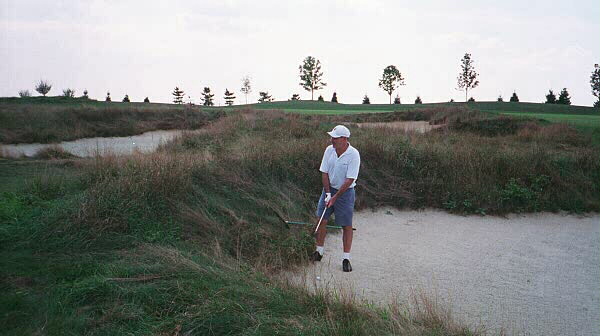 unless, like Geoffrey Childs, your tee ball finds the bunkers on the outside of the dogleg!

Eighth hole, 590 yards; When faced with an elevated landing area from a tee, many modern architects build up the tee pad under the false assumption that no one likes to hit an uphill shot to a blind landing area. Many great holes possess such atee ball (the 4th at Pine Valley, the 2nd at Royal County Down, the 4th at Royal Melbourne West, etc.) and yet modern architects continuallyrob us of the opportunity to play such holes. Similar to the 12th tee at Beechtree, Doak didn’t build up the tee pad and the hole is better for it. The golfer must pick a spot on the far clubhouse as his aiming point and away he goes on this long journey with the slope of the land trying to kick the ball to the right and the golfer battling to place hissecond shot in the left half of the fairway for the best approach into the green. 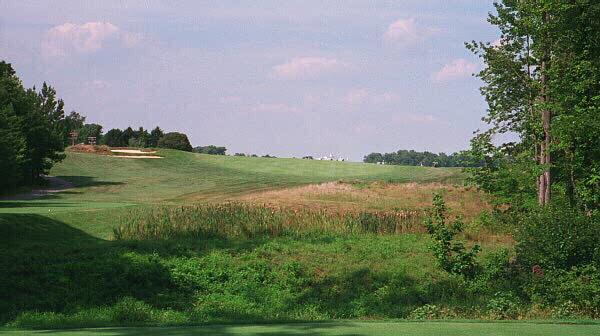 The uphill tee ball on the 8th with the clubhouse roof in the distance. Note the strong left to right slope of the land. 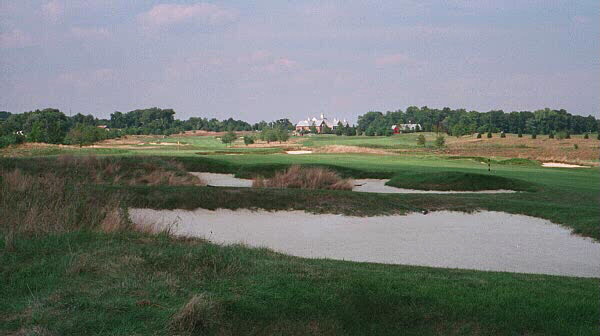 A drawn second shot will ideally carry these bunkers and hold the ball on the left hand side of the fairway, thus giving the golfer the perfect angle into the green, which is bunkered front right.

Tenth hole, 425 yards; A favorite ploy of Donald Ross was to offset the fairwayfrom the tee and Doak does the same here, creating loads of interesting diagonal playing angles. Still, the approach to the most severe green on the course may be even more fun. 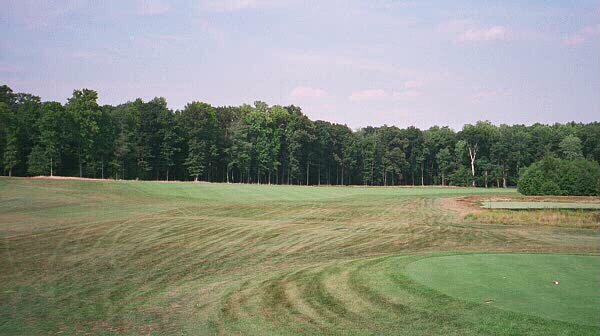 The general left to right sweep of the land is put to excellent use off the 10th tee. 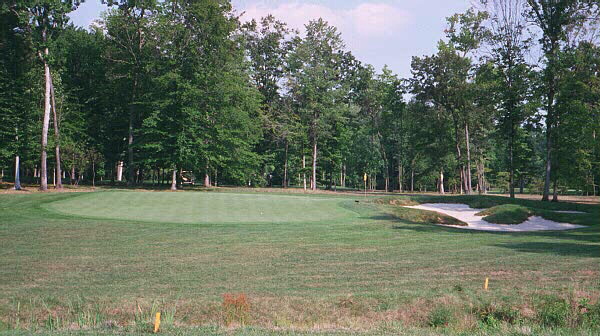 Named the Boomerang, an approach that lands 20 feet left of the day’s hole location will take the slope and funnel toward the hole. There is no reason ever to flirt with the right greenside bunker.

Eleventh hole, 345 yards; Similar in shape to the 12th at Pine Valley, the long green is best approached from the end of the fairway, which means the golfer must skirt past the lone bunker on the right of the fairway. Theman wholays back off the tee and plays more conservatively will find that his approach is at an angle that makes the green play much shallower. Creating such interesting angles of play, especially on flat land, is a lost art form.

The bunker that edges into the fairway on the right is confounding to the golfer who seeks the best angle into the 11th green on the left.

Fourteenth hole, 440 yards; Even though this is visually the most dramatic hole on the course, every class golfer can still enjoy it. Far too often in modern architecture, the more dramatic holes are often the least playable as the architect places troubledown both sides of the hole and on each side of the green, thus terrorizing the weaker player. 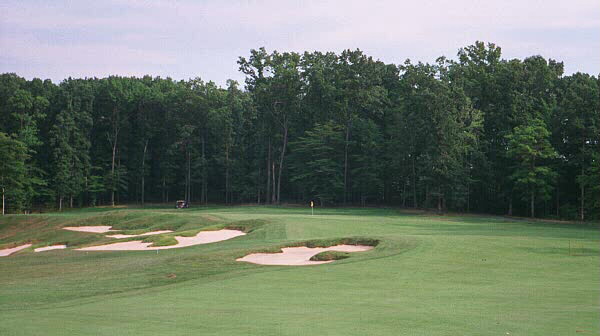 Named the Sahara, the golfer who doesn’t wish to carry these sprawling bunkers on his approach shot must flirt with the bunker on the right of the fairway. 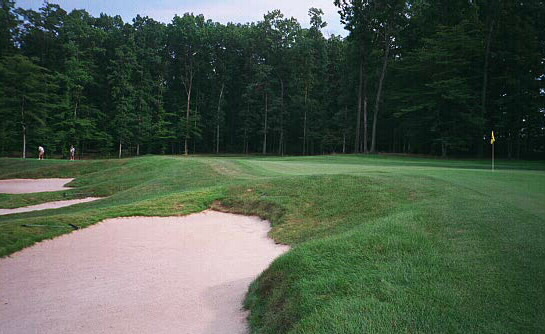 Most green to tee walks are short at Beechtree, as seen here between the 14th green and the golfers on the 15th tee to the left.

Fifteenth hole, 475 yards; As Gene Sarazen once remarked, the toughest golf should fall in the middle of the back nine and this is indeed the case at Beechtree. Though 16-18 are all clever holes, the thinking player should be able tohold his round together once he gets past the 15th hole. The attribute ofa local golfer leavinga public course on an upbeat note is a valuable one.

Seventeenth hole, 355 yards; The 17th and 18th holes at Beechtree cover over 900 yards of land. If this course had been built in the 1960s, does anyone doubt that the last two holes would have been 450 yard brutes? Instead, Doak let the holes fall where the landdictated and the result is this clever little two shotter. This gull wing green is similar to the 15th at Riviera and is the second deepest on the course at 42 yards. The only other deeper green? The 3rd at 46 yards, which is the other drive and pitch hole! Getting a wedge shot close to a hole on a large green is much more difficult than it sounds. 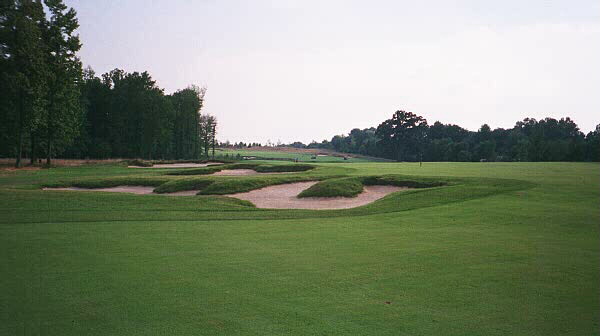 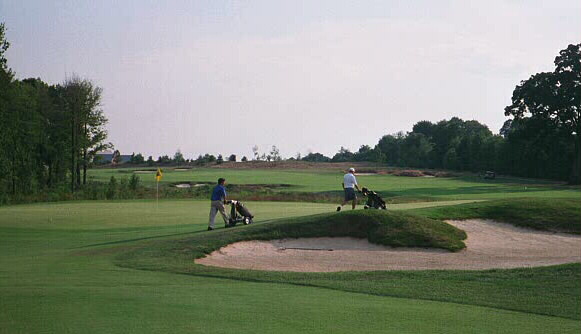 …the best angle into the gull wing 17th green, which falls away in the back as well as in the front. The 555 Home hole stretches in the distance.

Given that Beechtree is a public facility, it needs to accomodate a wide range of skill levels. Based on the generous width of its fairways, it can do just that. Just as important, given the uniformly firm playing conditions that Davis presents, the better playeris continually challenged to play a variety of shots into many of these greens and so the course also holds the better player’s attention as well. Doak and Bruce Hepner, who spent the most time on site for Renaissance, are to be congratulated for achieving this hard-to-find balance.

Within the context of Doak’s other work, the greens at Beechtree are more subdued, as is the design in general, which is reflectiveofthe property’s gently rolling nature. However,thanks to a) its uniformly firm playing conditions courtesy of an owner and Green Keeper who understand the architect’s intent and b) a design that provides the golfer with numerous opportunities to use the ground, the golfer continually is both allowed and encouraged to create golf shots. Through this enjoyment of inventing shots, Beechtree becomes one of the most delightful courses to play that Renaissance has designed to date.