Your home course, what should it be? If, in a perfect world, you could pick your course would you choose a ‘famous’, ‘highly ranked’, or ‘championship’ layout. One would hope that, if the situation were presented, that would be the choice.

But, imagine you are a father that lives in central Nebraska who would like to teach your two sons the game you love. Wouldn’t the perfect place be a spot where you could throw the bag on your back after dinner in the summer and walk nine while the sun sets? Better yet, would the course challenge them as they grew to love the game? And, more importantly, would this club support junior golf?

All of those questions can be answered yes at York, a small city of about 8,000 people just an hour down the road from Lincoln, where my dad taught my brother and me the game.

At York, you won’t see any Top 100 ranking plaques, 4-star awards or the like. In fact, a quick glance at the scorecard and you may just let out a little laugh. From the back tees, it measures just 5,980 yards and plays to a par of 70. Many who have played it, though, will tell you it presents many more challenges than other ‘championship’ courses they may play in Lincoln or Omaha.

Is it perfect? No. In fact, the place is grossly overpopulated with trees but the club is currently working on a remedy to that problem (thanks in part to this forum) and already 30 trees have been removed from one hole!!

The club was founded in 1919 by Irish businessman Billy O’Donnell and other town leaders. They purchased just 60 acres on the west end of York for their shooting range and golf course. The 250 new members were charged $100 each to start up the club. With times difficult, the shooting range was abandoned in the 1940s.

In 1933, York drew the talents of Open Champion John Goodman for an exhibition with local female champion Ruth Moore.

The club hired Charles Johnston â€œ the pro at Omaha’s Happy Hollow Club â€œ to route the original nine holes, which remained mostly unchanged until the greens and 9-hole routing was revamped in 1963. That year, with the help of ‘the greenskeeper at Omaha Country Club’ â€œ according to club history â€œ the locals set out to make the course one of the most challenging in South Central Nebraska. In doing so the club, ‘removed excess trees’ (!) while making the changes.

York CC remained a nine-hole tract until the club purchased a parcel of land to the west of the existing course in 1986. Designer Jim Engh and the Landscapes Unlimited team were called on to route the second nine in 1987 and the back nine opened for play in 1988. Though, not certain, the author believes YCC’s back nine to be one of Engh’s first solo efforts.

The diversity in the course is clear â€œ the older front nine has mature trees and eight holes run north and south. The back nine runs in the opposite fashion with all but two shots on the home nine playing east and west.

The author can think of only two ‘claims’ the course has on fame. And, the first is that Indiana Pacer star Fred Hoiberg makes an annual trip for the member-guest. The last would take a little more explaining.

While hosting their first Nebraska Junior in 1989, a golfer started the back nine with an unbelievable stretch that landed him in Sports Illustrated faces in the crowd. The golfer, Derek Nannen, is now an instructor with ESPN Golf Schools in Scottsdale, AZ. In the first round, his card for the start of the back nine read as follows:

One of the reasons for the short length of the course is the ability the architects have given the golfer to score many birdies on the course. In fact, during your trip around the course you play four par-5s and six par-3s. A wonderful trait, in that the tiger golfer looks to birdie almost every par-5, but rarely accomplishes the feat while the average golfer has a chance at four very easy pars, and can make birdie if he plays his cards right. And, shouldn’t a beginning golfer be given the chance to play a one-shot hole, where instant gratification comes with just one good shot to the green. At York, the golfer gets three opportunities on each nine.

The longest par-4 reaches to just 409 yards, with the shortest playing 272. The first par-5 is 458 yards, the last 560. The six par-3s play from 153 to 212 yards. What variety! After seeing the card, one would think a course record of 59 or 60 may be in the works. Yet, a course record of 63 is all that can be attested on three different occasions â€œ all during the annual York Amatuer. Two of those rounds were the first day of our two day event. Both golfers won the tournament, but scored 75 and 73 during their Sunday rounds.

Hole #1, Par 4, 405 yards: A demanding opener, which was improved with the building of a new clubhouse as about 20 yards of length was added to the back tee. A downhill tee shot, then the first of 11 encounters with Beaver Creek on the approach to a tiny green.

Hole #2, Par 3, 212 yards: A slightly downhill hole that can be approached with a run up shot. The green slopes slightly from back to front making short of the pin a very nice place.

Hole #3, Par 5, 458 yards: Gentle on the scorecard, but the uphill hole plays to a somewhat small green that is difficult to hit – even if the golfer comes in with as a little as a 7-iron. The green is well protected with bunkers front left, right and behind.

Hole #4, Par 3, 210 yards: Another monster, with out of bounds right and a green that slopes back-to-front and right-to-left. Most players are happy to be even or 1-over par standing on the fifth tee. This hole was the original first hole and played as a short par-4 to the top of the hill where the fifth tee is now located. 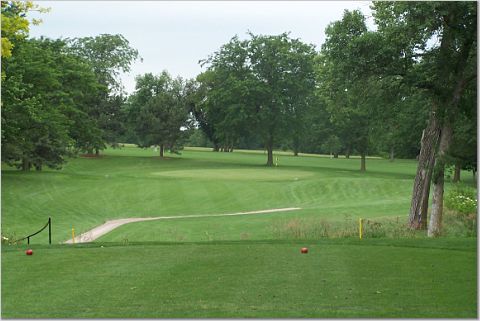 The 2nd from the tee.

Hole #5, Par 4, 311 yards: The golfer desperately wants to put the ball on the fifth green, but finds that easier said than done. The green is not deep or receptive to even the shortest approach. Beaver Creek is just over the green and six is sometimes easier to make than three.

Hole #6, Par 3, 171 yards: This hole plays a touch shorter than the yardage, but three bunkers do a good job of protecting yet another very small green. 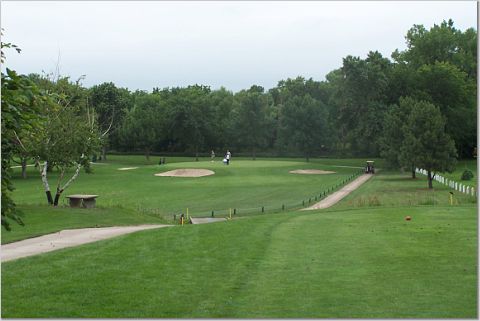 The 6th from the tee.

Hole #7, Par 4, 407 yards: Without a doubt the most demanding hole on the golf course. An uphill tee shot, then an approach to a green where only the flag is visible. The left of the green falls off sharply. Top it off by playing it in the normal 15-20 mph wind in the summer and you have many fives on the card. 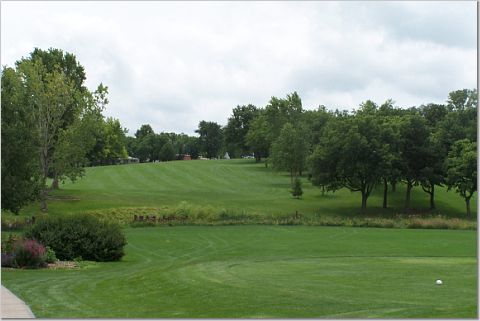 The 7th from the tee.

Hole #8, Par 4, 409 yards: Back down the hill you just ascended and down wind. Normally a 3-wood or iron off the tee and still just a short iron to the green. 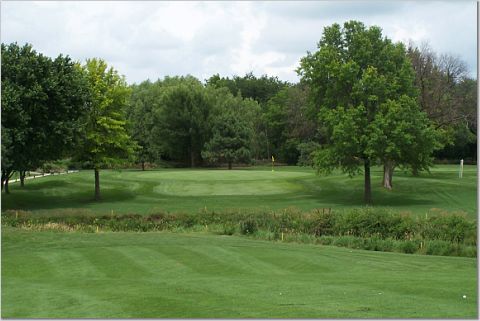 The approach to the 8th.

Hole #9, Par 5, 486 yards: Its again back up the hill to the club house for a good three-shot hole. The golfer should ideally hit his second shot to about 100 yards short of the hole, the widest landing area. The bolder the player chooses to get, the more he is rewarded with a simple pitch to the green.

Hole #10, Par 4, 379 yards: The tee shot plays into the prevailing wind, then the hole turns to the right. The approach should be hit to the left half of the green and the greens slopes gently from left to right.

Hole #11, Par 3, 153 yards: A short par-3 that is very exposed to a south wind. It is nothing but out-of-bounds and corn to the left, and the golfer must be able to control his ball against the wind with a draw or be daring enough to send the ball out far enough left to hold the green, which slopes from left to right. A new tee was recently built which will add about 30 yards to the hole, giving YCC that 180 hole it desparately needs. 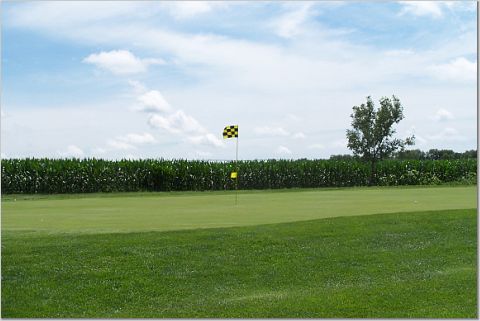 Hole #12, Par 5, 512 yards: The first of consecutive par-5 holes. Beaver Creek runs down the right, crosses the fairway at 370 yards, and then runs down the left. The green is nestled in the corner of the property that is about to be ruined by the US Highway 81 four-lane expansion. 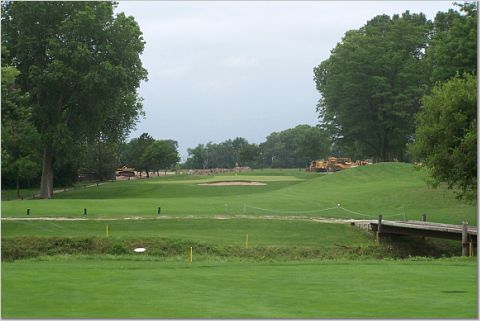 The approach to the 12th.

Hole #13, Par 5, 560 yards: Beaver Creek is again on your right and in play from the tee, but the hole moves away from the water as you get closer to the green. Big hitters, with a well placed drive can get the ball on the green in two shots.

Hole #14, Par 3, 167 yards: Though shorter than the sixth hole on the front nine, this hole usually plays one to two clubs longer because it is more uphill than it appears.

Hole #15, Par 4, 342 yards: In the original plans, this hole was to be the last. An underrated hole, in that the hole can and should be attacked from each side of the fairway, depending on hole location to make a birdie.

Hole #16, Par 3, 165 yards: Down hill and as many as three different clubs depending on the hole location. The hill on the right has been mowed down recently so that balls can bounce on the green from the right. A lake on the left catches more balls than one would think and the tall tree guards the back left pin quite well. 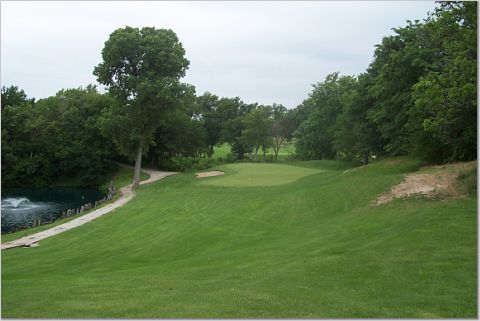 The 16th, as seen from the right of tee.

Hole #17, Par 4, 272 yards: It’s a shame, this classic risk-reward hole is not sooner in the nine â€œ it rarely gets played in a match. The hole was originally to be the 14th and the author feels it may be a better fit there in match play. However, a hole like this late in a medal play round certainly tests the nerves. The hole can be played by laying up short of the first hazard, to the ‘island’ as the locals know it, or by blasting to the green with a driver (or even 3-wood with today’s technology).

Hole #18, Par 4, 363 yards: Should the closer be well over 400 yards and a demanding par 4 on each course? Hardly. The 18th at YCC certainly isn’t. Yet, it’s not a let down. The skyline green is demanding to hit and should actually best be approached on the ground when the course plays firm. The green slopes from front right to back left and rarely holds anything but the deftest approach. 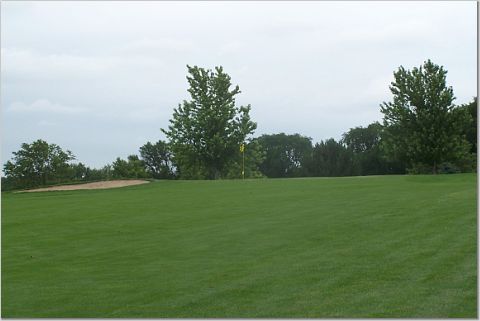 The approach to the 18th.

The golfer rarely has to deal with much length at York, but is always challenged whether it is a long par-3 early in the round, long into the wind holes on the front nine or thinking par-5’s and a devilish par-4 on the back side.

As previously stated, the club could stand to have some trees removed but it’s still refreshing to see the membership has not ‘caved in’ to modern golf. Some well respected clubs in Nebraska have altered green complexes in the last 10-15 years to make them have mounding and more tiers and the like. At York, you still see the same greens you saw 40 years ago on the front nine.

As should be the trait with any golf course you call home, YCC offers challenge and fun to all level of golfers and is able to stand on its own, even in this day and age of long balls and hot drivers.