Thomas, David – Sphinx in Your Back Garden by David Thomas

Thomas, David – Sphinx in Your Back Garden by David Thomas

There cannot be many golf clubs that possess an original Dr Alister MacKenzie designed green, one that retains its original contours and features, yet hasn’t been actively played on for 80 years.

One such green does exist however, and it’s located at The Worcestershire Golf Club in Malvern, UK.

In May 1927 there opened in Malvern a new 18-hole golf course designed by Dr Alister MacKenzie for The Worcestershire Golf Club.

The Worcestershire GC was founded in 1879, making it the joint 15th oldest golf club in England. From founding until 1927 the Club played over a variety of different course routings on Malvern Common. By the mid-1920’s however, the Common with its open access to the public, its animal grazing and ever more traffic on the roads crossing the lines of play, had become a less than satisfactory place to play golf. 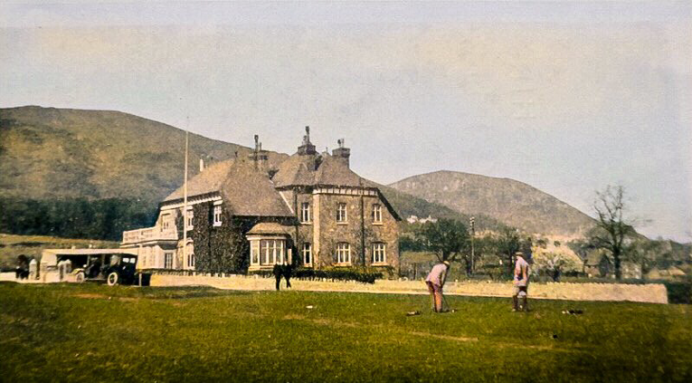 Above: the Clubhouse on Malvern Common of The Worcestershire GC as seen in circa 1910. The building is now a private house (the photo is from the Club archives and this and all such photographs below have been colour enhanced).

The Club therefore looked for another location and found one available at nearby Wood Farm (although it should be noted that some ladies and artisans continued to play golf on the Common until WWII). 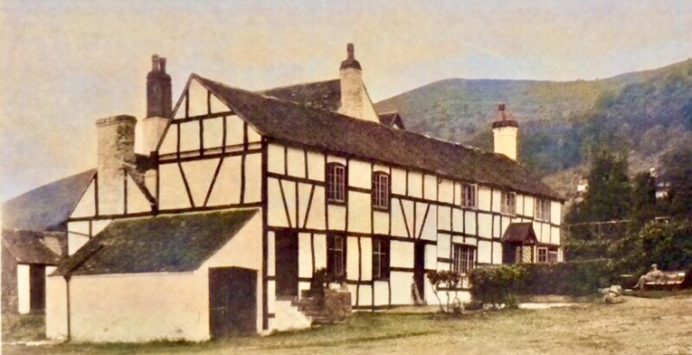 Above: the farmhouse at Wood Farm that served as the Clubhouse at The Worcestershire GC from 1927 until replaced by a new build in 2000. The photo above is from Robert Browning’s 1927 booklet.

The Club engaged Dr Alister MacKenzie to design the new course and by May 1927 the course, constructed by the British Golf Course Construction Company and overseen by Alister’s brother and partner in the BGCCC, Major Charles MacKenzie, was ready for play.

MacKenzie’s course was an open aspect parkland design of 6,200 yards and comprised two loops of nine returning to the former farmhouse that served as the Clubhouse.

During WWII however, a huge change to the Club and course occurred when the second nine of MacKenzie’s course was compulsory purchased in order to build a hospital, one of many constructed in the area, in this case the US Army 55th General Hospital, for anticipated D-Day and thereafter casualties.

Above: the WWII US Army 55th General Hospital. 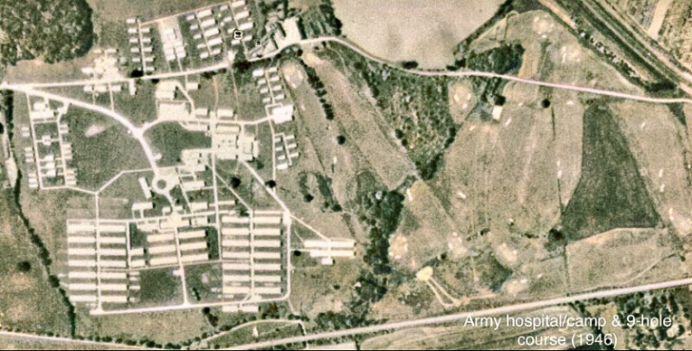 Above: a 1946 aerial photo showing the size of the hospital/camp and the then only 9-hole course (MacKenzie’s original front-9). This aerial is from Google Earth.

From WWII WGC thus found itself with only a 9-hole golf course and the Club played as such until the mid-1970’s when some of the hospital land was returned to the Club and nine further holes were built by Hawtree and Co. Although some of the new Hawtree holes were built on sections of the former hospital land most were not as various buildings and roadways now covered much of that area.

One MacKenzie second-nine green located in a far corner of the property however, did manage to escape destruction during the building and operation of the hospital, MacKenzie’s original 16th green.

This green, originally on the end of a circa 420 yard ‘bogey 5’ that played uphill and into the prevailing wind, still exists, unused and unchanged for 90 years, original contours intact, although it should be noted that for a very short period in the 1970’s it was used as a practice chipping green. 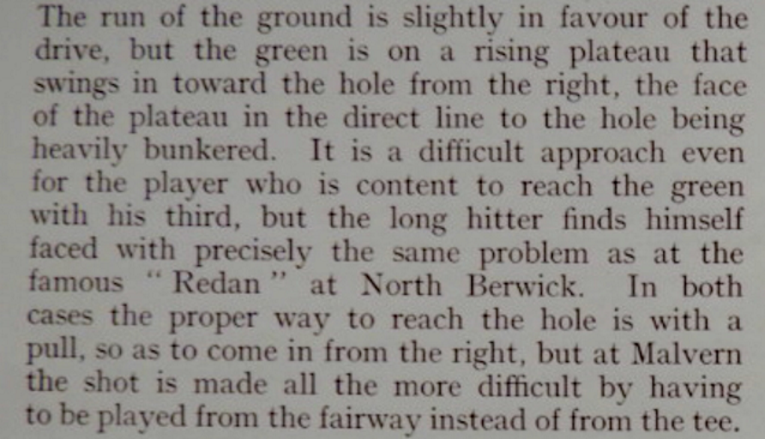 It would seem, and local anecdotes confirm it, that the 16th was once a very formidable hole, especially when played wearing a jacket and tie with an early generation wound ball and hickory shafted, wooden headed clubs.

In 2015 a comprehensive review of the Clubs history concentrating particularly on the history of the course was undertaken by the author of this piece.

This review unearthed many old course details, tidbits of information and photographs that had not been seen before or at least not seen for a considerable period of time.

One of these discoveries was Browning’s 1927 booklet and the photograph it contained of MacKenzie’s original 16th green, since WWII hidden and unloved in a corner of a field still owned by the Club yet only used by a local farmer for grazing sheep. 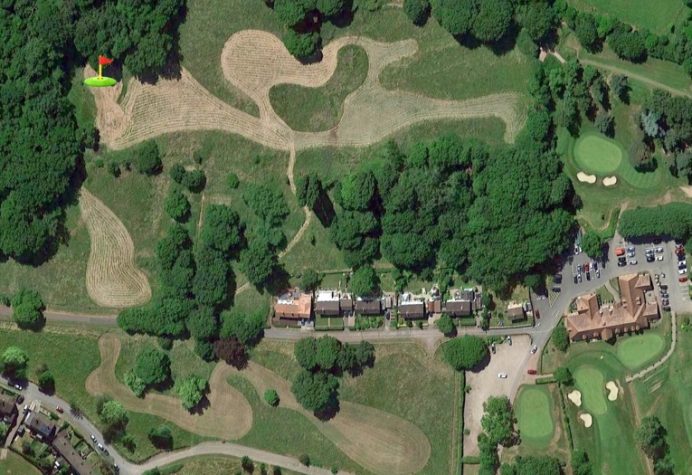 Above: top-left, the location of the old 16th green as seen on present day Googlearth.

With the approval of the Clubs Board of Directors and the Chairman of Greens the farmer removed his sheep and the Clubs Course Manager gradually started to remove vegetation from around the old green, a task made harder given the amount of vegetation that had grown up over the decades and the wetness in the area caused by a severely blocked field drain and a spring seeping out of the immediately adjacent Malvern Hills.

Various views of the green are shown below commencing with the only known original photograph, the one published in Browning’s 1927 course booklet. 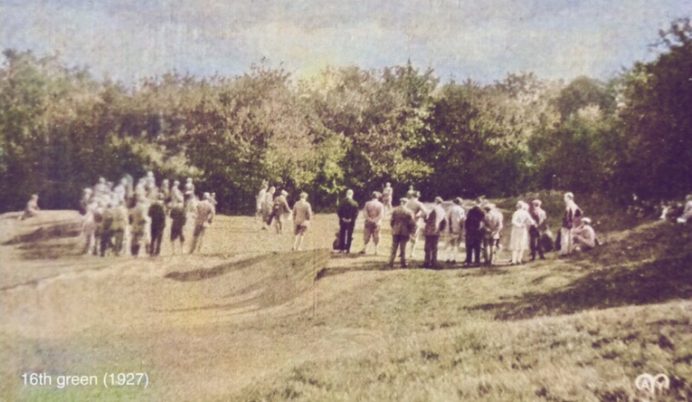 Above: Alister MacKenzie’s original 16th green at The Worcestershire GC as seen in 1927 (Original photo as published in Browning’s 1927 booklet). This 420 yard hole played in from the left side of the photo. 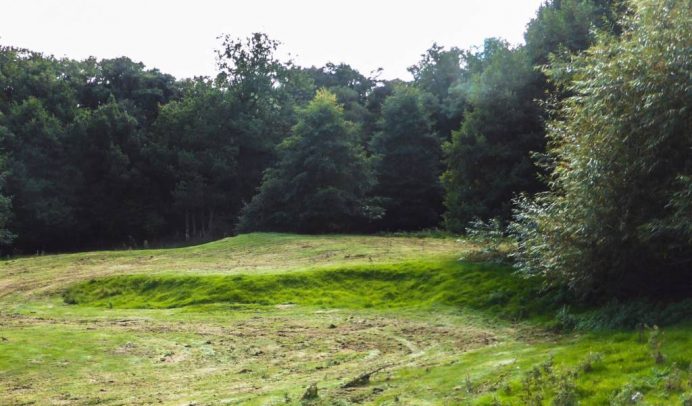 Above: the once 16th when grass and vegetation clearance initially commenced. Note that this photo and the photo displayed above are, due to vegetation growth, not taken from identical positions. 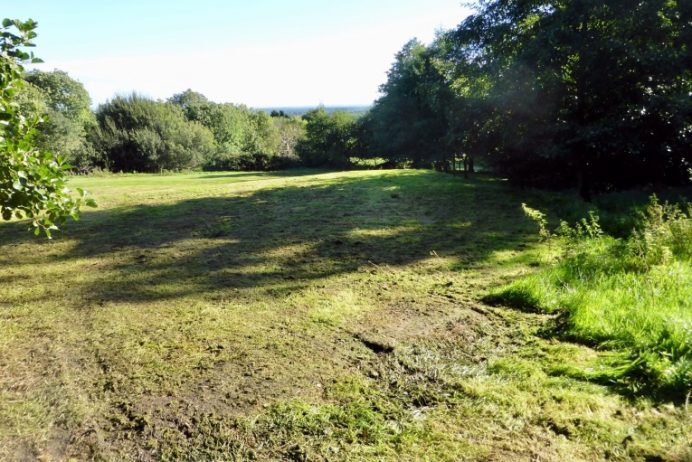 Above: from the rear plateau of the extremely wet green. 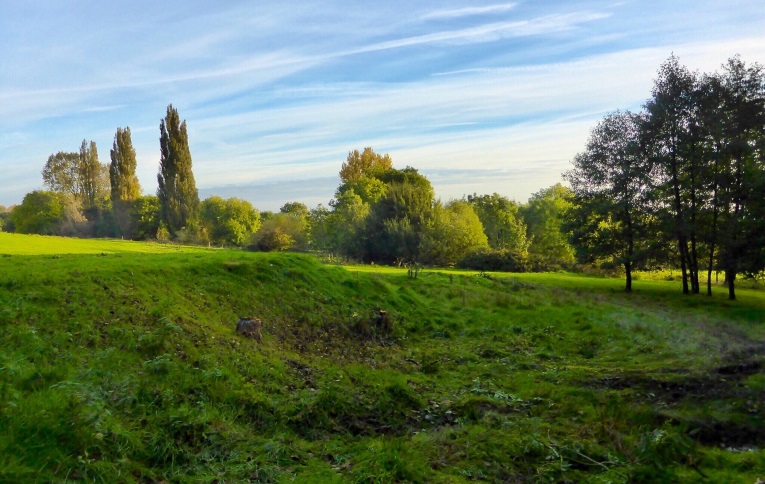 Above: the deep hollow that sits to the south side of the green, ie to the left side as the hole would once have been played. 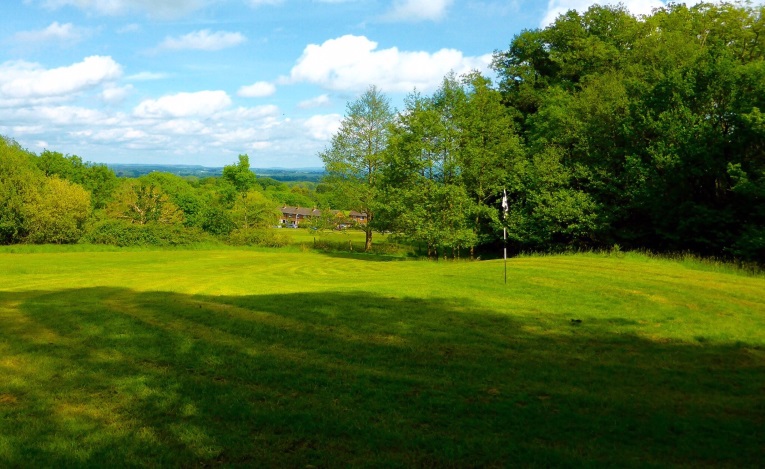 Above: from the rear of the green. There is an additional area of green behind that visible in the photo but it is covered in more significant vegetation and is surrounded by an old field drainage ditch that has become blocked. With some vegetation clearance the views from the green across the valley of the River Severn towards the Cotswold Hills would be spectacular. 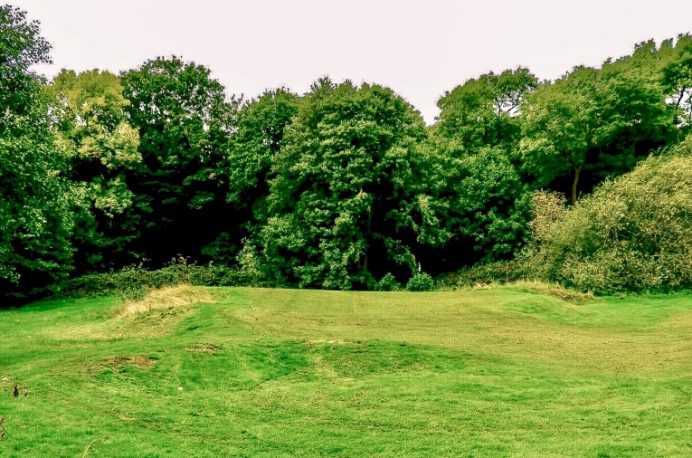 Above: the entrance and severe contouring of the green as seen from 30 yards short and slightly to the left. The depression at lower-centre in this photo and the larger hollow to the right side of the green would have been sand bunkers. Local anecdotes suggest the severe hollow left of the green may not have been a bunker.

During the last few years several prominent golf course architects, writers, historians and golf course architecture enthusiasts have visited the Club and viewed the green in question, which is where the “Like having a golfing version of the Sphinx in your back garden” title to this piece originated. Each was very generous and encouraging with their comments and others who wish to visit and see what’s on the ground are very welcome.

Presently, that is as this piece is written in late 2019, the green is still in an unrestored state with no work having been done on it for 18 months or so.

It is very important that readers appreciate that The Worcestershire GC is a private members club, owned and financed by the membership and as such finances and projects at the Club have different priorities at different times and currently restoring this old green, irrespective of how unique it may be in golf course design history, is not necessarily seen as a priority. Perhaps one day it may be although it’s remote location several hundred yards away from the other holes on the existing course mean it cannot easily be combined with the existing course routing. One possible option would be for it to become part of a separate short-hole course, although this would require membership approval.

In the interim period this piece has been written to appraise interested parties of the situation and to record for the benefit of future generations of historians and enthusiasts what is on the ground at The Worcestershire GC in Malvern and its golfing significance.

An historical aside about The Worcestershire Golf Club, its courses and architects

The Worcestershire’s new Wood Farm course that opened in 1927 was, as mentioned above, designed by Dr Alister MacKenzie, but maybe, just maybe, it nearly wasn’t.

When he was a very young lad, the later famed golf course architect Harry Colt came to live in Malvern when his recently widowed mother brought her family to live with relatives, and it was on the course on Malvern Common, only a short walk from his relatives house, that the young Harry learnt to play the game, subsequently joining the Club and remaining a member until 1926.

Although a long term WGC member and in due course a man with a huge reputation in golf course architecture, Colt was never permitted to make alterations to the course on the Common. In 1925 however, he was invited to look over the proposed new site at Wood Farm and give his proposals.

For reasons of cost the contract for the new course was eventually given to Alister MacKenzie, who had not originally been involved in reviewing the proposed new site. However, at around this time a prominent Leeds businessman, Bernal Bagshawe, who was a founding member of Alwoodley, retired to live in Malvern, joined The Worcestershire GC and suddenly MacKenzie came into the picture.

This would appear to have caused Colt considerable consternation, presumably not only due to his long standing association with Malvern, his boyhood home town, and The Worcestershire GC, but also because of his once architectural partnership with MacKenzie. 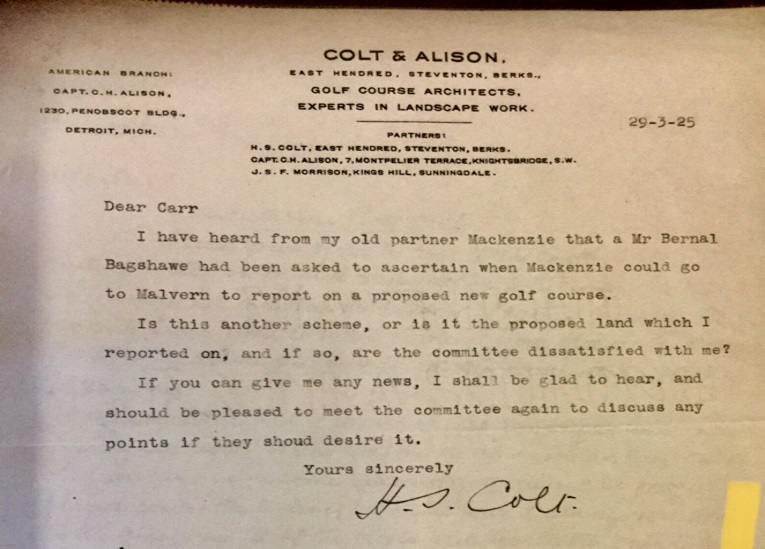 Ultimately Colt, in 1926, resigned his long standing membership of The Worcestershire GC and MacKenzie built the new course. What might have been …..

As to the current 18-hole course, the lay out the Club has played since the mid-1970’s, its remaining MacKenzie greens are on the smallish size, have considerable contour and, with modern green speeds, offer considerable challenge too.

Acknowledgements: The author would like to thank Neil Crafter and Adam Lawrence for their help with the research for this piece. All historical photographs were colour enhanced by the author and the current day photographs are his work as well.