Sharing space with two of the country’s most renowned golf courses is not an easy thing to do. However, for many, Spyglass Hill pulls it off, and does so tenaciously. Ask the average visitor to the peninsula which one of the company’s courses they’d prefer, and most will say ‘ Spy’, ‘The Glass’, or even just ‘The Hill’.

Since familiarity does not breed contempt here, getting multiple rounds around her, certainly creates unforgettable memories. From her vivaciously curved faces (real greens with real slopes) to her almost magical and mysterious ‘Extra Gravity’, Spyglass Hill is a modern riddle, best solved by being aware, sitting back, and try to relax, while allowing what’s going to happen, just happen.

Built in the Del Monte Forest, circa 1966, the almost $700,000 project was a unique collaboration between the Pebble Beach Company and the Northern California Golf Association , Spy is today, both public and private until the year 2016. At that time the course’s ownership will completely transfer to the PB Co.

Spyglass Hill offers almost every golfer the challenge and style of the golf they’d likely prefer, be it the parkland holes, or the dunesland five. However, one thing is constant. All the holes require the awareness, respect and creativity that makes golf such a versatile sport. 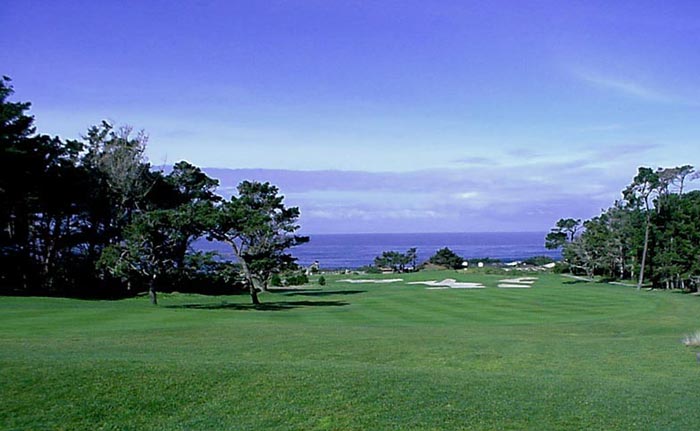 With an opening hole that has few rivals for greatness, this boomerang downhill Par 5 tumbles the golfer out of the forest down towards the sea. Possibly one of the few three shotters that will likely never yield to the technological advances of the I&B. Even with the amply sized green, the cant is mostly away from the golfer, and the green’s sections appear small. Prudent players play a second shot as far right as they dare, to improve the angle in, no matter how oblique. Guarded in front with several bunkers, this tricky green is living proof of golf’s biggest oxymoron, ‘Safely On’. Par here is truly a GREAT start. 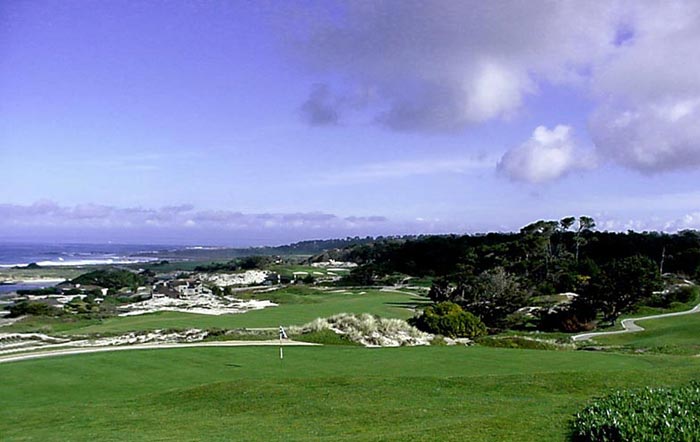 As one crosses the road and climbs the hill to the second tee, a transformation of space, and attitude, takes place. Dunesland is everywhere, and in foggy conditions, there are few better spots for feeling like you are in a golfer’s kingdom. This second hole is a short par 4 named Billy Bones,. It is uphill to a narrow green that also cants away from the fairway. This versatile hole features two distinct teeing grounds, with slightly different angles. From either, the prudent golfer attempts to place their drive in a spot that isn’t too greedy, or too sloped. With a landing area constantly narrowing, and a simple but effective large knob, 200 yards off the tee on the right, that provides altered stances and creative shot demands, for any drive that goes too far. The entire left side of the fairway is a mystery upon itself. Hanging lies that pull farther than anyones imagination, are likely the first exposure to the extremely high level of awareness required of the golfer at Spyglass Hill. 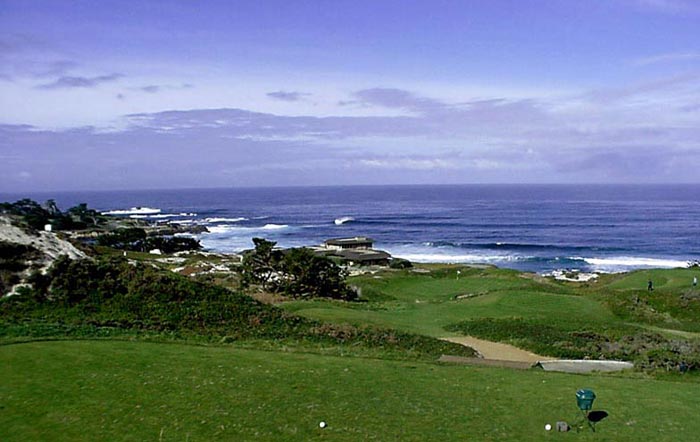 Straight into the wide blue open yonder of the Pacific Ocean, the short downhill Par 3 third, comes with a blind bunker right of the green, while the remainder is surrounded by dunesland. Accuracy with your irons is put to the test yet once again early in the round. 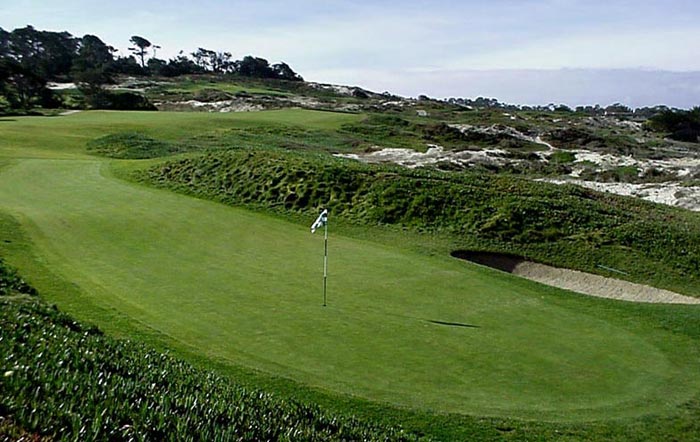 The famous fourth, turns northeast back through the dunes. A short two-shot hole that doesn’t require long and down the middle to utilize the multitude of options on approach. A serpentine shape, well protected fallaway green evokes emotion whatever the golfer’s outcome. The options are plentiful on this hole and counter intuition is at play. Possibly one of Jones’ best. 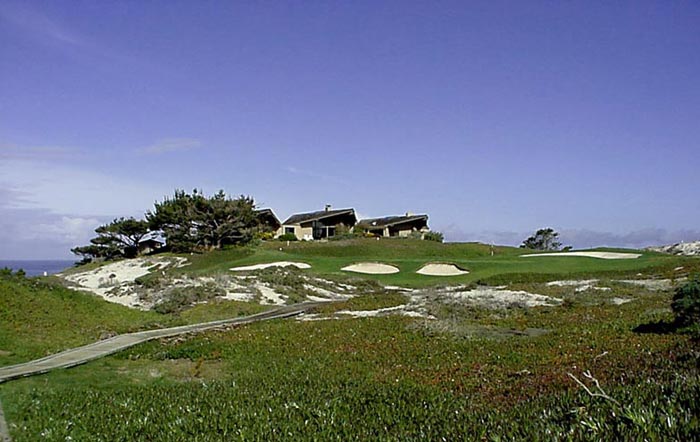 The fifth is the last of the dunesland oceanside holes. A stout wind affected Par 3 with deep fronting bunkers, O.B left, and if that’s not enough, a real pit of a bunker, back right. The green’s rightside section is no more than seven paces deep. The experienced, prays that their ball will use the green’s slopes to get below the hole

The Sixth; This par 4 turns back up the hill through a shoot of trees, resulting in a very demanding second shot. Prudent high handicappers will do well to play short of the green, and so will the accomplished, if out of position off the tee. The green’s sectioned steep slopes re-iterates the awareness and experience that is required to be successful for the remainder of the day.

The Seventh; Perhaps the only breather hole, this three shotter can perplex the golfer who may consider ‘going for it’. A pond guards short and left, of this narrow undulating green. 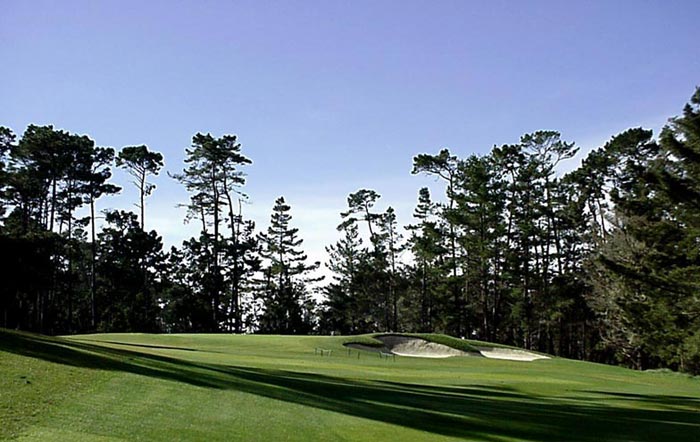 The Eighth; Lessons in perfect simplicity here. Finding the straight uphill narrow landing area is but a small percentage of the task at hand. The green’s front and right side deep bunker looms large in the minds eye of the golfer, and in a perfect counter intuitiveness, is where some should aim, due to the often tugged uphill lie approach. A front pin isn’t as easy of a target as it appears, due to one of the steepest slopes on the course. Caution, and playing plenty of break is required.

The Ninth; Another straight forward uphill two-shotter, plays longer than the yardage. Deep fronting bunkers guard both sides of yet another imagination inducing, awareness testing, well sloped green. Secret tip; With a back left pin, trust in the unseen ‘snack bar pull’.

The Tenth; Complete with it’s own version of an Eisenhower tree, placed left side in the fairway. This hole requires patience and prudence for a downhill par 4. The back half of the green slopes deceptively away from player and is dotted with green side bunker pits.

The Eleventh; A sharp dog leg right par 5 cut out of the forest. This hole tempts the good driver with a chance for eagle, yet few are ever carded. For those less capable, the lay-up landing area narrows and slopes increasing the challenge significantly. A relatively recent addition is a stairway bunker complex short and right of the large.green. Knowing ones limitations, on this hole, is an imperative.

The Twelfth: A beautiful downhill one shotter, with pond left and a hillside right. Once again, the green is masterfully constructed with deception abounding. Swirling winds are often the cause for many a mis-clubbing.

Thirteen; Through a narrow shoot of trees, this two shot hole has it’s own magical and deceptive lore. For the fortunate, bag pipe practicing can often be heard, and if that happens while the fog is in, no bigger smiles can be induced. A well placed drive is essential to have a mid to short iron in your hands, on approach. However, with the entire front of the green open, recovery with a fairway wood is not uncommon. This green will test every aspect of the golfer. From awareness to nerves, the green is large, well sloped and has several subtle sections. Interestingly enough the green’s settling evolution has caused most of the sloping and the sections. 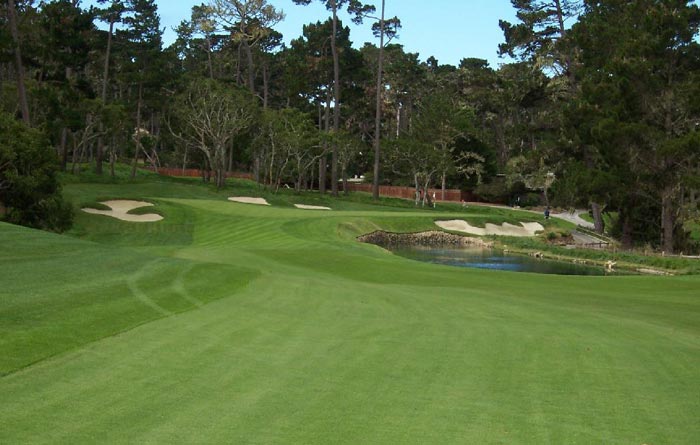 Fourteen; This three shotter begins at the highest point on property. Somewhat straight-ish, with a slight jog to the right in the middle of the hole. A pond guards the front right of the green. Allowing the golfer to use the severe slope on the leftside, to get their approach closer. Depending on the position of the approach, the sloping land dictates what the correct club selection should be, despite the yardage. 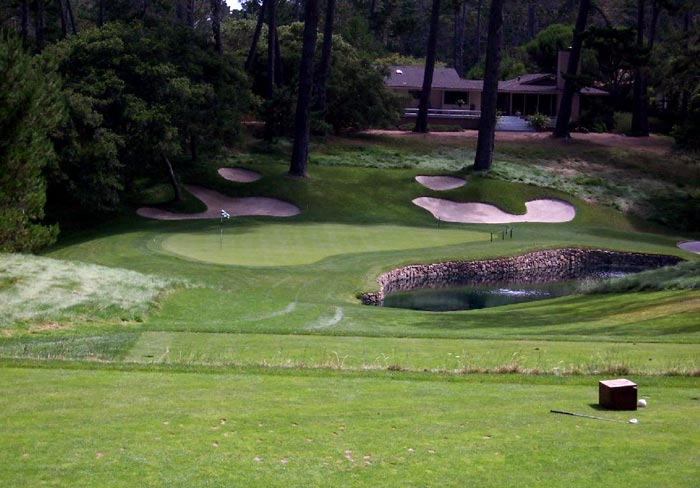 Fifteen; This short one shot hole commands respect. The pond short and right is a surlyn magnet. Even for balls that at one time found the putting surface. Three is a good score here.

Sixteen; This dogleg right two shotter has had extensive surgery since inception. Regardless, the hole still requires all the patience and skill the golfer can muster. O.B lurks left and straight off the tee. While side hazards receive any errant approach. The green is ample with simialr slopes and sections seen throughout the round. 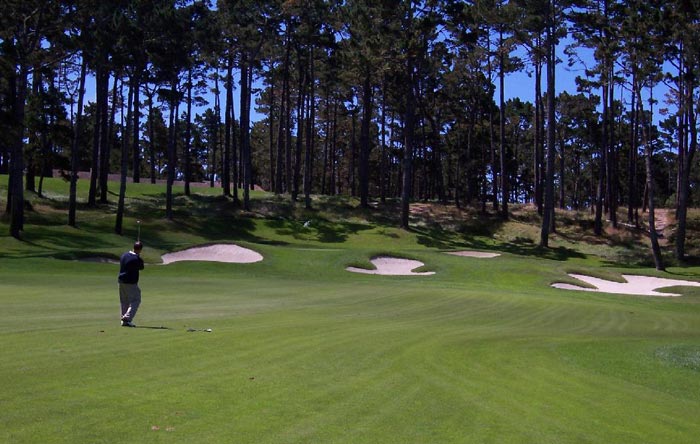 Seventeen; Short with a sharp dogleg left uphill, this par 4 has a green that asks the question, ‘Have you been paying attention?’ Be it swirling winds, or the ring of bunkers, getting on the putting surface is only half the battle, if not less. The severe back to front sloping green features a center spine separating the green into one big section, and one much smaller, on the right. 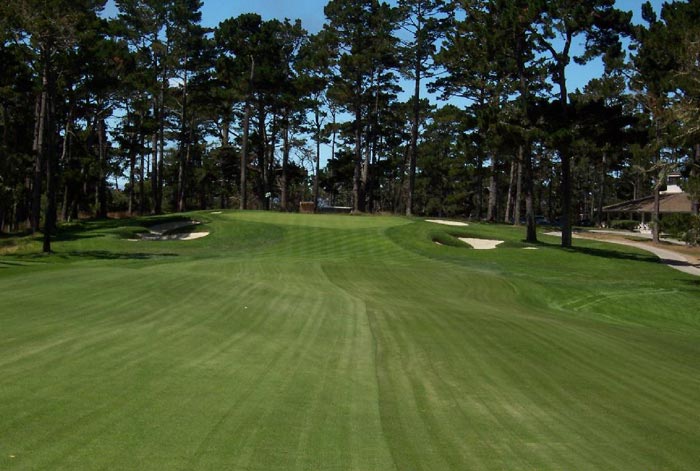 Eighteen: This straight, fairway bunkerless, narrow par 4 requires the golfer to show stamina, both physically and mentally. Especially after climbing the hill to get to the teeing ground. Sloping ground and the last of the great greens continually confounds even the most seasoned.

If one were to quantify the one thing that makes Spyglass Hill a world class venue, it would have to be movement. Movement of the ground, on the fairways and the greens, is at the heart of the challenge on this course. Combine that with wind, and you have the ingredients that make for great golf.