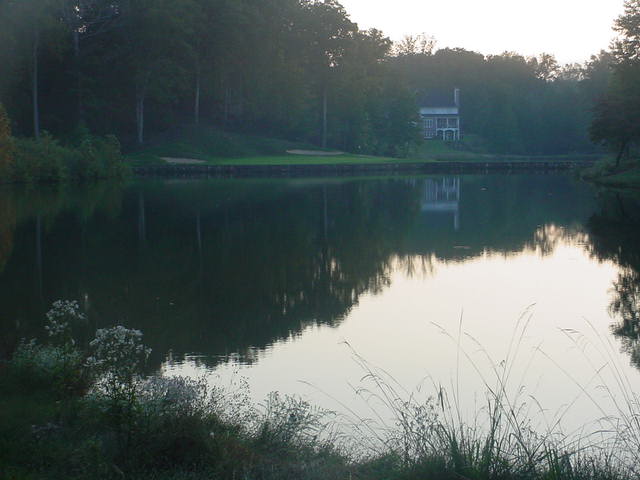 The all or nothing carry at the fourteenth.

My home course is Royal Lakes Golf and Country Club. I have played many rounds on this course and think it has the best design of any course I have ever played. It’s an American course with a Scottish accent (sod faced bunkers), and it has a lot of water. Auther Davis, the designer, did a great job on this golf course that is outside of Atlanta.

1 Hole (535 yards) Easing Out [Note: all yardages from the blue tees]: The first hole is a dogleg left par 5. A good drive will get you past the fairway bunker and give you a good view of the green. The green has a lot of undulations, but it will receive a wood as there is only a side bunker.

2 Hole (420 yards) Hard Right: This is a very tough, long par 4. There are two options off the tee: to make an easy straight drive and leave yourself about 200 yards to the green or to try to carry a fairway bunker and take a 150 yard approach. The green is not guarded by any bunkers, but it does have a hill on the left side which kicks balls down towards the woods.

3 Hole (495 yards) Nasty Edwards: This is a short downhill par 5 with a pond in front of the green. The drive is easy as the hills on either side of the hole usually kick the ball back into the fairway. The second shot is where the real decision begins. Do I go for a thin green with a pond fronting it or do I lay up? It’s tough to decide especially when the green looks thinner from the fairway and you know that over the green is either a hazard or OB. 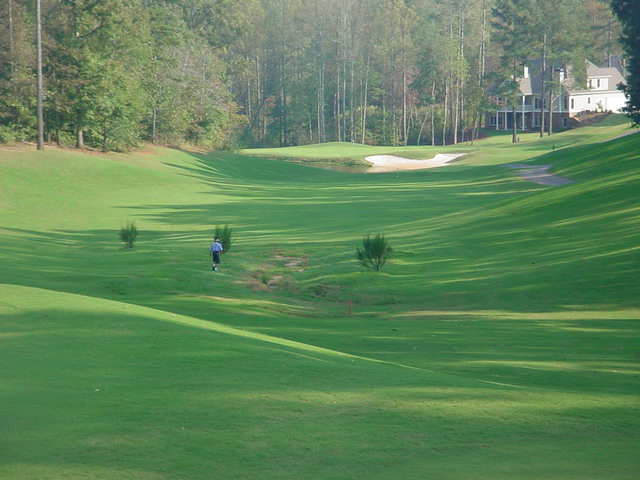 Notice how the hills on either side of the 3 hole kick the balls toward the fairway.

4 Hole (175 yards) More Club: This medium length par 3 is straight uphill to a big green. In the front there is a bunker and a false front, on the left and behind the green is OB, and on the right there is another bunker. It’s a tough par and an easy bogey.

5 Hole (360 yards) Roc’s Monsters:This hole was named after the two sod faced monster bunkers in front of the green. This is my favorite hole on the front side and it starts with a downhill tee shot. Longer hitters may drive this par 4, but it’s risky as OB abounds over there. The second shot is over Roc’s Monsters. There is a creek left and behind the green, so the only bailout is right. It’s a great short par 4. 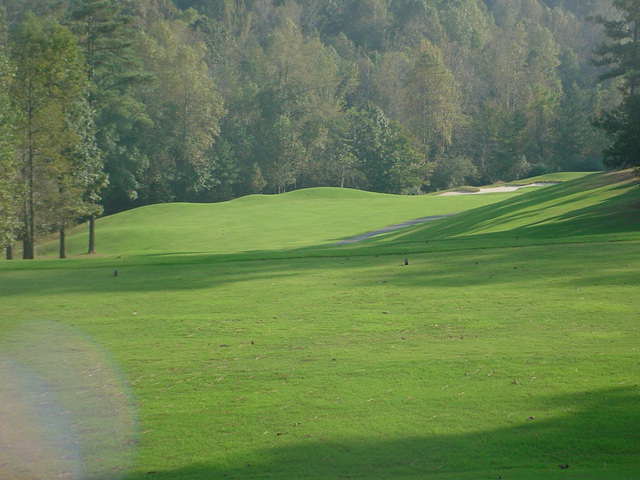 The inviting tee shot at the fifth.

6 Hole (320 yards) No Stairs: The second short par 4 is uphill. After the tee shot is in the fairway you are faced with a short pitch to a tilted green that has a big bunker in the front and another one in the back.

7 Hole (380 yards) Cut and Fill: The seventh is a tough par 4. On the tee you have the option of going for the top fairway which brings OB more in play but gives you a better view of the green, or you can hit it safely down the middle which gives you an uphill shot and a bad view of the green.

8 Hole (200 yards) Looks Short: This downhill long par 3 is actually pretty easy as the only real trouble is a right side bunker. On the green you get a great view of the ninth, the island hole, and the twelfth. 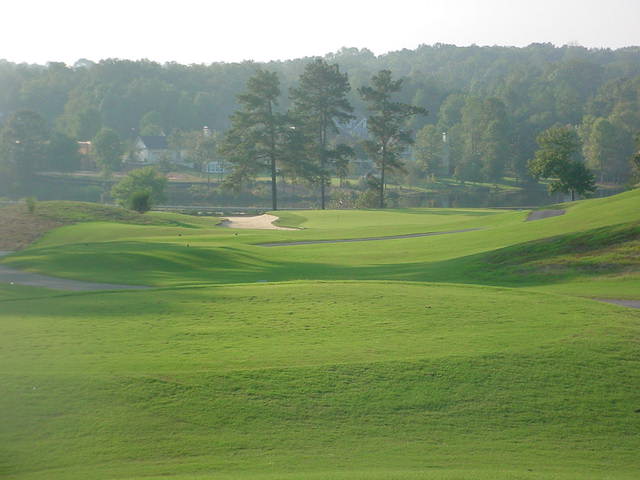 9 Hole (405 yards) Bolts Your Nuts: This watery par 4 is one of the toughest holes at Royal Lakes. On the tee shot you have water and a bunker left and OB right. The second shot isn’t any easier. It’s an uphill carry over water and sand to a horizon green with a v-shaped ridge running thru half of it.

10 Hole (400 yards) Hard Left: The tenth hole is dogleg left par 4. The green is guarded by a four and a half foot bunker on the front left.

11 Hole (490 yards) More Land Please: A perfect drive will put you about 215 yards away on this island par 5. From there you can either go for the island green in the lake or lay up to a peninsula of land about 125 yards away. This pitch shot closely resembles the tee shot on the seventeenth at TPC at Sawgrass. 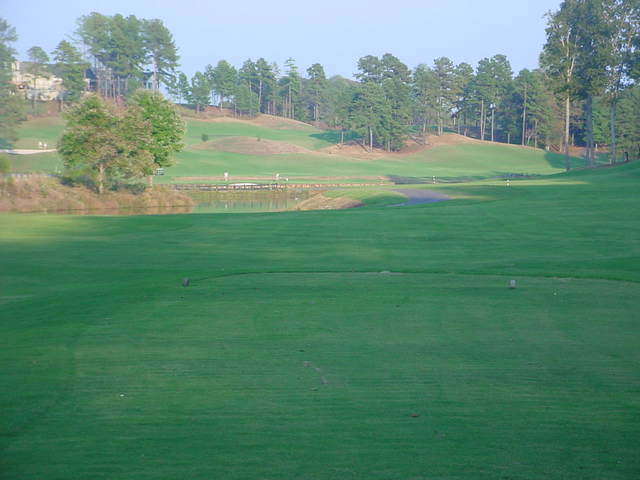 The challenge at the eleventh is to stay dry.

12 Hole (330 yards) Dam Green: The lake on the island hole is now on the right side of this short par 4. The tee shot is very hard because of the lake on the right and the bunkers on the left. The next shot is one of the best shots at Royal Lakes, a pitch to a green perched on a dam and guarded by water on the front right.

13 Hole (380 yards) Costa Rica: The par 4 thirteenth is the number 1 handicap hole at Royal Lakes, The toughness starts on the tee shot. OB is right and a creek is on the left. The fairway is very narrow and it slopes down towards the creek. The second shot isn’t any easier. It’s an uphill iron shot to an elevated green above a deep sod faced bunker. 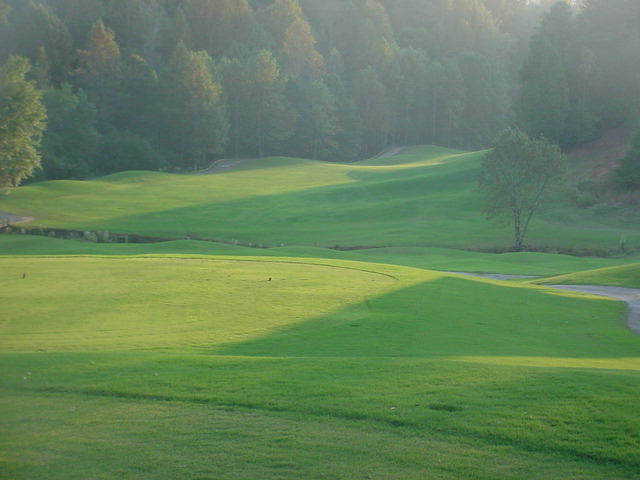 The tough tee shot on the thirteenth.

14 Hole (190 yards) On the Rocks: This par 3 is all over water and anything short is wet. The green has many undulations and it slopes downwards to the water.

15 Hole (390 yards) John’s Respect: The fairway on this par 4 doglegs left, goes around a mound, and leads to a green guarded by a side bunker. 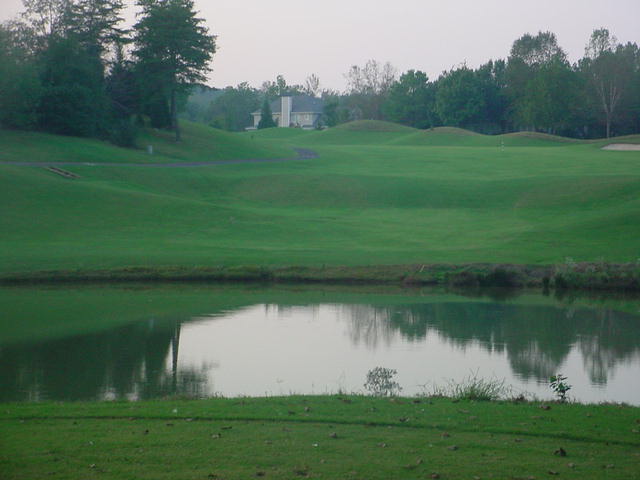 16 Hole (135 yards) Valentine: The shortest par 3 at Royal Lakes plays downhill. Kanon’s creek crosses in front of the green and anything short will usually find it. Three bunkers surround the large undulating green.

17 Hole (410 yards) Run Off: This hole has six bunkers. Three of them guard the fairway and three guard the green. The deepest of the six is right in front of the green and shots that carry it often run off the back of the green. 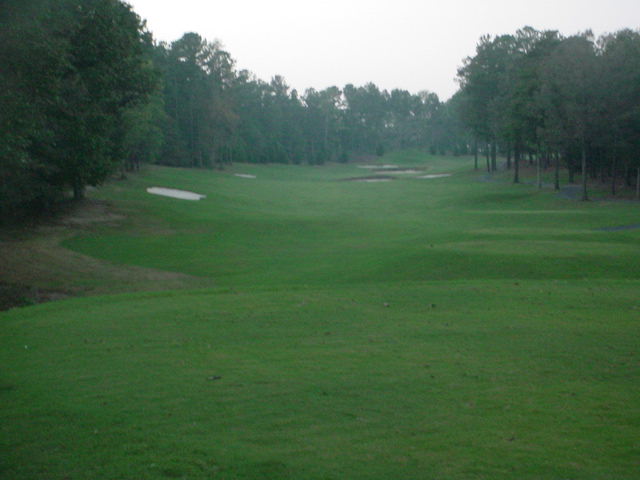 18 Hole (535 yards) Rollover Hogan: This par 5 plays downhill all the way. After you have found the fairway you can either try to reach the green in two by carrying a pond and the deepest bunker at Royal Lakes or you can lay up, and then pitch it over the pond that also guards the right side of the green.