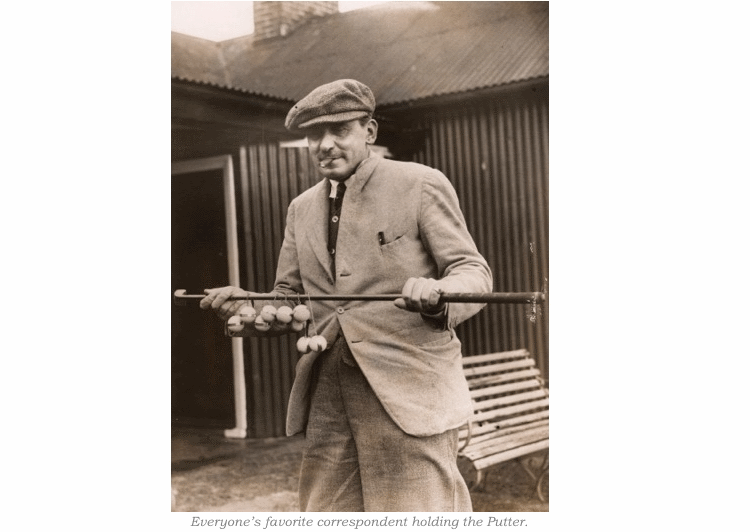 Its translation from Latin is straightforward: “First among equals.” The traditional, more informal translation emerged ages ago and reads: “He was rather lucky to win.”

The prize for winning the President’s Putter is a small silver medal, fit for the lapel of a dinner jacket, dangling from a green ribbon with contrasting stripes of light blue embracing dark blue. These are the ancient university colors of Cambridge and Oxford, respectively. A silver clasp connects the ribbon to the medal and bears the inscription “primus inter pares.”

The prize-giving ceremony is brief, easily missed by unseasoned spectators not paying close attention. It occurs near dusk on a Sunday in early January, on whichever hole at Rye Golf Club the winner of this match-play competition has just closed out his opponent in the final. The Captain of the Oxford & Cambridge Golfing Society approaches the winner and presents him with the medal. In exchange, the Captain receives the winner’s golf ball. The victorious ball is then hung by a silver chain from a wooden-shafted putter donated by John L. Low, President of the Society when the competition began, displayed in the club house at Rye for members and guests to see.

There are now three implements required to support the festoon of balls collected through the years — but the original President’s Putter was used by Hugh Kirkaldy to win the 1891 Open and by Low himself in the final of the 1901 Amateur before being sent to the stud. Low, the founding Captain of the Society and author of the first golf biography ever written (the subject being the late amateur Freddie Tait), among his many influential achievements in golf, coined the phrase “primus inter pares” for use on the medal.

A precept born from a classical education; a sense of equality among those who participate, regardless of skill or age; an acknowledgement that luck must play a heavy role in one’s successes; a prize-giving without ornament: these qualities mark the essence of the President’s Putter, the annual meeting and principal competition of the Oxford & Cambridge Golfing Society.

Founded in 1898 as an itinerant group, the Society plays matches against current teams from each of the two universities, prestigious clubs and, as they were formed, other like-minded golfing societies. Rye has been the Society’s spiritual home from the beginning, but it was not until 1920 that the Society established an annual winter meeting on the East Sussex links. Barring interruptions for war and the rare snow fall, that meeting continues at Rye each January, to this day. 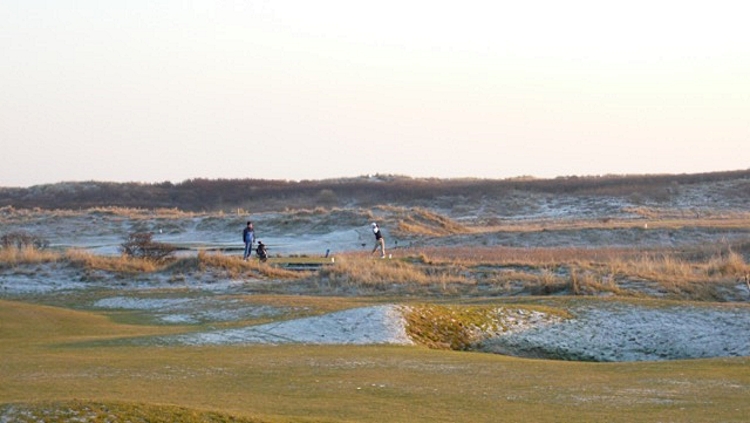 It’s January – what do you expect?!

Past winners include some of the great and good of British golf, men who led as players, administrators and chroniclers of the game: Cyril Tolley, Sir Ernest Holderness, Bernard Darwin, Roger Wethered, Leonard Crawley, Laddie Lucas, Gerald Micklem, Tony Duncan, Gordon Huddy, Ted Dexter, Donald Steel, and Michael Attenborough, among others excluded by the corresponding flaw of such lists. Many were Walker Cup players and captains, Amateur champions, captains of the R&A. The reputation of the Putter and the Society rests on the shoulders of their achievements.

Yet the President’s Putter retains an allure in this modern age not just for the first-class golf it produces on Saturday and Sunday of the competition, but also in the balance struck on Thursday and Friday, with an aspirational standard of golf displayed by Society members ranging from freshly minted undergraduates to established pensioners who hope to make it to the weekend.

The attraction of the President’s Putter as a gathering of friends in golf, as opposed to any old match-play knockout tournament held in the dead of winter, is that no matter how well or how poorly one performs, four or five days of competitive playing, eating, drinking, spectating and speculating about everything having to do with golf at a time when there is very little golf to be had remains on offer for those who choose to participate.

To participate, one must be a member of the Oxford & Cambridge Golfing Society, which generally means that person attended either of the two universities as a student and represented one side against the other in the annual university golf match, first played in 1878, thus earning a full “Blue” or varsity colors. Though no woman has yet won the Putter, a number of women are members of the Society.

The Putter, as the week of festivities is often called, traditionally begins on the first Wednesday after the New Year, either with practice rounds at Rye or with the Croome Shield, a casual 18-hole, foursomes stroke-play competition established in 1932 and open to any two members who attended the same college, though the two partners might have matriculated decades apart. Oxford and Cambridge are made up of 38 and 31 individual colleges, respectively, so there is plenty of choice.

The competition for President’s Putter itself — singles match play at scratch — begins on Thursday with rounds at Rye and, due to the size of the field, at the friendly and welcoming links of the Littlestone Golf Club, just up the coast in Kent. It continues apace at Rye with two rounds on Friday and Saturday, finishing with the semi-final and final rounds on Sunday.

For those knocked out Thursday or those who did not enter the Putter proper, the President’s Plate is a foursomes Stableford competition played over Rye’s Jubilee Course that takes place on Friday, as it has since 1980. 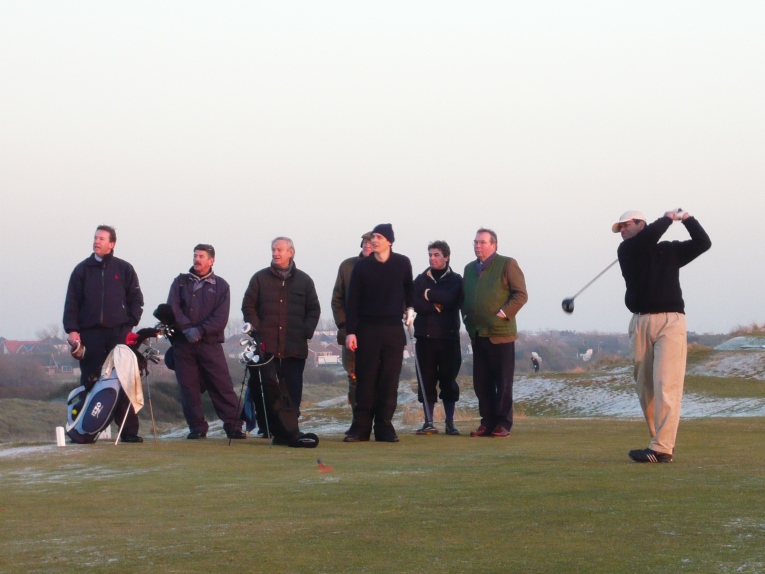 The President’s Putter is categorized by strong players and knowledgeable spectators.

The Secretary’s Niblick, the fourth competitive event of the Putter week, has been played for since 1933. It is a foursomes knockout competition with a blind draw for partners that begins on Saturday. A distinctive feature of this competition is the 9-hole “sprint” matches often required Saturday afternoon before establishing the semi-finalists for Sunday. The trophy is a most peculiar prize, taking the form of a pie-plate niblick clubhead, attached to a spiked grip via a corkscrew shaft. Fortunately, the handsome tie clips presented since 1968 offer much more functional spoils of victory.

What of the weather? The weather on the Southeast coast of England in early January is a capricious, ever-present cynosure, as centuries of invaders from both sides of the Channel have learned. Yet as often as the weather presents a competitive challenge in the form of lashing rain, fog, or winds rushing in unabated from the Urals, not to mention a frozen links peppered with bright yellow golf balls, it is quite often a pleasant surprise in the opposite direction, with a temperate climate presenting Rye on days of long shadows and bright sunshine as Britain’s finest winter course.

Rye is positioned on the rippling ridges of the Camber Sands near the mouth of the River Rother and possesses a beguiling par of 68, featuring five one-shot holes, balanced by a testing collection of all but two of the remaining 13 long holes being in excess of 430 yards. It is a truth universal that the hardest shots at Rye are the second shots on the par-3 holes. 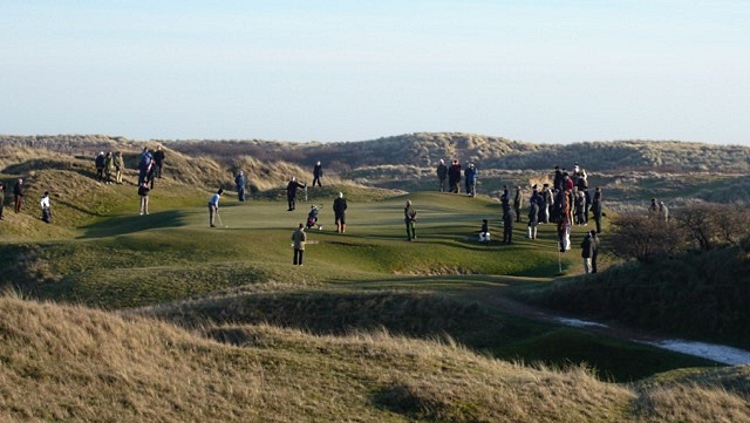 One of Rye’s bedeviling par threes.

A dozen players made up the first field in 1920. Nearly a century later the average is roughly 140 participants from a membership of some 750 who play annual matches against other clubs and groups throughout the UK and USA, with occasional tours to far-flung locales. Through the years the results were covered heavily by all the major papers and golf periodicals, though demands on print publications and the shorter attention span of the modern sports fan have diminished the coverage. Recent features from Golf Digest, the Wall Street Journal and even the European Tour have ensured that new, broader audiences still learn about the eccentric traditions of the Putter.

With what is frequently decades of age between many competitors, it is the multi-generational aspect of the Putter that helps it endure. A favorite personal anecdote from the competition: several years ago your author was playing a young undergraduate, age 19, who had earned his Blue and been elected a member of the Society the previous March. Walking down the first fairway at Rye our match was joined by Peter Gardiner-Hill, an éminence grise of the Society, having been a past Captain and President, doubling the feat at Rye Golf Club itself and having served in noble leadership roles at the R&A.

Knowing the author already, Gardiner-Hill took an interest in the toeheaded youngster with bright red stockings under his plus-twos and asked, “Where are you from, young David?”

“And where do you play your golf?”

“At Gullane, sir, and a little course in Fife you may not have heard of called Elie.”

“Ah, Elie,” replied the senior member. “When I was Captain of the R&A I gave my first speech at Elie.”

Walking further down the fairway, laughing at the earnest but unanticipated faux pas, your author observed to young David that Gardiner-Hill, in his late-80s at the time, once knew men who were the founding members of the Society in 1898 and that he, just 19, will hopefully have the advantage, in the decades hence, of telling this story to subsequent generations of new members, saying that he had a personal connection, once removed, to the pioneers from the 19th century.

The vast majority of the participants, with added color from many old-timers who no longer compete, attend the Society’s annual dinner, a black tie affair at The George Hotel in Rye on the Saturday night, chosen because it is just about the only place in the medieval citadel town that can hold everyone. Speeches after dinner are famous for being either particularly good or particularly bad, with casual betting among individual tables as to how long all the speeches will run in total. The winners’ proceeds are always re-invested at the bar after dinner for the benefit of all.

After the Putter ends on Sunday, after the brief ceremony anointing a new Primus, the drive home leads west toward London for many into the early dark horizon of winter. It is usually long, tiring and empty. A full week has passed, filled with generous portions of serious fun. The New Year is upon us and another President’s Putter has come to an end. What a shame that the best week of the year is always the first. 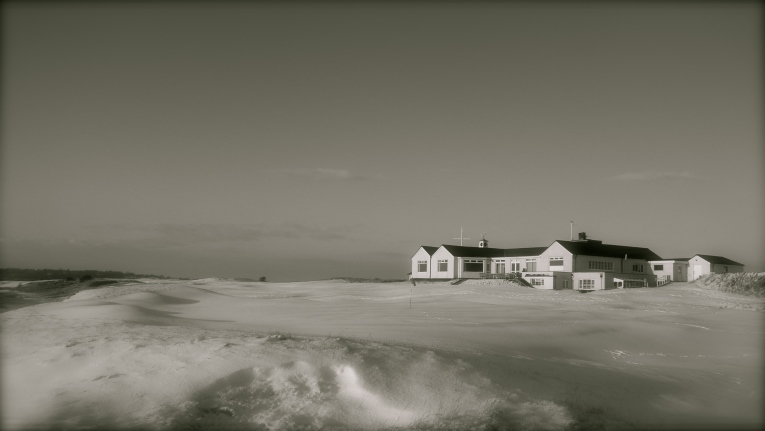 The finest spirit and traditions of the game are upheld at Rye Golf Club.

The author first learned of the President’s Putter from Gene McClure, a longtime USGA volunteer from Atlanta, Georgia; he first read of the eccentricities of the event as interpreted through the words of Herbert Warren Wind in his seminal New Yorker essay about the event, “An Entirely Different World” in Wind’s 1985 anthology Following Through; his first exposure to the Putter as a spectator was in 2006 as a graduate student at Cambridge; his first match as a member of the Society was in 2009 and his competitive record lags embarrassingly far behind his appreciation for this unique event, which he continues to attend annually.