Sweeney, Mike – Blending Old and New in Renovating a Classic

Sweeney, Mike – Blending Old and New in Renovating a Classic

Blending Old and New in Renovating a Classic

Mountain Lake is located in the ridge country of Central Florida, just outside the small citrus town of Lake Wales. A Baltimorean named Frederick Ruth founded Mountain Lake in 1915. With proximity close to trains from the North which would bring residents down for ‘the season’, Ruth assembled 3500 acres and engaged Frederick Law Olmsted, Jr. to lay out 600 acres of the property for the residences and Seth Raynor to design the golf course.This same trio also went on to design and develop Fishers Island in the 1920’s. There are some notes in the archives at Mountain Lake that Ruth spoke to Donald Ross (who did nearby Lake Wales Country Club) prior to selecting Raynor, however Raynor was chosen and Mountain Lake became the first development of its kind. 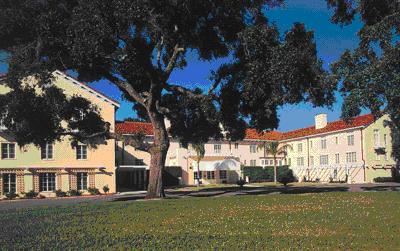 The Colony House, Mountain Lake’s clubhouse and lodge is on the National Register of Historic Places. In the mid 1920s one of the owners of a home at Mountain Lake was Edward W. Bok, the Publisherof The Saturday Evening Post and The Ladies Home Journal. Desiring to make a lasting contribution to his new homeland, he acquired over 100 acres of the highest land of the park and created Bok Tower Gardens. The Bok Tower is a frequently seen landmark at Mountain Lake.

According to John Caldwell, author of ‘Mountain Lake’ in 1986, Raynor came to Florida for the first time in his life in the Spring of 1915, where he met by Fred Olmstead and they toured the Belleaire Hotel’s two 18 hole golf courses in Clearwater, Florida. Over at Mountain Lake, Olmstead and Raynor walked the projected course often together, and at night Raynor would sit down with Olmstead’s contour map to piece the course together. By mid-May of 1915, Raynor and Olmstead had the course design incorporated into the overall plan. Models were then built by Raynor and sent from Southampton where holes 1-6 and current 16-18 were completed by December of 1916. As funding was tight, the course played as 9 holes until May of 1920 when Ruth wrote Raynor that it was time to complete the second 9 holes. On October 2, 1920, Ruth played the first 18 hole round at Mountain Lake. The basic design has been altered from time to time. However the first major changes were made by Charles Banks in 1929 and again later by Olmstead Brothers based on a report written in 1952.

Seth Raynor moved very little earth at Mountain Lake. The holes sit on rolling terrain not typically associated with Florida. As stated by George Bahto in The Evangelist of Golf, ‘If any observation can be made on the differences between a Macdonald and Raynor course, it would be that their tendencies mirrored their personalities. Many of Raynor’s interpretations of Redan, Alps, or Cape were more understated.’ Clearly Mountain Lake reflects Raynor’s personality.

Most of the greens at Mountain Lake had been modified over the years, and many bunkers were removed. Architect Brian Silva, Former Greens Chairman Boris Meditch, Current Greens Chaiman Ned Young and former Superintendent Steve Ciardallo led the rediscovery of Raynor’s Mountain Lake course.As Brian Silva stated in Links Magazine, ‘Anybody who had seen just one Raynor golf course and then buzzed over Mountain Lake in a fighter jet would know the greens had been changed.’ For the restoration that took place in the summer of 2002, Silva used vintage aerial and ground photos to guide the work. The early photos showed many of the Raynor classic greens as well as a golf course that originally was more profusely and randomly bunkered. These bunkers, in concert with the greens, gave the original golf course much of its playing interest, drama and shot values. Thus, the question was how to bring it back. 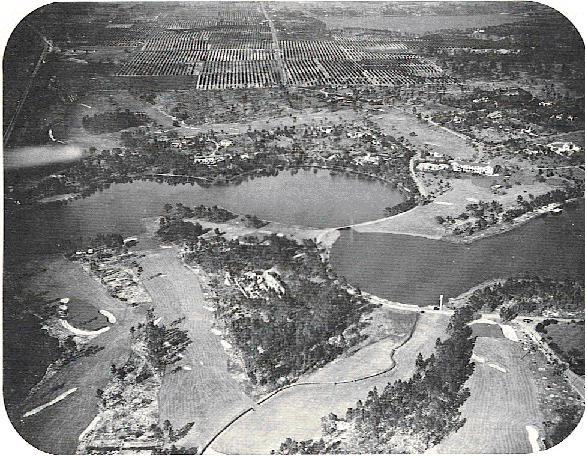 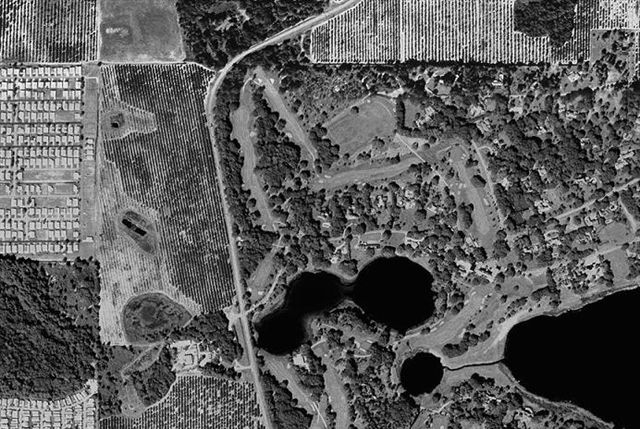 Aerial of Mountain Lake Prior to Restoration – January 1999

Mountain Lake Pro Jonathan Powell tells the story of how on his ‘playing interview’ at Mountain Lake, he asked if the directional fairway bunker on #1 was in play. The members answered ‘no’, and he promptly put his first ball into the directional bunker! Thus, the Raynor strategy session begins for both the Pro and Amateur. Similar to the 1st green at National, getting to the green in two is just half the battle as placement on the correct segment of the green is key to make par. Inspired by Macdonald, this hole is named for the Double Plateau green design. It’s three greens in one and well-known examples of it are the Long Island Sound-backed 9th at Fishers Island and the 17th at Yale Golf Course. Early ground-level photographs illustrated that the first green at Mountain Lake was originally a Double Plateau. The greens at Mountain Lake are covered with Tif-Eagle grass, and the course typically has a touch of brown in the fairways and rough, allowing the course to be played firm and fast – a Tom Paulian-like ‘Maintenance Meld’. According to GCA Donyen Tom Paul, ‘The Old Course, Crystal Downs, Yeaman’s Hall, National, Cuscowilla, Mountain Lake and Pinehurst No. 2 owe a significant part of their greatness due to boldly contoured greens, and imaginative greensites that become unplayable if the putting surfaces roll too fast.’ 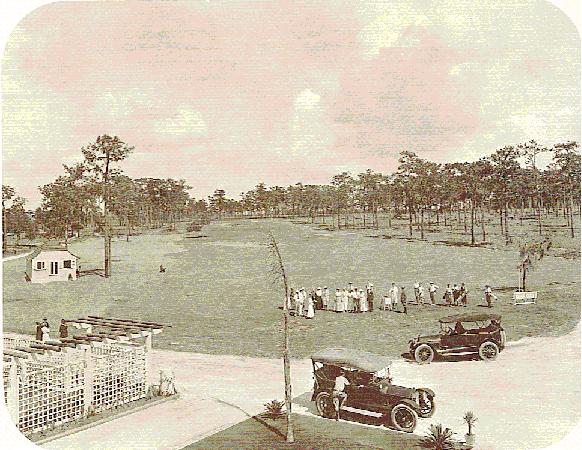 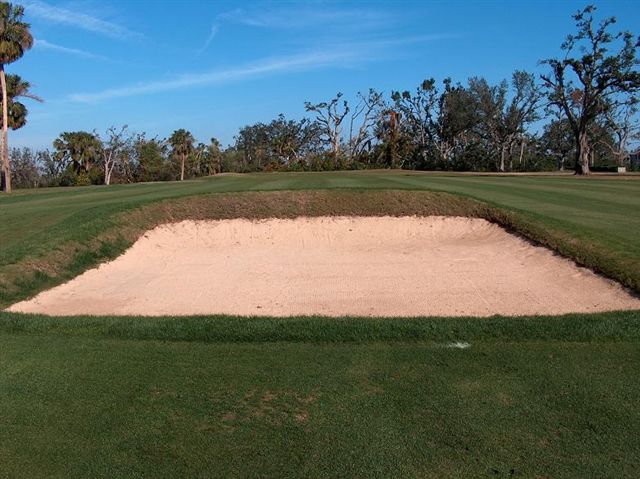 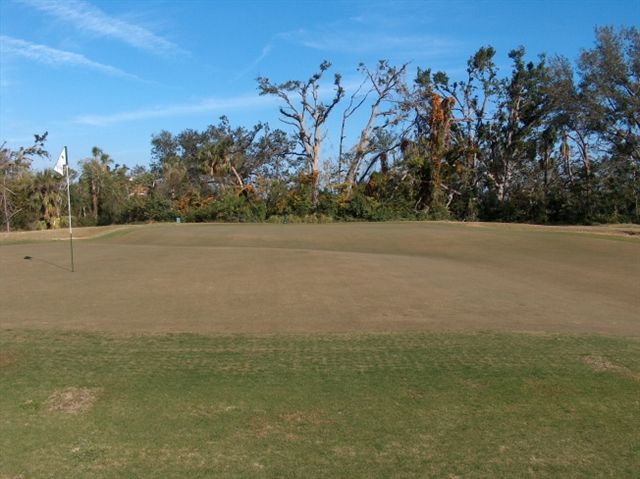 The second hole is the first of many long fours on this ‘short’ course. The tree on the right comes into play for the back tees which are back and right of this photo. The tree lost much of its ability to grab balls from the sky due to the hurricanes of 2004, however it should return back to its former glory in a season or two. When it does, the safe play is to the left which brings the left fairway bunkers into play. 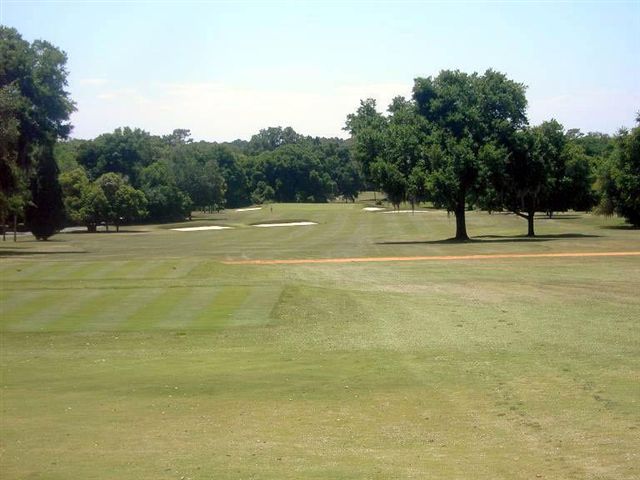 A strategic tree on Mountain Lake #2 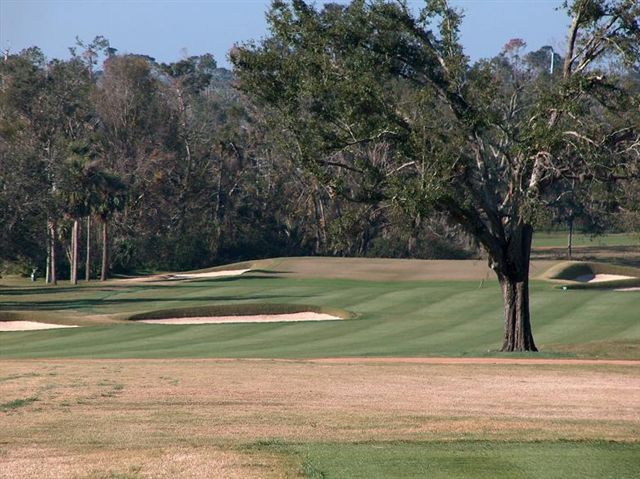 Raynor allows the player to bounce balls into this green to compensate for the shorter player who may not be able to navigate this green with an aerial shot. The depression in the green that works from the center of the putting surface out to the front edge resembles a thumbprint, made famous by Raynor at Yeaman’s Hall 10th green.

While there is a depression in the fairway that gets flattened out by the picture, it is difficult to understand why #3 rather than #10 was named Alps by Raynor. Regardless, it is a strategic shot off the tee, and depending on how far the golfer hits it, a slice or a draw may be preferred. However, right side of the fairway is the preferred area for a second shot into the green. Brian Silva states that the third green was the least changed over the years, however the original was deeper. 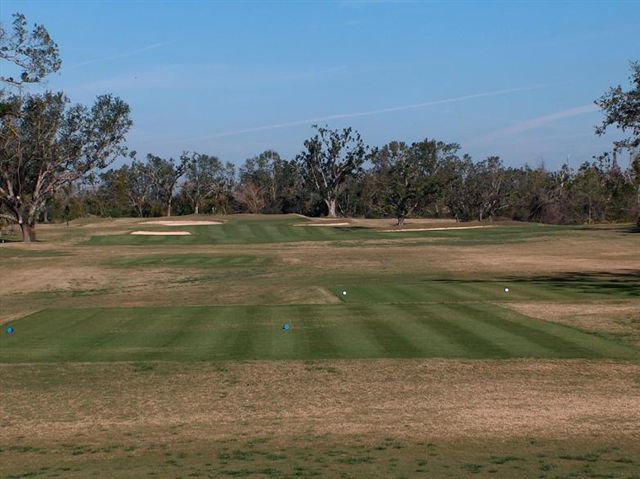 Distance of the golfer determines draw or fade off the tee. 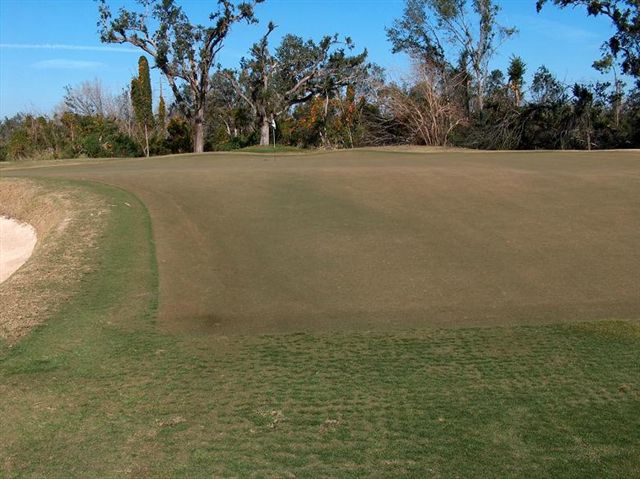 At 567 yards from the back tees, Long is a most appropriate name for this hole, as well as being a hole name frequently used on vintage courses. 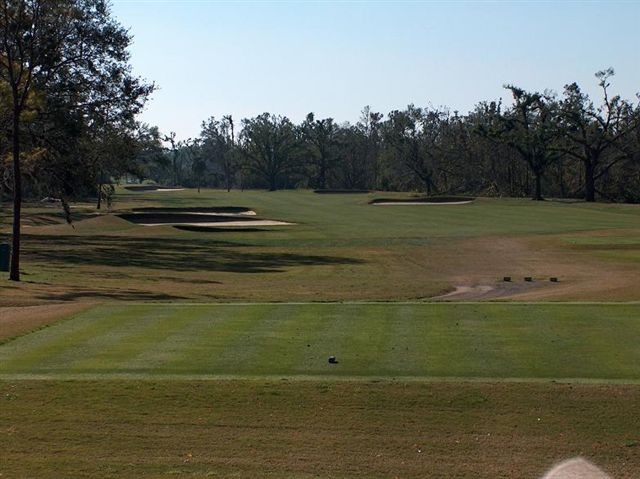 The tee shot on #4 shows off Silva’s fairway bunkering work.

‘When there is a unanimous opinion that such and such a hazard is perfect, one usually finds it commonplace.’ C.B. Macdonald, Scotland’s Gift – Golf.

The photo below gives a good view of the angular nature of Silva’s work at Mountain Lake. Some Raynor purist will argue over the angles of Silva’s bunker work, but Silva clearly brought back a penal nature to the bunkering, which was an overriding principal of Seth Raynor via C.B. Macdonald’s philosophy. As opposed to the famous 9th at Yale, the Biarritz at Mountain Lake plays on a flat piece of property. The green had lost its swale before the Silva restoration, and the bunkering was changed over the years. Silva brought back the Biarritz green, and now if the pin is placed on the back or front of the green, the hole gives the golfer the option to run the ball to the green or play an aerial shot. 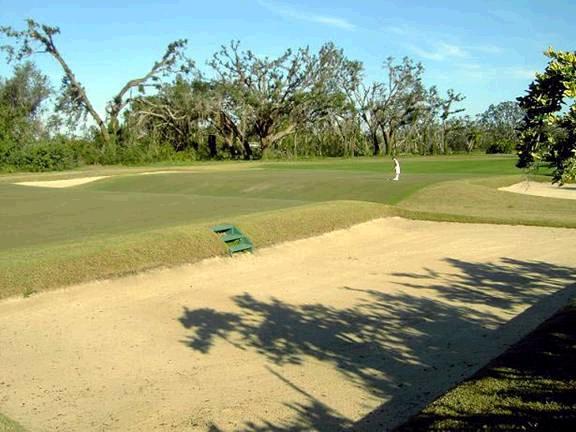 The golfer is on the front part of the Biarittz green putting through the swale to the back pin placement. The above photo was taken in January 2005, after the hurricane season of 2004 where some trees were lost, and all trees lost most of their leaves for the season. Next season, the leaves should be back.

Taking its name from the body of water encountered on the tee shot and the nearby front gate, Gate Lake shows the tendency in vintage course architecture to develop hole names from natural features found on the course. While the modern golfer has no real problem clearing the lake, the tees slide toward the right and forward to provide easier, yet still Buczkowskish (heroic), tee shots for players who are shorter off the tee. 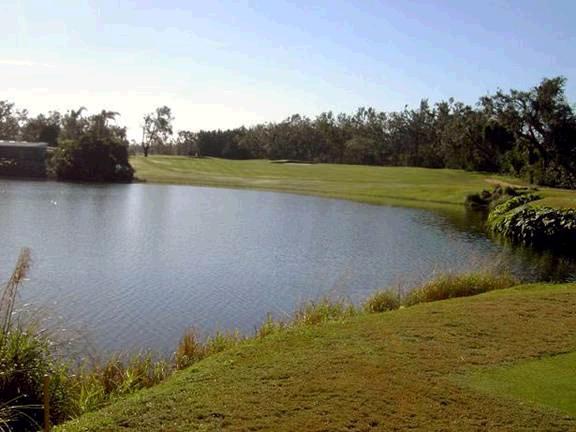 Water and a tighter fairway can grab the golfers ball here at #6. 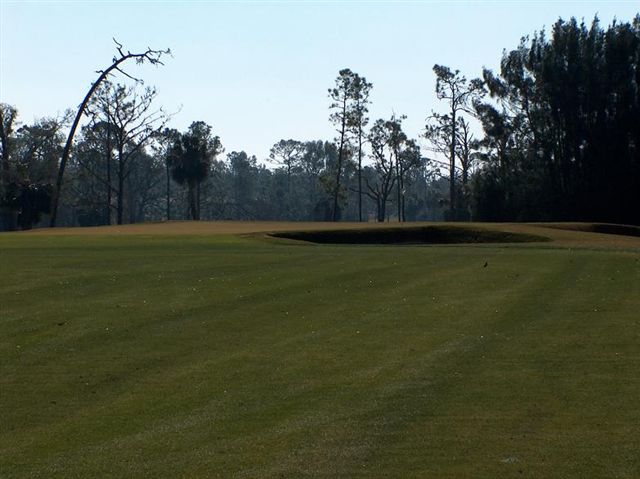 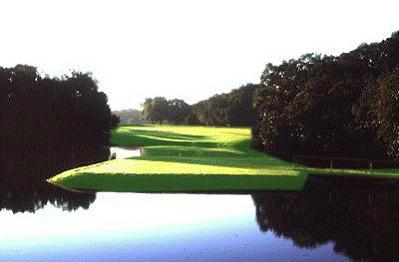 After Seth Raynor’s death, Charles Banks came back and made a few changes to Mountain Lake. The #8 Raynor is actually a combination of two original Raynor holes. The current par five uses the island tee position of an original par four and the green position used originally on a par three. At 528 yards and firm conditions, the modern player is inclined to go for it in two. However similar to #4, the smaller well protected green creates interesting strategy that starts on the tee. Do I play a two or three shot hole? 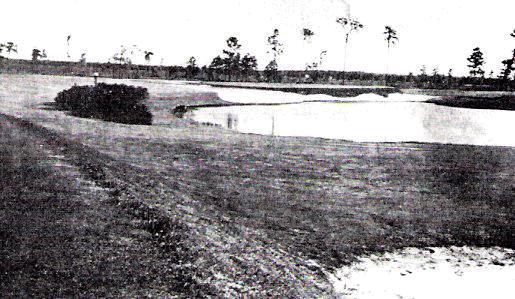 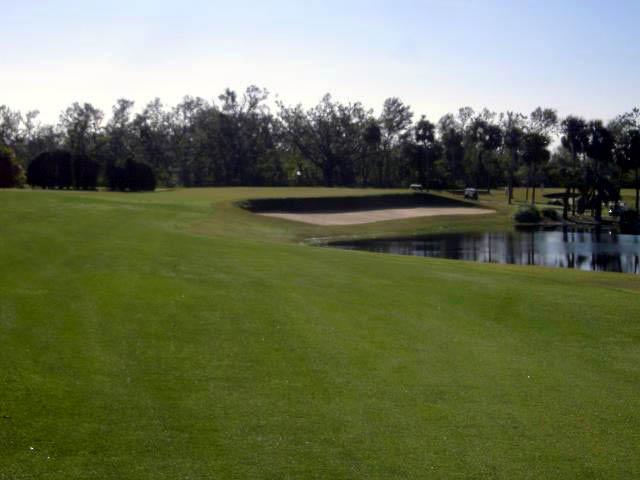 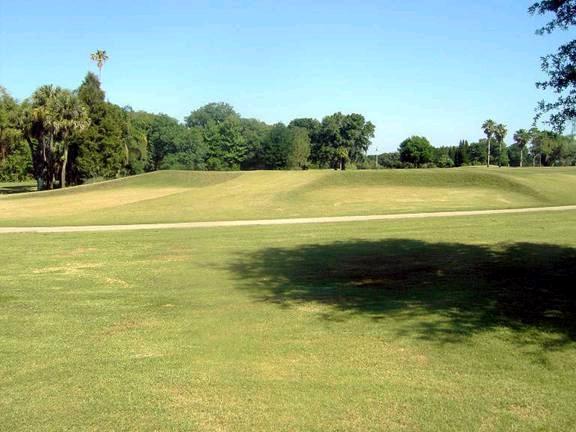 Being long on #8 brings two grass bunkers into play!

This hole was added by Charles Banks when the current 8th was created. Based on the 4th at Royal West Norfolk, the Raynor/Banks collection of shorts include greens that feature horseshoe shape or thumbprint depressions such as the 9th at Mountain Lake. Fine examples of Short include the 10th at Chicago (with its two rounded depressions) and the 6th at Lookout Mountain. 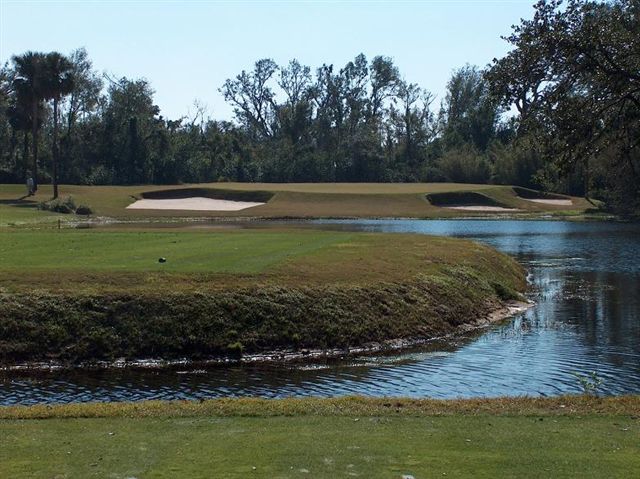 Bok Tower looms over the fairway trees, and can be used as a driving marker on #10. During the renovation, the hole was converted to a Par 4 from a Par 5. The strategy off the tee calls for a Buczkowski (‘heroic shot’) over the right bunkers to cut the distance on this long par 4. Too far left and safe and bunkers loom there too. The Up green is one of the few greens that was left as is by Silva. The raised green on an uphill hole once again give pause to the concept of Mountain Lake being ‘short’. Any and all pars are welcome. 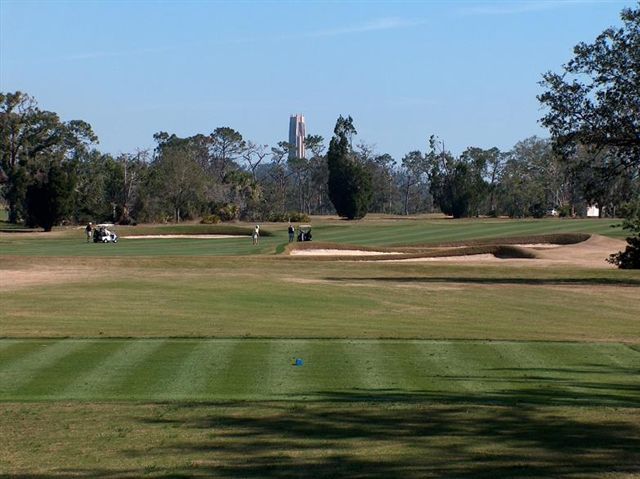 This new mens room was built to replace the old mens facilities that were in need of updating. In the tradition of Mountain Lake where history and hertiage is valued by the membership, the original door was salvaged and was then used in building this new structure! 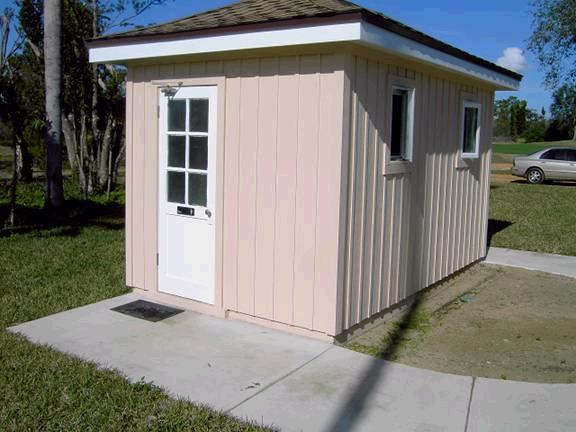 Old and New at Mountain Lake

The word ‘Redan’ was coined to describe the 15th at North Berwick and Raynor outfitted his examples with exaggerated ‘kick-back’ slopes in the approach and front section of Mountain Lakes Redan. The 4th at The National and the 6th at Yeamans Hall are wonderful examples. 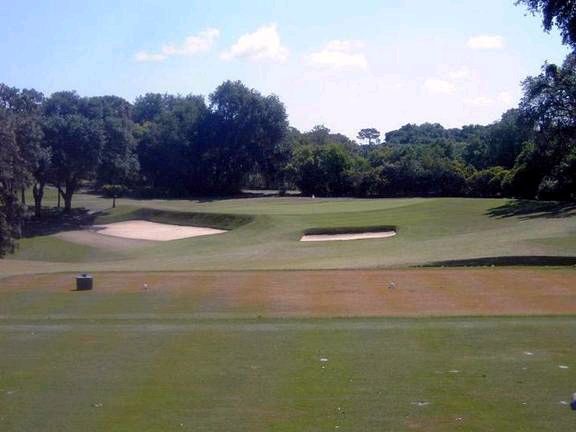 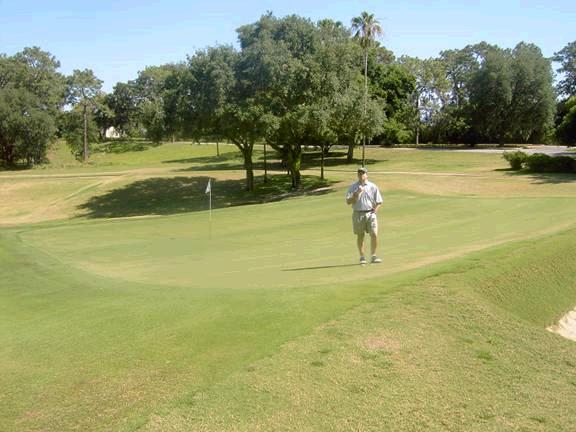 on the front right corner of the green gives some just how steep Mountain Lakes Redan plays. 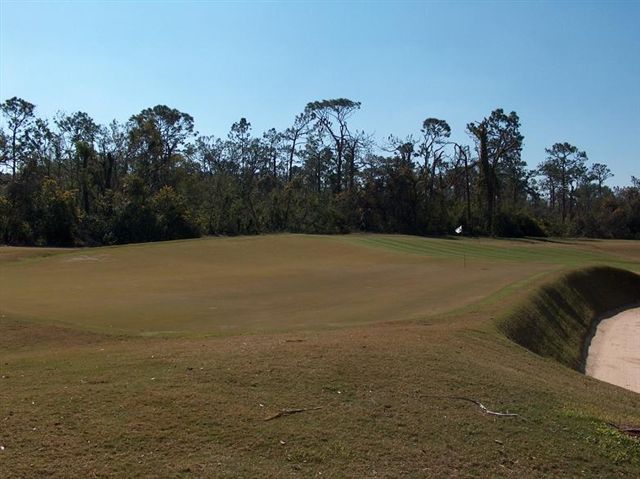 shows the updated contours of the Redan green 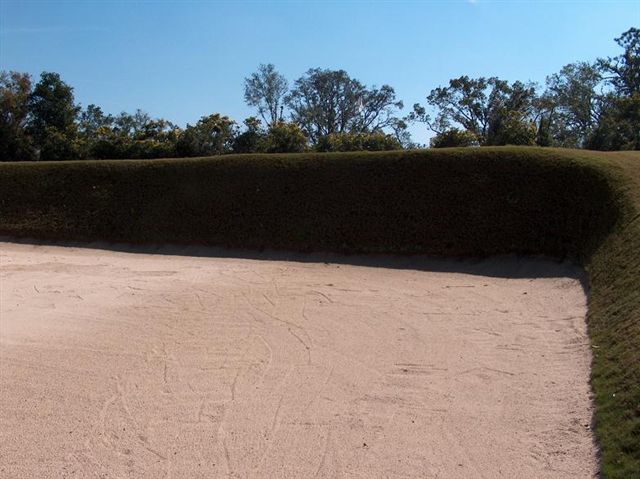 the Redan green from the Bunker

With a blind shot off the tee and framed by two bunkers, the 12th hole at Mountain Lake reminds the golfer of the 17th hole at Yale. Once again, the modern golfer is tested on this ‘short’ course. 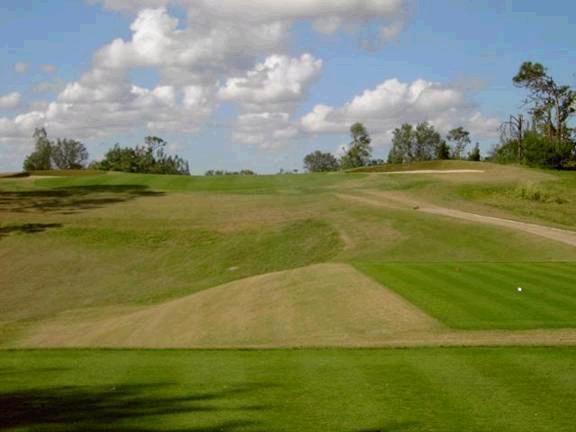 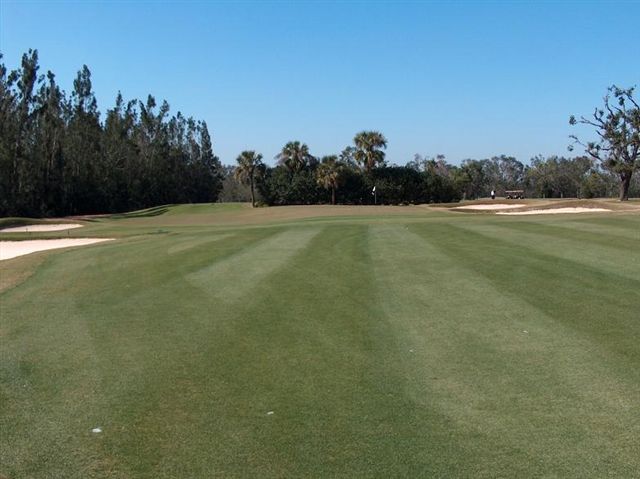 the 12th shows off the two tier nature of the green 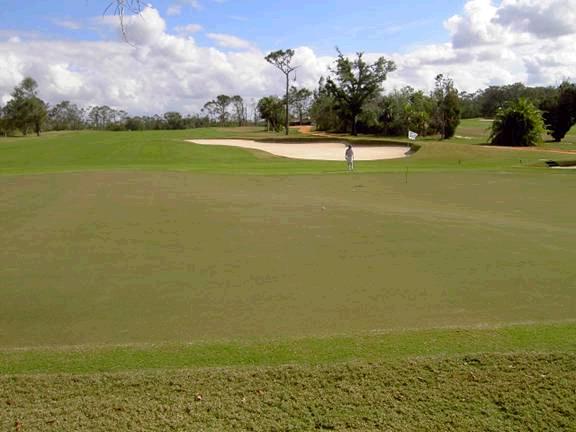