John McEntee Bowman hired Walter Travis to design two golf courses at the Westchester Biltmore Country Club (West and South) and the firm of Toomey and Flynn to construct the courses. Travis had already transitioned from his playing career as an amateur to designing golf courses as Westchester was his 11th design project.

As a golf course architect, Travis appreciated the great links courses in Great Britain. In particular he understood how the natural contour of the land was used along with strategic placement of hazards to yield 18 unique holes with 18 different, undulating greens. The hilly terrain at Westchester provided a perfect setting for Travis to route the West course with unique, challenging holes. Travis’ own words best describe his guiding principles for designing a golf course both for amateur and tournament play.

‘Golf course architecture in its highest development is both an art and science….It is an art to lay out a golf course to the best advantage; it is both an art and a science to design and construct the putting-greens. In my opinion, the guiding principle in laying out a course – I will even go so far as to say the only correct one – is to so arrange the hazards, both through the green and in the fashioning of the framework of the putting-greens, as to penalize one stroke, not more, the good shots of good players which are not quite good enough. Never store up trouble for the average player. Rather, make it as easy for him as possible (except on short and three shot holes) by providing an avenue of play free from trouble whenever it is possible to do so without sacrificing the par value of the hole. Even on short and three-shot holes a zone of safety should be provided, if practicable. Which simply means that the poorer player has the option of going for it or paying a penalty of one stroke for the privilege of playing safe. Therein really lies the whole art of designing a course which appeals alike to all classes of players, from the crack to the dub.’ Golf Illustrated, April 1922.

Travis required all players to think. His use of trees and sand bunkers guided players providing many routes to the hole. Similarly his courses had multiple tees to increase diversity of play. Travis’ greatest strength as an architect was the design and construction of putting greens. He believed that no two greens on a course should be alike and that no player should three putt because of faulty construction. His designs gave contour to putting surfaces while permitting the surfaces to be receptive to approach shots. For the best outcome, the accomplished player needed to be accurate, to shape shots to be in optimal position to play approaches to small, protected undulating greens and to be able to putt. The player with a powerful, strategic mind excels on a Travis course.

Travis routed two courses on the Westchester Biltmore property. The West course was designed to be a championship course; it was constructed with additional greens and sand bunkers for reversible play (1A + 1B). The South course was much shorter than the West and accommodated all players. Travis’ intent is captured in an interview for the New York Times in 1919.

‘The shorter course is laid out more especially for the average player. No two holes on either course are alike, nor yet, the putting greens. Many of the holes are provided with two, three, and, in one case, four tees, to be used according to wind and weather conditions. A lake is being constructed, designed especially for golf. These water-hazard holes – there are three of them – are most inspiring. One of them has two alternative lines of play and another no less than four.’ September 7, 1919.

The property in the 1920s had relatively few trees. Travis used numerous sand bunkers with elaborate shapes in clusters to direct the player providing alternative lines of play. The major change that occurred in the past 75 years was the removal of many fairway bunkers and the planting of thousands of trees. This evolution, shown in the aerial photographs from 1925 and 2000 (2), has not affected the routing but has changed the open views of the natural terrain and the nature of play. Sections below will provide examples of the changes that were made during the past 80 years. These changes have maintained for the most part the magnificent routing and greens designed by Travis. 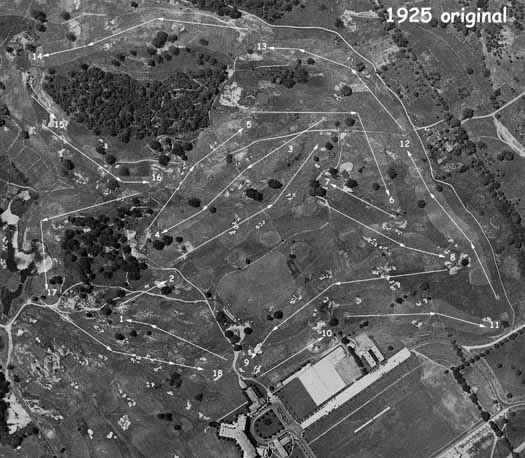 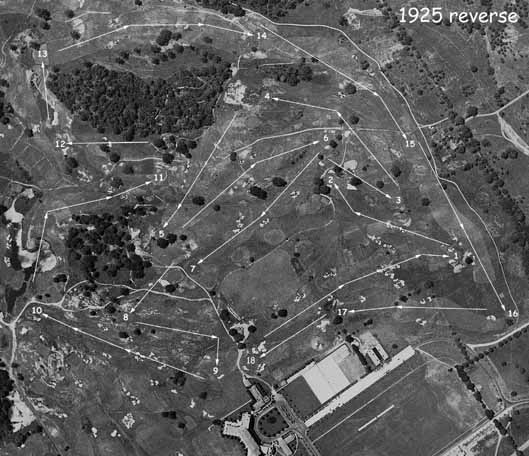 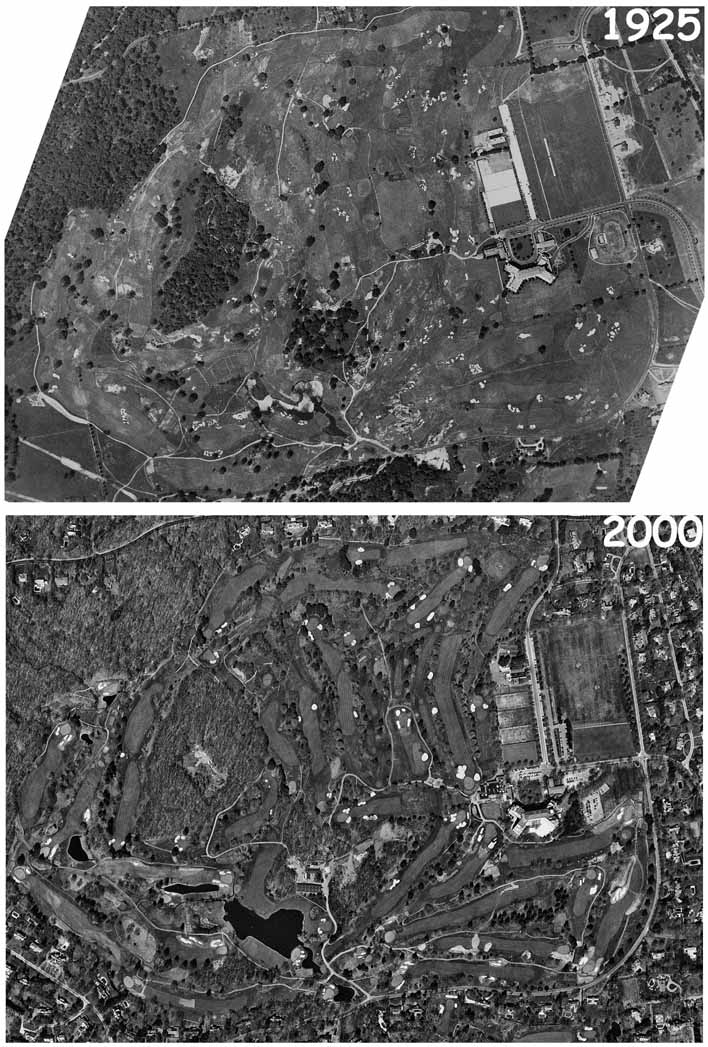 Evolution of the West Course

Aerial photographs from 1925 and 1940 reveal that the only significant changes in routing were made during that time. By straightening the original, downhill, short par 4 first hole, the mid length par 3 second hole was removed (3). A new par 3 of similar yardage was constructed between the original fifth and sixth holes (4). This change also resulted in some straightening of the long par 4 sixth hole (5). The original fourth and twelfth holes were similar in that the tee shot was played to a plateau, an advancement shot was played to a valley and the approach shot was played uphill to the green. By 1940 the twelfth hole was shortened to permit the tee shot to travel directly to the valley. 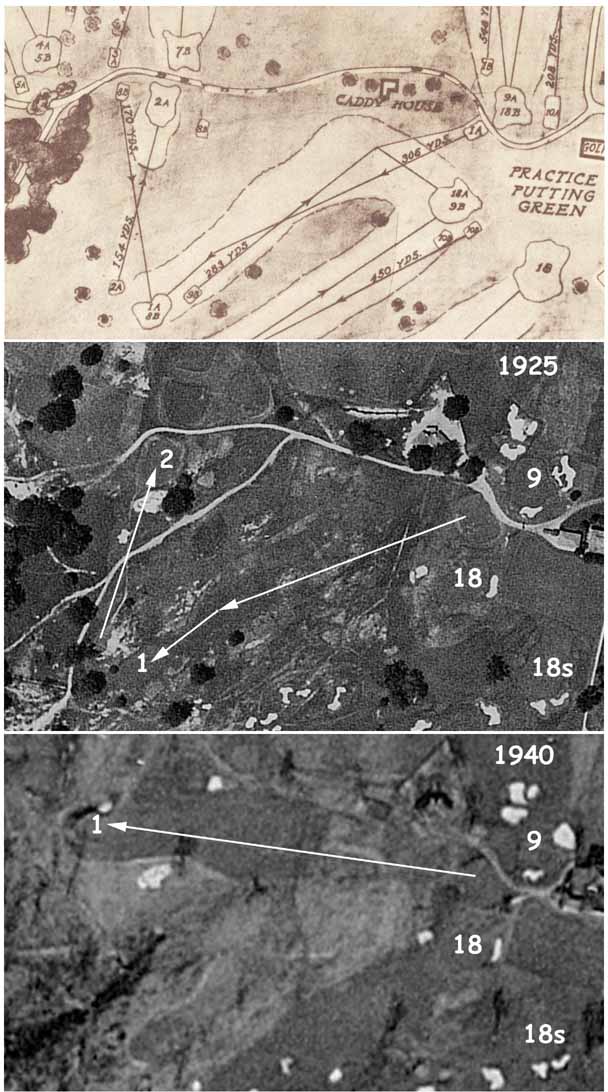 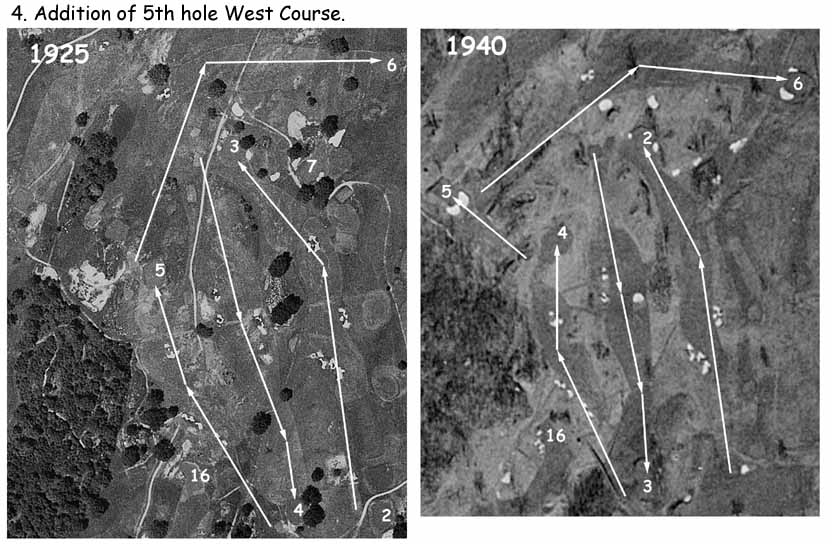 Alterations in Sand Bunkers and Addition of Trees

The original design incorporated many fairway bunkers strategically placed in clusters with exotic shapes. In addition, greenside bunkers were absent or scarce on many holes (e.g. 6, 11, 12, 14, 17) probably permitting bump and run recovery shots around these greens. By 1940, the exotic shapes were gone either by redesign or for ease of maintenance. Most fairway bunkers remained at this time but notably some greenside bunkers were added that changed the nature of play. Finally in later times fairway bunkers were removed and trees were planted limiting the lines of play. These points are illustrated in the composite figures of the sixth hole (5) and the eighteenth hole (6) of the West Course. 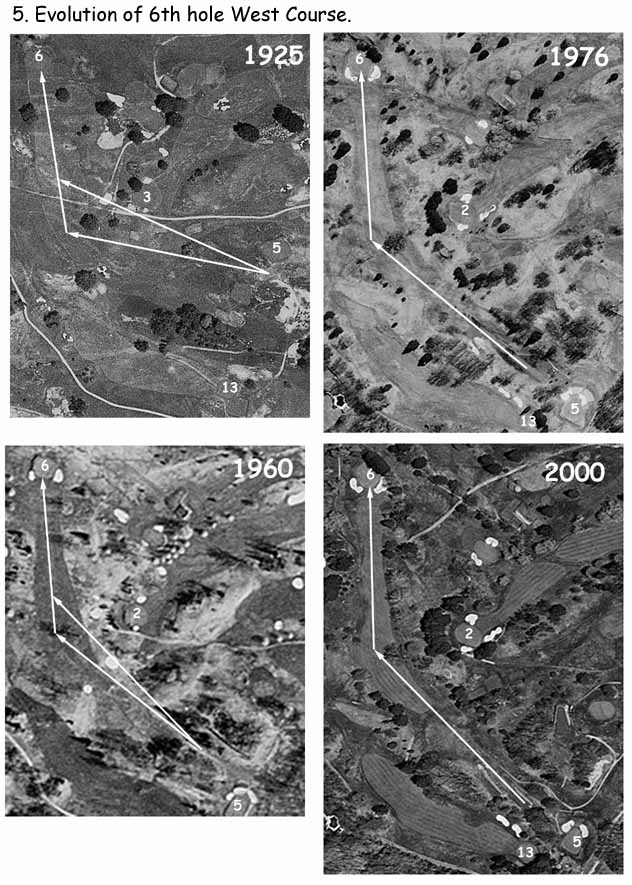 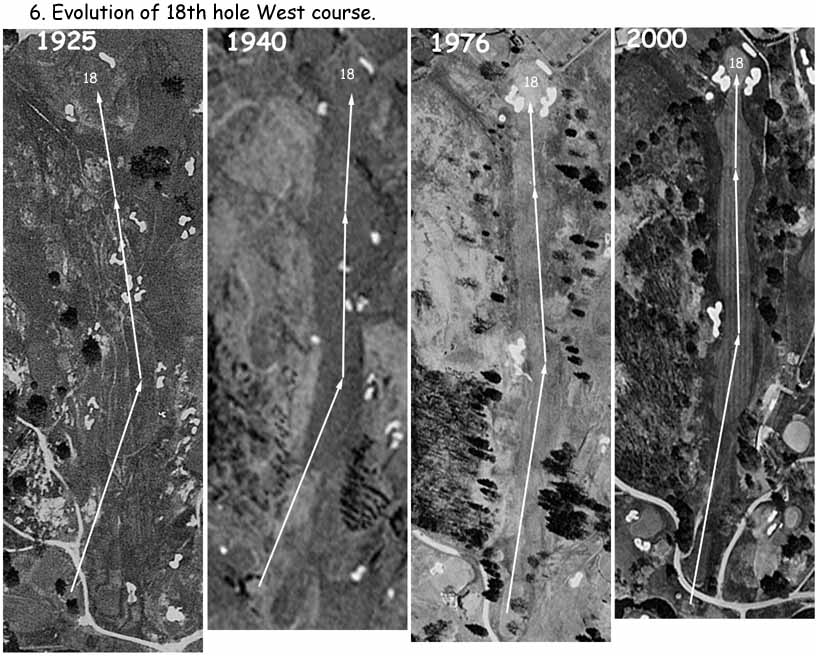 In 1925 the sixth hole was a long dogleg right with a large oak tree near the middle of the fairway and a bunker to its right on the short route to the green. In 1925, there were no greenside bunkers. By 1940, greenside bunkers were added. The addition of the new par 3 fifth hole resulted in a new tee for the sixth hole which lessened the angle of the dogleg. These changes remained through 1960. By 1976, fairway bunkers were gone and there were more trees lining the right side of the fairway. The tree-lined fairway defined the line of play for the average golfer that was to the left of the large oak tree. These features are in place today and only the longest players can carry the trees and rough to the right of the large oak tree.

In 1925 the tee for the eighteenth hole was on a high small mound just to the right of the 17th green. There were clusters of bunkers that offered optional lines of play depending on the player’s ability. By 1940 some fairway bunkers were removed and all were simplified making maintenance easier while maintaining the original design. By 1976 all but one fairway bunker had been removed and two greenside bunkers were added changing substantially the approach to the green. These features remain today.

The South Course routing was not changed for the first 75 years. However it did evolve in much the same way as the West Course with the removal and simplification of sand bunkers and the addition of trees. The 13th hole reflects these changes (7). In 1925, there was only one tree on the hole, a large oak 100 yards on the right side of the fairway. There were three clusters of bunkers approximately 12 in all on the left side of the fairway between the fairway and the water. This design was more likely protective than penal for two reasons. First the visual statement of two hazards (water and sand) on the left was directing the line of play to the right. Second, the bunkers would catch low running hooks preventing the ball from being lost in the water hazard. In the initial design the opening to the green was extremely wide permitting a reasonable recovery shot from the bunkers. However, the bunkers were removed by 1940. 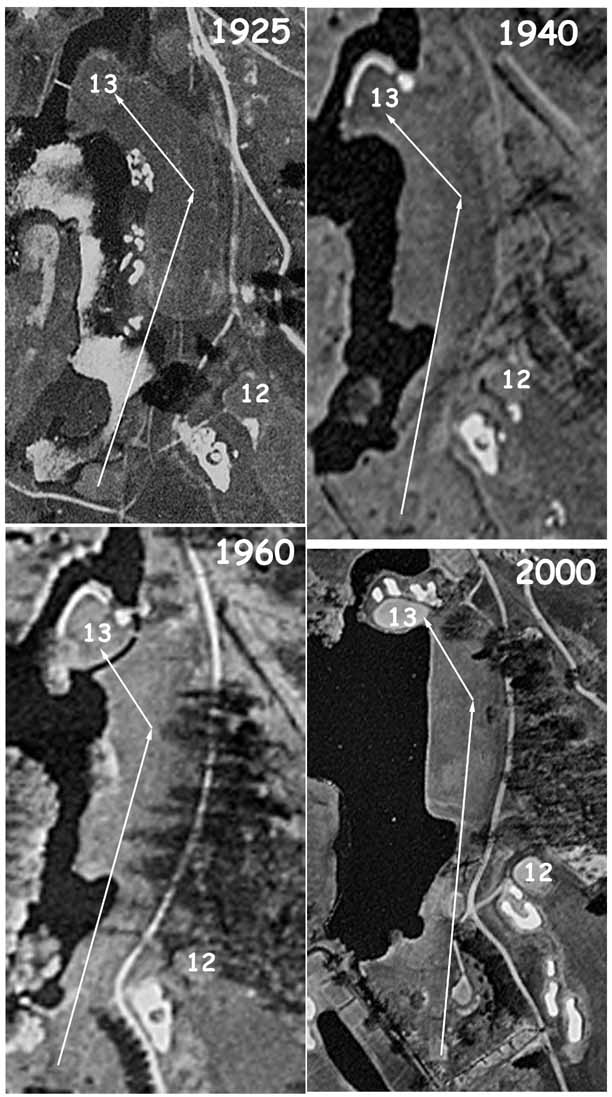 The line of willows that replaced the bunkers was evident by 1960; these trees made the hole much more difficult because they blocked the approach to the green from the left side of the fairway. During the 1950s, a channel was excavated in front of the green, creating an island green. When the lake was enlarged, the channel was removed; this is evident in the 1986 aerial photograph. By 2000 the trees were removed restoring access to the green from all positions on the fairway.