A golf course architect is not just a service provider. The service an architect provides should grow out of their philosophy and advocacy for particular ways they feel the game should be played. So, while every architect can provide design services, a particular club may not benefit from every architect’s services. It is important the architect test their compatibility with those whom are in charge of the club, and with the particular style of architecture of the course.

In recent history it seems these two statements have been difficult to reconcile together into a suitable mandate for future improvements to the course. In the case of Augusta National there is a wealth of information about what was envisioned by Mr. Jones and Alistar MacKenzie, including Mr. Jones feeling that the course should provide a game that is more enjoyable for the people who support it, is wide open to accommodate the average player providing alternative routes to avoid trouble while rewarding players who can make the carries over bunkers to gain a better view, angle of approach, or added distance from the sloping fairways. Testing the membership by soliciting their reactions to a hole-by-hole analysis of what it would take to modify the present course in order to more closely meet the goals and concepts of the original designers would be a good test toward determining whether the relationship will be compatible.

A good start to determine compatibility is the opening hole. From early pictures it appears a player could place the tee shot down the right side of the fairway to have a good angle to approach the green, particularly when the pin is anywhere along the left side of the green. That is not true today because of the trees that have crowded into the right edge of the hole. It even appears that the original fairway may have encircled the bunker. Mr. Jones comments in his book “Golf is My Game” points out the advantages in the variety of strategies that are present when there was fairway beyond and right of the fairway bunker.Reinstating the original tee location would be necessary as well.

Hole 5 is another good example where the more dangerous but advantageous play off the tee was down the left side where 2 bunkers are positioned with fairway beyond and left of the bunkers. Today, the fairway is now rough and there is really only one route to play. Today most bunker carries are impossible for members because bunkers have been repositioned so far from the tees and tees have been pushed farther from the bunkers. 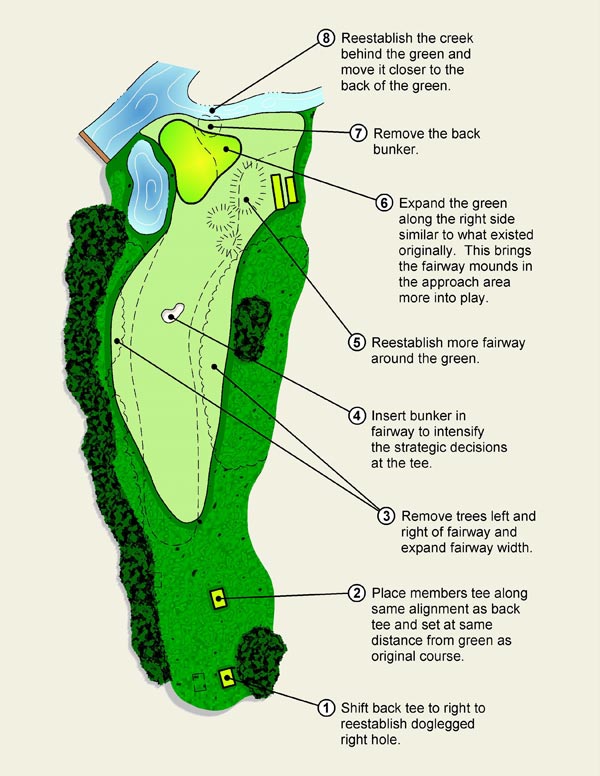 Also some interesting fairway bunkers that challenge the average club member have been eliminated. These bunkers should be considered for reinstatement like the original fairway bunkers on holes 2, 14, and 18. Some present day fairway bunkers appear to be close to their original location, like on hole 8, but the tees that brought them into the strategy of play for the average player have been eliminated. With a movement back to the original bunker locations and a reinstatement of the original tees it appears the course could be made to play about 6,700 yards again which would be ideal for today’s average club member and would return the strategy to the teeing game.

There were some interesting green shapes that have been lost and as a consequence it appears some very interesting pin positions were lost as well. As Mr. Jones has emphasized the course must provide its sternest test at the greens by “tighten it up by increasing the difficulty of the play around the hole.” Some interesting greens in the original design were holes 4, 6, 7, 9, and 18. 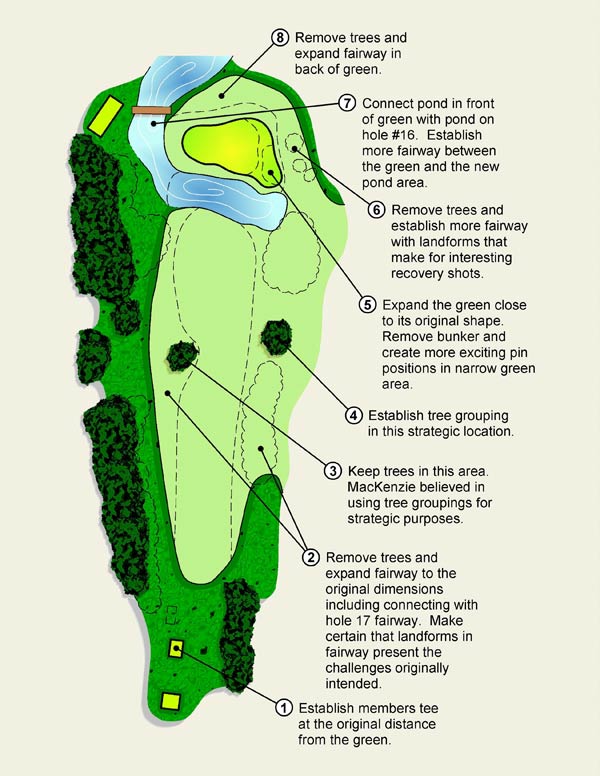 If the reaction of the club were favorable to these suggestions it would be time to press the most important idea of the master plan work for a course of such stature: the idea that the ground on which the game is played is owned by men, the design of that ground is owned by mankind. No one living person has the need to unilaterally control its evolution; rather a collection of people whose outlook closely matches that of the original designers should then be entrusted with guiding the club along a different path. Such persons may include an architect that collaborated on a biography of MacKenzie, and a player/architect that has won the Masters and by all appearances seems to represent the spirit of Mr. Jones.

In this way a committee of persons whose design services is most compatible with the original course design can best help the club make the need to keep the course current tie in with the integrity and shot values of the golf course as envisioned by Mr. Jones and Alistar MacKenzie.