Taylor, Jeff – Anatomy of a Rebuild

Taylor, Jeff – Anatomy of a Rebuild

Anatomy of a Rebuild
By Jeff Taylor & Louis Kiang

Opened/Built in 1964, Crofton Country Club is an Edmund Ault design located in Crofton, Maryland. Although Ault designs can be found throughout the country, the majority of his work is found in the Mid Atlantic region from where he based his operations. Like many of his designs from that period, Crofton is long and strong. The course measures 7175 yards from the tips and carries a course rating of 74.1 and slopes at 131.Crofton has hosted its share of local and regional events including the Maryland Open (3 times), a U.S. Open qualifier and a US Amateur Qualifier.

“Freeway” could be used to best describe the major design characteristic of the course.Hazards are generally placed on the sides of the golf hole.All fairway bunkers sit to the side of the fairway with only one golf hole allowing the option to drive to the outside of any fairway bunker and still reach the fairway (#15). All non-parthree green complexes savethe sixthallow a run up approach. This was a requirement back in 1964 when wooden drivers and balata balls were the tools of choice. Imagine trying to fly shots into the sevenpar fours over 400 yards, two of which exceed 460. Modern technology has tamed this beast for the better player but the course still provides a stern test for the average golfer.

Since 1998, Crofton Country Club has been managed by Century Golf Partners Inc.Like many other older clubs in the area, the facilities were in need of upgrades and the small/below capacity membership lacked the financial resources to implement the necessary improvements.Century proposed a revenue sharing plan that allowed members of the club to control a portion of monthly revenues for improvement projects. An elected Board of Governors was formed along with a Capital Fund Committee that received, fleshed out, sought bids, and made recommendations for renovation/improvement projects. The system has worked very well and resulted in projects like the installation of a short game practice facility, the rebuild of the 17th green, conversion of tee boxes from Rye grass to Zoysia grass, and the wrapping of all bunkers with Zoysia grass.

The sixth at Crofton is the number 1 handicap hole on the golf course. It is 525-yard dogleg right parfive with a water hazard in front of the green as its defining feature. The pond begins 115 yards from the green on the left side and ends just 25 feet short of the green. Over the past 40+ years since the course was built, the green had settled and various drainage pipes in and around the green complex had eroded resulting in a green that would not drain and a deteriorating drainage system that ultimately was going to fail completely within the next several years. We concluded that “spot” repair of the green complex/pond bulkhead would be ineffective and made the decision to redesign and rebuild the entire green complex including the pond bulkhead structure. 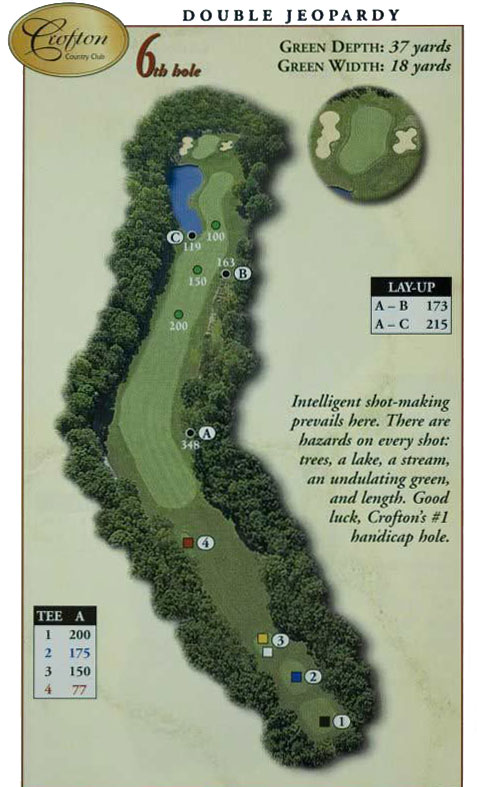 The club had formed an association with a local and reputable architecture and construction firm during the first year of our management / member partnership. They designed and built Crofton’s short game facility and designed and implemented the reconstruction of the 13th and 17th greens. After walking the property and looking at the sixthhole in detail, they delivered a renovation proposal that split the project intotwo parts. PartOne dealt with the green complex and the pond bulkhead.PartTwo addressed the first half of the hole. Trees at the corner of the dogleg had grown so much that a lay up tee shot was required, thus forcing all second shot lay-ups to the 125 yard area. The volume of shots played from this area not only made it difficult to maintain turf but also restricted the number of ways to play the hole for the majority of golfers.

Our Board decided to split the project into two parts for the purpose of recommendation and approval. The philosophy behind this decision was simple; we didn’t think it would be approved if proposed as a single project. Thus, we focused on the more critical work on the green complex and pond bulkhead. 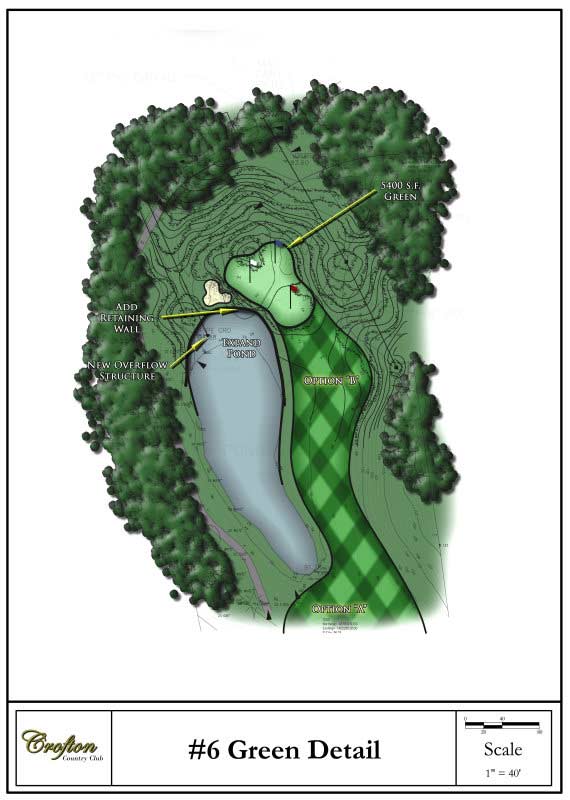 The pond overflow system dumps into a stream behind the sixth green.An engineering firm was brought in to consult on the design and the cost of renovating the overflow structure.Their work was added to the architectural plan to deliver a final cost projection.

The Capital Fund Committee presented the project to the Board.The construction company created a PowerPoint presentation that documented and provided details on why the project was necessary, what could be done to improve the green complex, the benefit to golfing members, and finally the detail of work and cost.

The meeting took 90 minutes andincluded positive dialogue between members, management and the consultant. The presentation and proposal was very well received by the Board.Two months after the presentation, the motion passed with all butone of the Board members approving the $166,000 project.

The following images document the progression of the construction project.Permitting delays and changes pushed the start date from late July into November.County Government concerns for runoff forced us to move the green further away from the pond. In order to maintain the completion date, we were forced to sod the green instead of growing it in.Performing some of the work with the Club’s maintenance staff freed up some labor dollars for the additional sod. 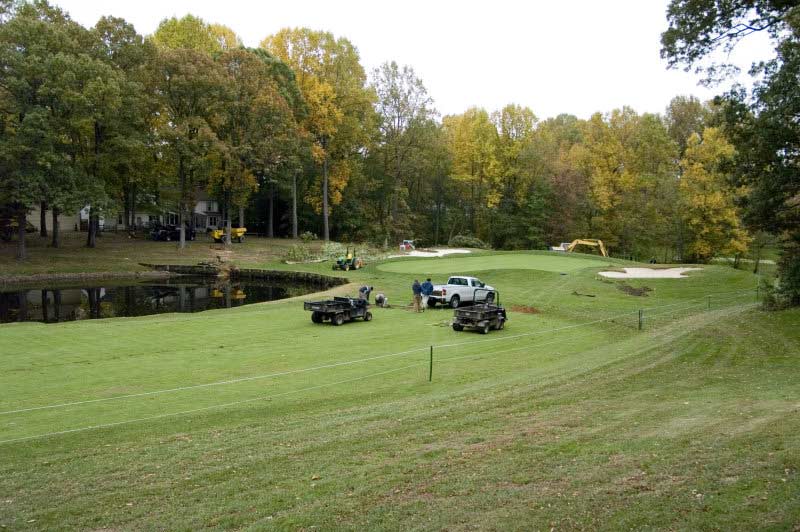 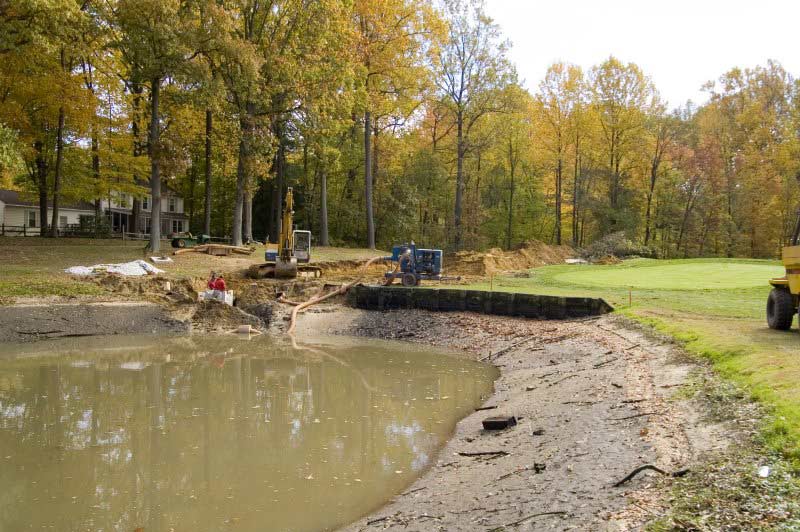 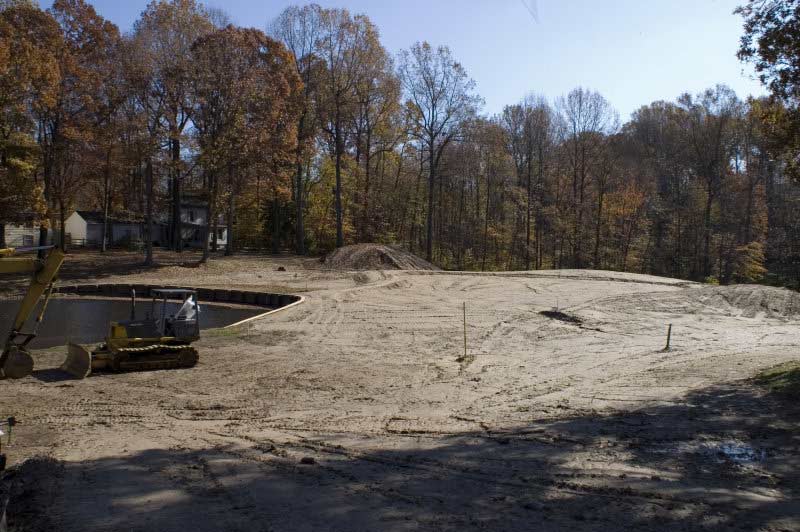 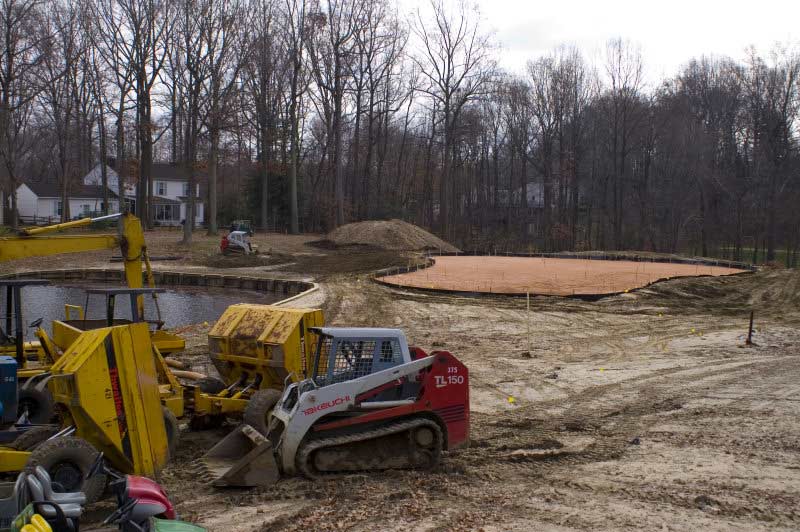 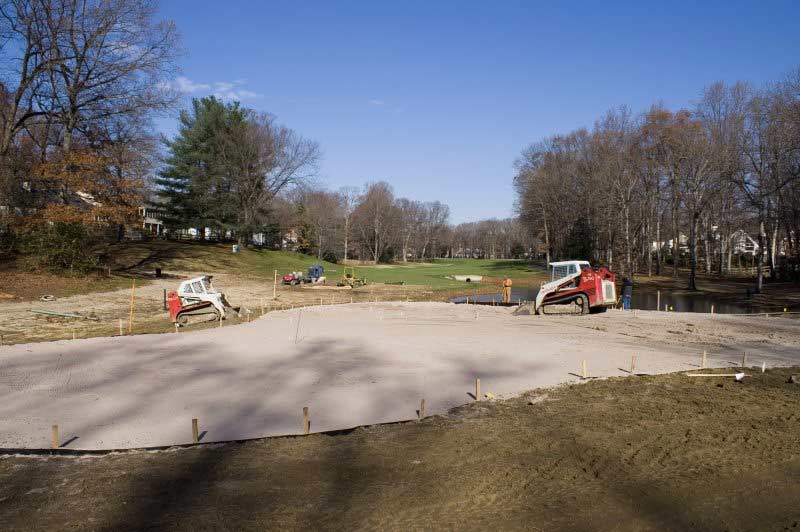 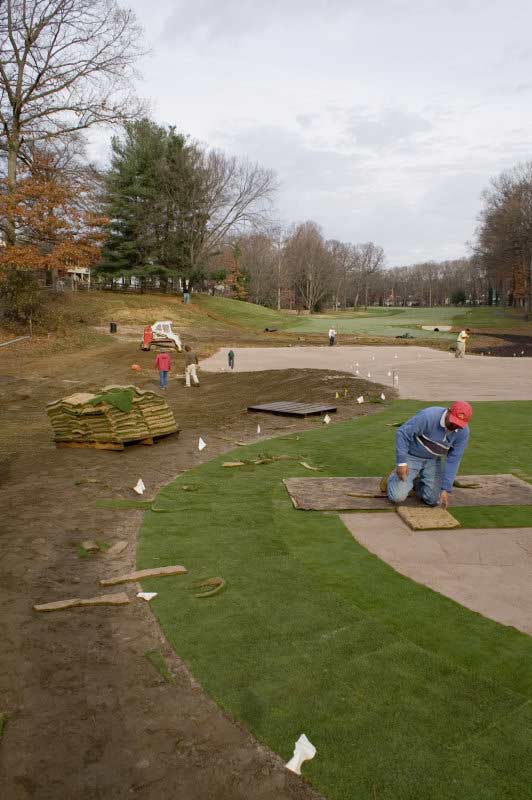 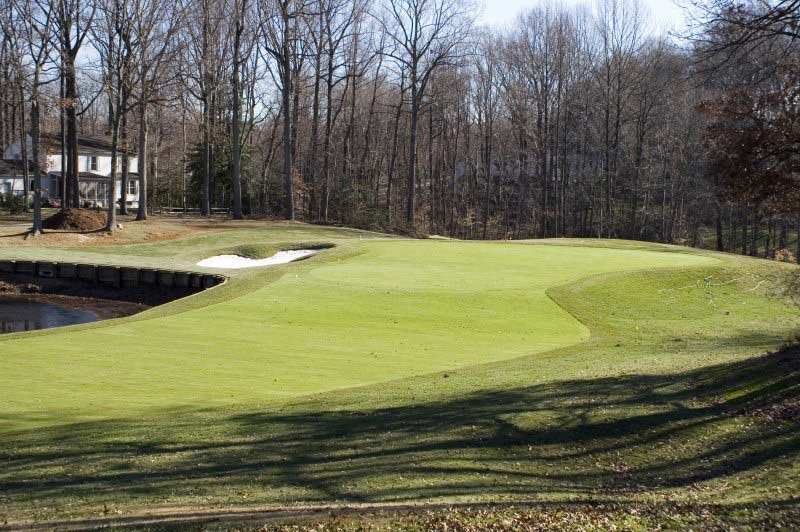 Work was completed aftersix weeks of construction that saw more thaneight inches of rain. At least 10 days were lost because of wet conditions. Members can now enjoy a new sixth green that is elevated above the pond that it fronts, and has more pin positions and more interesting short game possibilities. So far, member feedback on the design and construction has been positive. We will see if that changes come May 1, 2007 when the hole is opened for play.