Valhalla Golf Club was born from the dream of Dwight Gahm to build a golf club in Louisville with a course worthy to host a major championship. Major championship golf had eluded Kentucky since the 1952 PGA Championship at Big Spring. With the aid of his three sons, he acquired a 486 acre property east of the city. Jack Nicklaus was retained as the architect, and the course opened in 1986 as a golf only club. It received national acclaim upon opening, and was awarded the 1996 PGA Championship. Soon after this, Jim Awtrey and Dwight Gahm worked to culminate a unique partnership. The PGA acquired the golf club with the goal of having a facility in the central Midwest to host its events on a rotating basis. It spacious grounds and amphitheater settings allow for stadium type spectator viewing in the spirit of the TPC Sawgrass. Valhalla went on to host the 2000 PGA Championship, the 2004 & 2011 Senior PGA Championships, and the 2002 Club Professional Championship. In 2008, the Ryder Cup matches were held at Valhalla, and the American team routed the European through Paul Azinger’s “pod” system. Tiger Woods, Tom Watson, Hale Irwin, and Mark Brooks have all triumphed in the Norse Golf Heaven. The club is looking forward to hosting the PGA Championship again in 2014, and will become the 39th course to have hosted 3 or more of the men’s major championships.

The course itself features two distinct nines that were routed along Floyd’s Fork. The front nine is more open, and the back nine winds through the woods.  The course has 62 well placed bunkers, and the greens, tees, and fairways are a combination of T1 and Penway bent grass strains. In 2011, significant changes were made to several greens as well as extensive changes to the 6th and 11th holes.  The course re-opened in the fall of 2012. For the most part, trees only come into play on holes 1, 12 and 17. The ground game can certainly be put into effect on all but a few holes, and it is actually easier to walk the course than to ride a cart. The strength of the course lies with several strong long par fours and two excellent, short two shotters. The four par fives offer diversity and somewhat unique challenges as well.  The conditioning is excellent, and the setting encompasses the majestic beauty of the Bluegrass State.  However, the real strength of Valhalla Golf Club lies in its Southern hospitality. Keith Reese serves as the General Manager, Roger Meier as the Head Greenskeeper, and Chris Hamburger as the Head Professional. The staff and membership are outstanding, helpful, and there is no evidence of elitism.  The quality of golf is excellent, but the day you spend here exceeds the golf!

Hole #1, 450 yards “Cut the Corner” Par 4
A dogleg left with a green that tilts from left to right. It is well bunkered. The tee shot favors a draw with a fade being preferred on the second. The bombers will take it over the trees on the left. This is the hole that Boo Weekly rode his “horse” to victory in the 2008 Ryder Cup after his opening tee shot.

Hole # 2, 530 yards “The Ridge” Par 5
Another dogleg left. This is an excellent birdie opportunity. Reachable in two by long hitters, short hitters should lay up to the far right side of the fairway. There is actually more room to the left of the fairway than it seems, but it has some of thickest bluegrass rough on the course.

Hole #3, 210 yards “Floyd’s Fork” Par 3
A well defended par three with a two level green. A well struck iron shot will often feed to a back hole location.  This hole has “eden” characteristics with the large bunker on the right and a smaller bunker on the left. The green slopes from back to front as well. 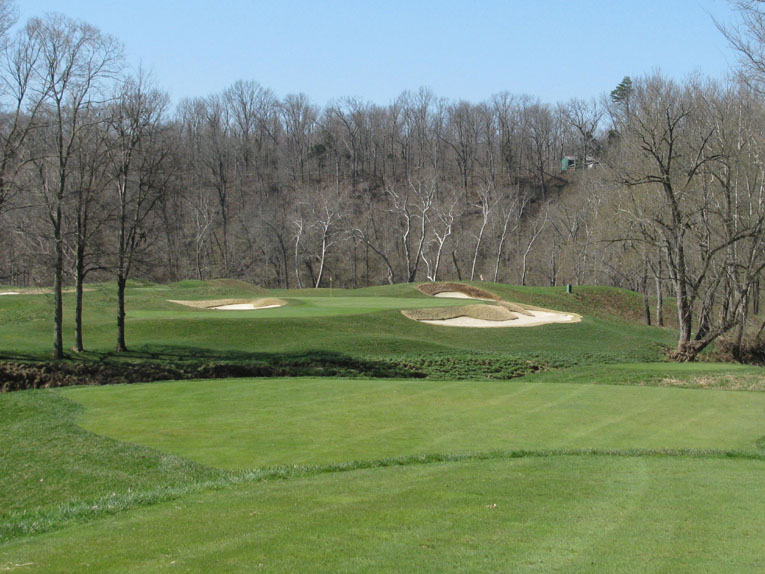 A view of the par 3 third

Hole #4, 375 yards “Short ‘N Sweet” Par 4
A short par 4. Most will hit less than driver to a fairway that sweeps to the left. The green is challenging , and does not slope as much from back to front as it seems.  Birdies are not as easy to come by as the length would indicate. 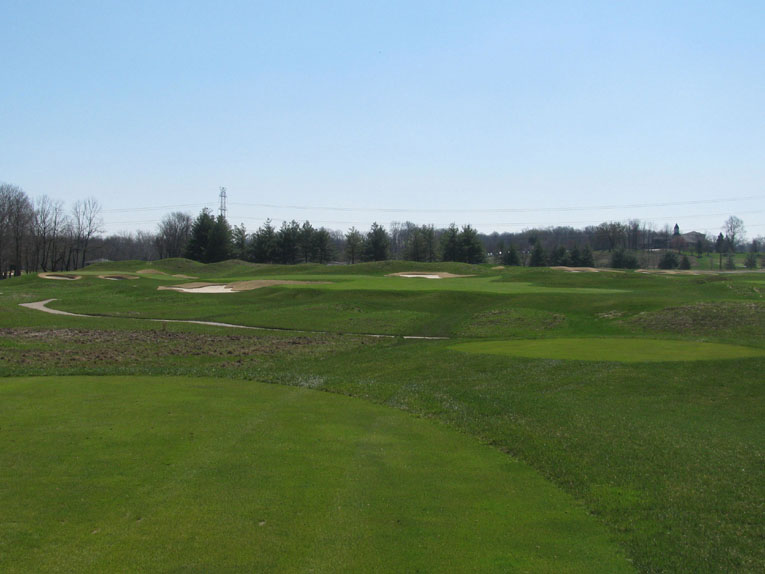 Hole #5, 460 yards “Fade Away” Par 4
A solid, medium length par 4 that bends to the right. Par is a good goal and a good score here. The drive needs to be fitted between three bunkers on the left and one large bunker on the right.

Hole #6, 495 yards “The Bear” Par 4
A demanding par with a forced layup due to Floyd’s Fork that bisects the hole at an angle . The hole, doglegs right quite hard, but the play is to the end of the fairway leaving 205-215 yards in. I originally did not think I would like this hole, but the strategy is somewhat similar to the 8th at Pebble Beach. The second shot is very demanding as it calls for a long draw shot. This is the hardest hole on the course, but if one avoids being intimidated by the creek a “5, option 4” is attainable. 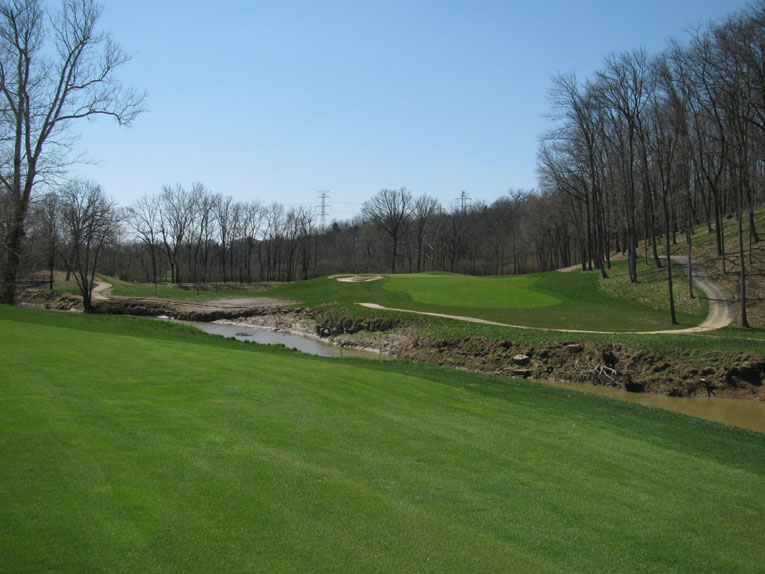 Hole #7, 600 yards “Players Pick” Par 5
This interesting par 5 has optional lines of play. There is an island fairway on the left and the right side of the hole plays as a long cape hole bending to the left. There is water all the way up to the edge of the green. Most pros will take on the island fairway and go for the green in two. It is a birdie opportunity even for those playing it as a three shot hole. I think there are some aspects of the “Channel” hole here. 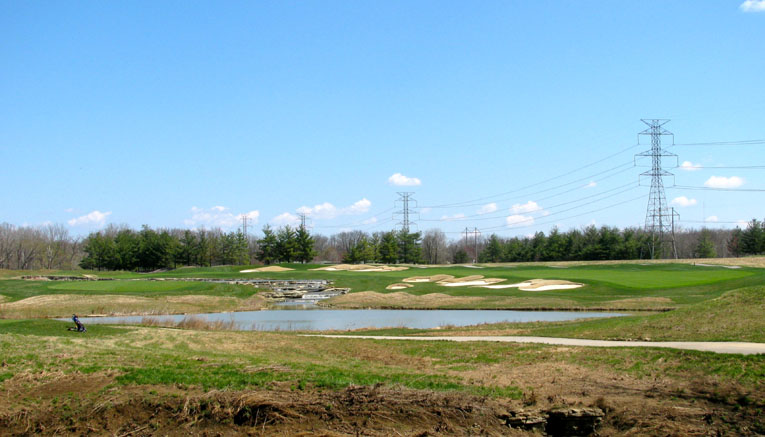 View of the seventh hole from the back tee. Note the alternate fairway left and the green to the far left of the photograph

Hole #9, 415 yards “The Rise” Par 4
An uphill par 4 that is well bunkered in the fairway and has a three tiered green.  It does not play quite as much uphill as it seems to. A good view of the clubhouse behind the green awaits. 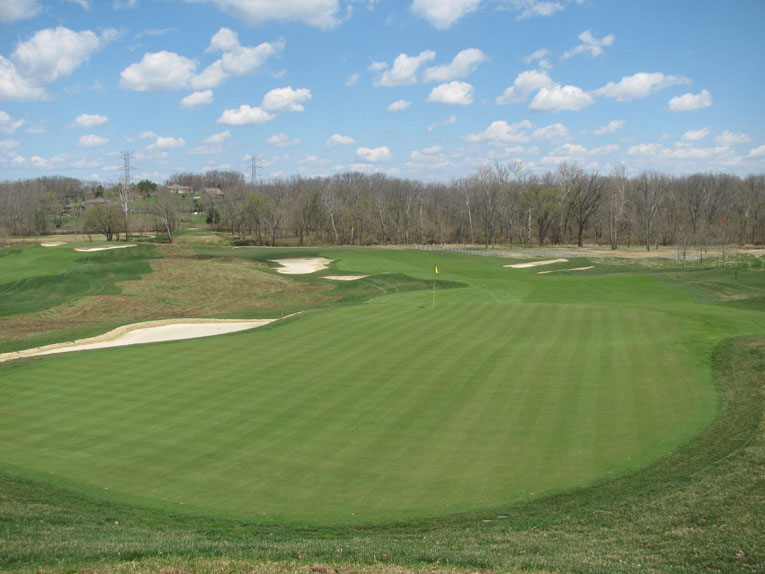 The multi tiered ninth green viewed from above

Hole #10, 595 yards “Turns” Par 5
Perhaps the easiest hole on the course, it a snaking hole that starts off to the right, bends left and then right again. Long hitters that go for the green should try and feed the ball from the left front of the green. There is bunker right center that is quite menacing. The green is difficult to hold as it slopes away from the player with the overall lay of the land. 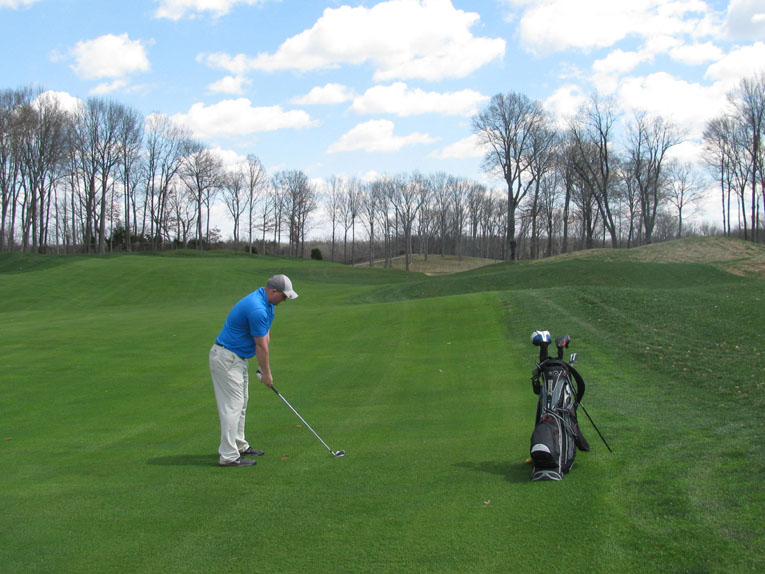 GCA’s Marc Huther goes for green in two. A mostly blind shot can be fired at the left edge of the green and use the contours to feed the ball toward the middle avoiding the fronting bunker

Hole #11, 210 yards “On the Edge” Par 3
My favorite par three on the course has a green that is oriented like a “redan” hole. A large bunker is left of the hole.  A visually intimidating hole when the pin is back left, but a well struck draw shot will curl around to the pin if the front right of the green is hit. This hole is completely different from when the course was first designed. 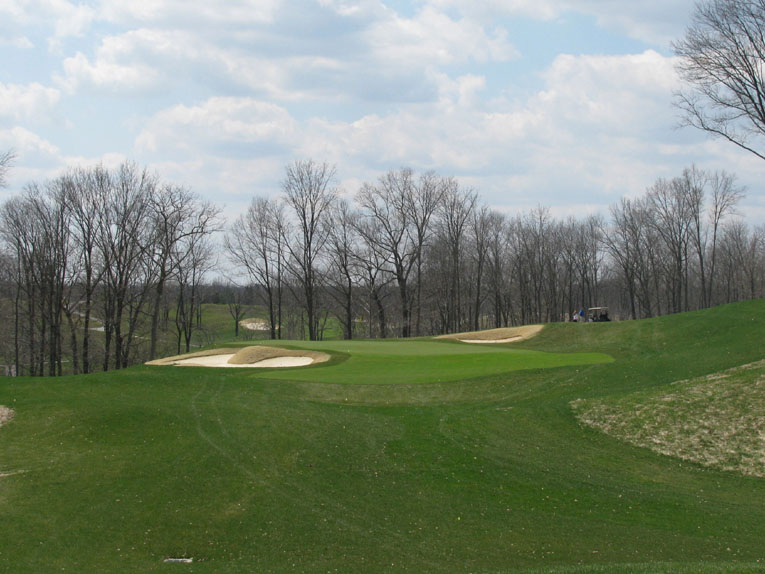 Hole #12, 470 yards “Odin Revenge” Par 4
Another excellent par four hole. Similar to #6 in that the fairway runs out at 150 yards, and the hole drops severely downhill. The green is set on the other side of the valley. Most long hitters will hit less than driver. The left side of the fairway is the better option, as some branch clearing needs to be done on the right. This hole reminds my friend Marc of the 15th at Muirfield Village the way the fairway ends.

Hole #13, 355 yards “The Island” Par 4
This is the signature hole at Valhalla. While I personally could do without the waterfalls and manmade rock formations on six, thirteen, and eighteen it certainly appeals to my guests.  It is an excellent short par 4 without any of the decoration.  Hitting the fairway is imperative.  Most will take less than driver and leave a wedge shot into the island green. I try and hug the left side avoiding several bunkers along the way. There is a ridge in the middle of the green that I aim for regardless of where the pin is. If the shot is less than perfect it can skip to the back of the green where a watery grave is a possibility. At the 2008 Ryder Cup, the tees were moved up to tempt the players into trying to drive the green, but it was not attempted in the competition. 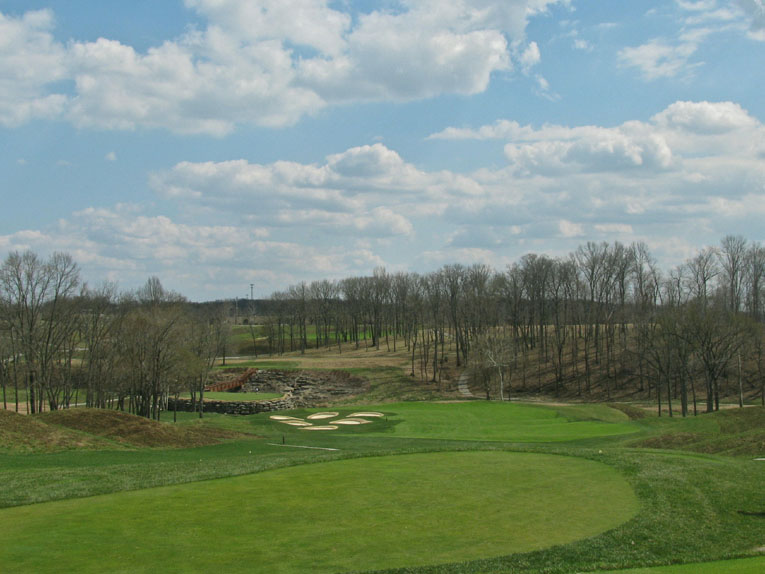 The thirteenth is an excellent finesse hole on a course that favors brute power.

Hole #14, 220 yards “Two Tears” Par 3
A medium length par 3, that again plays to a tilted green. There are two distinct tiers and a miss left leaves a tricky shot. Bunkers guard the front and back of the green.  One of the negatives about this course is that the par three holes, while technically excellent are relatively non-descript. They also play to similar lengths.

Hole #15, 435 yards “On The Rocks” Par 4
A good stretch of par fours starts here. Trees guard the left side of the fairway, while Floyd’s Fork guards the right. After hitting the fairway, one must negotiate a narrow opening between the creek on the right, and the bunker on the left. Par is a good score, but birdie is not out of the question.

Hole #16, 510 yards “Down The Stretch” Par 4
This will play as a half par hole for the pros. The tee shot is protected once again by Floyd’s Fork on the right. The green is a tabletop that has two pot bunkers guarding the left and middle. I would suspect a Sunday pin placement will be behind the bunker right center. A fall off to the right of the green will present options to the player going long right. Par here is a very good score.

Hole #17, 475 yards “No Mercy” Par 4
A tight drive must be negotiated between two field goal trees, and bunkering on both the left and right. The right fairway bunker is certainly in play, and care must be made not to drive over it into the heather. Another negative comment about Valhalla is that the heather could be thinner. It certainly causes play to be slower for the average player, but rarely is in play for the scratch golfer. The hole plays uphill all the way to what is perhaps my favorite green complex on the course.  The green is protected by a bunker short left and chipping areas all around.  A player who goes 4-4-4 on 15-17 should be quite pleased with himself.

Hole #18, 545 yards “Gahm Over” Par 5
The day closes with an intriguing five par. This tee shot plays severely downhill with a bunker guarding the left side, and Floyd’s Fork once again guarding the right. It is reachable in two for the long hitter.  The layup is actually quite tight with the creek bisecting two fairway areas. A green with a central plateau and two flanking lower tiers is guarded by a central bunker.  For the pros it offers the chance to make up one, possibly two shots at the close. 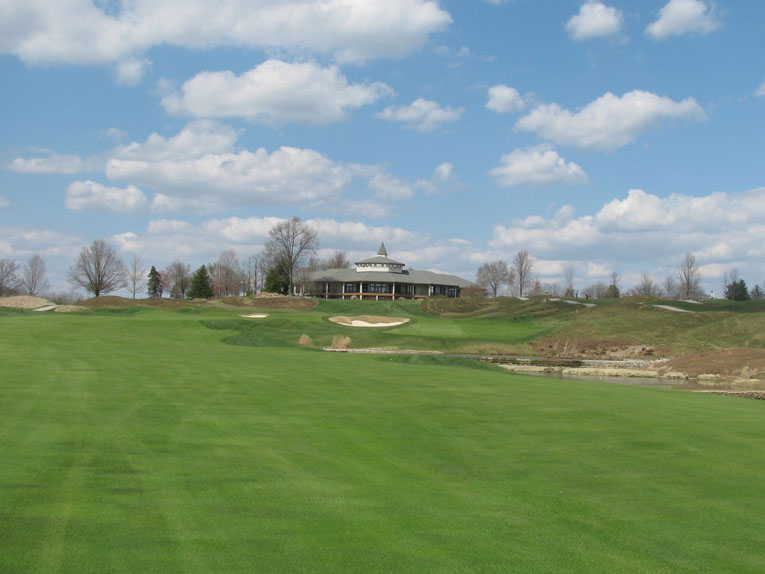 View of the clubhouse from the eighteenth fairway 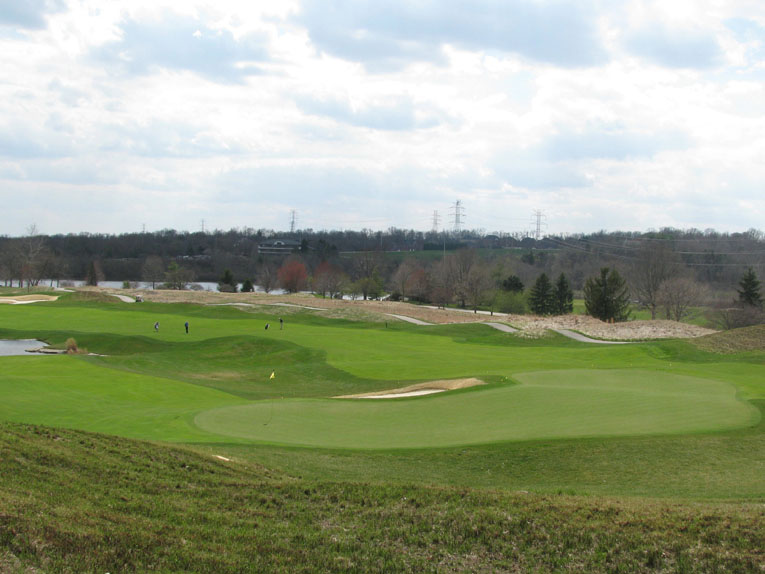 Great view of the challenges presented by the three levels of eighteen green and the fronting bunkerValhalla achieves its goal as a great test of golf while allowing for a terrific members course.  The conditioning is flawless, and I love the people who run it.  It certainly is one of the finest in the state, and I think an entertaining 2014 PGA Championship will ensue. For those with access, I would recommend giving it a play if you are within a couple hours. 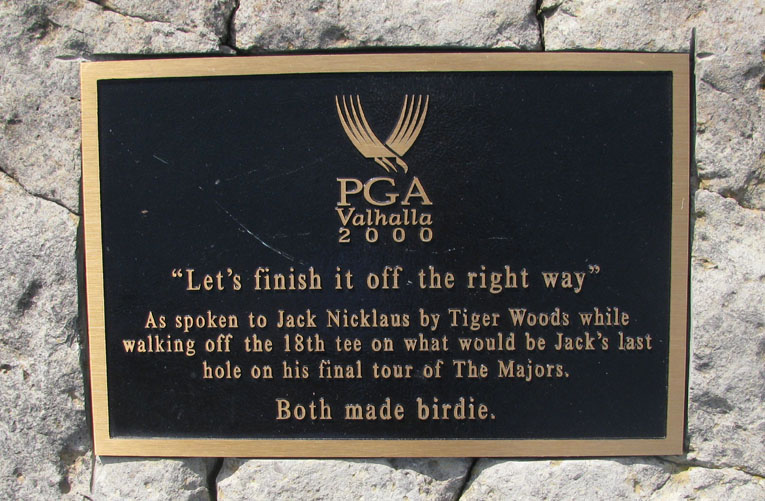