The Lone Star State’s Jewel Changes with the Times

Today’s River Oaks Country Club golf course illustrates two of the main themes in the evolution of course design in America. Donald Ross’s original layout of 1923 was a classical example of his strategic style of design, while Joe Finger’s redesign of the late 1960s combined modern engineering with elements of the penal style to stiffen the challenge. Finger’s respectful redesign essentially followed Ross’s routing, allowing today’s players to enjoy a fully challenging modern course that preserves many features of its original pedigree.

River Oaks began in the early 1920s as a gleam in land developer Colonel Tom Ball’s eye. It quickly became a key part of visionary Will Hogg’s dream of a residential park. Hogg, the son of a Texas governor and a progressive advocate of urban planning, put up his own money to build an elite community in Houston, a subdivision that would convince the city’s leaders of the wisdom of planned development. Today, Hogg’s dream lives on, and the River Oaks Country Club is a prominent social, civic and “family” institution, as embedded in the legend of Houston as the Galleria, the Astrodome, and the Johnson Space Center.

Both Ball and Hogg wanted to entice Houston’s wealthy oil men to the new development with the lovely Spanish clubhouse and fine golf course. Chartered on February 1, 1923, after Hogg bought out Ball’s interest, River Oaks became precisely the kind of magnet the developers had hoped for. In eight months, the club accomplished its original goal of enrolling 300 members. As the Hogg group developed the subdivision, they sold the country club to its membership in 1924.

For decades, River Oaks has benefited from its members’ “course beautification” efforts. With its dogwoods, azaleas and magnolias all abloom in the spring, River Oaks brings a touch of Augusta to Houston. The charming Spanish clubhouse, long since outgrown, has been replaced by an impressive Georgian Colonial building with modern locker rooms and pro shop. The 6868-yard golf course, though much changed from Ross’s original 6375-yard design, remains what it was at its inception: one of America’s finest private layouts. 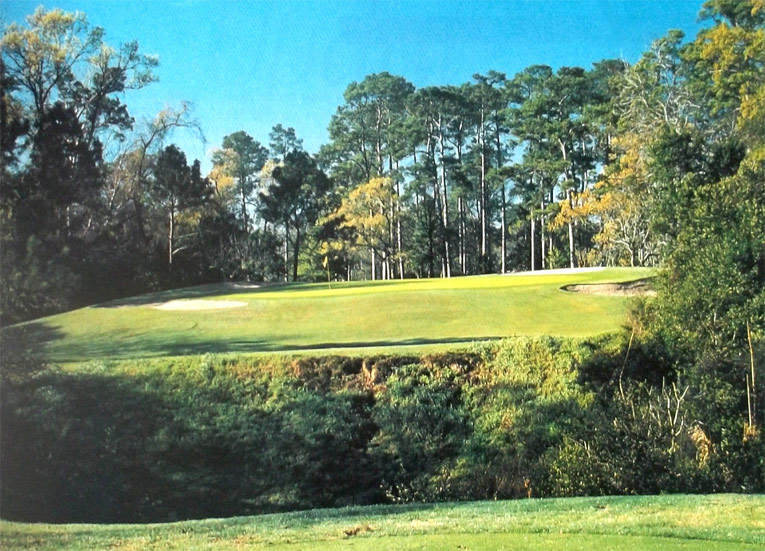 The par 3 sixth crosses a gulley and highlights the attractive property of the course.

The original design was fairly typical of the many “parkland”  courses Ross produced between world wars: tree-lined, many doglegged holes following the natural terrain, small greens and ample, but not overwhelming, use of bunkers. “You don’t see a straight line in nature,” Ross once wrote, and he avoided them in his designs, evidenced by the fact that only three of River Oaks’s original holes didn’t turn.

According to Ross’s strategic approach, a championship test examines every skill and every club in the bag in equal proportion: long and accurate tee shots, accurate iron play, precise handling of the short game and consistent putting. To ensure “honest” shot values, Ross balanced the severity of the problems he posed with the attainability of the objectives; for example, a very difficult tee shot, as on number 13, is followed by a less demanding approach; or an easy tee shot is followed by an approach to a difficult green.

Jack Burke Senior, the first golf pro at River Oaks, called the 11th hole, a 232-yard par-3, “The Pride of River Oaks.” With its straightforward, demanding tee shot, No. 11 is the quintessential Ross challenge.

Precise handling of the short game was essential, as Ross’s characteristic greens are exceedingly challenging. Inspired by the famed No. 14 at Royal Dornoch, Ross often elevated his greens slightly above the fairway, and the hilltop crowned green became his trademark. His greens were shaped like inverted saucers and sloped away to the sides and back, creating a much smaller target than seems immediately apparent. Ross often placed deceptive bunkers well forward of his greens as well, so that careless players could clear the bunker but still be short of the putting surface.

Swales, ridges and plateaus on the putting surface challenged players to execute the pitch-and-run shots and delicate chips. Jimmy Burke, son of Jack Burke, recalled that Bobby Jones “loved the greens here at River Oaks, like the old ninth hole, with its two plateaus at the back.  He’d play that hole–a drive and an 8-iron for many players–by hitting his big hook with a 7-iron and running his ball up to the plateau on the back left side of the green.”

When selecting Burke, a top teaching professional who nearly won the 1921 US and Canadian Opens, as their first golf pro, the club was guided by the principle that they wished to hire only the very best people in the game. Subsequent appointments included some of the preeminent names in American golf: Jimmy Demaret, Claude Harmon, Jackson Bradley and the current head professional, Dick Harmon.

Burke Sr. is patriarch of one of America’s noblest golfing families. Sons Eddie and Jimmy carried on his legacy of outstanding teaching, while Jackie Jr, went on to win the majors (Masters and PGA) that barely eluded his father.

Jack Burke’s extended family included many other of the games most notable figures. Though Jimmy Demaret arrived at River Oaks to caddie, he left Burke’s shop to embark on a remarkable career as teacher, player and golf’s goodwill ambassador. To Burke, a generous family man, Demaret was not only a promising young golfer, he was like another son. Burke helped launch Demaret  onto the high pedestal he occupies in American golf by introducing him on tour, getting him teaching jobs and involving him in exhibitions. Similarly, by employing his cousin Dave Marr, Burke helped hoist another star of American golf, his nephew Dave Marr, Jr., the PGA champion and talented golf analyst

Demaret , in turn, was like a brother to Jackie when he went off to seek his fortune on the tour. Together the younger Burke and Demaret won five  “majors” as competitors. When they established their Champions Golf Club in Houston, they were entitled to use that lofty name. In the area of human relations, Burke and Demaret  achieved their most important triumph in leading the movement to integrate the professional golf tour.

For a few months in 1943–44 Claude Harmon took over the pro shop at River Oaks when Jimmy Demaret, who succeeded Jack Burke on his death, was called into the Navy. The 1948 Masters champion and one of America’s finest teachers, Harmon worked his entire career to make his personal gains in status available to all his professional peers. Like the elder Burke, Harmon would eventually support the development of innumerable young pros, including both Jackie Burke and Dave Marr, Jr, by offering them positions as assistants at prestigious Winged Foot. According to Jackie Burke, what Walter Hagen accomplished for touring pros by entering American and British clubs and locker rooms, Harmon and Jackson Bradley (at River Oaks 1953-1966) accomplished for club pros.

In his own turn, Dave Marr, Jr, repaid Jack Burke’s and Claude Harmon’s generosity by supporting the aspirations of Claude’s son Dick when he was a candidate for the River Oaks job. Instructor to several touring pros, Dick has been a four-time winner of prestigious teacher of the year awards; and, as recipient of the Harvey Penick (1987, 1988) and Horton Smith (1988) awards, his name has been associated with the finest instructors and golf.

On the day the course opened, July 1, 1924, a local sports writer proclaimed River Oaks “by far the hardest course around these parts.” Its reputation grew so quickly that, two years later, the Texas Golf Association conducted its 20th annual tournament there and would return five more times. Jack Burke often hosted his peers at River Oaks, and over the decades members entertained, and were entertained by, most of the greatest players in American golf.  Bobby Jones and Walter Hagen conducted exhibitions here, while Gene Sarazen, Betty Jameson, Patty Berg, Arnold Palmer and Jack Nicklaus competed in  important tournaments or exhibitions. Babe Zaharias won her first golf title at River Oaks, the 1935 Texas Women’s Tournament. Jimmy Demaret  tuned up for his 1940 Masters victory by outplaying the entire Ryder Cup team in winning the prestigious Western Open here two months earlier. And in the 1946 Tournament of Champions –the event for which the Houston Golf Association was formed and which evolved into the PGA tour’s annual Houston Open – Byron Nelson, Ben Hogan and Sam Snead finished in exactly that order.

By the mid-1960s, when players were stronger, better trained and better equipped than those in the 1920s, the members considered modernizing and redesigning the golf course. Enter Joe Finger, collaborator on many courses with Demaret  and Nelson, and designer of several courses listed among America’s finest. Finger was charged not only with renewing the fairways and greens, but also with stretching the layout some 300-400 yards and  balancing both nines at par-36.

From 1968 to 1975, Joe Finger extended the course and improved its playability by repositioning existing tees,  building some new tee boxes, relocating fairway and greenside bunkers and adding 20 new bunkers. Finger also had to reshape and re-route several fairways, construct lakes, build some new greens and resurface all the existing ones. His redesigns of Nos.  3 and 4 created essentially new golf holes. 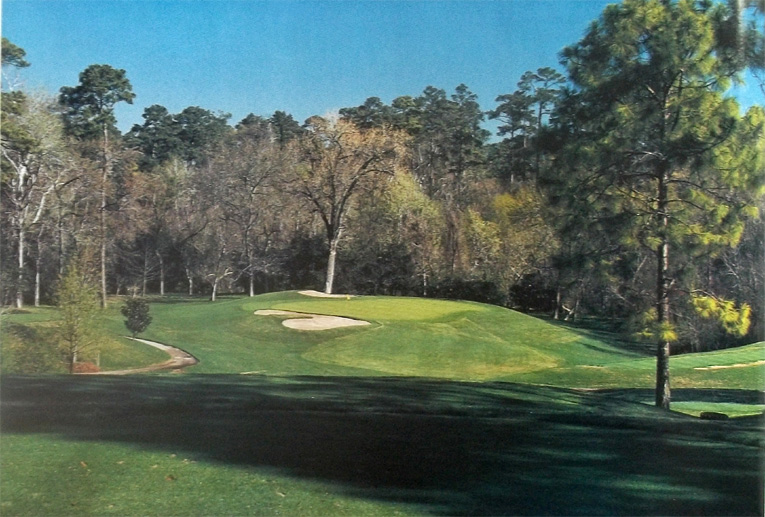 Finger reversed the direction of the third hole in part to accommodate the expansion of the fourth into a par 5.

Finger’s changes on Nos. 1 and 2 introduced the penal style at River Oaks. In rerouting the first fairway and turning it from a slight dogleg left into a rather sharp dogleg right,  Finger pushed the new green deep into the trees.  This allowed him to move the second tee back more than 100 yards,  thereby changing No. 2 – Ross’s shortest par 4 on the front side, a drive and a short pitch of 311 yards – into a much more formidable challenge.

Changes on No. 15, 182-yard par-3, illustrate other “penal” traits. Finger built a new tee and four sand traps on the right side and back of the green. In the front and left of the green, his pond introduces a severe penalty. These hazards surely toughen and beautify the hole, but they depart fundamentally from Ross’s strategy of using “natural” hazards (ponds on inland courses were too “artificial”) and offering players of slightly mis–hit shots the chance to recover and earn par with delicate greenside chips and pitches. Finger’s water hazard exacts double bogey or worse from the imprecise ball striker.

The evolution of the “modernized” River Oaks often resulted in enhanced playability, beauty and maintenance. For example, Ross’s predilection for leaving the natural terrain alone confronted many players with a severe problem on holes 13, 14 and 16. The rugged gullies on Nos. 13 and 16 were so deep, and the faces toward the green so steep, that when players were in them,  they could neither see the green nor play out with long enough irons to get home.

Finger’s major changes in 1975 were a return of the first hole to Ross’s original direction, but with a new green surrounded by five sand traps; complete redesign of the third hole; and transformation of the strong fourth into a par-5. To provide more length and to make room for the redesign of No. 4, Finger reversed the direction of No. 3 and dropped the new, 191-yard par-3 hole sharply down the hill toward the bayou. The changes on No. 3 enabled him to clear a path through which he could substantially lengthen No. 4’s fairway.

Today, the “new” River Oaks continues to rank proudly among the finest courses in this part of the country. When consideration is given to the course’s design, its playability, its traditions and its conditioning, few courses in Texas are its peers.