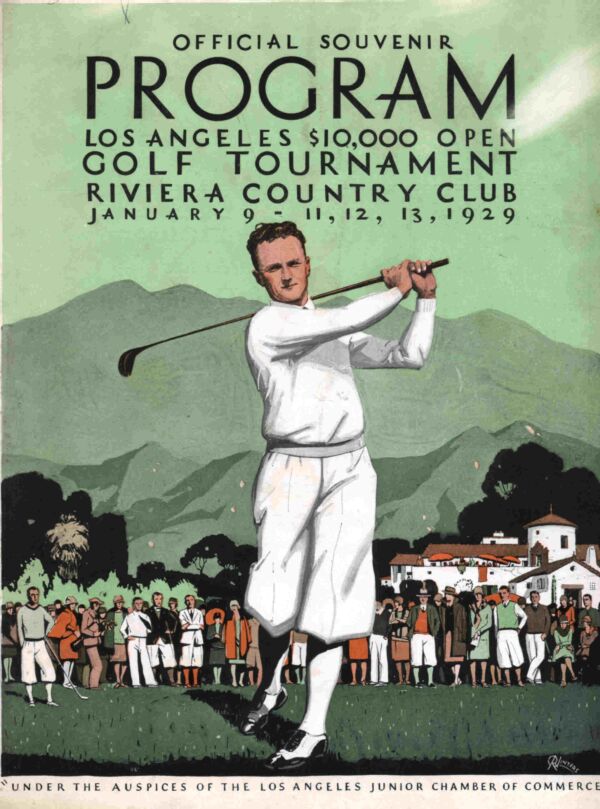 Every club historian interested in the architecture of their course hopes for articles such as Captain W.J. Brown’s ‘A Brief History of the Riviera Country Club.’ Though not lengthy or rich in details about the evolution of individual hole design strategies, Brown’s article explains more about Riviera than any other published article. Particularly the less glamorous details of construction: green sites raised, routings attempted and even the grassing choices.

An initial skimming of Brown’s article provides a fascinating account but the information doesn’t strike the reader as a seminal description of Riviera compared to architect George Thomas’s own writings. But after repeat readings and hearing Ben Crenshaw’s delighted surprise upon reading some of the subtle insights revealed by Brown, ‘A Brief History’ has become a little known treasure for anyone interested in Riviera’s design.

After reading Brown’s article, Crenshaw wrote an Introduction to The Riviera Country Club-A Definitive History, declaring Riviera to be the greatest ‘made’ course in the United States. He also wrote, ‘The course will always be a testament to the genius of George C. Thomas Jr. and his construction foreman, Billy Bell. These men organized a large labor force that literally transformed the floor of the Santa Monica Canyon into a completed art form so natural that nearly any stranger-golfer or non golfer-would be hard pressed to detect any evidence of the hand of man. Only a few architects were able to achieve this, but George Thomas was certainly one of the very best. His work remains a joy to play as well as to reflect upon.

‘Architecturally speaking, there simple are no features that ‘fight the land’ in the form of sharp, abrupt or angular movements…as well as achieving the natural and the artistic side of golf course construction, Riviera retains a fascination and serves as a supreme test for every golfer, placing it among an elite few. The golfer is confronted with eighteen separate problems which require that extremely rare balance of mental and physical, or skilled effort.’

In his Introduction, Crenshaw also cites the many difficult-to-believe construction accomplishments of Thomas, Bell and crew, insights picked up in Brown’s article:

‘The amazing feature to me was how all of this extremely heavy work was made to look completely natural! Consider for a moment these additional fill requirements for the other holes. No. 1 and No. 11, greens raised 10 feet. No. 3, 8 feet. No. 14, 12 feet. No. 4 – a wonder in itself – 16 feet. But, it all looks as though it has been there forever! It is all but impossible to try and find where artificial work ended or began. Furthermore, nearly every feature of the golf course possesses an imperceptible tilt toward the barranca or ocean to promote drainage. The subtle contouring of the greens, the drainage of the bold bunkers, and the little swales and valleys, all blend together in order to comply with nature.’

‘A Brief History of Riviera Country Club’ appeared in the 1929 Los Angeles Open program, the first of forty-one L.A. Opens hosted by Riviera. The program is a stunning collectible that captures the end of a unique era in Los Angeles history. The elaborate cover design, the hand-crafted fonts and even the dignified advertisements all reveal the intense civic pride that Angelenos had in this burgeoning city.

There are only a handful of known copies of the 1929 Los Angeles Open program in existence. Thanks to my friend Gil Hanse who recently purchased the program in auction and kindly bequeathed the copy to my small golf collectible archive, we can all enjoy Brown’s fine essay and other early Riviera photos from the program.

It seems only fitting that it appear online for the first time on June 24, 2002, seventy five years to the day that George Thomas and Billy Bell opened Riviera for play. 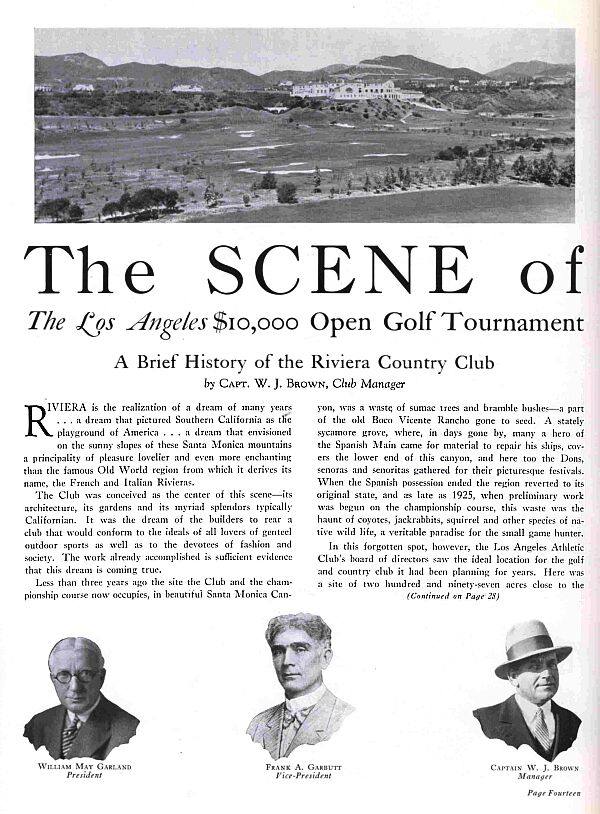 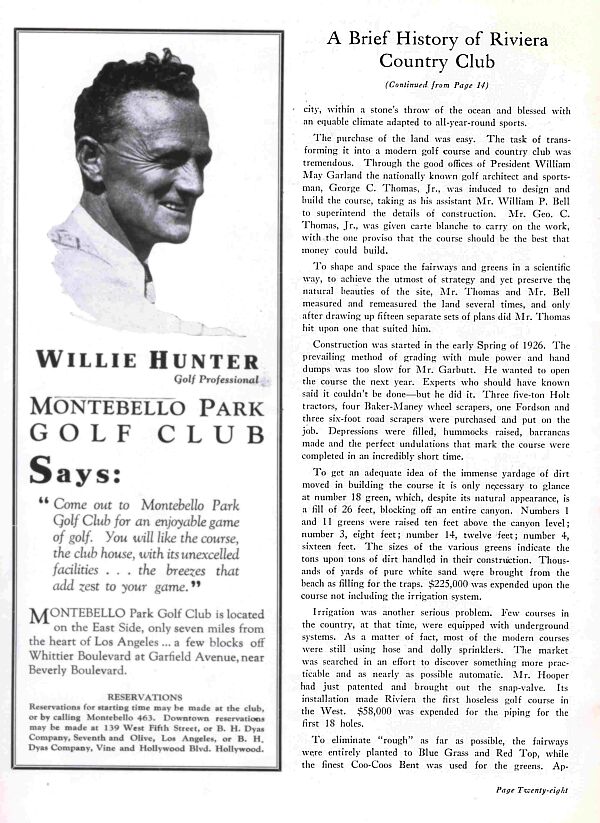 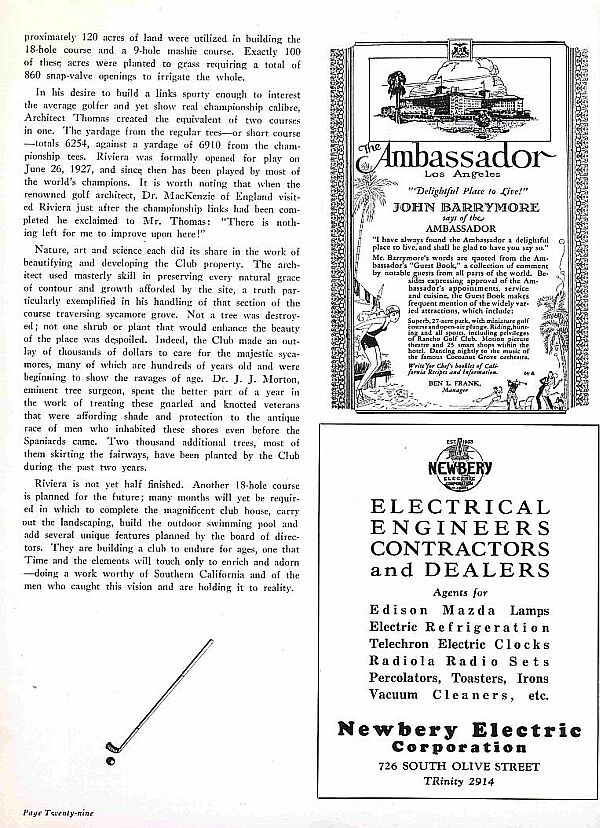 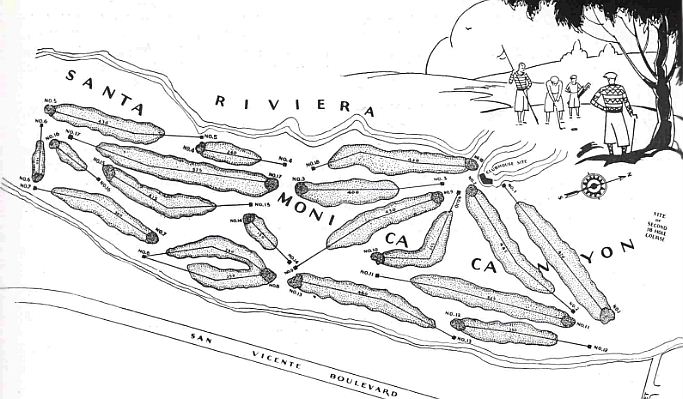 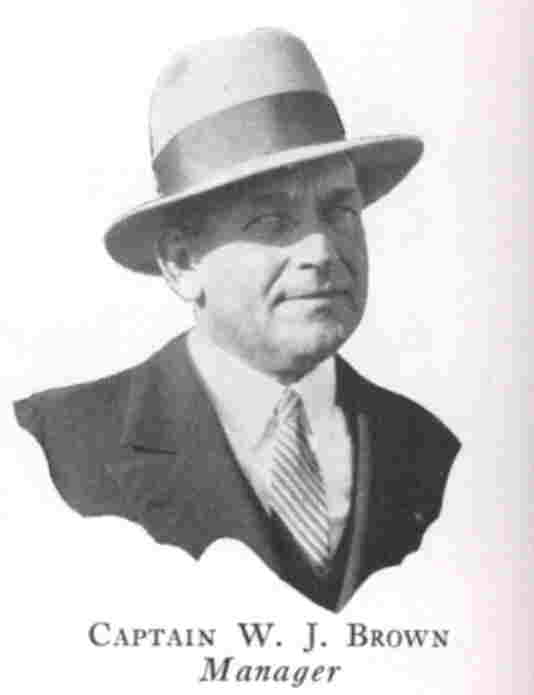 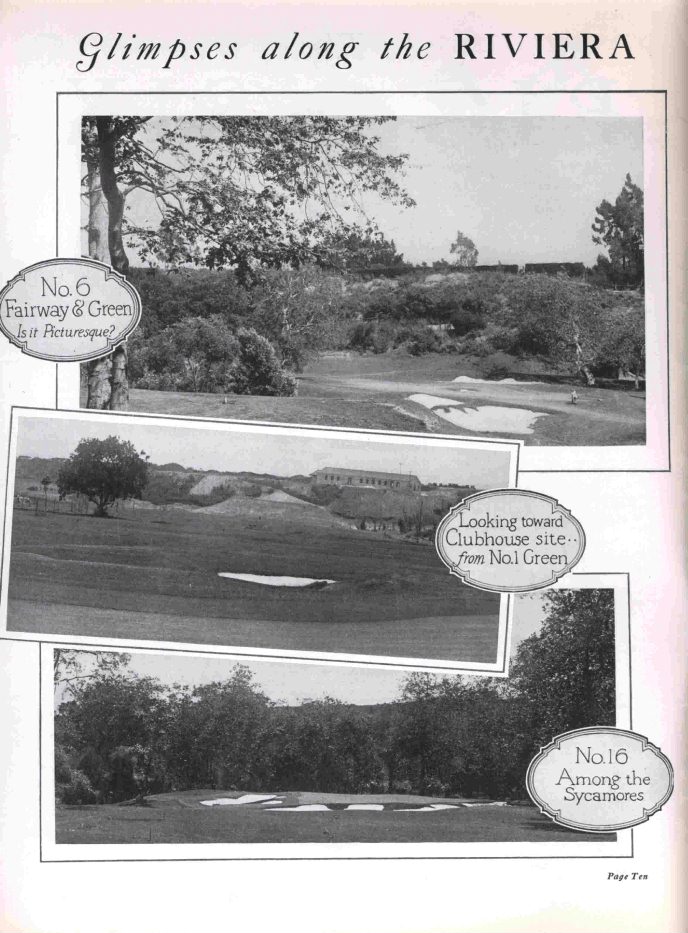