Rye Golf Club, in Rye New York, is my home course.  Designed by Devereux Emmett in 1921, the club has gone through periods of success and failure financially.  In 1965 it was purchased by the city of Rye, to be used by the denizens as a “town course.”  This arrangement, fairly unique for its time, has grown over the years and become a popular way for many communities to own a course, and Rye was one of the earliest to do so in the United States.  Set up as a “self funding, self liquidating” enterprise fund, the Rye Golf Club, which also has a community pool, is a town treasure.

Dev Emmet was very active in the Westchester, NY vicinity in the 1920’s, and while many of his more famous designs include venerable courses including Garden City, Congressional, Pelham and Leather Stocking ), many of his New York area courses have stood the test of time.  In fact, no fewer than  twenty eight courses in the MGA alone bear his name Emmet.

Emmet’s work at Rye employed many of his noted design techniques.  He emphasized aerial carry and smaller greens, requiring precision on the approach.   Rye’s greens are typically on the small side with the a consistent tilt to them- a rotating saucer feel  to most of them.

Rye is not an overly long course at 6,500 yards, and while Rye has added yardage wherever it has been able to, it relies heavily on its natural topography.  The course sits on property that slopes from the land down to the Long Island Sound.  Many of its holes employ this slope effectively, adding both to the Emmet concept of aerial carry and adding ‘effective length’ on many of the uphill running holes.

Rye also has a group of blind shots throughout.   Blind shots come into play on seven holes, with one, the eleventh, having two (for most humans).   While blind shots have their detractors, it is noted by the author, recently returned from Northern Ireland, that blind shots in fact are part and parcel of the deal.

There are several seaside holes that are aesthetically pleasing, visually enhanced by recent tree-clearing that has brought into view LI Sound into view on nine holes, including seven of nine on the inward holes. Walking this course as the sun sets with Milton Harbor and the Long Island Sound in view, you really feel as though you have gotten away easy.

In recent years club management has wisely spent their budget in enhancing the grounds, investing in smart tree clearing, improved drainage, greenside bunker refurbishment, and new tee box complexes.  Superintendant Chip Lafferty and his band of merry men have done a most excellent job, in particular the tree clearing greatly improving the staff’s ability to grow grass on tees and greens that were shaded too heavily.  Whereas other “public” courses would not use scarce budget resources on these expensive renovations, Rye Golf Club management has embraced the notion that “if you build it, they will come.”

This hole, originally a short par 5, was recently lengthened to 500 yards in 2006, with a new back tee box.  The original back tees were converted to the middle set, adding more challenge for players of different abilities.   The player hits a blind tee ball into or over a hillside.  From the back tees a player must carry 230 yards to reach this spot- the reward being a gently sloping downhill which will add many yards to a drive and thus setting up the long hitter to go for green on their second.  On most days the player hits this tee ball with a helping wind, but on the odd day when the drive is in his face, mighty is the golfer who can carry the hillside on a fly.  Thus the design change kept with Emmet’s principle of aerial carry.  Tree-lined on both sides, this tee ball says to a player, ‘hey just hit it long and straight,’ a nervy test early in one’s round.  From the hillcrest, the fairway widens a bit and plays about 250 yards gently downhill, leaving a manageable pitch up to an elevated green.   The green, also improved in the 2008, is well-protected right and left with bunkers, and Out-of-bounds behind.  A back-right bunker was added in 2008, primarily to add scenic zest on one’s approach. 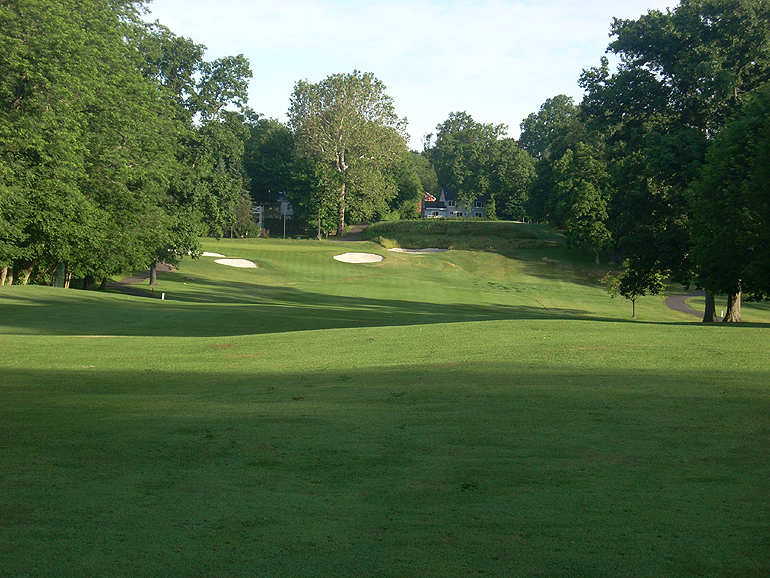 The approach on Number 2, approximately 250 yards from the green.

At 474 yards, this doglegging left par four is one of the most difficult holes in Westchester County, an area with untold riches of golf holes.  It requires a long draw off the tee with trees and OB lining the left, and a blind shot over a large mound into the green that slopes away from the player.  While on the tee a player is inclined to fade it away from these trees, which plays against the right to left landing area which encourages a draw.  So the golfer must ask himself- go for the long draw affording a shorter approach of the safer fade leaving one with a longer approach?  Choices abound on this number two handicap hole, and whichever route the golfer chooses, he must stay committed to be successful on this challenging hole.

Looking back from the green on Number 7, the player must carry a large Hillock to a severely sloping green from right to left on approach.   The blind approach shot must typically carry 180-220 yards depending on the length and position of the drive. 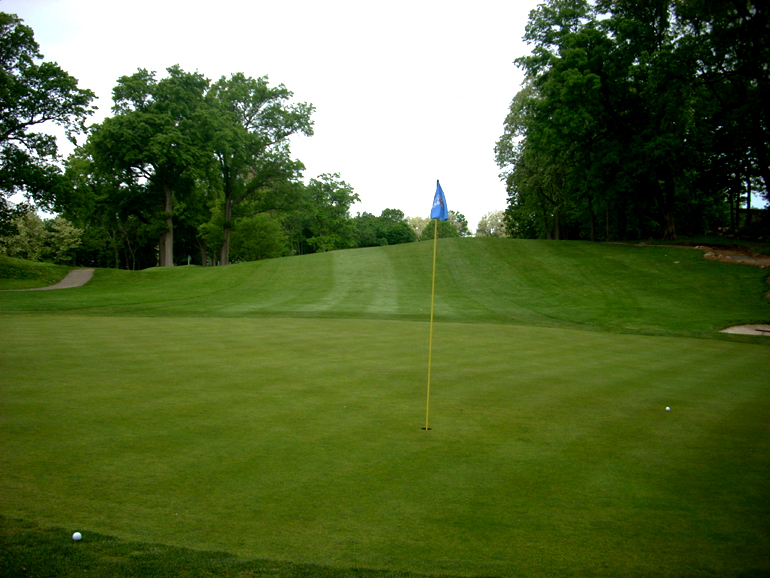 Some describe the first seven holes at Rye a somewhat bearish march.  However, eight and nine gives one a feeling as though he has emerged from the woods into a beautiful, scenic refuge- which he has.  In fact, Rye in some respects goes from a parkland course on holes 1-7, then to somewhat of a seaside course on 8-18.

Eight and Nine are short par fours, and present a real opportunity for the player to pick up strokes, but not without careful execution.

Eight plays with Milton Harbor all along its left.   Sail and power boats taxi through this strait, and the harbor’s Sirens gather many a Pro V1 all season long. Long and right off the tee is a salt water pond, which the long hitter must be cautious of as well.  Hence, a precise tee ball is the meaningful swing thought off this tee.   If successful it will leave an approach of 130-150 yards at most.  However with wind an almost constant hazard along the water, care must be taken with club selection to a green that is severely sloped back to front, and flanked by bunkers on either side.  The player who carefully navigates two good shots on Number Eight is rewarded with a good shot at par or better.

Nine plays back towards eight tee with the same salt pond in play as a forced carry of approximately 185 yards from the tips, leaving the golfer a short pitch of 120 yards or less to the green, if the player manages to avoid the long flanking bunker along the left side of the fairway and the series of bunkers flanking the right.  Nine allows another excellent chance for birdie to the thoughtful player who stays within himself to play the shots. 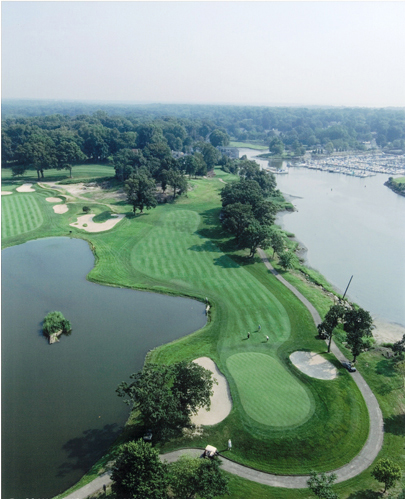 View of the 8th hole, with tee box set back in chute of trees.  Milton Harbor on right. Ninth fairway is in the upper left corner of this photo. 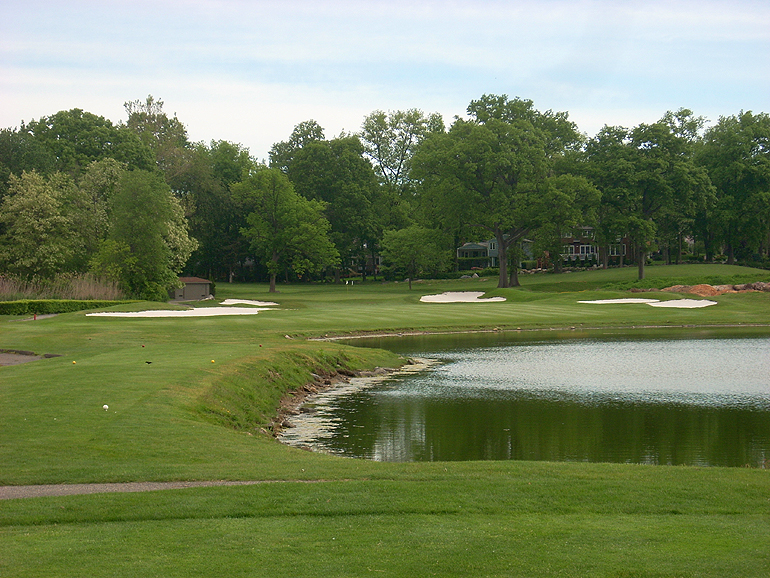 View of the Ninth hole. A short par four, birdie and double bogey are both in play on this open, links-style portion of the course.

At 579 yards, the sheer length of Number 11 is cause for pause.  The tee ball is struck up a gently rising hill, and the second must carry the crest of the hill- unless the golfer can carry the crest 330 yards from the tee.  Mortals thus must play their tee ball and second both blind to the hole, and the second must carry or avoid flanking bunkers in the landing zone of the second.  Two successful shots will leave an approach of about 130-160 yards to an undulating green running away from the golfer.  This is a man-sized three shotter, that for most players feels more like a par 6.  Indeed bogey is a good score here.  Emmet’s use of the rolling landscape again rears its teeth on this hole. 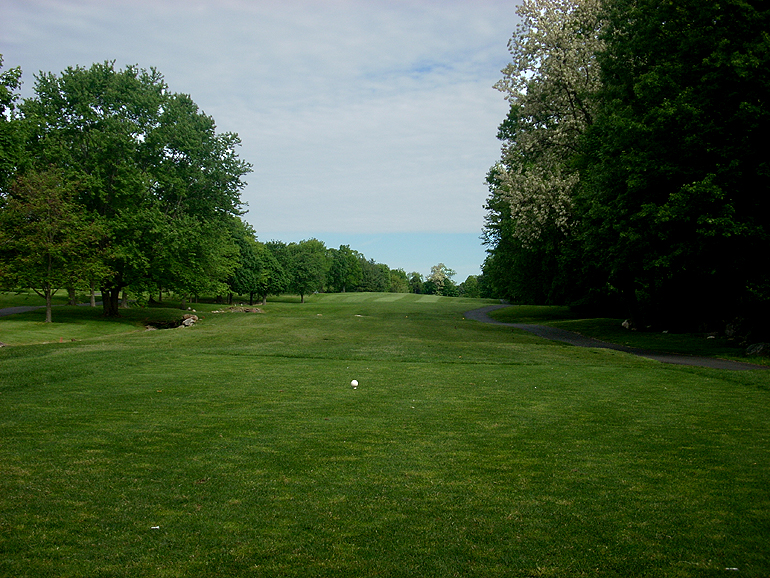 View from the tee on Number 11 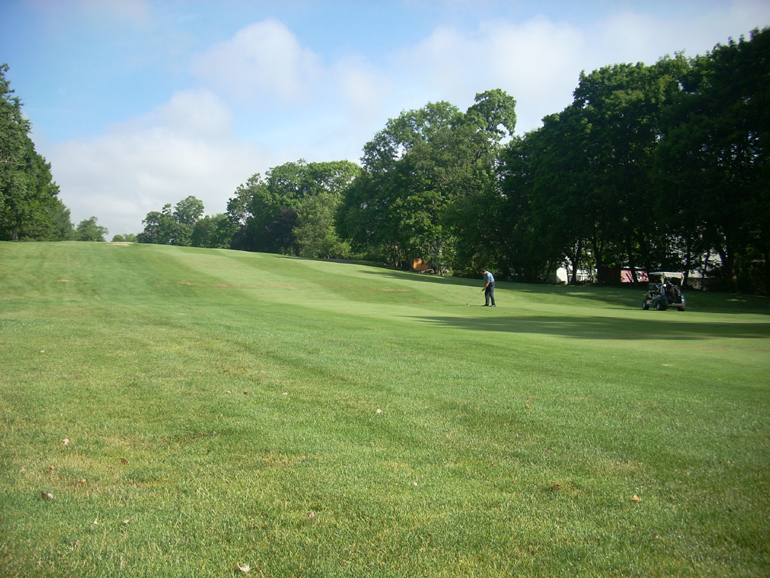 Par 4, 430 yards from the tee the player sees a wide fairway, dropping off down a hill at about 250 yards.   This tee ball should be long, but it also must be placed properly.  A large evergreen guards the left side, effectively blocking a player’s approach if the tee ball wanders too far left, while a thicket of trees lines the entire right side of the hole.   So a controlled fade to the center or center-right of the fairway is ideal.   This hole plays towards Milton Harbor, into the prevailing wind, so the drive to the fairway’s horizon is no small feat- however the Tiger-hitter who can carry the hill will have his ball roll down to a gathering area, leaving a manageable pitch to a left to right green of about 120 yards.   A left side hole location will see most balls run away from the hole, leaving a tricky uphill putt to the hole.

A par three measuring 201 yards from the tips, downhill, to an undulating green sloping back to front.   The player on the tee box has a fine high view of the harbor, marshlands, and Long Island Sound.   Sharing its tee complex with Number 15, the 17th asks a player to correctly judge a back to front green, which is protected by bunkers in the front, and a chipping area behind the green.    A prevailing cross-wind adds havoc to the player’s club choice and line. 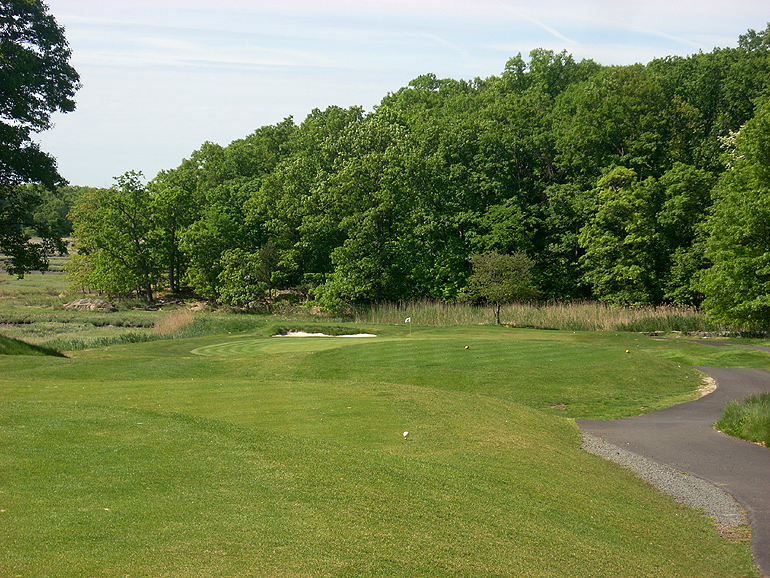 Rye Golf Club rewards the player who stays in control of his game, and gobbles up stokes for those who cannot, particularly off the tee.   The front nine, being more wooded and tight, is a more severe test of this need, while the back opens up more, leaving to more scoring opportunities.   So even in the layout the player who best keeps his head and game together is ultimately rewarded in the end, as it should be.