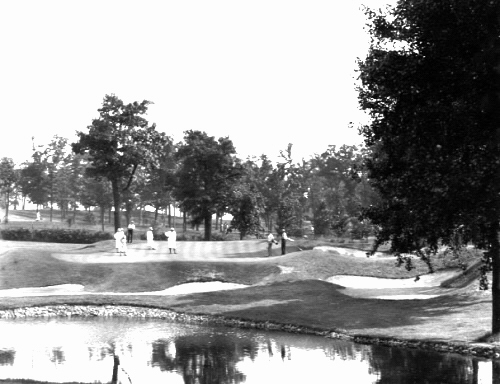 The famous one shot 12th at Beverly Country Club as seen during the 1931 U.S. Amateur Championship

Beverly Country Club was the brainchild of a group of dedicated golfers,who, for some years prior to 1908, operated as the Auburn Park Golf Club on rented land at 79th and Morgan Streets. The club members, wishing to have better grounds and facilities than provided by their small Auburn Park location, appointed a committee in 1907 to search for a more desirable site.

The members of this committee came to recognize the unusual possibilities of the beautifully wooded and hilly rectangle of land, a quarter mile east-to-west and a full mile north-to-south, that lay between Western Avenue (a dirt road then) and the B & O tracks, stretching uninterrupted from 91st Street to a point on the surveyors’charts that is now 83rd St., the north boundary of our present club grounds.

The Auburn Park Club Members approved the site recommended to them by the committee. Much of the site had been known as the Sherman Farm. Perhaps one boundary of that farm was marked by a row of Osage Orange trees that still stretches, interrupted by several fairways, from the western border of the course to the eastern boundary, next to the second fairway. A press account of the club’s planned development quite accurately remarked that, ‘the land is partially wooded, is hilly in places and is altogether well adapted to the game.’ In 1908, Beverly CC was organized, the 160-acre parcel of land was purchased, and the golf course was built.

The community adjacent to this property was known as ‘The Ridge’, in reference to the meandering ridge that traverses part of the front nine and extends through the Dan Ryan Forest Preserve and along Longwood Drive for more than five miles until its terminus in Blue Island. It is often said that the second tee is the highest point in the city of Chicago. Prehistoric Lake Chicago is known to have extended to the basin which now comprises the sixth green, seventh tee, and second fairway. As this area had been the lake’s bed, blue clay is found below the surface. Nature contoured our back-nine beautifully when Lake Chicago deposited large sand dunes on its southern shore. If you were to dig down anywhere on that side, you would encounter this sand.

The bible of golf course architecture, The Architects of Golf, states that Beverly was designed in 1907 by Donald Ross. The date that he designed Beverly may be in question, but there is little doubt that the course we enjoy today has the earmarks of a Ross classic. Ross, a Scotsman, was an extremely prolific course architect and may in fact be the world’s most famous designer. Unfortunately, we do not have the original Ross drawing for his design of Beverly. Perhaps it was destroyed in one of the two clubhouse fires that we experienced prior to 1918. In the Board’s minutes from 1922, ‘the Grounds Committee was authorized ¦ to complete its reconstruction of the course under the Ross Plan.’

Over the ensuing years, the club followed the Ross Plan, to produce our championship layout. The routing is much the same today, although the first and ninth holes were modified in 1932 to accommodate the building of 87th Street. Perhaps the biggest difference is the vast number of trees that have since been planted and add to Beverly’s difficulty.

Perhaps the truest reflection of the quality of a championship golf course is reflected in the champions it has produced. Beverly’s tournaments have produced some truly great champions. Among them are Arnold Palmer, Jack Nicklaus, Francis Ouimet, and Chick Evans.

In 1910, the Western Open made the first of its four appearances at Beverly. Chick Evans, Jr. bested George Simpson, in the first Western conducted at match-play. At the time, the Western was second only in importance to the US Open. 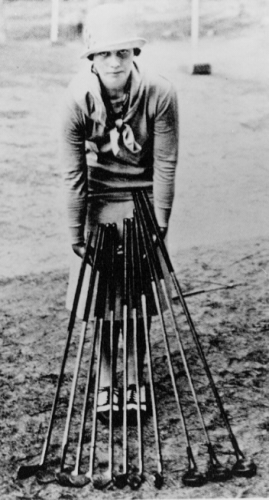 The sixth annual Women’s Western Junior was contested at Beverly in 1925 and a new star was born. The champion was Beverly’s own Miss Virginia Van Wie. Miss Van Wie would use this first victory to go on to a very storied career as one of the world’s greatest amateur female golfers as she was acclaimed to be following her third Women’s US Amateur title in 1934. 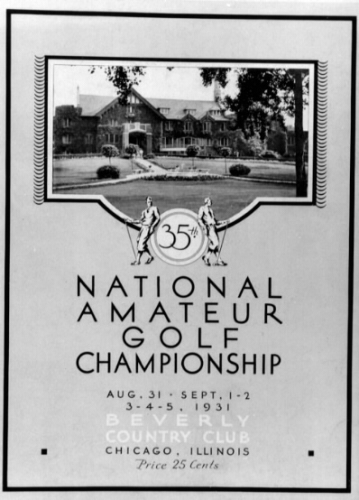 1930 saw the debut of the newly remodeled championship links when Johnny Lehman captured the Western Amateur title by defeating Ira Couch, 4 and 2.

To put Beverly’s championship pedigree in its proper perspective, the 1929 US Amateur was hosted by Pebble Beach. The 1930 version was contested at Merion, where Bobby Jones captured America’s hearts and imagination by winning the ‘Grand Slam’ and abruptly retiring from competitive play. In 1931, Beverly joined this elite group of world-renowned championship layouts by hosting the day’s most important golf event, the National Amateur. Francis Ouimet captured his second Amateur title by defeating Jack Westland on the 32nd hole at match play. Ouimet, the first American to ever win the US Open, later also became the first American to be named Captain of the Royal and Ancient Golf Club of St. Andrews. Jones attended the event, and newspaper accounts mentioned that he ‘held court’ in the Beverly clubhouse, overlooking the 18th green. 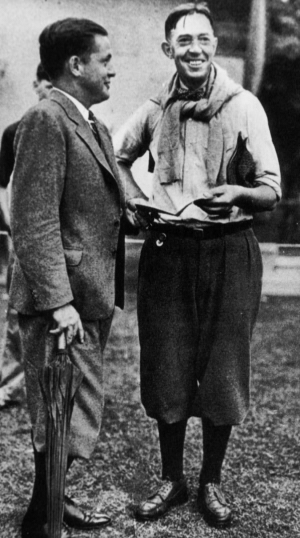 Two of the greatest men the game will ever know, Bob Jones and Francis Ouimet.

The Women’s Western Open, which had always been considered to be one of the LPGA’s Majors, was hosted by BCC three times. Betty Hicks in 1937, Joyce Ziske in 1960, and Susie Maxwell in 1965 were crowned its champions. In 1943, the Chicago Victory National Open Championship was captured by Sam Byrd. The Victory National was a war-time substitute for the National Open. Byrd had previously gained fame as a back-up right-fielder to Babe Ruth on the New York Yankees. Felice Torza was the winner of the 1958 Illinois Open.

In 1963, one of the most exciting Western Opens ever was won by Arnold Palmer , a.k.a. ‘The King’, in a three-way Monday playoff over Jack Nicklaus and Julius Boros. These three men were 1-2-3 on the year’s PGA money list. The playoff was decided on the seventeenth hole, where many a club match meets its conclusion. 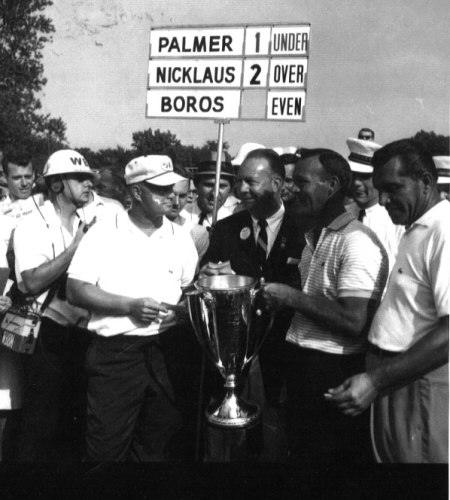 Palmer and Nicklaus battled at Beverly on more than one occasion...

In 1967, Jack Nicklaus added his name to the list of champions at Beverly, when he won the Western Open only three months after a killer tornado had ravaged the golf course and pro shop. It was here that Tom Weiskopf set the competitive course record of 64, which still stands today. Weiskopf’s 64 broke Tommy Armour’s record of 65 which had stood for several decades. 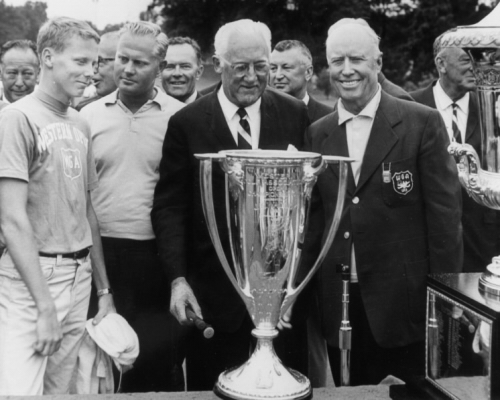 ...with each winning once. Chick Evans (the man on the right in the WGA jacket crest) presented Nicklaus with the trophy some 67 years after his own Western Open victory at Beverly.

In 1970, virtual unknown Hugh Royer won the Western by one shot over Dale Douglass. 1986 saw the Senior PGA Tour stop at Beverly for the one-day BMW Golf Challenge. Seventy-four year-old Sam Snead fired a 68, but was topped by one shot by 1969 US Open Champion Orville Moody. In 1999, Bob Ackerman captured the rejuvenated Chicago Open. The 2000 Chicago Open saw amateur Luke Donald, the NCAA-Champion out of Northwestern University, destroy a solid field by 6 shots, firing rounds of 68-68-69. Despite the tremendous advances in technology, 68 remains the lowest score recorded here during these two Chicago Opens.

Today, Beverly Country Club enjoys its reputation as one of the best tests of golf in all of the Midwest.