Canadian Rod Whitman’s name is not as familar with golfers as it should. Who does appreciate his expertise are Pete Dye and Coore & Crenshaw, the finest architects in the game, and his time is constantly in demand from both firms. Whitman’s first solo effort at Wolf Creek in 1984 highlights the skills he brings to any project. If Wolf Creek was located anywhere else but Ponoka, Alberta, it would have brought Whitman instant notoriety. Regardless, one thing you can be sure: when Whitman is in involved with a project, he is easy to find – he will be onsite, out in the field getting the detail work just right.

1. Is there a particular aspect in your design work that is different from most other modern architects?

I cannot speak for other golf course architects as to their approach to their work. I do know that the successful implementation of one’s design is a goal to which we all strive. I believe I spend as much time in the field as anyone in the business. Some of the shaping and finish grading, particularly greens, is my own work. With that said it should be noted that many people contribute to a successful project and their contribution is often overlooked.

2. How do the advances in both equipment and turf influence your designs?

It basically means you might have to do a little more homework when it comes to deciding which varieties of the different grasses might do well in your area. From a design standpoint I don’t give equipment or grasses a second thought.

3. Firethorn doesn’t seem to receive the recognition it deserves, at least to us. Do you think its geographic location is the biggest reason?

Perhaps. There are a multiple of factors that go into ratings and recognition etc. etc. People in the midwest in general did not strike me as the promotional type. Warren Buffett, one of the richest men in America is a good example of this. Go figure.

4. How would you compare your new nine holes at Firethorn with the existing course?

I don’t really compare the two. I tried to design the course to have some strategic merit and provide for some exciting golf. Having worked with Pete for some time I hope there is enough similarity in the contouring and the grassing not to contrast too much with the original 18. However there are differences and I would hope these differences complement rather than detract from each other. I believe the comparisons are best left up to the membership.

5. On which courses have you worked with Pete Dye? The Austin Country Club (Austin)

6. What aspects of his designs do you admire? What’s your favorite Dye course?

My favorite Pete Dye course probably would be Teeth of the Dog, Casa de Campo, in the Dominican Republic. Having only seen pictures, it struck me as a golfer’s paradise. Of the courses I have seen or played, there are several I enjoyed visiting. One of his earliest designs, Crooked Stick in Carmel, Indiana, is a good solid golf course. I also liked Long Cove on Hilton Head. In the west, the Mountain Course at La Quinta in Palm Springs was also most enjoyable.

Pete’s designs almost invariably ask you to hit certain shots. He wants the golfer to work the ball left to right and right to left. He worked very hard to set up each hole to favor either a draw or fade. I think you can see this on some of his courses.

The later ones were characterized by a hard line on one side of the hole (railroad ties and water or steep sided bunkers with a smooth line). He also would tell me that you make the golf course hard â€œ around the greens. Hence most of the severe contouring on a Pete Dye course is around the greens. This is particularly true at TPC in Florida.

7. If time or expense weren’t considerations, which five courses would you most like to see for the first time?

8. How is Riverhead progressing? What will be the course’s special features?

The project in Riverhead is proceeding well. I hesitate to express what outstanding features will characterize a course that has yet to be finished. There are at present some outstanding natural features which set this course apart. Sand dunes adjacent to Long Island Sound comprise half of the course. Some of the dunes were tree covered and others wind blown and exposed to the elements. The result is a look which is unique, falling somewhere between a Pine Valley and Cypress Point. The other half of the course lies in an agricultural area characterized by broad flowing contours. The nines are mixed, containing elements of both. It is an interesting property and only time well tell how it all fits together.

How exciting does Frairs Head look??

9. The major golf publications all offer their version of the country’s best courses. As an architect, how much importance do you place on these rankings?

10. Tell us about Wolf Creek. Everyone who has been there raves about it.

Wolf Creek was my first solo design, built back in the early 80’s. Located 60 miles from the nearest population center, I had my doubts about its financial viability. However it was a nice piece of property although somewhat small at 140 acres. It did have a creek running through it, and it was comprised of sandy soils, so the decision was made to go ahead. For a person who has professed at times as one who doesn’t move much dirt I confessed we about wore that dirt out shoving it around. The Scottish look was all the rage back then and Pete Dye was reaching the pinnacle of popularity. In a sense we tried to emulate those styles. There are pot bunkers and waste areas and there are hillocks and depressions. We planted different grasses in the rough for contrast (fescues and wheat grasses). From what appeared initially as sheer chaos emerged some pretty good golf holes. The contouring and shaping is what I am most proud of.

I have played with golfers who have commented on what a great piece of property we had to work with. I don’t tell them that virtually all of it was contoured to some extend or another. As much as Wolf Creek was contoured with machinery a considerable amount was done by hand. It was hand staked with a tape measure and stakes with rags tied on them. The small pot bunkers were hand dug and finished by hand. The greens were rough shaped and then finished by hand, adding piles of sand here and there and making subtle cuts with a rake and shovel. Grades were checked with a hand held eye level. Some parts of the course were even seeded by hand with native grasses.

When I think about Wolf Creek I think about some of the people who put their heart and soul into its making, and that is probably why it turned out special.

11. What five holes (from different courses) do you wish you could say you designed? 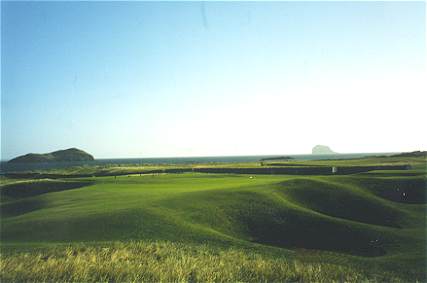 The Redan at North Berwick.

12. What are the design features you are most proud of at Golf de Medoc?

The overall shaping complements the design strategy built into the course. It looks like golf. It feels like golf and if you ask people who have played it, it plays like golf. I can’t really say any design feature stands out, but as a whole it is a place where one can feel really good about the game. 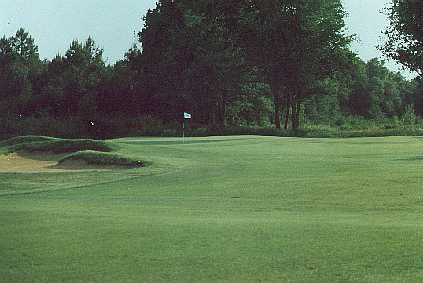 13. What course is a personal favourite with which perhaps the readers may not be familiar? What do you like about it so much?

Rockport, Texas, a golf course Bill Coore designed back in the early 80’s. I spent one winter there playing golf every day. It is a course which was very fun to play. Some of the greens are just fantastic.

14. What are your best sources of inspiration for design ideas?

I was first introduced to the concept of golf course design while I was attending college in Texas. I met Bill Coore who was working at the time on a new Dye course located not far from town. He made me aware of golf as a strategic game â€œ to think about where you want to hit the ball and why. He explained to me the subtleties of different design strategies and he introduced me to a whole library of golf course design books. These still are perhaps the best inspiration for trying to design holes which remain true to the spirit of the game.

15. Who are your three favourite architects of all time and why.

Coore & Crenshaw’s bunkering on the 1st hole at Cuscowilla

How do you pick a favorite?

I have no idea.

17. How do you compare Stanley Thompson’s work at Jasper Park vs. Banff Springs? Do you have a preference as to which course you enjoy more?

They are both nice courses. When I was younger we always made a summer pilgrimage to play at Banff. Some people prefer Jasper. Myself, I think they are both good. 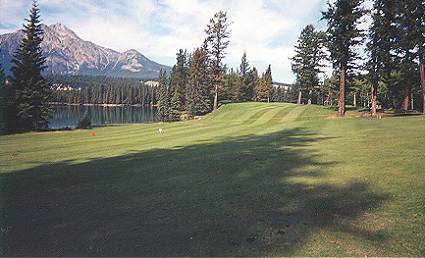 Jasper Park has many admirers.

18. What where the special challenges designing and building a course in Indonesia?