Richard Goodale is a long time participant in, learner from and contributor to GolfClubAtlas.com. His biography hasn’t changed a lot since his July 2005 interview here except to the extent that he is now almost fully employed in the business of writing and publishing golf books and related content. As an American who has played many of the good, the bad and the ugly courses in the United States of America, but has lived in Fife for the past fifteen years, he has a uniquely informative perspective on the game and its history. He studied poetry at Stanford and strategy at Harvard, and his new career is allowing him to finally begin to utilise both of those skills.

Experience Royal Dornoch was Rich’s first book, published in May 2005. Its combination of tight prose, stunning photography and unique 3-dimensional imagery of that great golf course sets it apart. The next volume of the series, Experience The Old Course, St. Andrews Links, was published in June 2006. Although with the same look and feel, significant advances in imaging technology is evident that the publisher, OptimizeGolf, has achieved over the past year. 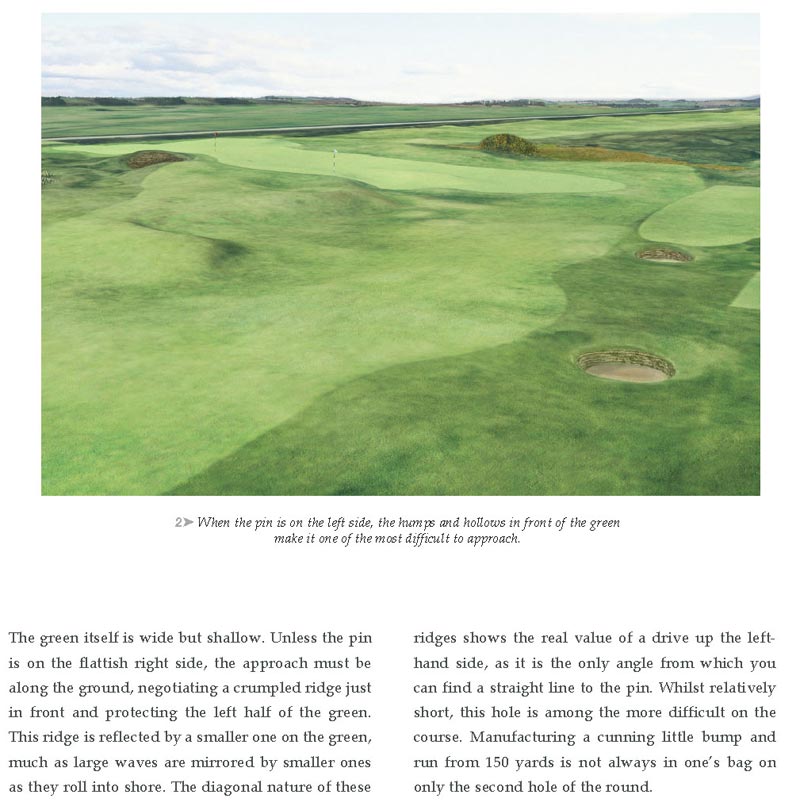 An excerpt from Experience The Old Course describing what to expect while playing the 2nd green complex.

For one thing, it’s bigger! For those who judge value by size (a la Ty Webb), its additional 30 pages is more than worth the extra 5 quid. More seriously, there are a number of difference/improvements, particularly:

2. In writing the book what did you – begin! – to learn about the Old Course?

This is a trick question that must have been planted by Tommy Naccarato! As many of you know, I have consistently believed that the Old Course is a great museum or academy of golf but not necessarily a great golf course. Studying the course in conjunction with writing the book, I modified that belief, but only moderately! The course, as a course, is still to me flawed. Too many blind shots, too few great pin positions, too little variety on the approaches to the greens. That being said, I have come to appreciate how important the nature of the green sites have been and are to the true students of the game. They are so complex that to copy them would be impossible as well as a sin (“Valley of” or otherwise). At the very highest levels of understanding (i.e. Bobby Jones, Jack Nicklaus, Tiger Woods) they can be deciphered, but that is really irrelevant to the game that virtually everybody else plays. We are not good enough to understand what is really going on with those greens, from the elite player’s point of view, even those of us who are big shot golf course architects.

3. What was your learning strategy?

I have played the Old Course about 10 times, so I had that going for me ¦.I walked the course a few times (it’s 45 minutes from my house) and watched how it was played in last years Dunhill Cup. The latter was very revealing, being a Pro-Am, as I got to see how a variety of players approached the course from a variety of tees and a variety of subsequent shot locations. One of the things I learned is that the course is still a significantly serious challenge for the non-elite golfer, but a relatively easy course for the pros (except, of course, under Open conditions). As good as the course may be, the best players are better. 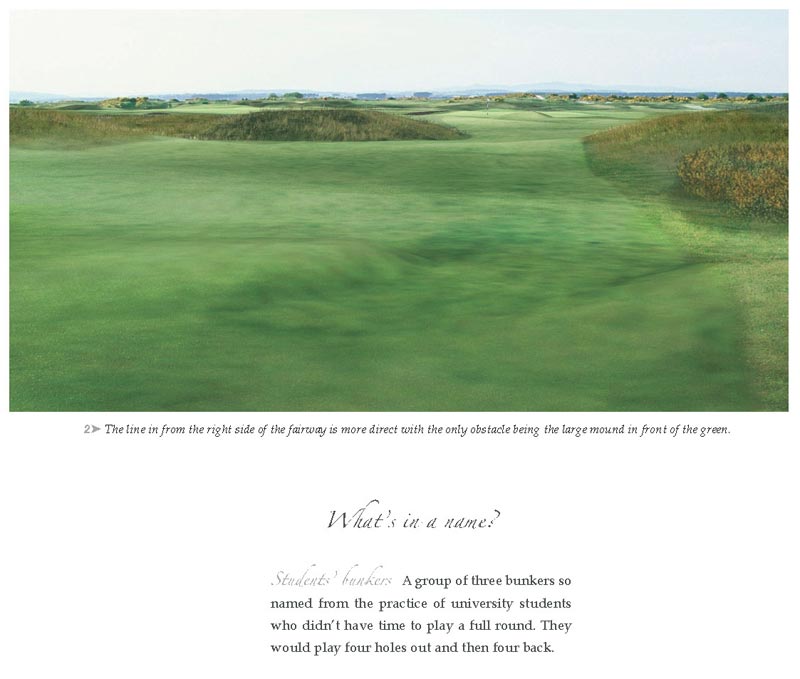 The imagery found in Experience The Old Course is unique.

4. In your study, what holes surprised or enlightened you?

I have been sceptical of the greatness of the 11th in the past, due to its uniqueness (who could ever build a double green abutting a long diagonal ridge) and its width (who could miss such as green, as long as you hit enough club?). That being said, watching it played I realized that geometry of the hole meant that if you hit it offline (right or left) you were very likely to be short of the hole (or in a bunker) and unlikely to get anything better than a 4. I also saw how the difference between a great shot (carrying the bunker) and a poor one could be so marginal, with such radically different results.

I fell in love with the 13th. This hole has it all. A semi-blind tee shot with options â€hit it safe right and the second shot is blind and impossible to get near the Sunday pin short right. Hit it left, you can find your way to the flag, but if the drive is imperfect you have the Coffins or the sublimely named “Cat Trap” awaiting you. A magnificent green. Nirvana.

Finally, the 5th. The long and deep hollow before the green is magic, and only replicated (in my experience and memory) by the 4th at Dornoch. What a great feature that has been far too infrequently appreciated or used, alas ¦

5. Please expand on how your book/technology might shed light on some of the mysteries of playing a few of the holes. For instance, does the aerial highlight when going way left on 14 is prudent?

I think it does if you know what you are looking for! You can see how easy it is to carry the Beardies, but also how crumpled the land is the left of them and beyond. Unless you go all the way to the 5th fairway you will be hitting your second from an iffy lie. Secondly, the immensity of Hell bunker is clear, as well as the fact that if you wish to avoid it, the only real way to avoid it is over or left. Finally, it does show how (relatively) large and flat are the Elysian Fields. It is obviously the preferred line of attack, if you are confident that your controlled has no chance of morphing into a slice….

There are also references on the overhead which guide you to lower level renderings which demonstrate how the hole looks from different angles of approach. For example, it shows how, with certain pin positions, the angle from the left can be the preferred one for the third shot. 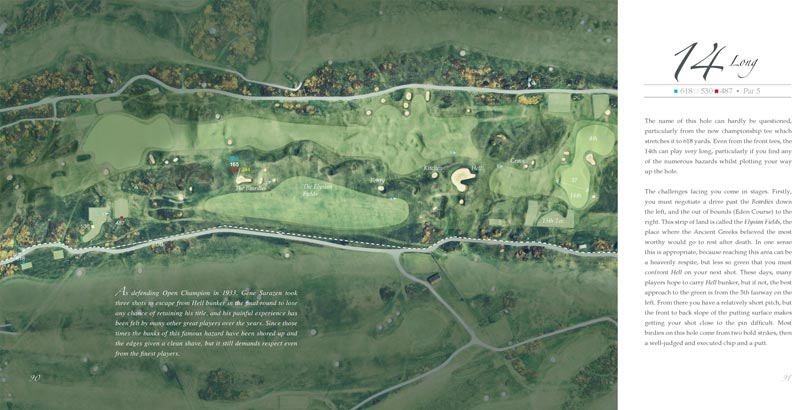 An aerial of the great 14th shows the different playing corridors. 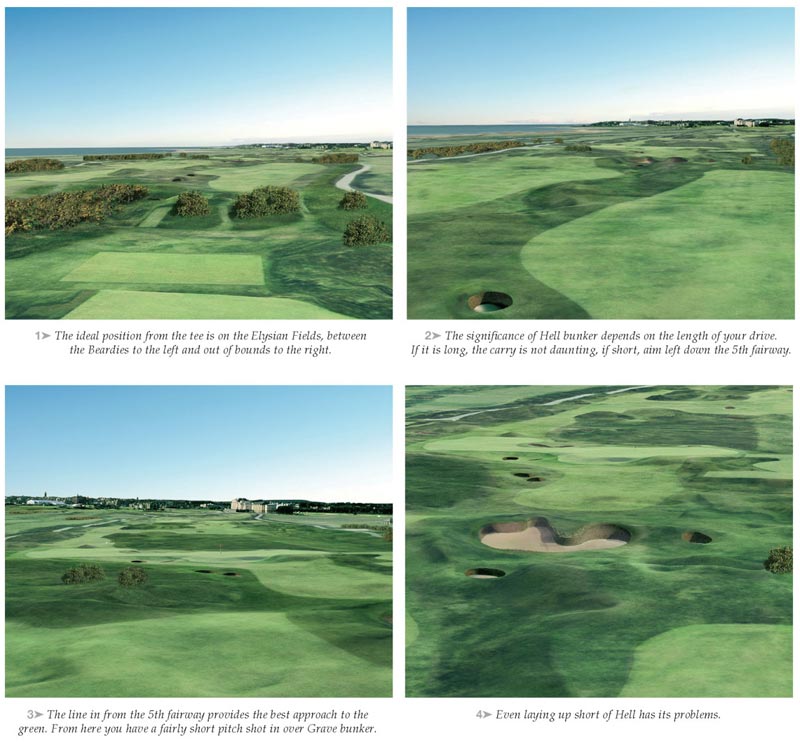 Advice is rendered on how to play the 14th.

6. In that same vein, how about the mysteries of the 10th green? It’s got to be the easiest three putt in golf!!

We talk about and have a couple of renderings showing the subtle (and not so subtle) slopes on that green–particularly the diagonal channel which runs through the putting surface. Nevertheless, one of the subtleties are still subtle, even in the detailed renderings. Even though our technology and know-how is constantly improving (some of the green site renderings we are doing for the Carnoustie book are really spectacular), it is possible that there are limits to how much of the Old Course can (or even ought to be) revealed.

7. Is the riddle off the 12th tee any easier to figure out thanks to your book?

I think it does. There is a really cool set of views, one from tee level and then one from 100 feet over the tee. The latter shows all the bunkers and their placement, and identifies that there is a bail out area left and shortish (200-220 off the tee). However, who amongst us really wants to take that route when you can open your shoulders and try to drive straight, high and long towards the green, hoping to reach it in one, but putting yourself at the mercy of the gods?

8. What did you learn about the history of The Old Course that surprised you?

I had always assumed that the Old Course as we see it today is pretty much as it was 150 years ago, when it played in a reverse fashion out and back over 22 holes. Reading James Balfour’s book was a revelation. Apparently, the outward 9 (11?) of the course was only built ~1850, and before that time most of what are today the “double” greens did not exist. The greens that did exist (the current inward 9) were significantly “softened.” There is a lot more of man’s hand in the Old Course that we might want to believe.

9. Have you played the Reverse Old Course?

Not deliberately, although some of the shots from alternate fairways will be familiar to me! Hopefully, I’ll join other GCAers at the event next April Fool’s day. If so, I think I might be able to bring along some really cool reverse course guides, using our DTM.

10. What’s next for you and OptimizeGolf?

Our third book Experience Carnoustie is in the proofing stage, and should be available early next year, well before the 2007 Open. It will be different and better than the previous two books. There are other books in various stages of the pipeline. We have flown over 50 of the top courses in the UK and Ireland this year and are actively talking to a number of US courses about introducing our technology there.

Directly from OptimizeGolf (www.optimizegolf.com), or from me (r.goodale@btopenworld.com) or from St. Andrews Links Trust or the Royal Dornoch pro shop, or www.amazon.co.uk or selected retail outlets in the UK. There are also additional links (and more samples of the text and imagery) on Google’s new ‘book search’ facility. Better US distribution is coming (should be on Amazon.com by November 1st)!