Bestselling author and award-winning writer-producer Mark Frost studied directing, and playwriting at Carnegie Mellon University. At the age of 20 he began his television career writing for the sci-fi classic The Six Million Dollar Man, after which he moved to Minneapolis and worked as Literary Associate at the Guthrie Theatre. After writing and producing documentaries for PBS, Frost received a Writer’s Guild Award and an Emmy nomination for his work as Executive Story Editor on the celebrated television series Hill Street Blues. His first feature credits came as writer and Associate Producer of The Believers, directed by John Schlesinger and starring Martin Sheen and Jimmy Smits. In 1989, he founded Lynch-Frost Productions with director David Lynch. Together they created and executive produced the legendary ABC series Twin Peaks, receiving four Emmy nominations and a Peabody Award. In 1990 he also created the groundbreaking documentary series American Chronicles. Twentieth Century Fox released Frost’s critically acclaimed directorial feature debut, Storyville, a political thriller starring James Spader and Jason Robards, in 1992.

Frost’s first novel, The List of Seven, became a national bestseller in 1994, and has been published around the world in 31 languages. The sequel, The Six Messiahs, was published in 1996, with his third novel, Before I Wake, following in 1998. In 1999, Frost created and executive produced Buddy Faro, starring Dennis Farina, for CBS. In 2001, he executive produced All Souls for Spelling Television and UPN. His fourth book, a non-fiction account of the 1913 U.S. Open, The Greatest Game Ever Played, became a New York Times’ bestseller in 2002, and won the USGA’s Book of the Year Award. His fifth book, a biography of golfing great Bobby Jones, The Grand Slam, became a national bestseller when it was published in November, 2004. He wrote and produced the feature film of Greatest Game Ever Played for Walt Disney Studios in 2005, and also wrote the international hit movies Fantastic Four and Fantastic Four: Rise of the Silver Surfer for Fox. His fourth novel, a work of World War II historical fiction, The Second Objective, was published in May of 2007. His third book about the history of American golf, The Match: The Day the Game of Golf Changed Forever, will be published in November of 2007. He is currently at work writing a film for Jerry Bruckheimer and Disney, Shattered Union, adapting a film version of The Second Objective, and researching his eighth book, Game Six, a non-fiction account of the 1975 World Series.

In 2005, the Frosts endowed an ongoing scholarship for The Francis Ouimet Scholarship Fund in Boston for students pursuing a career in writing and the performing arts. The Ouimet Fund, founded by the subject of his book Greatest Game in 1949, is the largest of its kind benefiting the education young people in need who have worked in the world of golf. In 2006, he received the Ouimet Fund’s Distinguished Service Award, for his contributions. A native of New York City, Mark Frost lives with in Los Angeles and upstate New York. 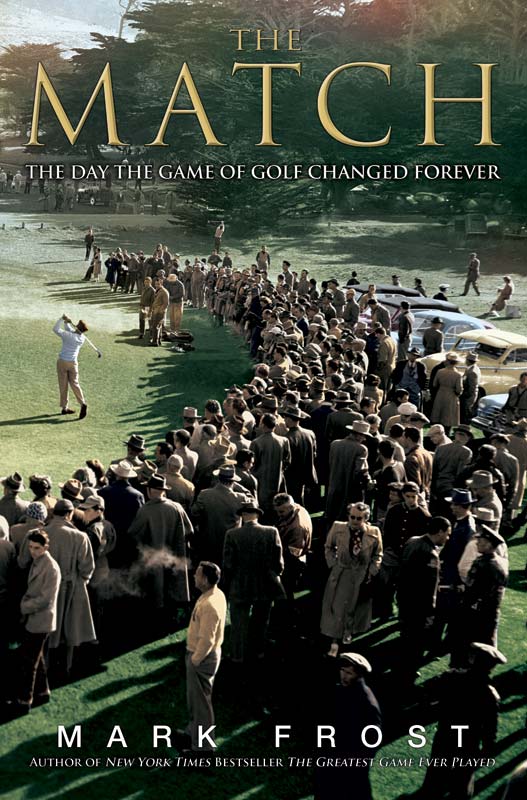 How did you come to know the story of the match?

I first learned about The Match while researching The Greatest Game Ever Played. The story was briefly toldto me by Ben Crenshaw, and subsequently by Ken Venturi.

What did you find so compelling that it led you to undertake a book?

The Match had become a kind of urban legend in the game of golf, in the 50 years since the game was played, but the story had never adequately been researched or told in a comprehensive way. Not only was it a memorable event in and of itself, but it brought together four of the most compelling personalities in the history of the sport, at a time and in a way that expressed vividly the transition the sport was about to experience into the dominant era of the professional. I thought it would serve as the perfect centerpiece, from a storytelling point of view, between the golden age of Bob Jones and the modern world of the professional tour.

Given the fact that very little has ever been written about it, how did you research The Match?

The match was re-created exclusively through interviews and oral histories. There was virtually no press coverage from the time to look at. I spoke extensively with Ken Venturi and also Byron Nelson, two of the principles, and with perhaps 75 other people who had some connection to either the players or the event.

You researched the four men extensively. What surprised you most in this process?

The two biggest discoveries were the long and complicated relationship between Byron Nelson and Ben Hogan, about which very little has been written, and the absolutely remarkable story of Harvie Ward, one of the most interesting and tragic figures in the entire history of American golf.

Of the men described in the book, who left the biggest impression on you?

Each of the men involved is fascinating for wildly different reasons, and I would include the other three figures involved as well, Eddie Lowery, George Coleman and Bing Crosby. Ken Venturi has left the biggest impression on me, he’s become a friend, but he’s also the only one I’ve written about that I’ve been able to know personally, the first time that’s happened since I began writing the golf books.

What fascinated you about Marion Hollins?

As the creator of Cypress Point and Passatiempo, Marion Hollins is one of the most striking and original figures in the history of American golf. During the 1920s, you can only describe her as the female Bob Jones, and her lasting contributions to the game are nearly as significant. Her story is also every bit as tragic as Jones’. I hope her inclusion in the book creates more interest in this remarkable woman.

Cypress changes morning to afternoon with the weather. What was the weather like the day they teed off in January?

The Match was played at 10 AM on January 10, 1956, and the weather that day could only be described as perfect; mild temperatures, no wind, a little mist in the morning, and a few clouds in the afternoon. Less than two days later a drenching winter storm nearly wiped out the Crosby Pro-Am. The timing could not have been better.

What was the format of the match?

The format was a better-ball match, the two amateurs Ken Venturi and Harvie Ward, versus the two professionals, Ben Hogan and Byron Nelson.

The round began in almost complete obscurity, which was the only way Hogan would agree to play it. He had kept a tee time for a practice round at nearby Pebble Beach that morning, and hundred showed up in anticipation of watching him play. He didn’t want anyone seeing him play, as he put it, “a couple of amateurs.” By the time they reached the last four or five holes word had gotten around the peninsula that the match was taking place, and, depending on who you talk to, as many as five to 10,000 people had gathered to watch them finish.

The first hole was halved with par, with neither Hogan nor Venturi able to hole their birdie putts on the first green with its pronounced back to front tilt. How many subsequent holes were halved in par?

Only three holes were halved with par in the match; the first, the 11th, and the 14th. The others were decided by the 27 birdies, and the one eagle, that the four men carded.

How did the format effect the decisions on how to play the ninth hole?

The ninth hole is a short, sometimes drivable par four, with a lot of trouble on either side of a narrow fairway. The smart play is a long iron to the middle, and a wedge to the green. Given the best ball format, three of the four men went for broke, and two of them hit the green off the tee.

Describe the play at the tenth, which was the only hole that wasn’t halved.

The 10th turned out to be one of the pivotal moments of the match, when Hogan holed an 80 yard pitch shot for an eagle to win the hole.

The sixteenth is world famous, both for its stunning beauty as well as its sheer challenge. How did these men fare against this monster?

Given the mild conditions, and the lack of wind, the wonderful, dreaded sixteenth didn’t provide the usual obstacles; all four men reached the green, and it was halved with birdies by Nelson and Ward.

In 1956, how much smaller was the cypress tree in the seventeenth fairway than it is today?

I don’t know the answer to this one. Photographs seem to indicate that it’s only slightly smaller, and still provided a formidable obstacle.

How did all four men play the seventeenth?

The 17th, like nearly every other hole down the stretch, was halved with birdies, this time by Hogan and Ward.

What was the final score?

The final score of The Match was one up. But to tell people who won would deprive them of the pleasure of finding out for themselves.

The title of the book is The Match â€œ The Day the Game of Golf Changed Forever. Please elabourate.

After writing the book, and reflecting on these events, it seemed clear to me that this private, seemingly casual match between four friends marked a clear dividing line between the game’s past and its future. For the better part of three generations amateurs had been able to play at a comparable level with professionals, and on occasion even dominated them. They represented two very different evolutionary strands of the game – the upper-class amateurs who saw themselves as the game’s patrons and caretakers, and the working class pros who struggled to simply make a living at it. During the early 1950s, many people felt that the American amateurs included more superior players than the professional ranks, and that the Walker Cup teams from this period might well have beaten the Ryder Cup teams. We’ll never know for certain, but what we can say without fear of contradiction is that soon after the match was played â€œ a period when both Venturi and Ward nearly won the Masters – the professional player took over the game for good. With the advent of televised coverage, the entrance of Arnold Palmer, and a stunning increase in the size of professional prize money, the question of whether gifted amateurs should turn pro became a moot point. And since amateurs and pros have never again shared equal footing. The game had indeed changed forever. Has it been for the better? Certainly for the players. Whether it’s been so for the game itself is a more complicated question to answer.