Gary Larrabee has covered golf on the North Shore of Boston for over thirty years for The Beverly Times, The Salem Evening News, MassGolfer, the New England PGA Yearbook, and Golf World Magazine. In addition, he has authored club history books for Wenham Country Club and Salem Country Club. He is a 25 year member of the Golf Writer’s Association of America. His most recent book The Green and Gold Coast is due out in April and profiles the rich golf history of Boston’s North Shore.

1. What inspired you to write The Green and Gold Coast?

With the biggest golf event ever to be staged on the North Shore fast approaching, and the fact I was in between jobs, I was introduced to a local publisher, Webster Bull, who runs Commonwealth Editions of Beverly, Mass. and he said there would never be a better time to write such a book. In fact, we agreed this would be the ONLY time to write such a volume. We had a great subject to write about. It came together quickly. A little karma, I believe, was responsible as well. If I had not met him through my former boss, if I had not been laid off from my post as a corporate PR director, if the US Senior Open had not been coming up in 2001 at Salem, without all of those issues developing at the same time, this project never would have happened.

2. What was the biggest surprise that you uncovered in your research?

That there were so many ‘unknown’ champions from the North Shore…like Joe Lloyd, who as the Essex County Club pro in 1897 became the only North Shore player to win the U.S. Open, and like Nellie Sargent, forever overshadowed by fellow Essex CC clubmates Margaret and Harriot Curtis, who placed second in two of the first three U.S. Women Amateurs.

3. What was Donald Ross’s first year in America like?

I have to defer Ross biographer Brad Klein on that one, but thanks to a friendship he developed with Essex member George Willett while giving him lessons at Oakley during his years there, Ross became the Essex groundskeeper and pro from 1910 to 1913 and redesigned the Essex layout into one of Ross’s purest designs. 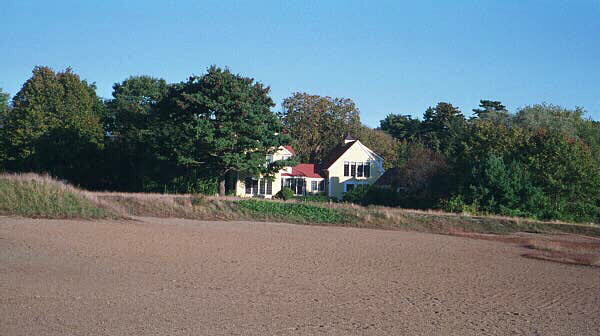 Ross's residence in his early years in the United States. The house overlooks the 15th and 16th holes at Essex County Club.

4. Which course on the North Shore that has been lost through time do you most wish still existed today and why?

North Shore Country Club in East Peabody, Mass., which was originally Salem Golf Club before that membership sought a larger property to expand from nine holes to 18 and became Salem Country Club in West Peabody, site of this year’s U.S. Senior Open. The old-timers say it was a wonderful nine holes that used to host Walter Hagen exhibitions. It sounds like the place had special charm. It is today site of Bishop Fenwick High School.

Stick to the North Shore, and I can simply state that Donald Ross left his mark like no other architect with his Essex (1917 completed), Kernwood (1918 completed) and Salem (1926) layouts. Herbert Leeds left the most significant legacy pre-1900 with his Myopia Hunt Club Links, and Wayne Stiles-John Van Kleek (four courses), Eugene Wogan (three courses), his son Phil Wogan (two) and Geoffrey Cornish (three layouts) have all certainly left their mark as well.

6. If you had to boil it down to three milestone moments in golf course architecture along the North Shore, what would they be?

There is no other course in the world like Leeds’ Myopia — a piece of Scotland smack dab in the North Shore suburbs of Boston. Essex is as natural a layout as Ross ever created. And Salem, well, may be one of the first courses Ross prepared with an eye to the future. Only a handful of yards have been added to his original measurements. It’s virtually the same course they played 75 years ago and they are about to stage the 2001 U.S. Senior Open on it. 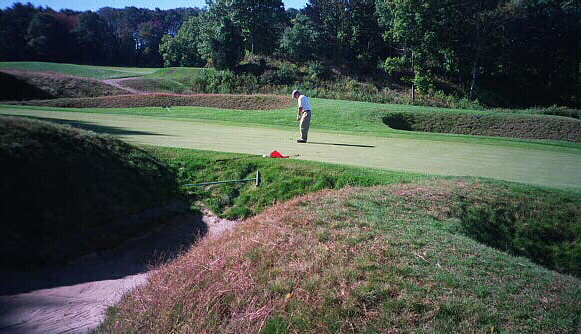 Leed's 9th hole at Myopia Hunt - unlike any other in the States.

7. Who deserves credit for the first nine hole course at Essex County?

Mr. Morrissett: Not discernible in the Essex history, but it appears Essex called in Herbert Leeds from its sister Myopia club to set up its first 18-hole design with the assistance of Walter Travis and John Duncan Dunn, all setting the stage for Ross’ work a decade later. 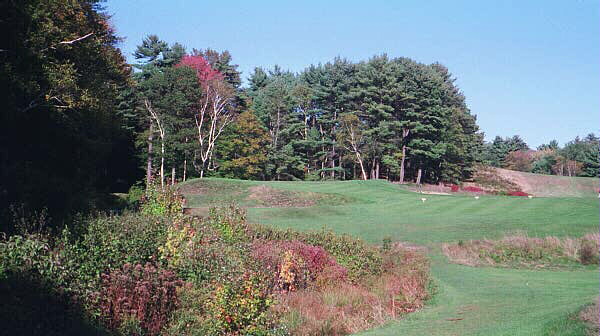 The alarmingly excellent uphill one shot 11th at Essex.

8. What was H.C. Leed’s relationship/influence like with Donald Ross?

There is no reference whatsoever to a Leeds-Ross relationship in either the Essex or Myopia histories. Another mission for Mr. Klein.

Beverly Golf and Tennis Club in Beverly and Larry Gannon Municipal in Lynn must rate as two of the finest city-owned courses in New England, if not beyond. Solid tests, well conditioned, always a treat to play. In a region blessed with 13 nine-holers, there are several worthy of mention here, but I have a special affection for Cape Ann Golf Club in Essex — a neat track with vistas of the region’s unmatched natural beauty and a challenge every time.

10. How do you rate the work of Stiles and Van Kleek on the North Shore?

11. The Green and Gold Coast features over 250 photos, many of which have never been published. Where did you discover them?

It is amazing the photos stashed away and forgotten by families of the people I wrote about. Gems everywhere. I was also blessed with remarkable archives at Essex, Salem, the Boston Herald, the Massachusetts Golf Association, the USGA and the Boston Public Library. But the families were the best source.

12. Was any one source of particular value to you as you compiled the material for the book?

My sources were seemingly infinitesimal. Libraries, historical societies, newspaper morgues, golf associations, golf record books, the exceptional files I have retained during my 25 years writing golf for The Salem Evening News, and, most significantly, the people, and the friends and relatives of the people I wrote about. This type of project requires limitless research and a turn-over-every-rock, knock-on-every-door, call-every-phone-number approach.

13. What is your favorite par three, par four and par five designed by Ross in the area?

The 194-yard 12th at Kernwood looks like an easy downhill par-three, but with a sharply sloping green and tight bunkering flanking both sides of the putting surface, it may rank as his toughest three in the region. The 342-yard 13th at Salem is generally considered one of Ross’ greatest short fours. The smartly placed drive into a funnel shaped fairway leaves a deceptively difficult second shot approach uphill to a three-tiered green. Ross at one time was quoted as calling this the finest green he ever made. Only two of seven contenders for the 1991 Massachusetts Open parred this hole in the final round. The 623 third hole at Essex is spectacular not so much for its length, as for its extraordinary test of a player’s guile. Out of bounds all the way up the left side, countless chocolate drops and waste areas up the right side and reputedly the oldest continuous in-use green in America, featuring a ‘bathtub’ indentation in the lower left front quadrant. A monster in more ways than one. 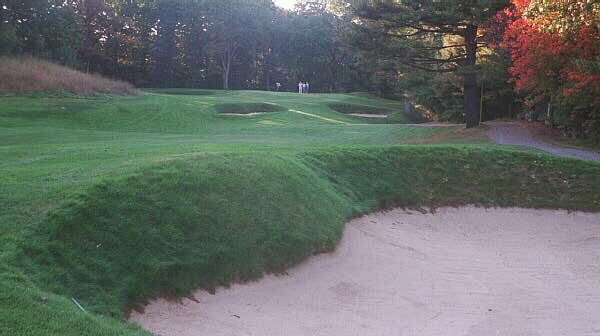 14. Of the thirty-plus courses that Ross designed in Eastern Massachusetts, which one would please him the most in regards to how it plays today?

That is a grossly unfair question to ask. You should be forced to play with pink golf balls for the entire 2001 season for merely suggesting such a query. But seriously, he would have to be pleased with many, chief among them being Brae Burn, Charles River, Winchester, Essex, Salem and Kernwood. What a package. I challenge any region, except for the Monterey Peninsula, which has an unfair advantage on the rest of the world with its incomparable oceanfront location, to match that sextet. 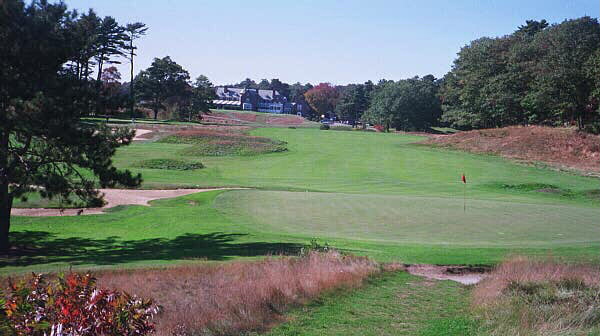 The pleasures of golf at Essex are impossible to overestimate.

15. Is there much interest among the membership of some of these Golden Age courses to restore them to the architect’s original design? Is tree removal the single biggest issue facing many of the clubs?

All of the aforementioned have made painstaking effort to do just that, stick or restore to Ross’ original notions. As big a task as trimming back the tree lines has been bunker maintenance and restoration. At least these Ross clubs, and I am sure there are countless others, are conscientiously making the effort, financial as well as physical, to keep Ross’ greatness alive on its properties.

16. What lies in the future for the North Shore golf community?

A breathtaking new Michael Hurdzan-Dana Fry creation called Turner Hill, due for late 2002 or spring 2003 opening in Ipswich on a former Catholic retreat site encompassing 300 virgin acres. Myopia Hunt Club polo player Ted Raymond envisions this as a PGA/LPGA Tour venue by 2010. A second new course in the works with a fall 2001 scheduled opening is Peabody Municipal, a Geoffrey Cornish-Brian Silva-Michael Mungeam layout that will rival any other upscale public facility in the state.

17. As a long time observer of championship golf at Salem CC, what tips would you give for watching this year’s Senior Open?

Every hole can provide exquisite drama; there is not a weak link in the 18. But the most excitement could come from the Championship fourth (the scorecard 13th; see question 14) and the Championship 18th (members’ ninth), which offered a finish of the highest order during the 1984 U.S. Women’s Open when Hollis Stacy, Amy Alcott and Rosie Jones came to 18 (in different groups) tied for the lead, and only Stacy, the first of the trio to finish, could make par four. Because of limited spectator access and walking trails on several holes, one might be wise to settle in one of the 11,000 bleacher seats or on a soft piece of grass at a green, rather than trek around the 18 holes with your favorite player. With close to 30,000 fans in the daily gallery, fan conditions will be cozy. 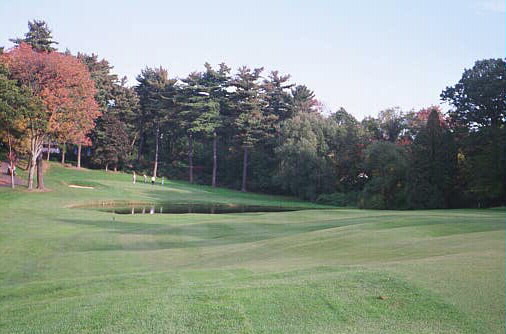 Though the pond is well back from the Championship's 18th green at Salem Country Club, Hogan, Larrabee, and Morrissett all dumped their approaches in it. Only Morrissett got up and down for his bogey.

18. Do you anticipate another USGA championship coming to the North Shore in the near future?

Assuming this is another successful event at Salem (its fifth USGA championship), rest assured the USGA would like to put Salem on a 10 or 15-year Senior Open rotation. Essex is perfect for any kind of women’s or girls’ championship because of its Curtis sisters connection. Myopia should feel obliged to host any kind of national championship the USGA wishes. It would receive unparalleled praise and, as one of the first U.S. Open sites, Myopia would be a glorious venue for a visit back in time. 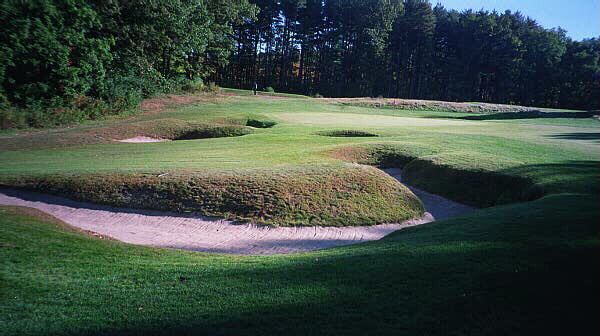 The timeless appeal of Myopia Hunt - if only more could enjoy it. Pictured is the all-world 4th.