When Frank Giordano decided to go to a college prep school at age 13, he started caddying at the Brooklawn Country Club near his home in Bridgeport, Connecticut, to earn his tuition money.  A baseball player at the time, Frank soon learned that the grace and power, the elegance and explosiveness he admired in Joe DiMaggio and Willie Mays were also evident in the gifted golfer.  During a short game clinic he gave to the members at Brooklawn, Julius Boros demonstrated a delicacy of touch in the powerful exercise of his massive hands and forearms.  The naturalness of such poetry in motion, and the unassuming manner by which Julius exhibited such talent, made a lasting impression.

Over the next 55 years, Frank played courses across the United States, the Caribbean islands, and the British Isles.  It was when his own children were ready for prep schools that Frank, whose day job was as a Professor of English Literature at the University of Houston, began publishing stories about golf as a free-lance writer.

“Over my 30 years writing career, I wrote regularly about golf courses and resorts for the Golf Traveler magazine, Private Clubs magazine, and Diversion, as well as for in-flight and city and lifestyle magazines.  I also served as ghost writer for a long series (over 2 years) of Hank Haney’s articles, for a year-long series by LPGA professional Betsy Cullen, and for several other teaching professionals.  My work appeared in Golf, Golf Tips, LINKS, and Golf Illustrated as well.  For the prestigious River Oaks Country Club in Houston, I wrote their history in the early 1990s. As a life member of the Golf Writers Association of America, I interviewed many of the leading tour professionals and golf instructors in Texas while I lived there, and worked often with golf course architects like Robert von Hagge, Bruce Devlin, and Joe Finger.”

His most recent pieces have appeared in the Pilot newspaper in Southern Pines, North Carolina. He has also published two books and tens of articles on wine and art. His paintings of golf courses are exhibited and sold online and in several galleries in the Sandhills area of North Carolina. Frank may be contacted directly via email at warcinc@nc.rr.com. 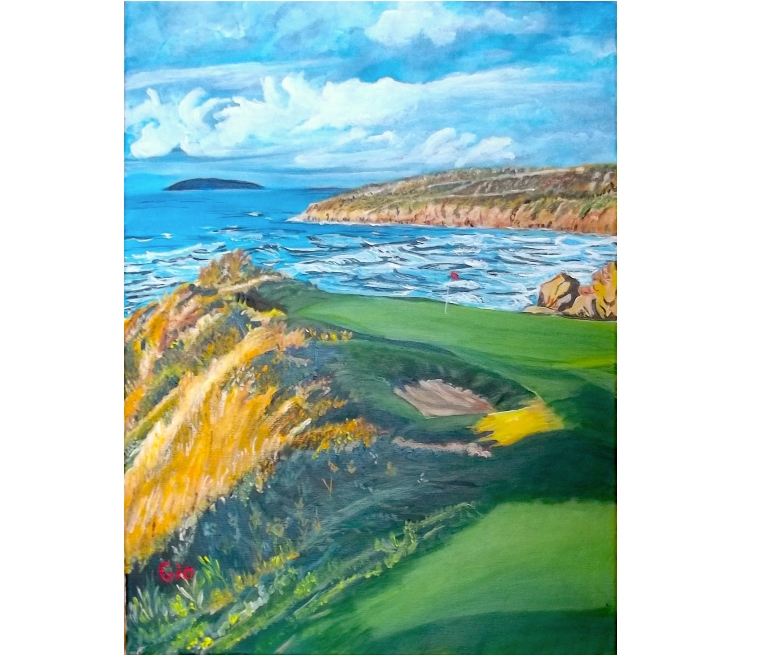 CABOT CLIFFS – It’s a rare course that becomes the very best in its country as soon as it opens for play! Even more unusual is the course that’s compared favorably to Cypress Point, even before it was officially completed. The Coore & Crenshaw Cabot Cliffs, a second course at Cabot Links in Nova Scotia, confronts the golfer with more stunning views and magnificent, dramatic landscapes than might be experienced in most golfers’ lifetimes. The painting above was based on an Evan Schiller photo. Golfers with a penchant for extreme, edgy sport will get a powerful adrenaline rush when they approach pin positions at the back of the 16th green. The less adventurous golfers might just take two putts, a quick look over the cliff from the center of the green, and move on gingerly to the next tee. 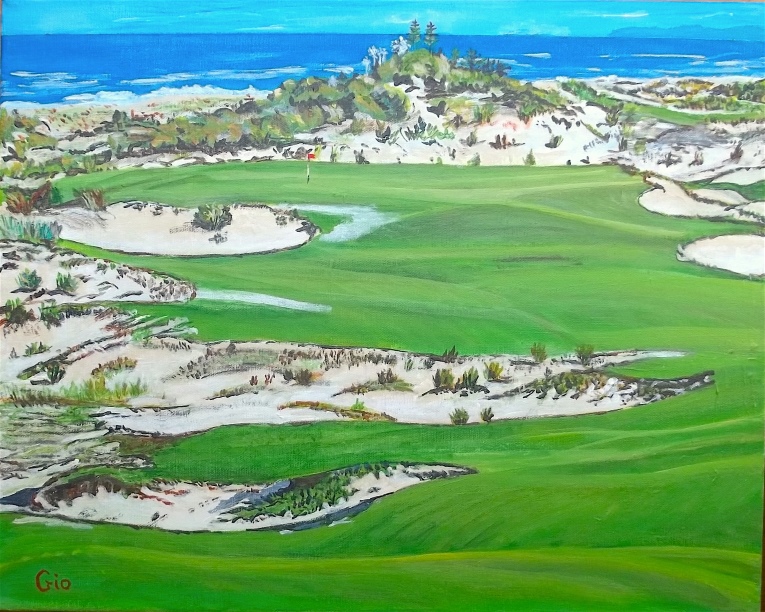 TARA ITI – This stunning par 3 number 15 hole is an absolute visual feast, with its natural bunkers and undulant green placed amid massive sand dunes along the ocean shore. Tara Iti is a relatively new design by Tom Doak. How great a course is Tara Iti? It has recently been voted in the top 25 of the world’s best courses outside America. Doak considers this one of his favorite par 3s. At 165 yards, the bank fronting the green on the left is the most severe hazard here. Just make sure you carry the pot bunker in front, and take your chances from the back of the green. Try not to let the hole’s beauty distract you.

CAPE KIDNAPPERS – This original acrylics painting depicts the stunning terrain on which is built Tom Doak’s recent masterpiece, Cape Kidnappers golf course. Though the course itself is not shown, the majestic cliffs and the placid beach suggest what a marvelous golfing adventure awaits the peripatetic golfer who journeys to New Zealand. Doak has said this piece of land is one of his favorite spots in all of New Zealand.

All the Ballyneal paintings are based on photos taken by Dave Durrance. The 490 Yard par 4 second hole will play 100 yards shorter downwind than into the wind, when it’s a three-shotter for many players. Try to drive to the left-center. For the approach, the right distance is paramount, as the green is very deep. Late afternoon tee times might just gain you a sunset as thrilling as anything you’ve ever seen.

To those who can’t imagine playing golf in No Man’s Land, Colorado, Dick Durrance’s photos of late afternoon sunsets should dispel any anxiety about whether or not a trip to Ballyneal will reward a visitor. The natural beauty of the local landscapes near day’s end — the oranges and mauves on #3, for example — would tempt a French Impressionist to cart up his brushes and catch the first plane to Ballyneal. Your financial investment is more than compensated by the landscape alone.

The short par 3 resembles a traditional Redan hole, and the bank at the left front of the green is the most severe hazard here. Be sure to carry the pot bunker in front, with a slight draw, to reach the pin positions on the left side of the green. Otherwise, play for the center of the hole and, if too long, take your chances from the back of the green.

The three courses at Barton Creek Resort, in the hills north of Austin, have long been acclaimed among Texas’ finest designs. Not many resorts offer a Coore & Crenshaw, a Tom Fazio, and a pair of Arnold Palmer courses. And not many American locations can match the subtle beauty of the oak-forested hills through which the designers threaded their holes. A late summer sunset transforms the lovely dark and emerald greens into the kind of golden pastoral landscapes that Shakespeare and his mates celebrated when golf just came to Merrie Olde England. 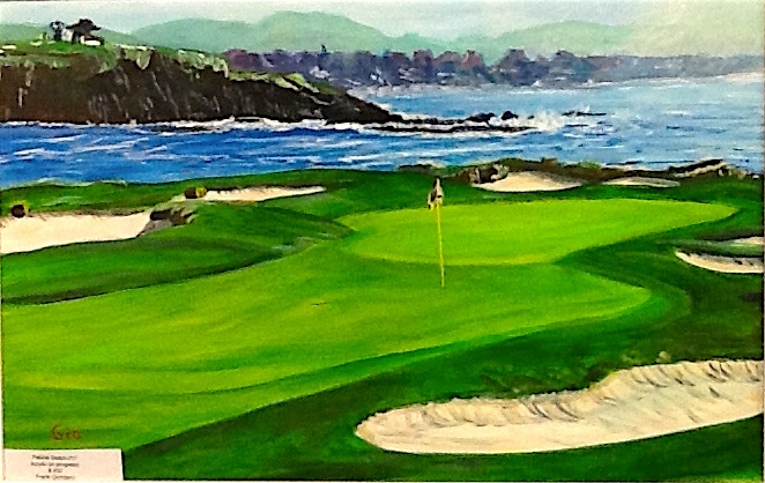 The painting depicts the illustrious and historical 17th hole at America’s iconic golf course, Pebble Beach. Set on the breathtakingly beautiful Monterey peninsula, Pebble Beach is one of the world’s finest as well as most stunningly scenic golf courses. Site of several important golf championships for nearly 100 years, Pebble Beach is probably on more golfers’ “bucket lists” than any other accessible course in the country. Who can forget Tom Watson’s chipping in for a birdie here to secure his US Open victory over Jack Nicklaus in 1982?

This stirring 440 yd par 4 hole, with a narrow driving area and an 80 foot chasm in front of the left side of the green, suggests a veritable golfing Hell, were it not such a helluva hole. The severe right-to-left slope right of the green can cause the despairing player to wonder where to place the approach. However, the green is open in front to accept running shots along the ground. Like the old American Express ad advised, don’t leave home without your bump-and-run shot. The 12×48″ acrylic painting gives a panoramic view of the hole and others nearby. The mountains in the background and the ever-changing Irish skies endow this very challenging hole with a truly epic dimension. It’s only part kiddingly that locals say Arnold designed the front 9, but God created the back.

It looks like it was used for bombardment practice, with ships lobbing explosives from Lake Michigan into the dunes land along the shore. Or it could have been a shower of meteors that fell from the stratosphere and left the shoreline pocked with sandy depressions. Actually, it was Pete Dye’s overheated imagination, in a frenzy of creative ecstasy, that inspired him to produce a work of such extravagance that only the adjective Rococo can begin to describe. Whistling Straits is not a freak, though, as several major American championships, for both men and women, have been conducted there.

This original panoramic acrylic painting, 12×36″ on plywood, depicts a golf hole at the Doak course at the Barnbougle Dunes resort in Tasmania, the Australian Island in the North East. Designed by Tom Doak and some of his associates, the course is open for public play. It has been called the finest modern course by one very knowledgeable writer. The island Tasmania, described as a little bit of golfing paradise, is an ideal location for links golf, with large sand dunes, firm turf, ever-present winds, and plenty of sunshine year-round. This is a “must stop” on the journey of every peripatetic pilgrim with a special veneration for the game.

NGLA: A view from the tee at #17 on the National Golf Links of America. The doyen of British golf writers, Bernard Darwin, early in the last century considered this the finest view in the entire world of golf. Painting based on photo supplied by Jon Cavalier.

Pacific Dunes, #11, a splendid par 3 on Tom Doak’s masterpiece at Bandon Dunes in Oregon. Painting based on Jon Cavalier’s photo.

Kingston Heath, considered the second finest course in Australia, winds its way through the heathland a few miles north of Melbourne. This view of the 10th hole illustrates well the bunkering artistry of Alister Mackenzie. Painting based on Benjamin Litman’s photo.

This 12″ x 36″ acrylic painting is a panoramic view of hole 13A (one of two “extra” holes) at the Coore & Crenshaw Lost Farm course at the Barnbougle Dunes resort on the North East shore of the Australian island of Tasmania. This links course, a neighbor to the Tom Doak-Mike Clayton Dunes course, is situated on what the Australian press calls a little bit of golfing paradise. This work is the latest in what is developing into my “Benjamin Litman Portfolio,” a series of works based on Benjamin’s superb photos.

Cabot Cliffs – Sixth hole. Hard along the Gulf of St. Lawrence, the one shot 6th nestles low among large dunes.

An early C.B. Macdonald “Biarritz” hole, #5, at the prestigious Fishers Island course on Long Island, NY. Painting is based on a photo taken by Jon Cavalier.

The most scenic and electrifying par 3 in golf after #16 at Cypress Point a pitch shot down the Monterey Peninsula coast: Pebble Beach’s #7. 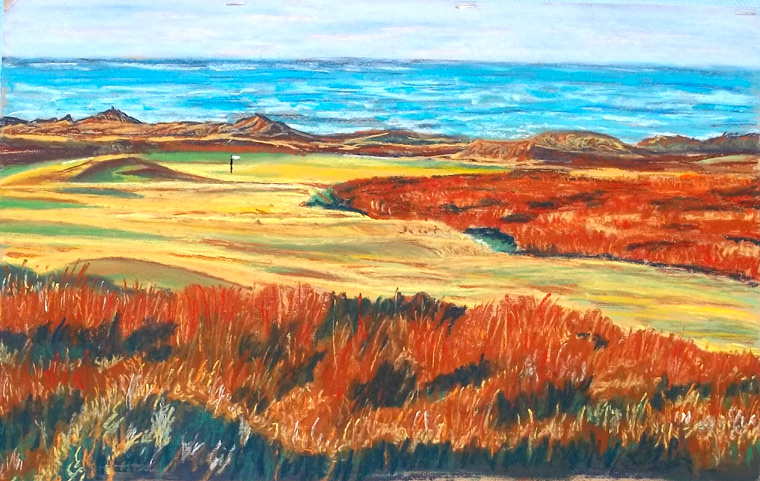 The sometimes drivable 330 yard 8th at Cabot bends right around a natural wetland. Rare for a hole of such modest length, the hole is bunkerless. Nonetheless, it is quite vexing! 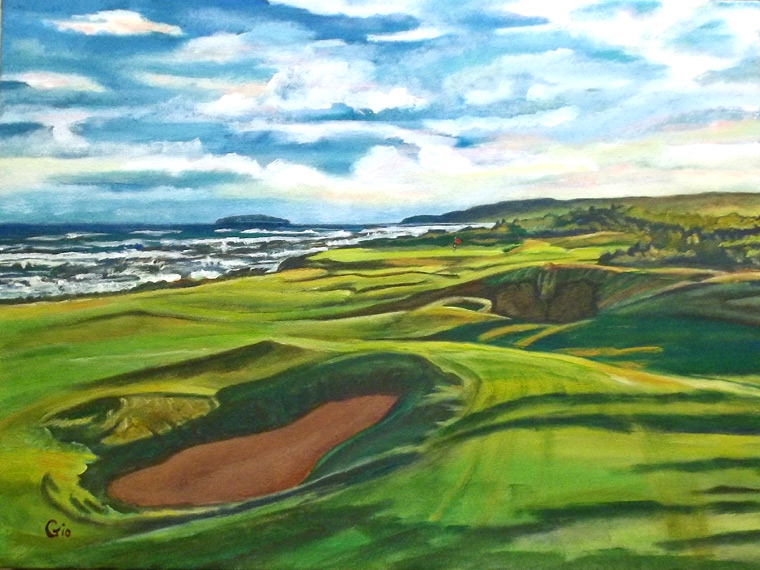 The 455 yard 16th at Cabot Links hugs the coastline but its rolling fairway makes it play much more interesting than cliff top holes cursed with flat fairways. An approach shot played with a draw will take the right to left fairway slope and feed onto the green.

This panoramic view across Cabot Links shows the Gillis Mountains to the north and Margaree Island out in the Gulf of St. Lawrence. Rod Whitman’s low profile features do nothing to distract the eye from the glorious environment. 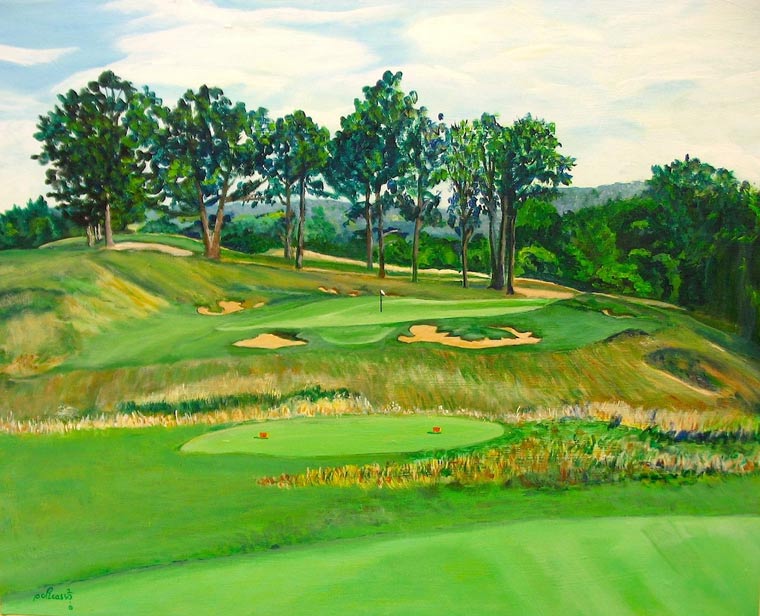 “No. 17 at Ballyhack.” The final par 3 at Ballyhack Golf Club outside Roanoke, Virginia is a short pitch over a deep ravine to a contoured green. The hole is beautifully framed by the tall trees behind it, but shots hit short or to the right right are doomed. The trisected green requires a precise approach to the correct landing area as tee balls finding the wrong segment usually end up with bogey. 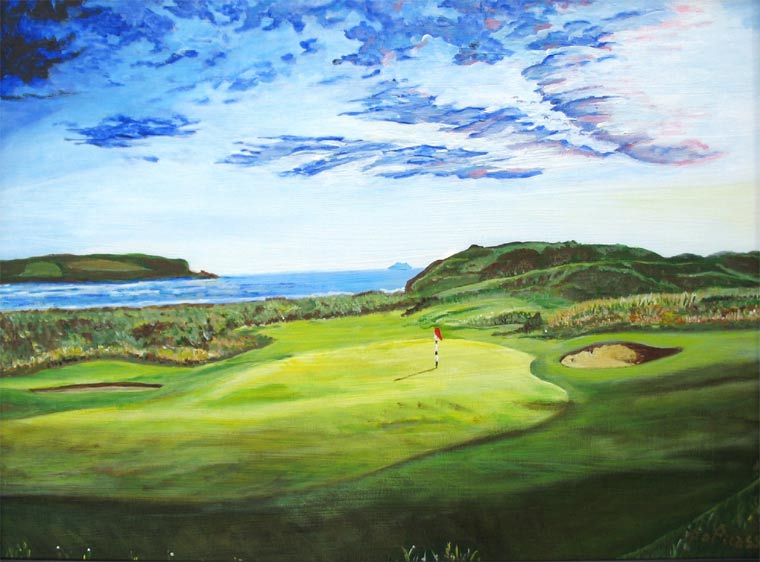 “St. Enodoc #16.” James Braid’s St. Enodoc course on the western coast of Cornwall, England, presents several views of the estuary leading out to the Irish Sea. The wind-swept course is often played under dramatic cloud formations. 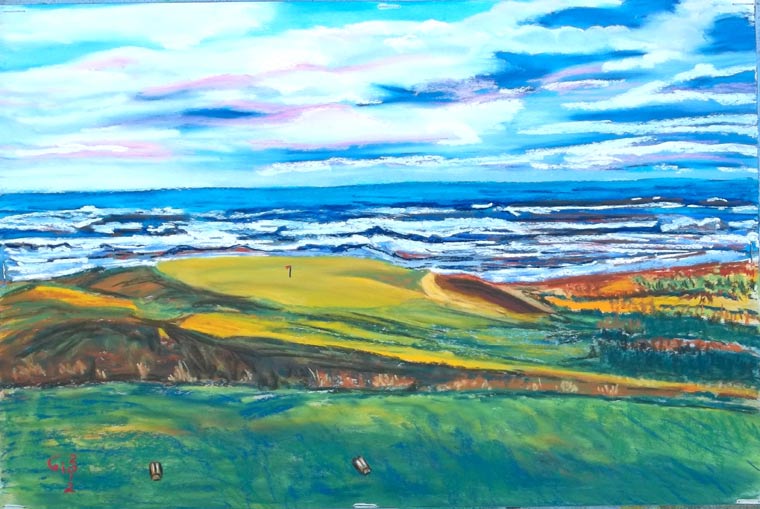 “Cabot #14.” The tiny little par 3 at Cabot Links on Cape Breton Island, Nova Scotia would be an easy pitch if not for the ever present ocean breezes. 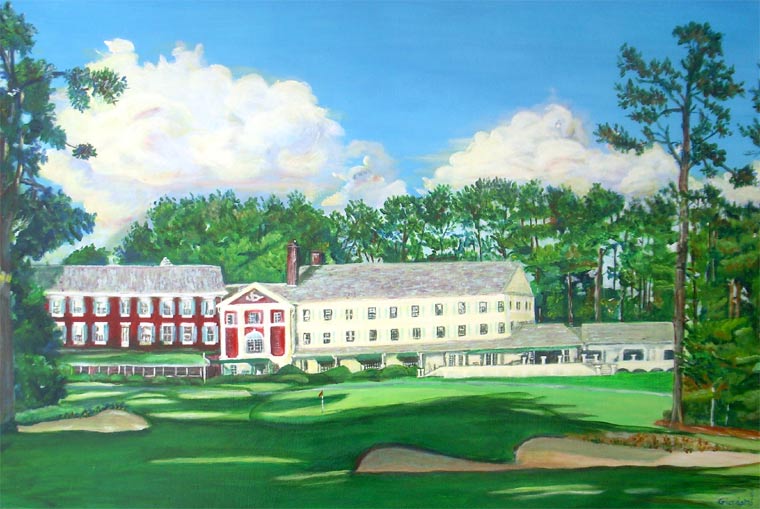 “Up 18 at Mid Pines.” One of the finest views in the entire Sandhills of North Carolina golf region. Late afternoon shadows and forward right bunker make distance control challenging.

For those interested in learning more about his work and perhaps purchasing or commissioning a piece, please contact Frank Giordano via email at warcinc@nc.rr.com.