Feature Interview with Luke Reese
May, 2020 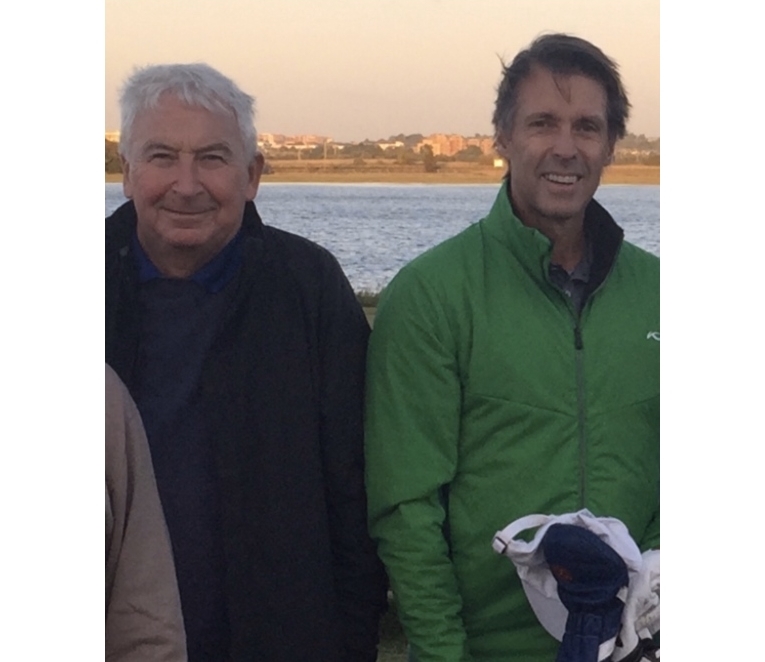 Luke Reese is an American businessman and recently authored his first book entitled One for the Memory Banks.  Its release date is August 1st and can be pre-ordered at www.thememorybanks.com. His abbreviated bio is found there too. Luke presently lives in Chicago and has two daughters. His younger daughter, Olivia, is a senior at Northwestern University.  She recently published on Increasing Frequency of Migraine in the Journal of Practical Neurology and has extensively photographed Scotland. His older daughter, Madeline, won a literature prize her senior year at Princeton University and is the Editor of the book.

1. Give us the background of One For The Memory Banks. What prompted you to write it?

I had the incredible good fortune to be taught to play golf in Scotland by two low-handicap Scots. One was a Scottish Amateur champ. The other was from a working class town on the Ayrshire coast. They were entertaining, competitive and great guys.  I thought I would share the story of learning from them and playing some courses that are off the beaten track.

2. What do you hope the reader will glean from it?

Scots love golf and everyone plays it.  Golf for them:  Play Fast.  Competitive.  In the elements.  Play it as it lies.  Don’t worry about your score (nobody cares).  Have fun.  Some of the best golf in the U.K. is on courses we don’t talk about much.

3. You grew up in Ohio as a college level tennis player and learned golf on the west coast of Scotland when in your mid 30s. How do you approach golf differently because you learned it in Scotland versus America?

I can’t handle a slow round of golf.  Can’t play stroke play.  I don’t like carts.  I celebrate good and bad bounces.  Love watching a ball roll on the ground.  Love alternate ways to get the ball in the hole.  The best courses for me are ones where nature plays the most active role.

4. Share with us the several books that shaped your travel itineraries as you worked around the United Kingdom for Wilson Sporting Goods.

5. You have a particular affinity for Western Gailes. Tell us about that course. You described its golf rich area as follows: “Turnberry is George Clooney or Brad Pitt. It is great looking, big budget and full of substance.  If Cary Grant, an old fashioned leading man, is your hero, try Prestwick with its blind shots and punch bowl greens.  Hitchcock fans would choose Royal Troon for sheer terror with a classic feel.  Western Gailes is Woody Allan: quirkiness with intimacy…”

What’s not to love.  Start with the elegant clubhouse.  Perfect size for the property–similar to Portmarnock.  The two dunes on hole one wipe away all worldly cares.  Passing through them is like being zapped in Men in Black.  You forget everything but the current round.  Many tee boxes are on top of Dunes hitting into valleys.  Maybe,  too many dog left rights in a row–I draw the ball.  Someday, I’ll par number seven, a world class par three.

6. You recount many matches throughout the book, most of which were close. One of the more famous ones, not so much! Tell us about the course at Royal Cinque Ports.

I don’t remember the course.  I played uphill, into the wind, from uneven lies.  Bunkers were deep.  Rough was high.  My opponent played downwind from great lies.   Apparently, I was hungry and thirsty.  Might have lost Five and Three.  The course might have been renamed by the winner.  You don’t have to read far into the book to find the new name.  It’s chapter four. 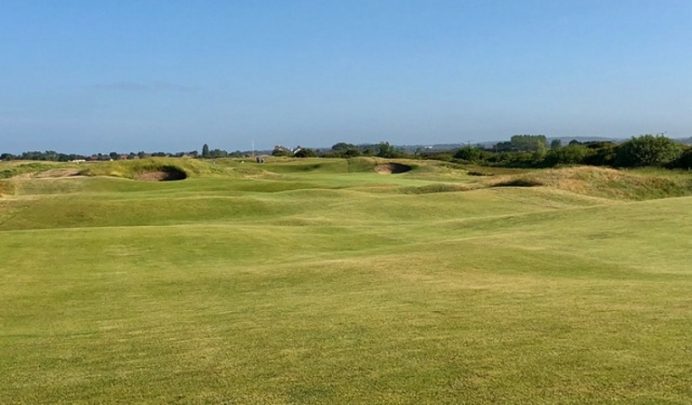 One of the ‘less tight’ matches unfolded at Deal. Sadly for one, play was not required on the mighty 16th, seen above.

7. Tell us about the tiny Scottish town of Bartonholm southwest of Glasgow and its surprisingly strong connection to golf.

Please read the book.  It comes out August 1.  But, this tiny hardscrabble town had three Scottish Amateur Champions in a short span.  One of them as a real character.  Sort of like Hogan and Nelson coming from the same caddy yard.  I was told this story by a former Scottish Amateur Champion during a quick round of golf in the rain at Troon Portland.

8. 15 at Portmarnock is world renown.  However, you also singled out the other one shotter on the second nine. Describe the playing merits of both. I can’t name many nines with a better set of one shotters.

Hole twelve.  Heart be still.  Mid iron.  Huge fescue covered dunes in the back.  Massive false front.  Gaping bunker short right.  Can’t tell what the wind is going to do to the shot.  The putting surface begs for a four putt.  Pure fun and exctiement.

9. You are a smart guy yet the 8th at Portmarnock has befuddled you. What are its playing aspects that have confounded you over the past several decades?

Maybe you and my mom think I’m smart. My kids don’t. Number eight is not long.  The fairway is plenty wide.  But from the tee, I am scared of hitting into the gorse bushes on the right. So I tend to draw it a bit left. This leaves me in light rough with no view of the green. Now I have about an eight iron over a small hill.  From there I either hit into the hill or the ball hits the green and rolls off the back. From the right side of the fairway, the green is quite thin with a huge wall on the right side.  It plays with my mind.

10. Some epic times were had at the usual suspects like Royal Dornoch, Portmarnock and Royal County Down. Any particular favorite out of some of the less heralded courses like the Portland Course at Royal Troon, Lossiemouth, Lundin Links, Glasgow Gailes, Southerndown, and Dollymount?

Many of my favorite memories are from courses that are not as well known as the big attractions.  Great local flavor.  Less tourists playing slow rounds.  Serious local golf.  Do more of it.  Stay in one hotel and play all the cool courses around the main attraction.  For example, stay three or four nights in Dornoch, play Brora, Golspie, Durness, Tain.  And play Dornoch several times.  I prefer it that way. 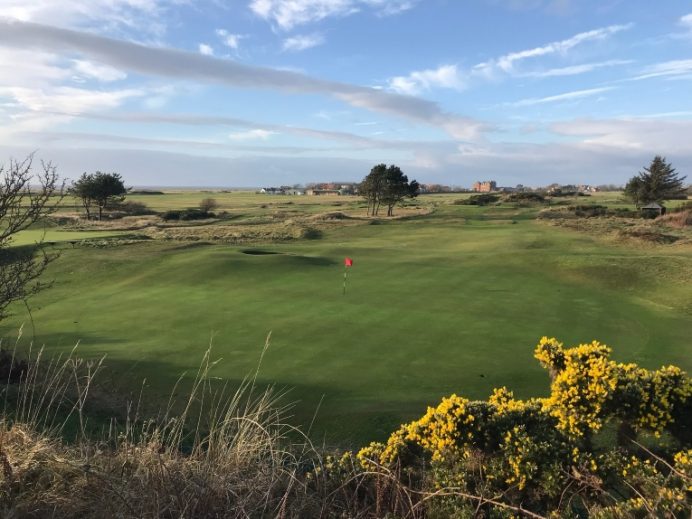 Looking back at the 4th green on the Portland Course, a par 3 of 190 yards. This is one of four Willie Fernie greens that still remain and date back to 1895.

11. How is Dollymount? I have never been but the older I get, the more I appreciate clever designs over flatter properties. You played with a pretty ‘accountant’ there.

Really enjoyed Dollymount, also known as Royal Dublin.  Excellent Colt course.  The holes flow beautifully.  Oddly it seemed as if half the shots used the smokestacks as aiming points.  Not a big fan of internal out of bounds on eighteen…maybe because I hit it there.  Yes, they have some pretty good accountant golfers in Ireland…at least the one we played with who might have won a few majors …

12. Many will relate to this passage: “We played 36 at Pennard, one of the most spectacular, yet quirky, golf courses we had ever been on.  Small wires were strung around the green to keep out the wild horses, which ran around as if on a filming location.  In the middle of the course, few of the holes played past a ruined castle.  Set out on cliffs, holes 16 and 17 still give me goosebumps.  All of us appreciated Pyle & Kenfig, respected and admired Porthcawl, but fell in love with Pennard.”  Yet, is there a modern architect that would be build a course as quirky as Pennard today?

Pennard could only be built today by a really wealthy person willing to completely trust an architect.  Hard to imagine Rye getting done. Or St Enodoc.  Or Brora.  Or Swinley Forest.  Speaking of Swinley,  I can’t wait to see what happens at Sedge Valley.  Herbert Fowler (Walton Heath) had a hand in Pennard.  The pro a long time ago was Gus Faulkner, father of Max Faulker (1951 Royal Portrush).  Random facts. 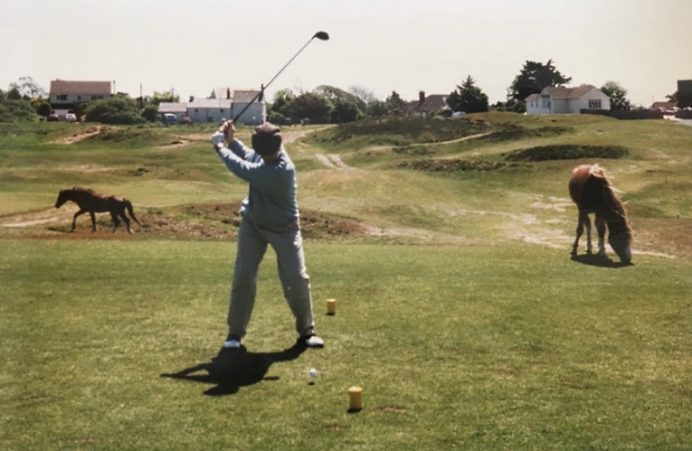 13. You aren’t alone with your sentiments when you write, “Muirfield provided the challenge.  Gullane offers authentic public golf and the Old Clubhouse.  But if I only had one round left in the area, North Berwick would top my list.” What has prompted such a renewed appreciation for the joys of golf at North Berwick this century?

If you don’t love North Berwick, I don’t want to play golf with you. The walls, the Pit, a blind approach, a punchbowl, a sideways Biarritz, parked cars in plain view on a driveable eighteen.  I could play there every day.  Some people love perfectly manicured fairways  with bunkers left and right. No decisions. Hit the ball. Ride a cart. Drink.  I don’t.

14. Bisques is a new term to me, and I wholly support it. My middle brother (who plays off scratch) needs to understand its definition. Please elucidate.

Bisques are travelling strokes.  Use them as you need them after a hole has been decided.  Try to hang on to as many as you can.  One of my Scottish golf mentors was a LOT better than me.  He let me have them to help keep the matches interesting.  It worked.  As an FYI, Marion Hollins refers to them in her book.  An amazing read about a great golfer/business person, as well as an architect.

15. Angus Moir, past Scottish Amateur champion, posed the question one evening, “What five clubs would you join, assuming they would have us?” How would you answer that today? 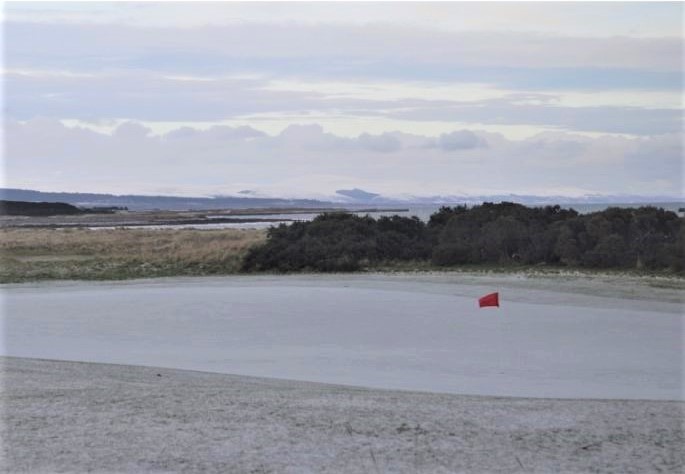 My list would include:  Tara Iti for sure.  Just look at the pictures.  Ric Kayne and Tom Doak have created heaven on earth.  Can’t wait to see what they do next door to it.   Sunningdale.  Love the courses, the clubhouse and the serious golfers.  For Ireland, Portmarnock would nudge past Royal County Down for proximity to a great city. Amazing courses. In the U.S., I guess Cypress Point would trump Sand Hills for the same proximity reasons. Great views.   For Scotland, Royal Dornoch would be my choice. 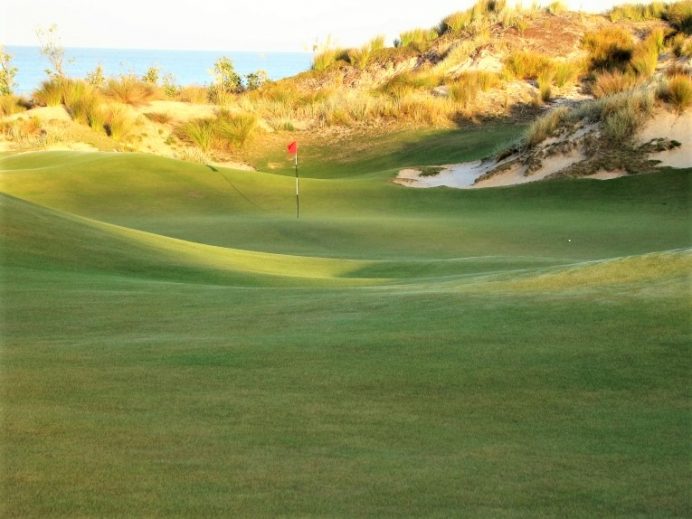 Though battling the elements in the UK brings its own rewards, so does playing at Tara Iti under idyllic conditions!

16. You are now based in Chicago. What % of your games are match play vs stroke? What % of your rounds are played as a two ball?  Compare that to your time spent in the UK.

One hundred percent of my golf is match play.  We play fast.  Our four ball is almost always off the course by 9:30 am on the weekends.  We shower, and eat breakfast while watching the European Tour.  Loser buys breakfast.  More than a 2 and 1 victory allows winners to order berries.  I play a two ball about twenty five percent of the time.  There are about 8 of us who play very fast.  Another ten think they do.  Most members of our club laugh as they see us leaving the club at 10 am after eighteen and breakfast.  Caddies love it.  They are back on the course by mid-morning.

17. Many of the anecdotes hinge on the sledging back and forth between Bondy and you or whoever your opponent was that day. Would you say that such intense interaction with one person often times proves more memorable (to paraphrase from the book title) than playing with a herd of people?

I love playing with a relatively small group of interesting people.  We get to know each other and match play brings out the banter.   We tend to remember who has missed what bad shots in past matches. Might get brought up every once in a while.

18. What attributes have you learned from golf that help you in business?

The ball bounces a lot of ways.  Can’t control that.  You can only control how you respond and how hard you work.   Think long term.  Keep battling.   Keep smiling.  Enjoy the walk.

Please note: Release date is set for August 1st, 2020 and meanwhile, the book can be pre-ordered here: www.thememorybanks.com 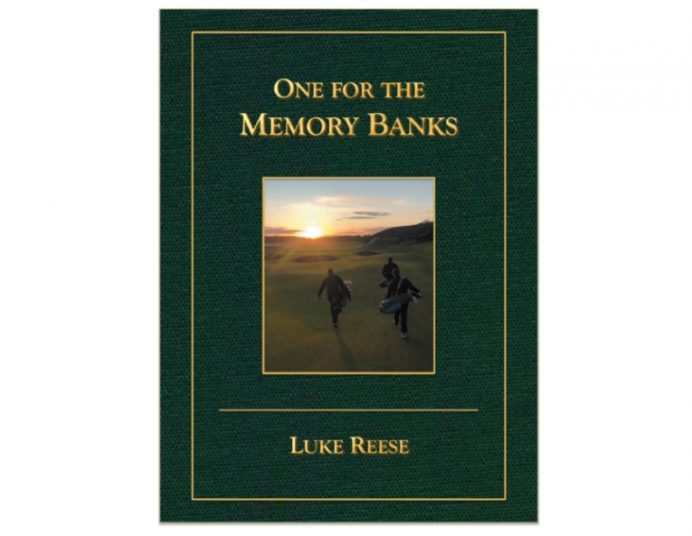