The Golden Age of Pinehurst is Lee Pace’s fourth book documenting the story of Pinehurst. The others were Pinehurst Stories—A Celebration Great Golf and Good Times; the first edition was published in 1991 and a second edition in 1999. The Spirit of Pinehurst followed in 2004. He has written books with former Pinehurst Director of Golf Don Padgett Sr. and LPGA founding member Peggy Kirk Bell. He has also authored the story of Pine Needles and Mid Pines in the 1995 book, Sandhills Classics, which was republished and updated in 2010. Pace wrote and coordinated the production of the Carolinas Golf Association’s centennial book in 2008. He has written about the Sandhills golf scene for twenty-five years for a variety of magazines, including GOLF, Links, Golfweek, Private Clubs, Delta Sky Magazine and US Airways Magazine. Today he writes a monthly golf column for Pine Straw magazine. Pace wrote and edited a coffee-table book for Forsyth Country Club in Winston-Salem. A Century at Forsyth came off the presses in January 2013 to celebrate the club’s centennial. Pace’s passions beyond golf and Pinehurst extend to the University of North Carolina, where he graduated in 1979 with a degree in journalism. He lives today in Chapel Hill and covers the football program through his Extra Points on-line feature and is now in his tenth year as sideline reporter for the Tar Heel Sports Network. 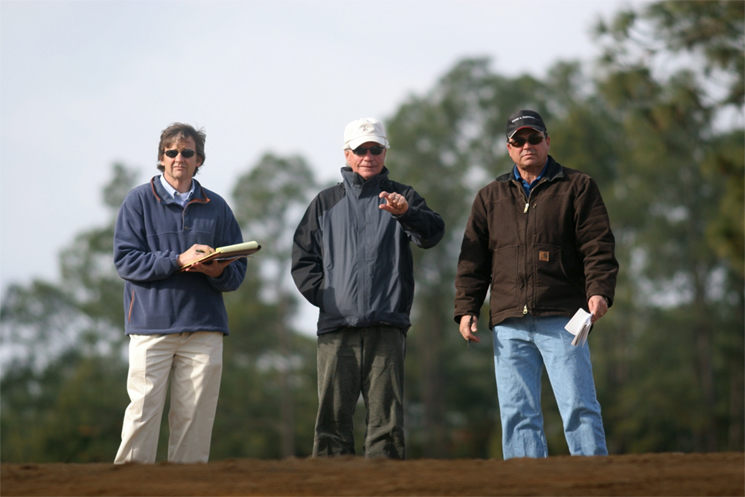 What was the origin for The Golden Age of Pinehurst? This book is another in a series of coffee-table books I have written and produced for Pinehurst dating back to the early 1990s. I started freelancing in 1987 and got to know Pat Corso and Don Padgett Sr. (the key executives at Pinehurst from the late 1980s through the early 2000s) in the course of writing several articles about the new Club Corp regime at Pinehurst and their vision of bringing championship golf back to Pinehurst. Pat was at the Greenbrier in 1990 and found a nice history book on the resort in his room and said, “We need to have one of these for Pinehurst. We need to have a book about Pinehurst, a nice book we can give to the media and USGA and PGA Tour officials and say, ‘This is our story.’” Pat asked if I would be interested in helping them write and produce such a book. Of course, I jumped at the opportunity. I had had some experience editing, designing and producing magazines and coffee-table books, so I knew something about the process beyond just the writing element. I wasn’t sure how a book about Pinehurst should be organized, until early in the process I read about Ben Hogan winning his first PGA Tour event at Pinehurst in 1940, about Jack Nicklaus winning the North and South Amateur in 1959, about local legends like Harvie Ward and Billy Joe Patton winning multiple amateur competitions at Pinehurst. It occurred to me that we should identify a handful of famous golfers who had a story to tell, a landmark experience, a unique perspective about the resort, the village and the No. 2 golf course, then go visit them and write a chapter built around that individual’s experiences. That’s how Pinehurst Stories came about. I visited Hogan, Nicklaus, Ward, Patton, Sam Snead, Arnold Palmer, Bill Campbell, Ben Crenshaw, Curtis Strange, Pete Dye and others to talk about Pinehurst. That was a fascinating experience over about six months from late 1990 to the spring of 1991. I also got three of the finest golf writers in the business to write a piece for this book—Herbert Warren Wind wrote an essay about Richard Tufts, Dick Taylor one about Donald Ross, and Charles Price adapted a couple of earlier GOLF Magazine columns into one piece on the singular nature of the Pinehurst golf experience. Then over the summer of 1991, I sat down at my brand new Macintosh computer with the cute little apple logo on the front and knocked out the design in a program called PageMaker—this in the very early days of desktop publishing. The books were printed in High Point and delivered to Pinehurst at the 11th hour and 59th minute before the TOUR Championship in late October 1991. We updated the book in 1998-99, prior to the U.S. Open coming to No. 2, then in 2004 did an entirely new book called The Spirit of Pinehurst. This new volume included some of the material from the original book, but by now we had remarkable story of that 1999 Open to feature—the success both inside and outside the ropes of the Open’s first visit to Pinehurst. A substantial chapter was devoted to the behind-the-scenes story of how the stars aligned that week and opened the door for Payne Stewart to capture the championship. Looking back 14 years later, it’s incredible how all the dominoes fell that week in Payne’s favor: his warm history with the town dating back to the 1970s, his personal metamorphoses over the 1990s, his coming full circle from using ill-fitted equipment because he was being paid to do so and turning back to clubs he was comfortable with, the confidence he gained by winning at Pebble Beach early in 1999, even his missing the cut at Memphis the week before the Open, allowing him to come to Pinehurst three days early and spend a low-stress weekend studying the golf course and mapping out a game plan. Then, of course, that putt, that 20-footer to win on the last stroke of the championship. A photographer from California named Rob Brown captured the image in a panoramic format the instant the ball fell into the hole—now the iconic “One Moment in Time” photo that will forever define the 1999 Open in my mind. Five years later, the club had exhausted its inventory of The Spirit books, so it was time to do another, particularly with the 2014 Open double-header on the horizon. When I learned in November 2009 that Pinehurst was talking to Bill Coore and Ben Crenshaw about a major restoration project on No. 2, I thought that would be the perfect hook around which to build a new book. I talked with Bill and Ben and they were comfortable with having me shadow them during their visits to Pinehurst over 2010 and 2011 as they embarked on the transformation of the course. Any time either of them was in town over the next 18 months, I was there for at least a day. It was a fascinating experience. So that’s how the book evolved: tell the Pinehurst story in the context of the No. 2 course, how it evolved, what happened and what is happening now. So the trilogy of books over more than two decades has included one volume that highlighted the individuals, a second that spotlighted the great competitions, and now a third built around a single golf course. 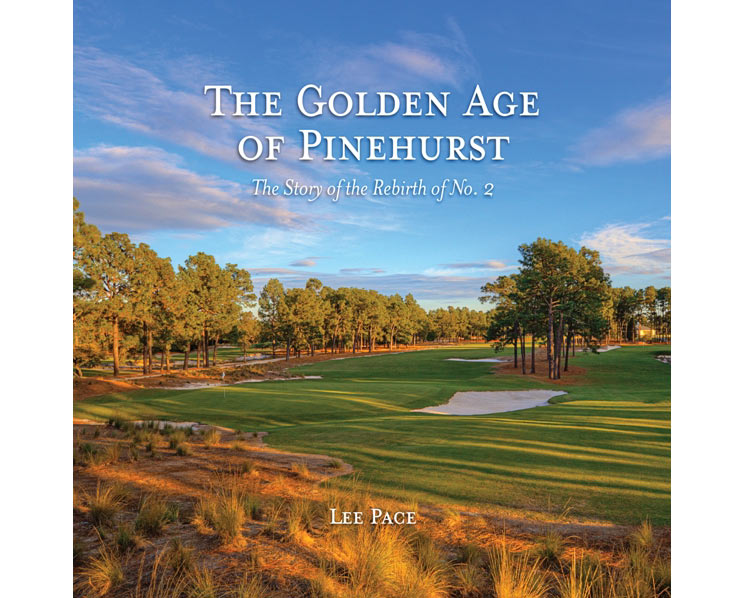 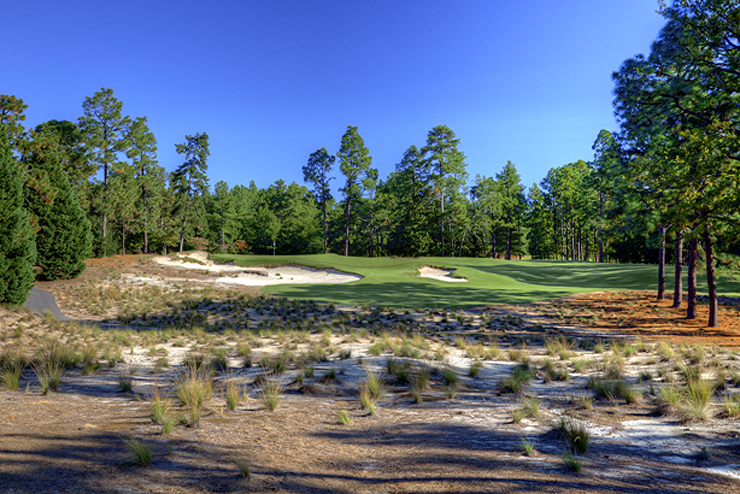 The scale and sweep of the left front bunker at the ninth hole was expertly restored by Coore & Crenshaw in 2010. It once again closely resembles its appearance in Ross’s later years. 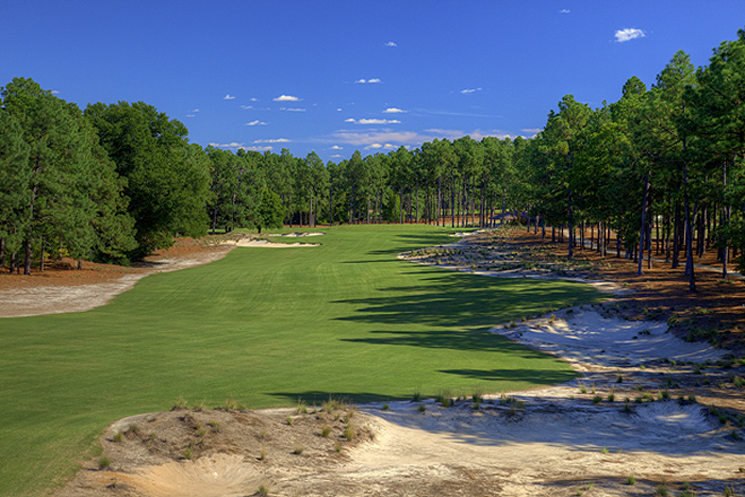 This elevated view down the long two shot eighth highlights the absence of anything linear. Featuring one of No.2’s most famous greens, will a professional meltdown here in 2014 like John Daly did in the 1999 U.S. Open?