David L Dobby is a Chartered Architect who had a very active business career practising as an Architect for 40 years. Throughout this period golf has been his safety valve and he played for many years to a low single figure handicap. Landscape design has always been a part of his architectural duties, designing most of the landscapes on his developments, and his understanding of landscape design has led to a passionate interest in the detailed design of golf courses. This is demonstrated by the painstaking analysis of holes that are part of the illustrations in two of the books written by him, ‘Royal Cinque Ports – A personal record’ and ‘Golf on the Kent Coast’. It was the writing of these two books that led him to a new career at the age of 58. When Foregolf Publications, the publisher of the second book, bought the monthly magazine The Golf Club Secretary and asked David to be his Editor, and for nine years this allowed him to combine his passion for golf with his work. As the publication expanded the role became more demanding and he retired from practising architecture five years ago. In 2002 he has stepped down as Editor to become the Consultant Editor, allowing for a younger man to take the reins. David has been a member of Royal Cinque Ports for 40 years and is now the Club’s Archivist and historian. The combination of an architectural background and a love of golf give him a unique analytical approach to his writing, in which he still active.

When was the Cinque Ports Club formed?

The first 9 holes were constructed in 1892 to a design possibly by Tom Dunn or by Ramsey Hunter but as the course was constructed by Harry Hunter, the first greenkeeper and professional, the final design is probably down to him.

When and who expanded it to eighteen holes?

The second 9 holes were completed in 1899 and were most probably designed by Harry Hunter, who was working on their construction for two years.

Cinque Ports hosted The Open in 1909. What person/architect deserves the most credit for the 1909 design upon which the Championship was contested?

The 1909 Open was played on the same course as that which was constructed in 1899.

How long was the course for that Championship?

The length of the course for the 1909 Championship was 6,581yds, 200yds longer than Hoylake, which was the longest of the existing Open Championship courses at that time.

How many of the same playing corridors and general green sites are in play today that were apart of the 1909 course?

In general terms 12 of the 1909 playing corridors still exist although there have been many changes in the shape, length and detail of the holes. The 1st, 2nd, 3rd, 5th, 16th, 17th and 18th are part of the original 9 and have changed very little.

Were any significant changes made to the course prior to hosting the 1920 Open?

The North end of the course was severely damaged by Military occupation during the First World War, consequently 5 of the holes, the 8th, 9th, 10th, 11th and 12th, were completely redesigned with the help of James Braid for the 1920 Open. It is possible that the current 9th hole was on the line of the original 8th but in those early days it was a par five and played to the left of the pivotal bunker. It is recorded that the green was guarded by the rushes that are now found in the hollow to the left of the fairway short of the bunker complex.

Like the other great U.K. links, Deal features humpy-bumpy terrain and is fully exposed to the elements. What in addition to those chief characteristics would make Darwin write, ‘Deal is a truly great course. I incline myself to think the most testing and severe of all the Championship courses’?

The back seven holes are without doubt one of the greatest tests of course management and shot making ability that can be found anywhere and these are usually played into the prevailing wind. However, when the wind is in the opposite direction it is not any easier, as whilst the holes are now more easily reachable in two, the greens have been designed for the prevailing wind. To hold the ball downwind in these greens is nigh impossible other than to the very best of ball strikers. 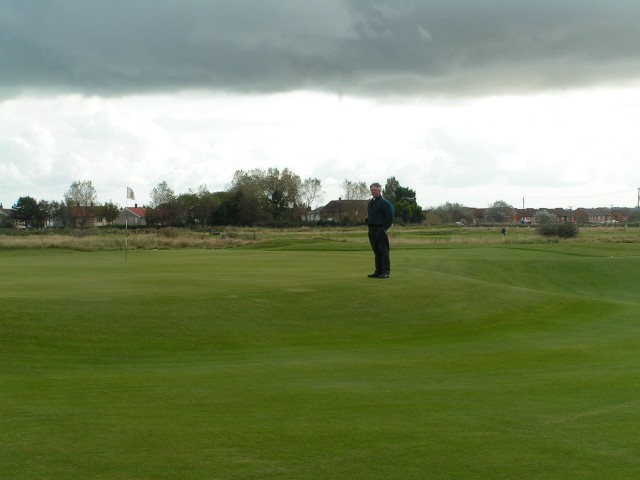 David Dobby stands at the edge of the raised 18th green at Deal.

What fate did the course suffer during World War II?

In World War II the course suffered further damage through occupation by the Military Authorities, with giant concrete tank blocks constructed from the sea embankment adjacent to Sandown Castle, across the course through the 1st green and inwards for about 1 mile. The 1st, 2nd, 3rd and 18th fairways were used for an assault course, 12 greens were surrounded by barbed wire, 3 greens were destroyed and the North end of the course was unusable.

How did the course regain form after the War?

Major Sir Guy Campbell was one of four experts called in to report on the damage to the course and make recommendations for reparation after the floods of 1938, the other three being John S F Morrison, Hugh Alison and Major C K Hutchison. After the report was accepted, Sir Guy was responsible for carrying out the recommendations that were completed in February 1939. However, it should be noted that the course was due to be used for the Open again in 1938 and John Morrison altered the course, including the redesign of the 4th hole, for that purpose. On completion of those works the course measured 7077yds and was the longest Open course in the British Isles. It is likely that much of Morrison’s design was included in the recommended reparations.

After the War Sir Guy was co-opted onto the Club’s General Committee and again restored the course, presumably to the same design as that formally agreed before the War.

Please comment on Deal’s green sites, ranging from the punchbowl 3rd to the 16th set upon a high plateau with a sharp drop off.

The greens of Deal are all difficult to access. This may be due, in many instances, to the greens being raised onto plateaux of varying heights. It may also be due to their extreme undulations that tend to throw the ball off if it is not placed in the right part of the green, but more often it is due to the undulation of the terrain immediately in front of the green, a part of the course that is so important in the bump and run game of a links course. In all cases it is imperative to be in the right place on the fairway in order to have a chance of hitting the green and staying there. Long straight positional driving is the key. 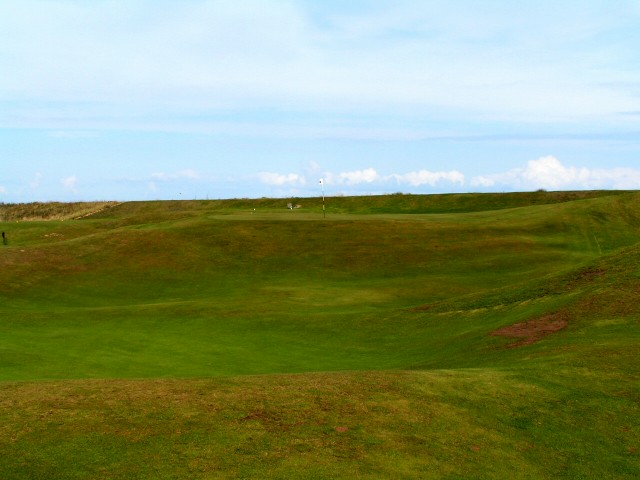 Deal's green sites are exceptionally varied. Pictured above is the bunkerless 6th green complex which has returned many a short approach well back into the fairway.

Sir Peter Allen famously wrote in 1968, ‘If I had one more round of golf to play on earth I would choose Deal as the links on which to play it.’ Has anything of significance transpired to the design of the course since he wrote that praise?

Since 1968, the construction of the sea wall, following the floods of 1978, shortened four of the holes, the 3rd, 7th, 9th and 11th. Recently, the Championship course has been lengthened by moving a number of the tees back and the course has been tightened from the tee for the longer drivers by relocating some of the fairway traps. Donald Steel was called in to advise on these alterations and he is shortly to return to add the finishing touches to subtly blend them into the landscape. There is also a move afoot to bring in some of the original teeing grounds into play on the 12th, 13th, and 17th holes.

What effect, if any, did the creation of the 1981 sea wall have on how any of the holes played?

The addition of the sea wall also changed the alignment of the 7th hole to its detriment. Without doubt the original 3rd, 7th, 9th and 11th holes offered more difficult drives from the original tees but fortunately the greens still present the same degree of difficulty as, apart from the 6th, they were unaffected.

What is Deal’s policy in regards to allowing overseas play?

We encourage golfers from overseas, both as green fee visitors and as overseas members. We have a category of ‘Overseas Life Members’ for those who live over 1,000 miles away; the cost of this is now $7,500. The cost of green fees for overseas visitors compares favourably with other Open Championship venues.

With the Chunnel an easy drive from Deal, what coursesin France would you recommenda golfer to consider?

There is a good choice, of which the best is Le Touquet, which is an hour’s drive from Calais or if you are looking for a Links course, Belle Dune, which is another half an hour further south of Le Touquet, This course has a great reputation although I have only played once and was not so impressed.

Le Touquet has two course La Mer, designed by Harry Colt, which is excellent and Le Foret, designed by H Hutchinson. There is also a five star Hotel at this venue known as Le Manoir. These courses do however get rather crowded by the British but not so crowded as Hardelot, which is a little nearer to Calais.

Hardelot also has two courses, the Dunes and the Pins. The Dunes is a modern course designed in 1990 by Paul Rolin. The Pins was designed by Tom Simpson and was, before it became so overcrowded, one of my most favorite courses.

Alternatively, if you are prepared to drive for an hour and a half from Calais in the other direction towards Lille, there are two wonderful courses at Bondues, one designed by Hawtree and the other by Trent Jones. These courses are not so well known by the British and are often empty, but they are a great test of golf.

As with all French courses the Clubhouses are usually shut on one day in the week and it is best to check in advance. They also have Bank Holidays that do not coincide with those in England and it is on those days that the French come out to play in numbers. These days must be avoided.