When and where did you first hear of the property that is now Cabot Links?

The then Minister of Tourism (who went on to become the Premier of the province) Rodney MacDonald was seated next to me at a dinner in the spring of 2004 and he spoke about a great site in his home riding of Inverness.  Later that same summer during a round at Highlands Links with their long-time pro Joe Robinson, I heard a great deal more about the promise of the site and came to see it for myself in December of 2004. 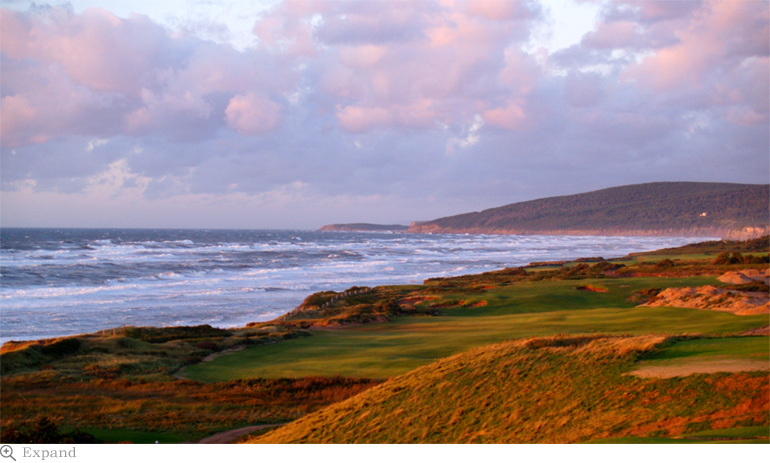 Much has happened since Ben’s first visit to Inverness in 2004, as suggested by this view looking across the fifteenth fairway!

What were your first impressions upon seeing the property?

It was a marvelous day with sunshine and a gentle breeze and aside from the obvious beauty of the land, I was struck by the great contours, which were not evident in the photos that I had been sent. The mile of ocean frontage along the sand beach was compelling, but the views in the distance up and down the coast were what really captivated me.

So what?! Other developers had seen the property and one even had Nicklaus Design do a preliminary routing. You had just turned twenty-five. What possibly made you think that you were the one that could bring a golf course to fruition?

In hindsight I am not exactly sure why it seemed like such a foregone conclusion that it was a great idea, but I was convinced it was. There is no doubt that Bandon and Barnbougle both gave me some evidence supporting the seaside golf model. 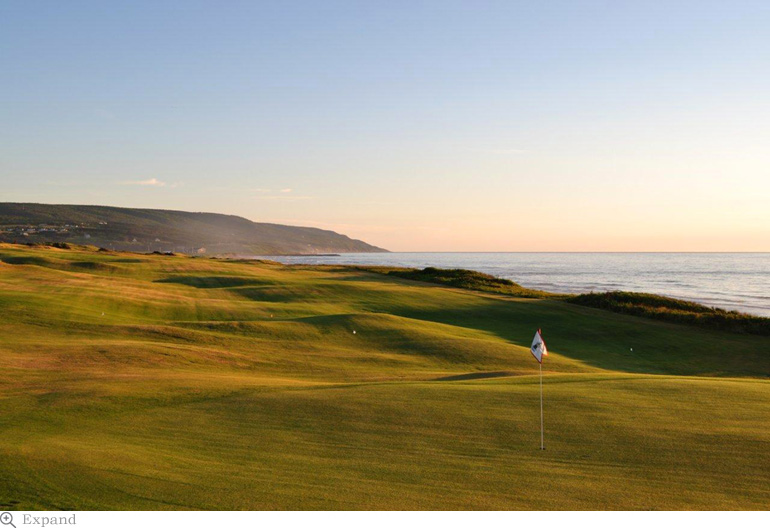 Though the coastline grabs the eye, the little humps and bumps and swales in the sixteenth fairway will also bring a smile to the face of those that like links golf.

What made you think that Cape Breton Island could support such a venture?

For over seventy years it has already been supporting Highlands Links, which is my favourite course in Canada. Cabot’s site was dramatically different than Highlands, but I thought it would be a great compliment to Thompson’s best work. Furthermore, having vacationed in Cape Breton several times, I was also convinced by the people, scenery and variety that this great island had to offer!

What were the next several steps?

Over the course of two years, the dozen pieces of property that make up the course were acquired. The town of Inverness had long sought the course and their passion and enthusiasm made the land acquisition possible and passed the baton to get the course built. The Cape Breton Growth Fund (a government development group) agreed to provide debt to the project and that paved the way for course to be built, assuming the equity could be found, which it was in the form of Mike Keiser. Obviously, Mike was a great blessing to the project.

Why did you select Rod Whitman?

I had known Rod for many years and had played his Canadian courses (Blackhawk and Wolf Creek) with him years ago. These rounds were critical in getting to know the relatively quiet Whit, who shared his enthusiasm for golf course architecture and had built the best modern golf in Canada. Knowing both Pete Dye and Bill Coore’s appreciation for him help further solidify in my mind that he was the perfect choice. Although it certainly was not the most obvious selection to some people, I have been even more impressed by the effort that Rod has put into the project both through the routing progress and in every day of construction when he has made Inverness his home.

You moved your family to Inverness so that you could oversee the development of the course on a daily basis. What has the support of the town and locals meant to Cabot Links as well as your family?

It was quite a transition from downtown Toronto to the outskirts of Inverness, but one we have all enjoyed. We have had two children who are proud Invernessers and three and half years on enjoy the community and its residents every day!

There is a world economic crisis in the fall of 2008 yet in the summer of 2009 while still in the height of a global recession, you had work press ahead. What gave you the confidence to proceed?

Play & Bookings at Bandon were bouncing back robustly, which made us think the downturn was a Recession, not a Depression.

Since you initial visit, you have been to the property numerous times. What has pleased you the most with the evolution of the design?

The rough shaping that Rod Whitman did on the site during the go-slow year of 2008 transformed a featureless, industrial acreage into an elegant dunescape. That was brilliant!

Talk about the evolution of the Double Green at Cabot. Was Old Macdonald (which opened on June 1st, 2010) an influence in any way?

At Old Macdonald, #5 & #10 greens were very close together, so we decided to “join” them into one immense and very sightly putting surface. The double green at Cabot evolved similarly. Actually, when we open, there will seem to be one giant greens-tees complex, with #11, #13, #14 and #2 greens knit together with #12, #14, #3 tees. 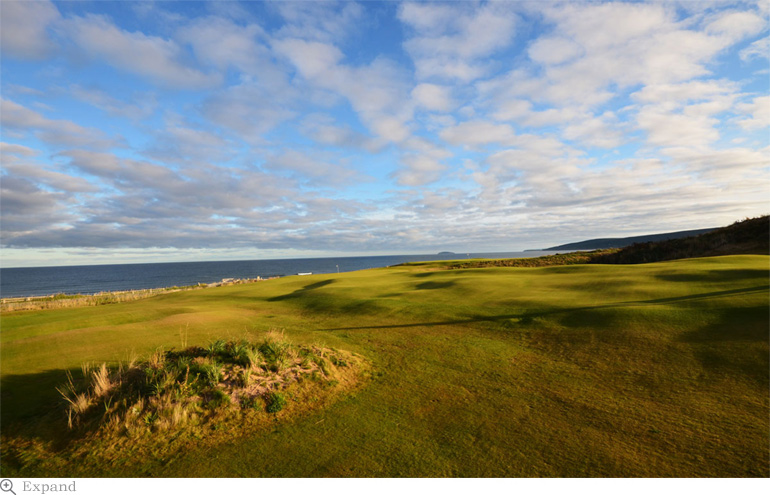 The 30,000 square foot Double Green. In the foreground is the putting surface to the 420 yard 13th hole while the 11th flag is seen closer to the water.

You have owned the Bandon Resort for nearly fifteen years. Have things that you have learned from that operation helped crystallize in your mind what is best for Cabot?

c. Replay rates that encourage a second round;

d. Walking only, with caddies;

e. All 4 courses, 3 minutes by shuttle apart; and

You have worked several times with Tom Doak as well as Bill Coore and their fine crews in the field. How was working with Rod Whitman? How does his approach differ from the other two?

All 3 design on the ground, bump by hump by swale. And all 3 spend the most time working out the routing to begin with. They are 3 peas in the same architectural pod.

Do the playing features of Cabot Links remind you of any particular course at Bandon? How does Cabot Links compare to the four courses at Bandon?

The topography is most like Bandon Dunes. The bunkers are like those by Doak & Coore. The greens are closest to Old Macdonald – ample.

I think if you live in Chicago or West, the 4 courses at Bandon win out. If you live in the Northeast, especially if Nova Scotia builds an airport in Inverness, 54 holes at Cabot over 2 days, 1 night is pretty compelling. And for those in Montreal, Toronto and Halifax, Cabot Links plus Highlands are Canada’s Best!

You own an additional parcel two kilometers up the coast on what you have referred to as the Pebble Beach site where cliffs plunge into the ocean. Now that Bill Coore has walked that property twice, what are your plans for it?

If Cabot Links does 20,000 rounds per year, it’ll make sense to build the Broad Cove site on 1 mile + of ocean front. 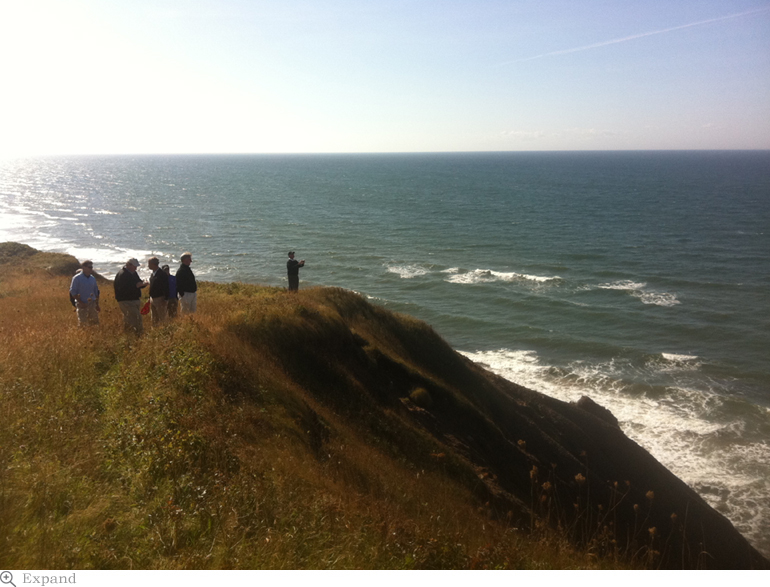 From a routing perspective, what were the biggest challenges? How did the wind factor in?

The property is quite a linear piece, and part of the challenge is to try to get a variety of directions that takes advantage of the wind. I wanted holes that could play into the wind, downwind, and cross winds, and getting the variety in the direction of play was a challenge given the linearity of the property.  I spent over 400 days on the property so I got to see it in all conditions, which was a big help in figuring things out. 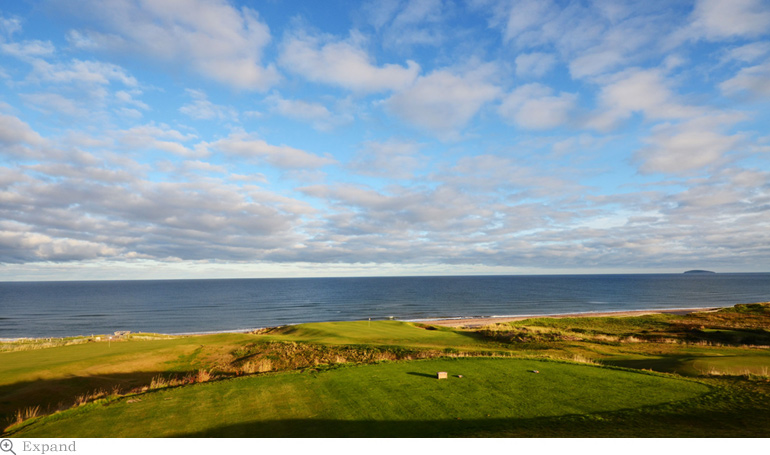 Cabot Links opened ten holes for play in July, 2010. Since then, every club from a driver to a flip wedge has been hit at the 110 yard 14th hole.

Actually, I think they’re going to be some of the best holes, certainly they all have the feel of the links. The ninth plays along the harbor and I imagine that is likely to be a crowd favorite. Because you can see the water from every hole, you still feel the ocean’s presence even on the inland holes. 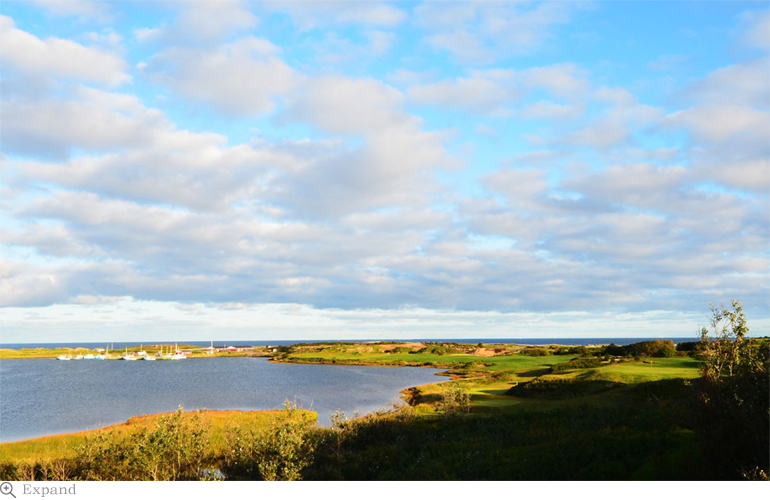 The ninth is a Cape hole with the backdrop to the green being a working harbour.

In terms of favorite holes, most people are likely to pick one of the six holes along the water or the Cape ninth. However, you have always said that you like the seventh. Is that you just being the mad scientist architect or is that truly a personal favorite? If so, why?

To begin with, I always liked how it laid out on the ground. It’s an uphill long par 4 that was going to play into the wind and it had the natural potential to play as a strong golf hole. Strictly from a golf prospective, it is not as scenic as the ninth, but I think both are really good golf holes.

Cabot Links is a walking only, public course. Did that in modify your design in any way? For instance, did you make the fairways broader or make other concessions that you might not have for a private course?

The focus was to build the best golf course possible, with wide fairways on a windy sight. Certainly we built wide fairways to take advantage of different directions of play into the green sites. Throw in varying wind directions and I think you’ll encounter a different course each and every day.

The grass scheme is 100% fescue throughout. What does that mean to the course’s playing characteristics?

The great old courses have fescue on the tees, greens and the fairways. The conditions will usually be firmer with fescue and that allows the course to play ‘fast.’ It’s easier to actually spin the ball off of the tighter lies too and it certainly helps the ground game options, given how you can roll the ball as opposed to the stickiness of blue grass. Given the Links nature this course, fescue was certainly the best choice.

You have been in the golf architecture field for over thirty years during which time you have worked for lots of owners. How was working with Mike Keiser?

Working with Mike was one of the best experiences I’ve had. He’s got a lot of golf knowledge, and his suggestions were always appreciated. We didn’t agree 100% of the time but he had some very good ideas that have been incorporated into the course. For example, the original double green concept came from Mike for the 11th and 13th holes. We were all walking around together and throwing ideas out and that one stuck. We built the ~30,000 square foot green, everybody liked it and it’s there today.